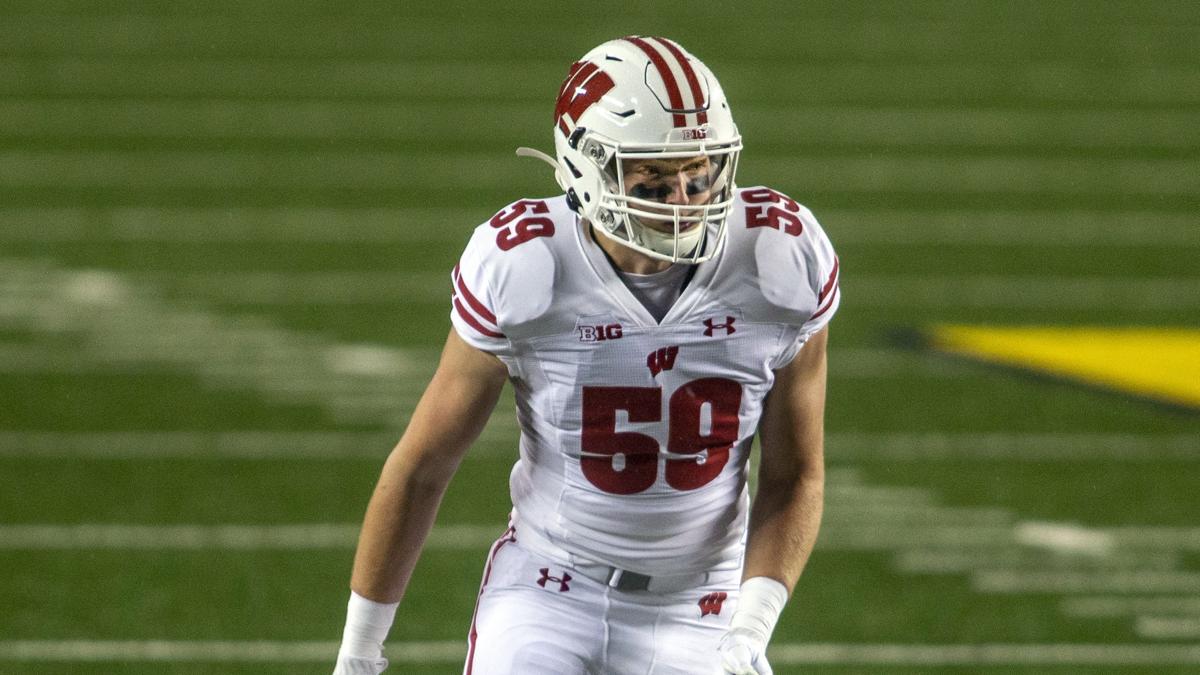 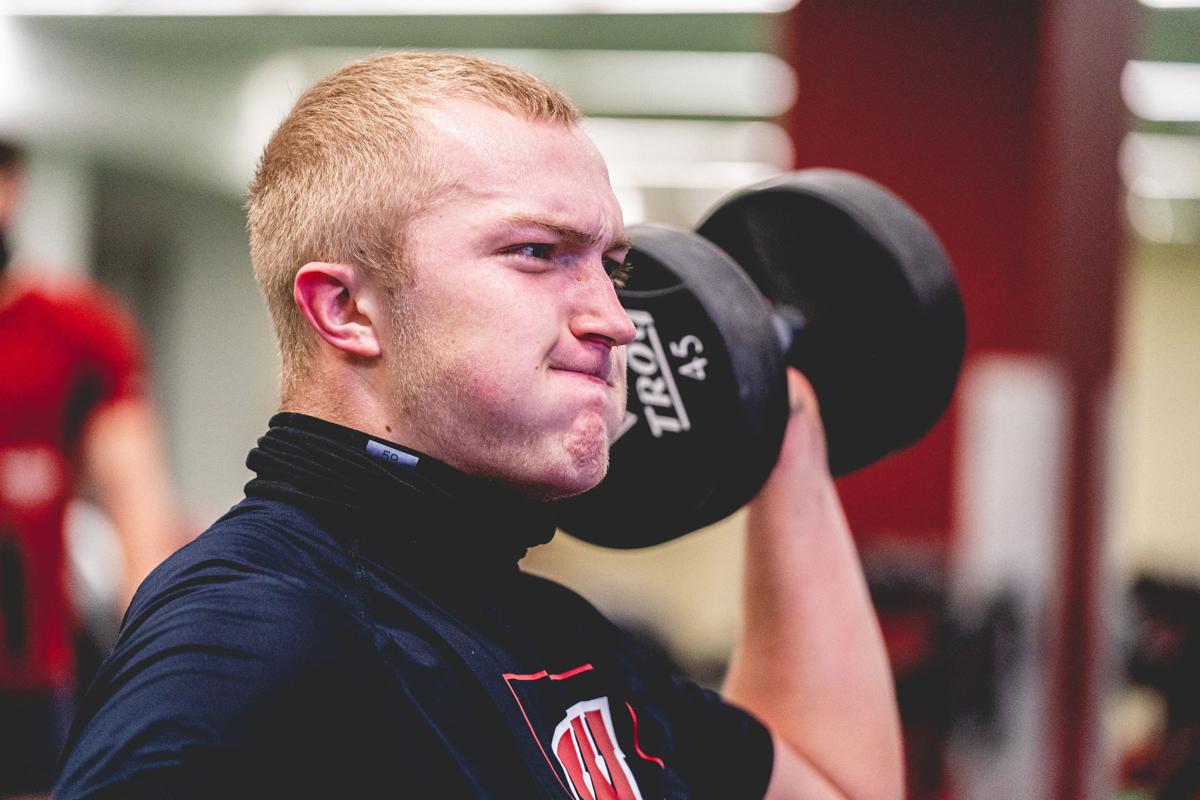 Sophomore Aaron Witt played in five games in 2020. He made three tackles, including two for loss in the Duke's Mayo Bowl victory against Wake Forest. 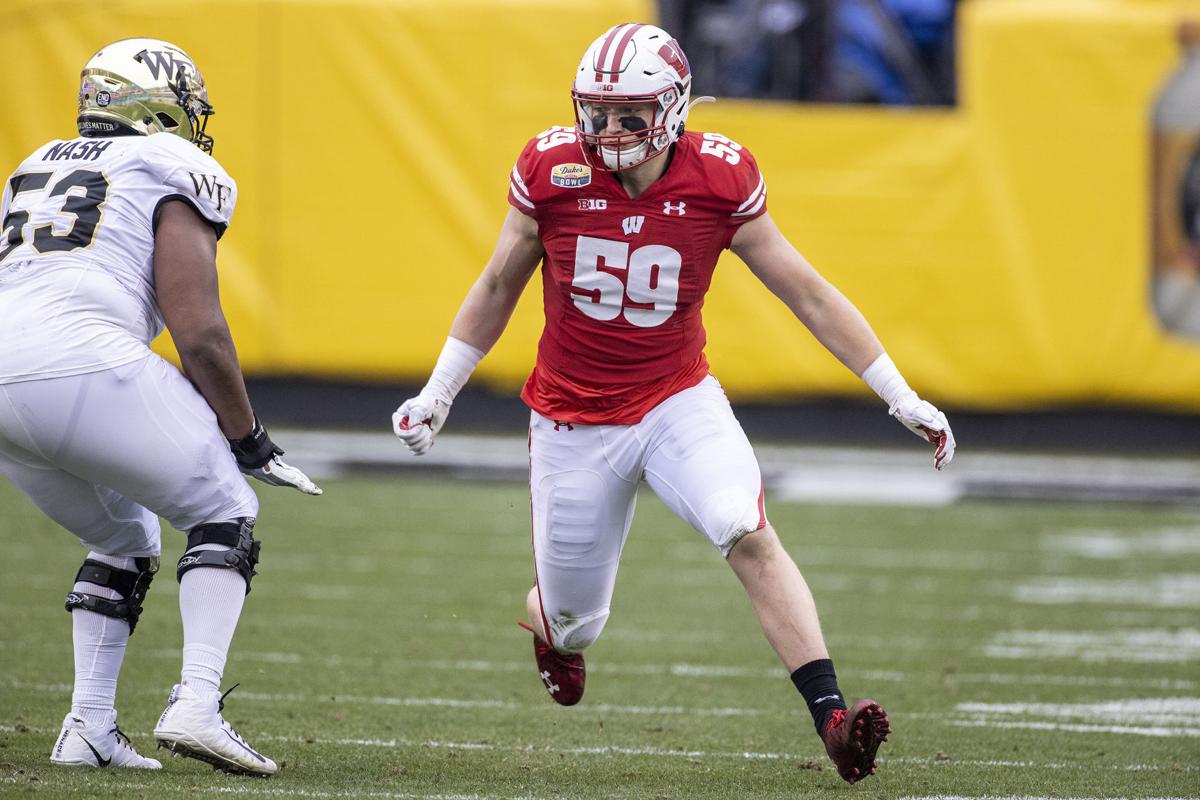 Outside linebackers at the University of Wisconsin agree on two things when it comes to sophomore Aaron Witt.

He’s a little unusual. And they like that about him.

Witt, a raw 6-foot-6, 248-pounder, found his way into five games last season. He mostly served as a special teams player early on but was able to crack the rotation on defense late in the year. Witt’s potential is sky-high, according to position coach Bobby April, and it’s showing in spring practices.

“Aaron’s built different,” April said Friday. “His mindset towards the game is a different factor. The guy is a guy you want in a street fight with you. He has no fear to put his face into the boiler and come out. He ticks different.”

Witt was a dominant defensive end as a prep player in Winona, Minnesota, leading the Winhawks to multiple state title game appearances, heights the program hadn’t seen in decades. He drew interest from a handful of Big Ten Conference programs and was at one time committed to Minnesota and then Iowa before UW — which was always his dream school, he said — made its push to land him.

He laughed a bit on a Zoom call Friday when he described his starting point, learning a new position at the college level.

“Starting in fall camp last year, I wasn’t very good,” Witt said. “I just had to keep chipping away, find ways to get better.”

What he lacked in skill he made up for in effort.

Teammates lauded his ability to continue pushing himself and making teammates work hard in their attempts to block him despite his technique not yet being honed.

“I think Aaron has a sense of how he goes through practice and just every day,” junior C.J. Goetz said. “I think physicality is one of his strong points. I think that’s something that I really admire out of him and something that he brings to practice — he always brings energy, brings juice and has that physicality to him.”

Witt made a tackle in the win over Minnesota last season and had a pair of tackles for loss to help UW top Wake Forest in the Duke’s Mayo Bowl. One of those plays was a strip-sack in the second half, which Witt called the first impact play of his college career.

Witt’s height and size is a rarity for the outside linebacker position and it gives him some advantages, April said. His long arms naturally give him separation from blockers and he’s able to perform different types of pass-rush moves because of that space. The flip side is that long legs make his first step — a crucial component to a pass rush — a bit slower.

April also said Witt’s working to improve his pad level coming off the ball, a significant part of the transition from a hand-on-the-ground lineman to a stand-up outside linebacker.

“I go haywire sometimes with my footwork that puts me in bad positions and football’s a game of leverage,” Witt said. “So being 6-6 is nice, having long arms is nice, but (if) the guys against you are getting lower than you, being able to drive you, no one cares how long your arms are if you can’t hold your ground.”

Because they both play the same boundary-side linebacker, Witt gravitated to senior Noah Burks, who has been the starter for the past two seasons. Burks’ example of how to prepare and guidance of how to take on blockers, especially in the run game, were impactful.

“I give a lot of credit (for) my development to Noah because he’s taught me so much,” Witt said.

Burks said he sees the intensity and passion to improve in Witt on and off the field.

“Witt’s a different guy, for sure. He’s got that Minnesota blood in him,” Burks said with a smile. “He’s probably one of the easiest guys to talk to, a lot of fun to be around. I think all those things just kind of like also shape him as a football player.”

April said Witt’s attitude is exactly what he wants in a player.

Nick Herbig, a sophomore and the starter at field-side outside linebacker, expects Witt to be a force this fall.

“Man, Witt’s a dog,” he said. “He doesn’t always get his job done in the prettiest way, but he gets his job done. No matter what, he’s scrapping, clawing, he’s fighting every rep.

“I’m really impressed with the way Witt has come along; he came a long way. And he’s going to be a great attribute to our defense this year.”

April said redshirt freshman Kaden Johnson has been out of spring practices due to a hamstring injury, but the team hopes he’ll be able to return in a week … Burks (COVID-19 protocol) and senior Izayah Green-May (undisclosed injury) also have not practiced yet this spring. UW is not releasing a full injury status report this spring.

The University of Wisconsin football team's schedule got a tweak on Friday.

Sophomore Aaron Witt played in five games in 2020. He made three tackles, including two for loss in the Duke's Mayo Bowl victory against Wake Forest.