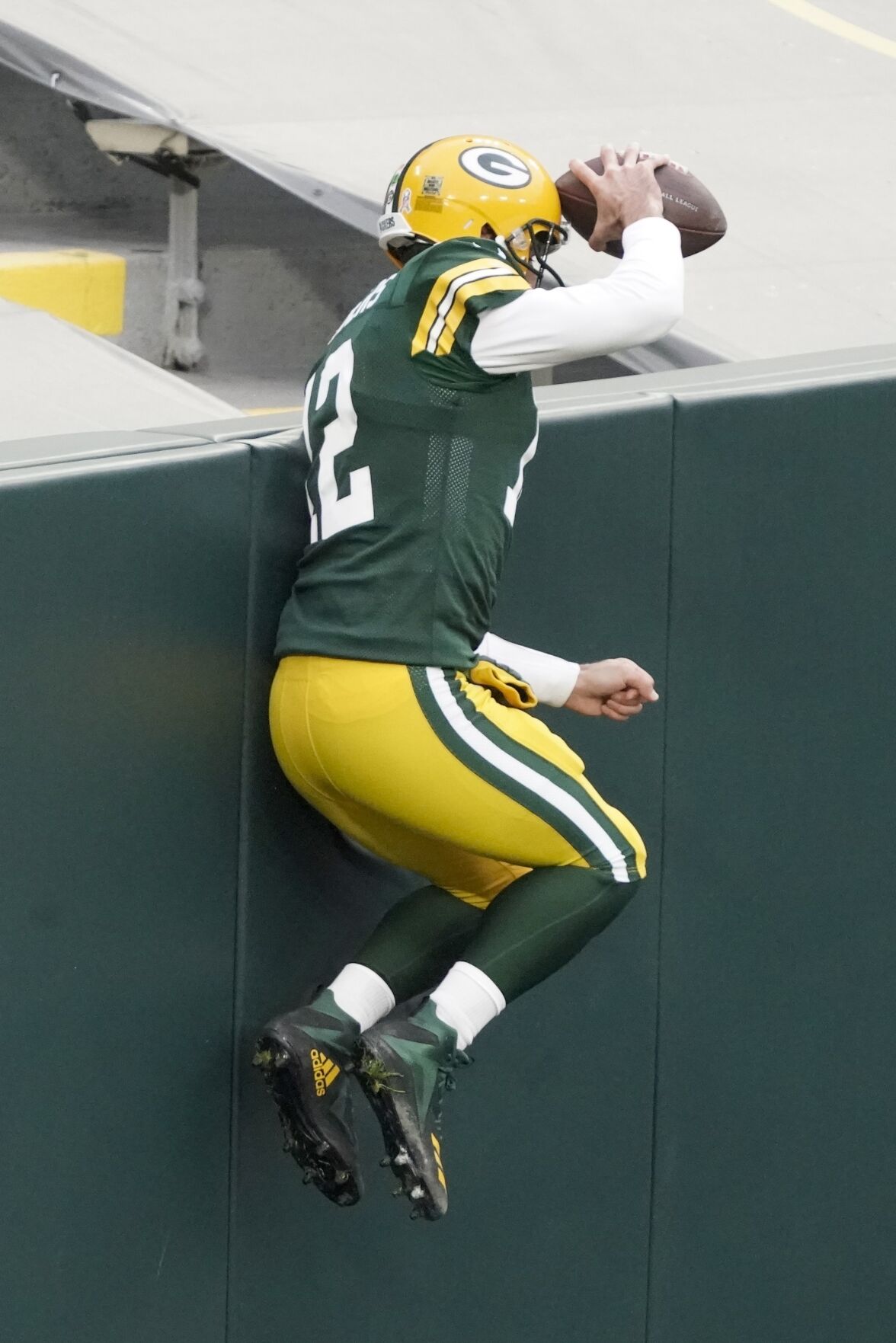 Packers quarterback Aaron Rodgers creates his own touchdown celebration during the Nov. 15 victory over the Jaguars at empty Lambeau Field. 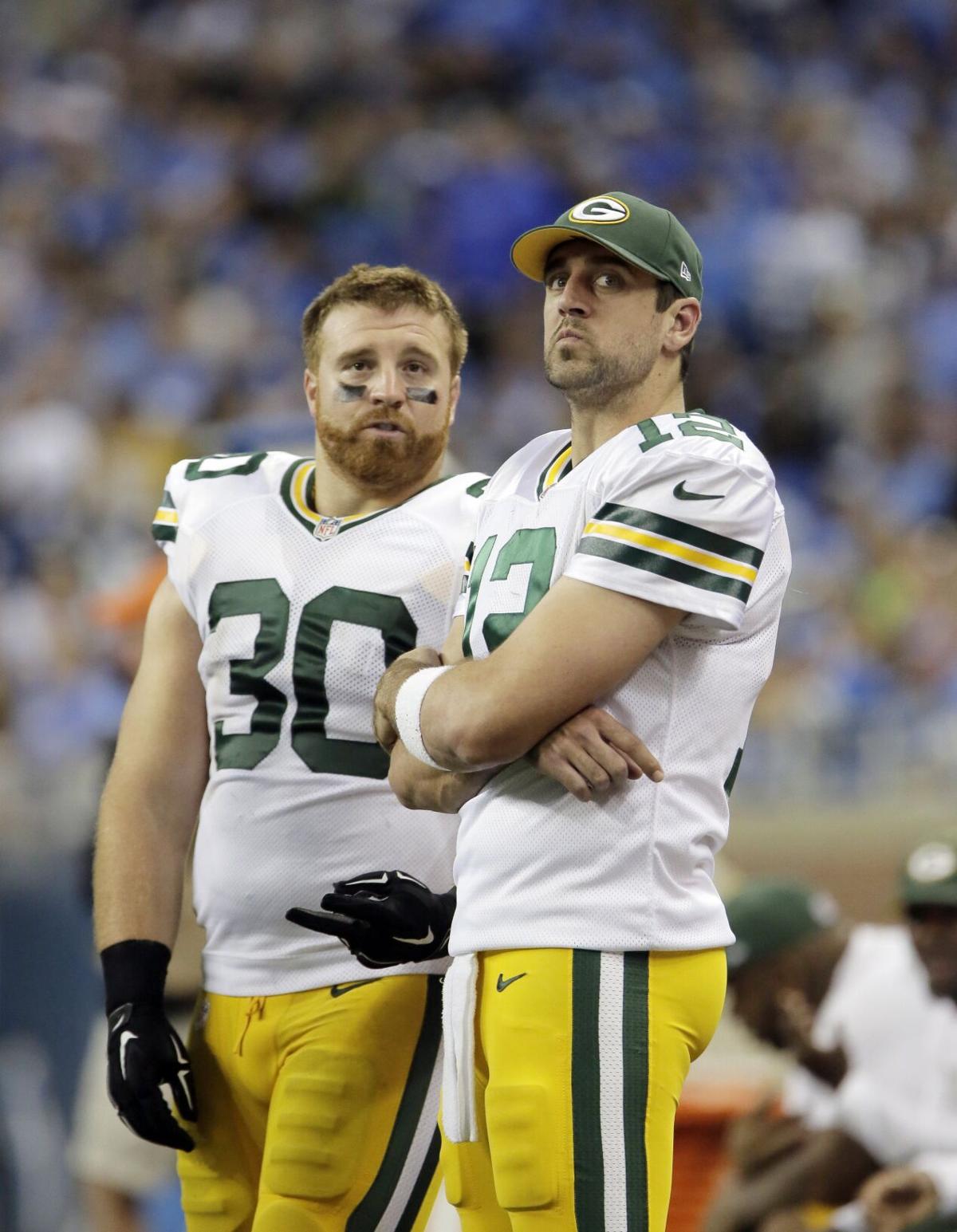 Former fullback John Kuhn and quarterback Aaron Rodgers were Packers teammates from 2007-15, winning Super Bowl XLV together after the 2010 season.

As the Green Bay Packers enter the home stretch of the 2020 regular season, they do so with four of their final six games at home — starting with Sunday night’s prime-time NFC North matchup with the reeling Chicago Bears.

But given how lethargic Rodgers’ team has looked at home this season with no fans in the stands at Lambeau Field, the Packers’ home-field advantage has been negligible. At 7-3, the Packers are still very much in the hunt for the NFC’s No. 1 playoff seed, which comes with a first-round bye and home-field throughout the postseason — whether they can take advantage of it or not.

And earlier this week, team president/CEO Mark Murphy left open the possibility the stadium will host fans for the final two home games of the regular season — though the closest the Packers will come to having a “crowd” on Sunday night or on Dec. 6 against Philadelphia will be the 500 or so employees and their families who’ll be allowed into the stadium on an experimental basis. (The final two home games are Dec. 19 against Carolina and Dec. 27 against Tennessee.)

So Rodgers has been racking his brain for ideas on how to pump up the energy level inside the stadium while the stands are empty. And he thinks he knows just the man for the job.

“Well, I see John Kuhn in the stands,” the Packers quarterback said of his longtime teammate, who now serves as the sideline reporter — or, in the age of COVID-19 social distancing, bleachers reporter — for the Packers Radio Network. “I’d like to get him going a little bit — whether he needs to take his shirt off, (or) get on the Jumbotron, or get ‘The Wave’ going.”

Desperate times call for desperate measures, and given the sanitized environs the Packers have been playing in, Kuhn, who played in 154 games (including playoffs) and went to three Pro Bowls during his nine seasons as the Packers’ fullback, is ready to answer the call.

“I’d sit shirtless with paint on my chest for the whole game if it would help the team. Obviously, that would been to be excused by the Packers since I will be broadcasting live,” Kuhn said with a laugh this week. “But I will confirm that these circumstances are brutal to try and play in. It would be incredibly difficult to have the same excitement (as a player would have under normal circumstances) throughout these games. I almost feel like the Packers would be better off on the road in the playoffs, as that is a natural environment for teams to feel all alone.”

Alone is how Kuhn has felt in the stands. Equipped with a mobile radio unit, he sits in a stadium bowl with a section essentially to himself. The only other people who’ve been in the stands with him have been a handful of credentialed photographers, a TV camera crew or two, and the sideline reporter from the TV broadcast team.

“I’d say a total of 12 of us in the bowl,” Kuhn said. “It’s not that weird for me, because I’ve been in a ton of stadiums before without fans. But I’d say I’ve gone from almost feeling sad the first game to the point where now I feel like Kevin McCallister in ‘Home Alone,’ like I have the run of the place.”

After announcing the team’s decision to allow employees and their families to attend Sunday night’s game, Murphy framed it as something of a test-run for allowing ticketed fans at the end of the season. The challenge, of course, is the way the Green Bay and Brown County COVID-19 positive cases have been spiking in recent weeks.

“Obviously, this has been a challenging time for all of us. First and foremost is the safety of our team, our players and our employees, as well as the community. We don’t take this stuff lightly in terms of being able to have people in the stands,” Murphy said. “We’ve seen other teams have implemented these protocols and had success, and we’re very confident in our operations.

“Obviously, it’s an outside venue. There’s a big difference between outside venues and indoors. When you look at it from the big picture, we’re going to be at less than 1 percent of our total capacity (on Sunday night).

“This is an opportunity to model good behavior. You can have, especially outdoor events like this, in a safe way. That really was key. We all need to take this virus seriously. I think there is a little bit of an attitude of, ‘So what? It’s no different than the flu.’ You talk to people that have had it, health-care workers that are under siege in terms of dealing with it, and it really gives you a sense of how serious it is. We take this as a good way to model proper behavior.”

How much of an impact such a small group of fans can have remains to be seen, though Rodgers said he told coach Matt LaFleur he’d like to see the stadium operations staff do all the usual game-day activities as the team would with a full house of nearly 80,000. If there’s even 500 fans in the stands, maybe that will happen and the stadium ops crew will give Rodgers’ ideas a try.

“I told Matt, I want to see ‘Roll Out The Barrel.’ I want the beer races. I want ‘Sign, Sign, Everywhere A Sign.’ I want ‘YMCA.’ I want the favorites,” Rodgers said. “I don’t know why we’re shying away from some of those. But hey, I’m just one man.”

But he’s not the only one who has noticed the lack of energy on game day. While Rodgers was critical of the team’s engagement level in a Nov. 1 loss to the Minnesota Vikings, LaFleur vented about his team’s “juice” in a Nov. 15 win over Jacksonville, though he later walked back those criticisms and said he might have overreacted in the immediate aftermath of the game.

“Maybe it’s just me; I haven’t talked to a lot of people about this. But I think there’s a certain expectation level when you’re at home, especially for the guys that have been here,” LaFleur said. “Just in terms of what you expect when you’re at home and you have all the fans around you and cheering for you, whereas when you go on the road you don’t anticipate that. You feel like it’s just us in this locker room.

“We’ve got to do a good job of just making sure that it doesn’t matter where we play. Our standards and our expectations and our energy (must be) consistent, the same, whether we’re home or away.”

Asked if he had any ideas, LaFleur replied, “I think everybody is looking at everything in terms of what we can do to just provide that spark, provide that juice.”

Rodgers has commented after several road games with fans that those games just felt different. The biggest crowds the Packers have seen this season were at Tampa Bay (15,540), at Houston (12,618) and at Indianapolis (12,495). There were no fans at Minnesota or San Francisco, and only 748 fans at New Orleans.

“It was great,” Rodgers said following the loss to the Colts. “We’ve missed fans, we really have. We’ve missed them at home. We’ve had some on the road in a few of the stadiums, but it’s been a different year. There’s nothing like that energy of the fans. ... It was pretty awesome hearing the ‘Go Pack Go!’ chants and seeing all the green and gold in the stands. There’s nothing like seeing our fans travel. (Playing the Bears) will be weird and strange, just like it is every time we play at home without fans. But it was really good to see some Packer fans on the road.”

Perhaps the place the Packers have missed fans the most has been on defense. The much-maligned unit certainly could use some help, even though visiting teams have scored just 79 total points in four games.

“It’s kind of weird. I don’t know. I don’t know if it’s because the fans are at the other games or what,” nose tackle Kenny Clark said. “But it’s something that we’ve got to get fixed. We’ve got to be more consistent. There’s times where we’re looking real good and we’re hitting on all cylinders, playing good football, and there’s times where we hit that lull and (the offense) will be driving up the field. We’ve got to get that fixed. Don’t know what we’ve got to do, but I’m sure we can get it figured out.”

Marquez Valdes-Scantling on moving on after fumble: ‘I can take the good days with the bad days’

Marquez Valdes-Scantling's costly fumble in Sunday's overtime loss to the Colts came one week after his career-best game.

Green Bay Packers fumble away opportunity to prove themselves, falling to Indianapolis Colts in OT

The Packers blew a two-touchdown halftime lead, turned the ball over almost as many times as they had all season, rallied to force overtime in the final 2 minutes, and ultimately lost because of a fumble in OT.

While Packers coach Matt LaFleur said after Sunday’s 34-31 overtime loss to the Colts that his fourth-quarter fourth-and-1 play call had not been a good one, he probably was simply saying that based on the result.

Packers quarterback Aaron Rodgers creates his own touchdown celebration during the Nov. 15 victory over the Jaguars at empty Lambeau Field.

Former fullback John Kuhn and quarterback Aaron Rodgers were Packers teammates from 2007-15, winning Super Bowl XLV together after the 2010 season.