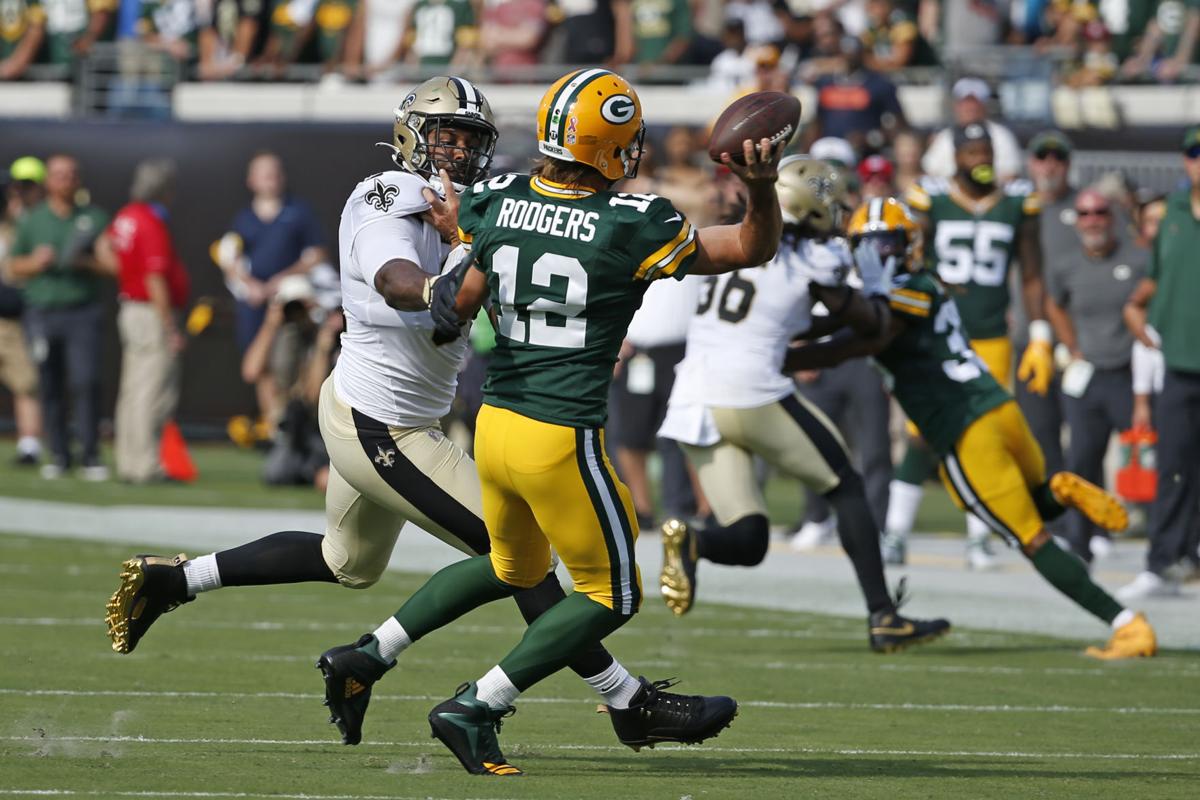 Packers quarterback Aaron Rodgers is hit by Saints defensive end Cameron Jordan as he releases a pass during the first half Sunday in Jacksonville, Fla. 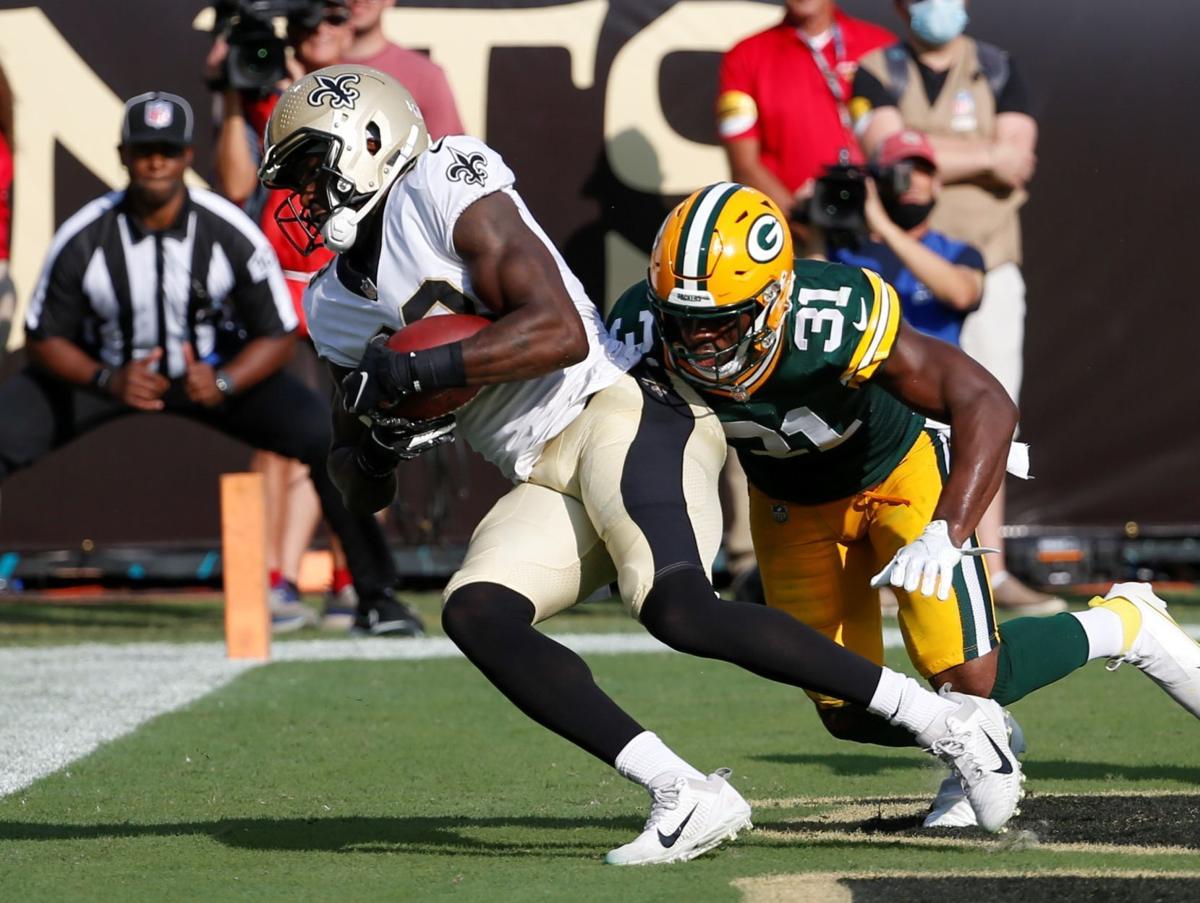 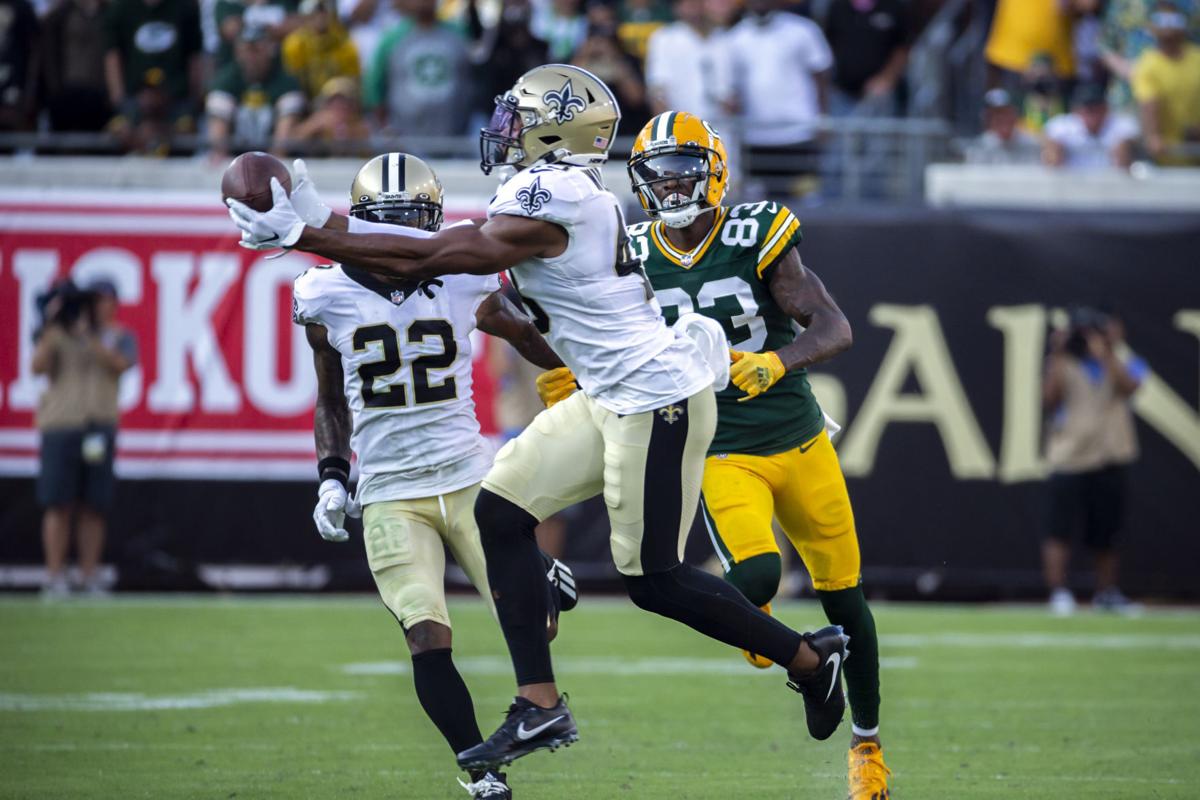 Saints free safety Marcus Williams intercepts a pass in front of Packers wide receiver Marquez Valdes-Scantling during the second half.

To understand just how spectacularly awful of a day the Green Bay Packers defense had during the team’s season-opening 38-3 embarrassment at the hands of the New Orleans Saints, consider this: The one time that unit did something right, even that went horribly wrong in Jacksonville, Florida.

That moment came with 47 seconds left in the third quarter, and the team already in a 24-3 hole. As bad as first-year defensive coordinator Joe Barry’s unit had been for most of the day — and as ineffective as the Aaron Rodgers-led offense had been when it had the football — a miraculous comeback probably wasn’t in the offing.

Jim Polzin: Here's what went wrong in the Packers' eye-opening loss to the Saints in their season opener

Nevertheless, if there was any reason for hope, it evaporated when safety Darnell Savage’s deflected interception in the end zone was nullified by a highly questionable roughing-the-passer flag thrown on outside linebacker Za’Darius Smith for his hit on Saints quarterback Jameis Winston. The penalty not only erased the turnover and gave the ball back to the Saints, but two plays later, Winston threw an 8-yard touchdown pass to Juwan Johnson to make it 31-3.

“I was right there, and it looked like a clean hit to me,” defensive tackle Kenny Clark said. “It was definitely a hard hit, but I felt like he was on target, he hit him with his shoulder, and I don’t think he landed on him. It was definitely a tough call at that moment of the game, but it is what it is, and we’ve got to live with it.

“But that play didn’t change anything with the game. Just the whole defensive performance today wasn’t good enough — period.”

Jim Polzin: Gut check time comes early for a Packers team with eyes on a trip to the Super Bowl

And that was the real bottom line. The Saints outgained the Packers 322-229; they held the ball for nearly 22 of the 30-minute first half; they converted touchdowns on all four of their red-zone trips; and they ran the ball for an eye-popping 171 yards. In fact, they were so productive that Winston, despite throwing five touchdown passes, only threw for 148 yards and completed just 14 of 20 passes. But he didn’t throw an interception, and he finished with a passer rating of 130.8.

“They’re a great team, but we have to look at ourselves. We want to make them beat us, not beat ourselves,” safety Adrian Amos said. “Obviously, you see the score, there’s a lot that went wrong.”

Jim Polzin: Aaron Rodgers and the Green Bay Packers have one last chance to be Super

Indeed. And the defense’s poor showing was especially problematic in a game with kickoff weather conditions of 83 degrees and 56% humidity that the defense could not get off the field. When the Green Bay offense got the ball for the third time, the Saints had run 39 offensive plays to the Packers’ 12.

Asked if in retrospect it might have made sense for the defensive starters to play at least a few game snaps together in the preseason with a new system and new defensive coordinator, Amos replied, “We’re not going back and playing, so we have to move on.”

But it wasn’t just on the defense. Rodgers & Co. had a horrendous day, too — one that got so bad that Rodgers’ heir apparent, Jordan Love, took over at quarterback with 10 minutes, 46 seconds remaining in the game.

“They obviously came out with a lot more intensity than we did. They were the hungrier team and that’s disappointing, especially when you have a team like we feel we have,” head coach Matt LaFleur said. “Ultimately, I did a pretty bad job getting (us) ready to play.”

Energy? Sure, Joe Barry has plenty — but will the Packers’ defense be any good with him in charge?

Rodgerscompleted just 15 of 28 passes for 133 yards with no touchdowns and two interceptions for a quarterback rating of 36.8, his fourth-lowest single-game rating in a game he started. He had a 36.8 rating in one other game in his 17-year NFL career: When he played in mop-up duty of a 48-3 blowout loss in Baltimore as a rookie in 2005.

In winning his third NFL MVP award last season, Rodgers had 14 games where his quarterback rating was over 100, and only one game in which his rating was lower than 91: When he completed just 16 of 35 passes for 160 yards and threw two of his five regular-season interceptions in a 38-10 loss at Tampa Bay (35.4 rating).

Asked if the offense, which was the No. 1 scoring unit in the NFL last year, might’ve been full of themselves coming into the game, Rodgers replied, “Yeah. I think so. I think there’s probably some of that. We probably felt like we were going to go up and down the field on whoever they had out there. And that obviously wasn’t the case today.”

For Aaron Rodgers and Davante Adams, Packers’ ‘The Last Dance’ season requires ‘right mindset’ — for everyone

In the first half, the offense had the ball just three times. After converting a fourth-down to keep the drive alive to start, Rodgers threw back-to-back incompletions to force a punt to end the first drive. On the second, an 11-yard sack on first down set the stage for another punt.

By the time the Packers offense got the ball a third time, the team was already in a 17-0 hole and the Saints had put together back-to-back 15-play touchdown drives that ate up a combined 17:51. That third series began with 1:07 left in the half and ended with Mason Crosby’s 39-yard field goal as the clock expired — for the Packers’ only points of the day.

Grading the Packers: Offense, defense, coaching get failing marks after loss to the Saints

“I felt like our energy was a little bit low. We just kind of needed something to get going, (because of the) long drives on their side and us not executing (on offense),” Rodgers said. “It’s 17-0, and we’re in 2-minute mode on our third drive of the first half. We just didn’t execute very well.

“This is a good kick in the you-know-where, which will hopefully get us going in the right direction. There’s not much you can say other than (that). They beat us, they played way better than us. We played bad, I played bad. … This is hopefully an outlier moving forward. We’ll find out next week.”

Photos: Packers stumble out of the gate as Saints dominate season opener

Check out photo galleries from every game of 2021 from the preseason through the end of the regular season and the playoffs.

Packers quarterback Aaron Rodgers is hit by Saints defensive end Cameron Jordan as he releases a pass during the first half Sunday in Jacksonville, Fla.

Saints free safety Marcus Williams intercepts a pass in front of Packers wide receiver Marquez Valdes-Scantling during the second half.