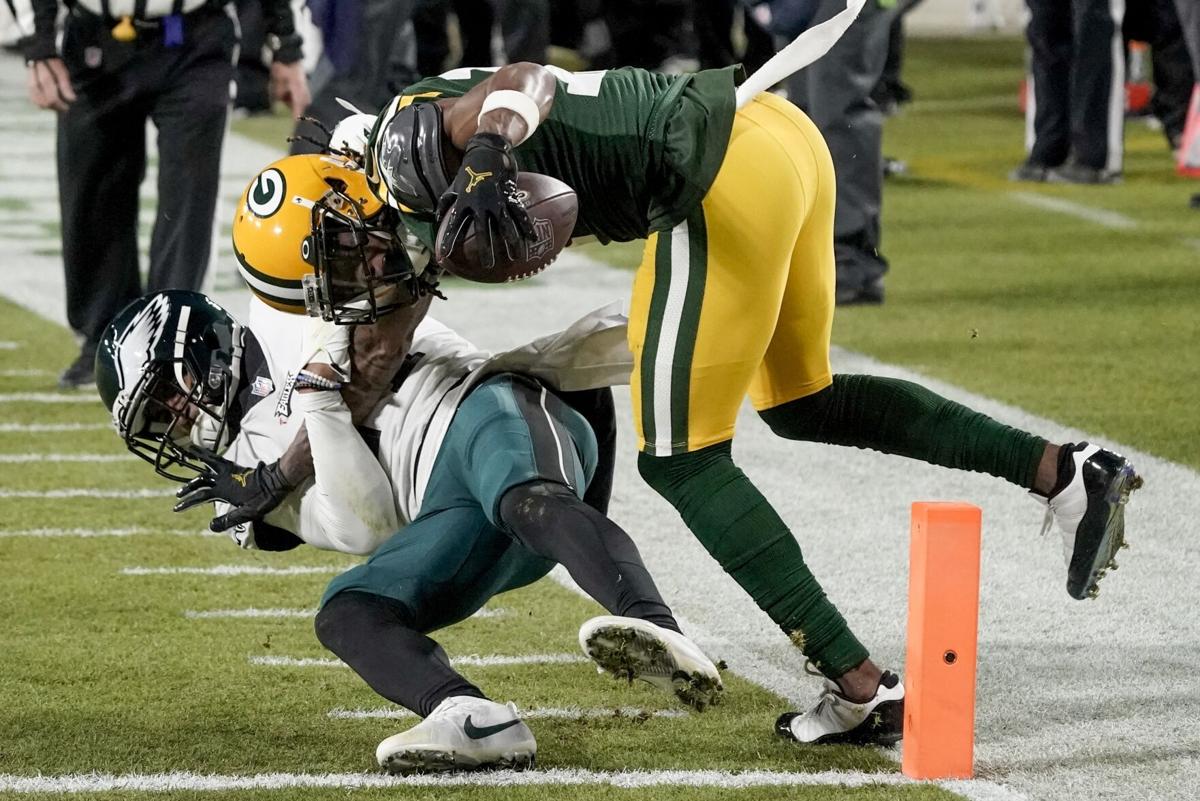 Packers' Davante Adams catches a 9-yard TD pass despite the defense of Eagles' Darius Slay during the second half Sunday at Lambeau Field. It was Aaron Rodgers' 400th career touchdown throw. 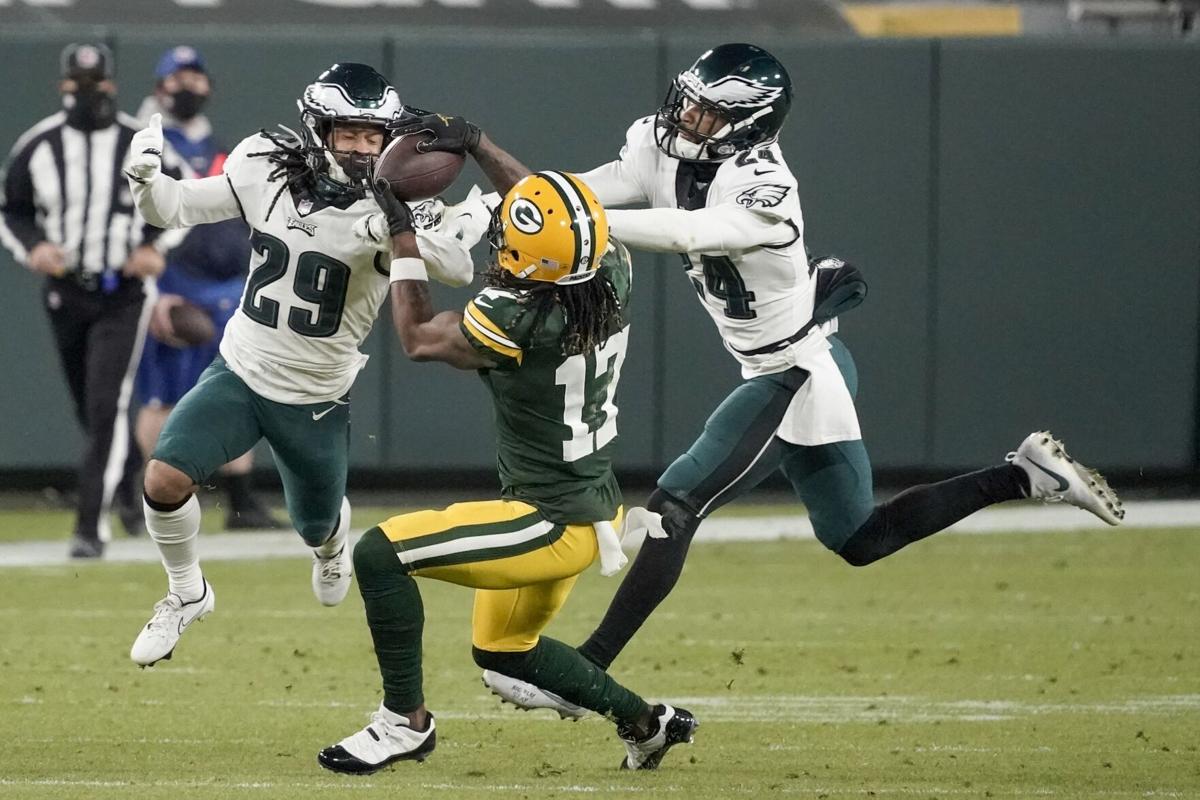 “I’m going to keep it short and sweet with Davante,” Rodgers insisted during his usual Wednesday Zoom call with reporters. “Because I’ve talked a lot about him.”

But 139 more words and — with a couple of thoughtful pauses — 56 seconds later, Rodgers was still talking.

“He is a phenomenal player. He is as good as they come. I wouldn’t want to throw to anybody else,” Rodgers began. “I have so much love and respect for him as a person — how he carries himself, his demeanor, his competitiveness, his focus, the plays that he makes on the field, the way that he communicates with me, the respect that he shows me, the respect that he earns from myself and our team every single day.

“He is one of a kind. Very unique player, unique person, and I am so thankful to have him on our squad. I have his back 100 percent in everything that he does and says. He’s a man of his word, he’s a man of high integrity and high class.

“And I’m better because of him — as a person and as a quarterback.”

And the Packers, with four games left in the regular season, are better because of a healthy, dominant Adams.

He enters Sunday’s game against the Detroit Lions at Ford Field with 84 receptions for 1,029 yards and 13 touchdowns in just 9½ games, having missed two full games and the second half of the Packers’ 42-21 victory over the Lions at Lambeau Field on Sept. 20 with a hamstring injury.

If he stays healthy for the final four games and stays on his current pace based on his 10-game numbers, Adams will finish with 117 receptions for 1,440 yards and 18 touchdowns — all of which would constitute career bests.

While Rodgers has put up the kind of numbers that rival his MVP-winning stats of 2011 and 2014 — he enters Sunday having completed 286 of 415 passes (68.9%) for 3,395 yards with 36 touchdowns and four interceptions for an NFL-best 118.5 passer rating — his next-level connection with Adams has been critical to his productivity. Rodgers has targeted Adams on 26.7% of his attempts and had Adams on the receiving end of 29.4% of his completions, while Adams has accounted for 30.3% of his passing yardage and 36.1% of his touchdown passes.

That’s in part because Packers coach Matt LaFleur, the offensive play-caller, and his coaching staff have given the duo the opportunity to help shape the game plan because of their connection.

“They’ve had a long history with one another, and there’s so much trust from everybody with those two guys,” LaFleur said. “They’ll talk about some things, and they’ve got a lot of input on what we decide to do as an offense just from some of the concepts that we run.

“We always want those guys’ input. That’s what you do with great players. They’re able to go out there and execute at a high, high level. It’s not just like every now and then. It feels like it’s every game. Especially when you know the ball is going to get thrown Davante’s way and he’s able to still go out there and produce.”

Adams insisted he doesn’t think about what his numbers would be without the time he missed with the hamstring injury — “I don’t like to live in that world a lot,” Adams said, “(but) obviously if I would have been in there, we know that the numbers would be better” — but it’s clear he has elevated his play.

It’s also clear that while LaFleur’s offense is predicated on scheming receivers open — even ones with less natural talent than Adams — there has been a greater concerted effort to get him the ball this season, even though it was a priority last year, in LaFleur’s first season as head coach, and in 2018, in Mike McCarthy’s final season in charge.

“Even in ’18, we didn’t have those types of games to start off the season to where you let (everyone) know that when I’m targeted, when I have opportunities, it translates to the offense doing well,” said Adams, who missed four games with a painful turf toe injury last season and finished with 997 yards in 12 games, the second time in his career he’d fallen 3 yards shy of the 1,000-yard mark. “I think that that’s been a little bit of a change as far as the urgency and the awareness to try and get me involved early. And, any game that we do that, I feel like we’re able to move the ball and it results in a great game for us as a team as a whole.”

The Packers placed three players on injured reserve: running back/returner Tyler Ervin (foot/ankle), safety Raven Greene (shoulder) and defensive lineman Billy Winn (triceps). All three must miss the next three games in accordance with the NFL’s adjusted IR guidelines for this season, though it’s unclear if any of them will be back this season

“We’re going to miss Billy. Hopefully, he gets back soon. He did a hell of a job,” Montgomery said. “He came in, he was in good shape, he picked up the system pretty well and gave us some quality reps. I hope Rush will do the same thing. He’s a smart kid. Had a good week last week. I anticipate him being in a similar role to Billy.”

The only two players remaining on the active roster who did not practice Wednesday were wide receiver Equanimeous St. Brown and tight end Jace Sternberger, who are both in the concussion protocol after sustaining concussions against Philadelphia last Sunday.

Meanwhile, the Packers activated rookie guard Simon Stepaniak from the reserve/non-football injury list. Stepaniak, a sixth-round pick from Indiana, had missed all of training camp and the first 13 weeks of the season while recovering from a major knee injury suffered during his senior season with the Hoosiers.

In addition, rookie running back AJ Dillon, who has been on the reserve/COVID-19 list since returning a positive test on Nov. 2, was seen working at practice, though he has not yet been activated.

Get the latest postgame updates after the Green Bay Packers defeated the Detroit Lions 31-24 Sunday at Ford Field in Detroit to clinch the NFC North Division.

Coming through from long range in the clutch, Mason Crosby delivers for Packers in victory over Lions

Even though a false start penalty had moved the ball back 5 yards to make it a 57-yard attempt, Packers coach Matt LaFleur let Mason Crosby and the field-goal unit stay on the field in a 28-21 game and the veteran delivered.

After back-to-back weeks without a catch, Packers WR Marquez Valdes-Scantling comes up big in Detroit

Marquez Valdes-Scantling delivered Sunday, finishing with six receptions for 85 yards, including an acrobatic, back-shoulder TD catch on a pass from Aaron Rodgers.

Packers decide not to bring fans back to Lambeau Field before season’s end, will evaluate postseason possibilities

There won’t be anyone — other than Packers employees and their families — in the bleachers for Green Bay's final two home games: Dec. 19 against the Carolina Panthers and Dec. 27 against the Tennessee Titans.

After staying so healthy a year ago, Packers hope injury luck isn't running out

Green Bay is the ninth-most injured team with 132 man games lost this year.

With fond memories to take away from Green Bay, nostalgic Aaron Rodgers says, ‘Hopefully, that day isn't too soon’

“If you had told that 21-year-old he'd still be sitting here at 37, I'd be pretty happy about that,” Green Bay Packers quarterback Aaron Rodgers said Wednesday.

Packers quarterback Aaron Rodgers is on pace to be sacked a career-low 16 times.

Packers' Davante Adams catches a 9-yard TD pass despite the defense of Eagles' Darius Slay during the second half Sunday at Lambeau Field. It was Aaron Rodgers' 400th career touchdown throw.