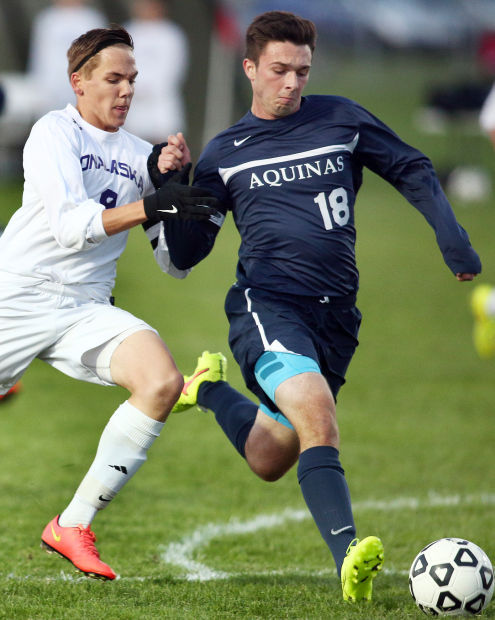 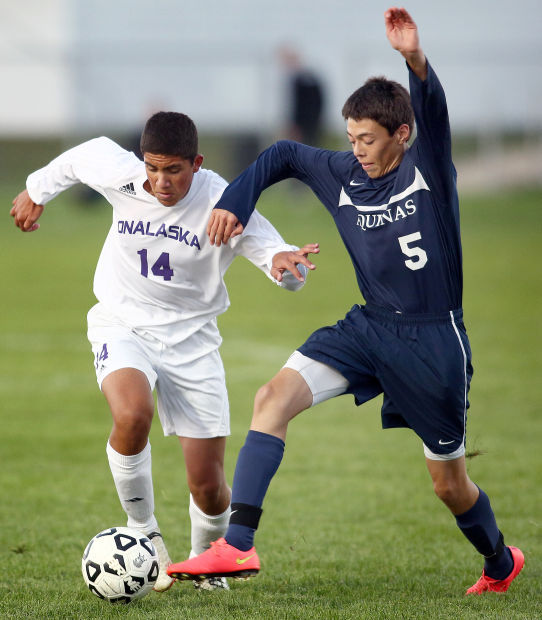 Onalaska's Sam Naik dribbles against Aquinas' Matt Thill during Thurday's MVC game in Onalaska. The Blugolds won 2-1 on a Tim Healy goal in the 49th minute.

Snyder slid to stop shots, jumped to knock them away from the crossbar and stood his ground at point-blank range as the Hilltoppers tried — and failed — to tie their MVC game.

The strong defensive performance allowed first-place Aquinas to hold on for a big 2-1 victory at the Onalaska athletic fields.

“This is the best game he’s had,” Aquinas coach Lucas Eagon said when asked about Snyder. “He’s dealt with a lot of injuries, and he has to sit out a lot of practices, so having him on the field is a blessing for us.

“For him to come out here and play like that shows how much heart he has and how good he really is.”

The Blugolds (4-0) found a way to blank Onalaska senior Bjarki Sigurdarson and broke a 1-1 tie when senior Tim Healy won a ball from two Hilltoppers just across midfield and took it all the way to the net in the 49th minute.

Healy’s goal gave Aquinas the chance to pack in their defense and try to contain Sigurdarson and his teammates the rest of the way.

“They did what they had to do to win the game, and (Snyder) did an excellent job,” Onalaska coach Zach Kimmel said. “Their defense, basically, cleared the box, and when we had opportunities, (Snyder) came up big.”

The Hilltoppers (1-1-1) did get the ball past Snyder in the 62nd minute, but they were called for offside, and the Blugolds maintained their lead.

Snyder was credited with eight saves, and his teammates made plays in front of him, too. Grant Joslyn kicked away a pass by Sigurdarson near the box, and Evan Dolan used his head to clear a corner kick in the 81st minute.

“Bjarki is an amazing player and is such a dangerous player every time he touches the ball,” Eagon said. “We had Riley shadow him, and I think Riley showed that he’s the best lockdown defender around.”

Tim Bettis gave Aquinas a 1-0 lead off an assist from Zack Snyder early before the Hilltoppers tied things up. Drew Ericson beat Snyder on a shot set up by Noah Truax in the 35th minute.

Four minutes later, Snyder was involved in a collision with Onalaska’s Mitchell Schaller in front of the goal. Snyder was down for several minutes before leaving the field.

He returned after a few minutes on the sideline to anchor the defense.

“I got a ball or cleat to the ribs, and it knocked the wind out of me,” Snyder said. “They just had to check me out and make sure I was OK before I went back in. I knew I’d get back in there.”

And that was just what Aquinas needed on Thursday. It hosts second-place Sparta (2-0-1) at Fields for Kids on Tuesday.

“This was huge because we’re still undefeated in conference, and Onalaska is always a big game,” Snyder said. “We were under a lot of pressure here tonight, and we played a good game.”

Athletic directors at Madison East, Madison La Follette, Madison Memorial and Madison West seek to reassure student-athletes that an alternative spring season is being planned amid concerns this fall about the COVID-19 pandemic.

Onalaska's Sam Naik dribbles against Aquinas' Matt Thill during Thurday's MVC game in Onalaska. The Blugolds won 2-1 on a Tim Healy goal in the 49th minute.