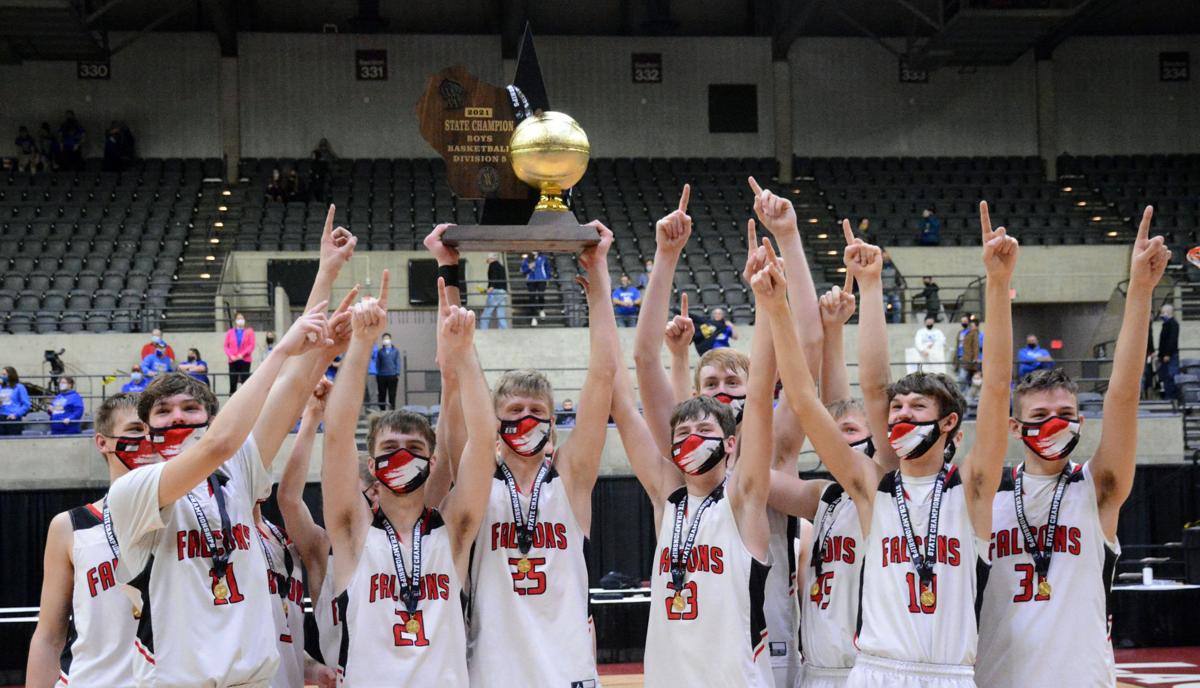 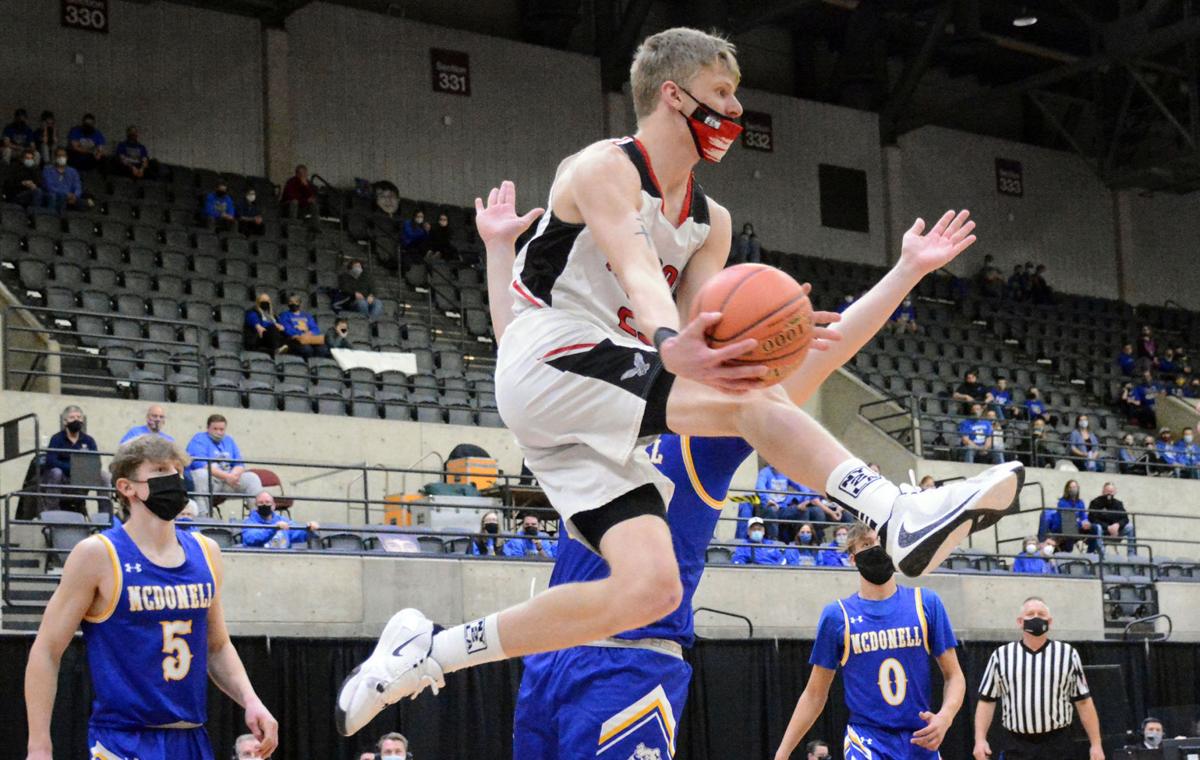 Hustisford's Dylan Kuehl looks to pass the ball to a teammate during the first half of Thursday's WIAA Division 5 state championship game against McDonell Central Catholic, at the La Crosse Center. 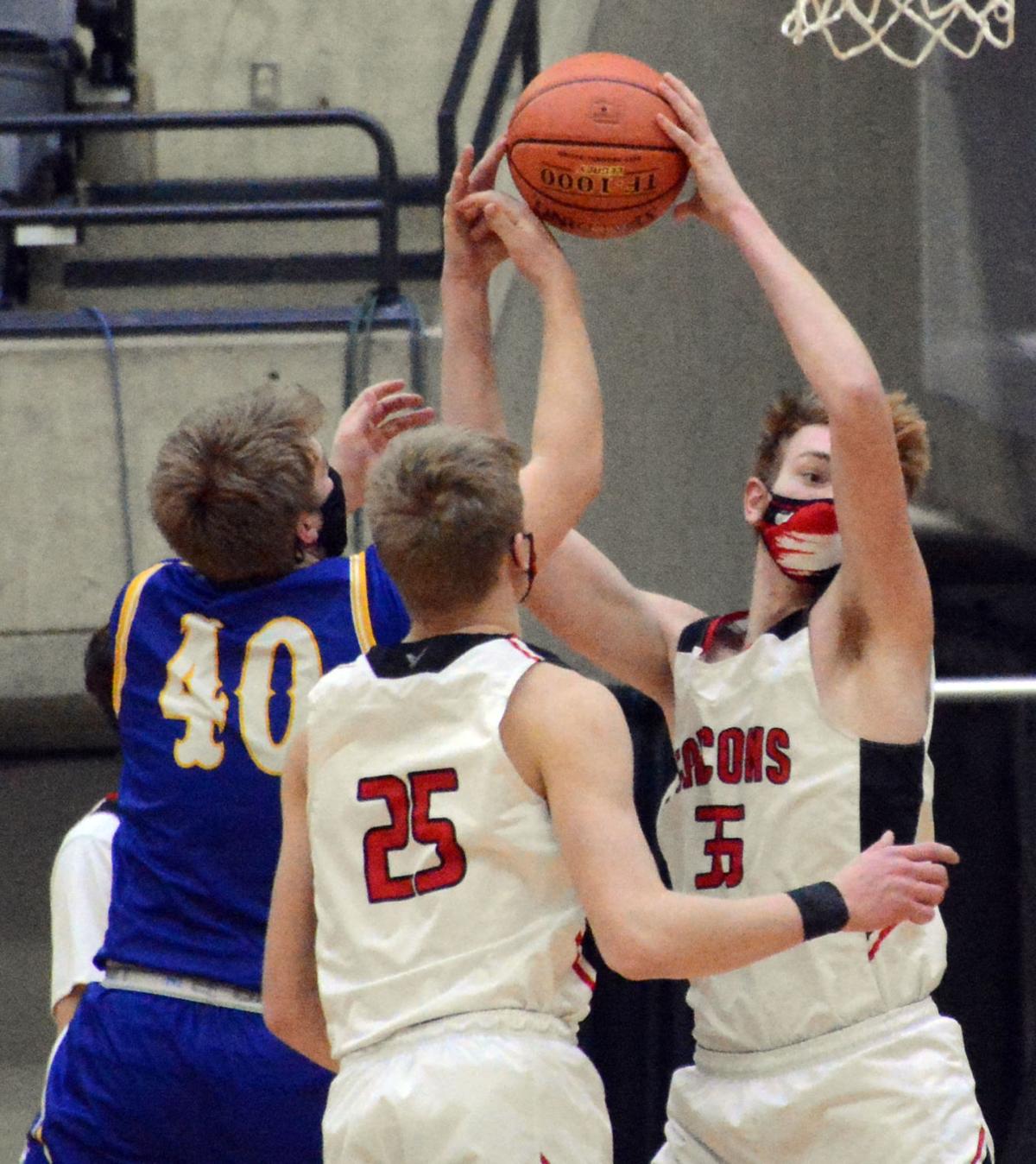 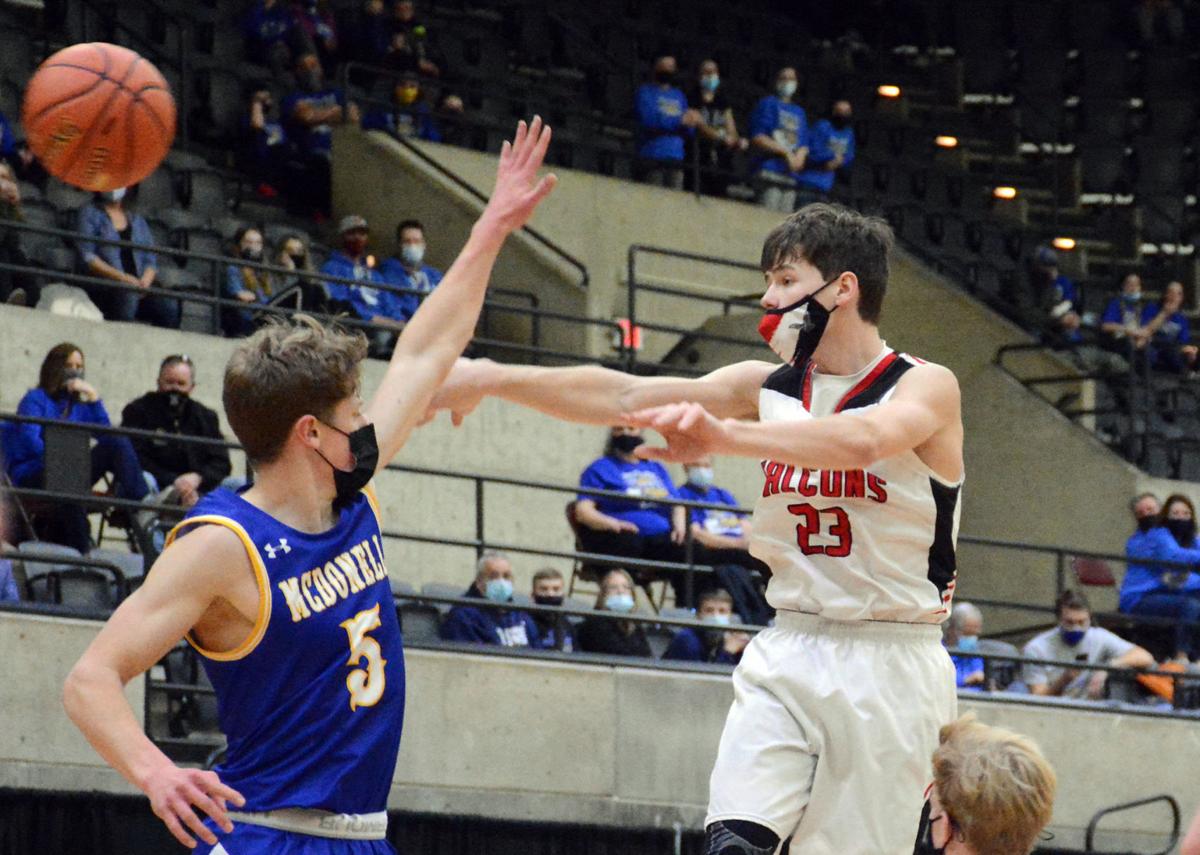 He’d rather catch some Zs for as long as possible.

Thursday, however, the 6-foot-9 center made sure not to miss his alarm, helping the Falcons dominate Wauzeka-Steuben in the WIAA Division 5 state semifinals to advance to the state championship game against McDonell Central Catholic later in the evening.

Eggleston smartly recharged his batteries and came out like a man on a mission against the Macks, helping the Falcons cruise to a 69-35 victory and the program’s first-ever state championship.

“To actually think about a state championship is a dream come true,” Eggleston said, “to say the absolute least.”

His seven blocks against the Macks tied a Div. 5 state record that was previously held by Sheboygan Lutheran’s Sam Dekker and McDonell’s Kyle Cody, who each recorded seven in the 2012 title game. The Falcons finished with 11 against the Macks, which broke the old record of 10 that was set by McDonell in 2016 against Green Bay N.E.W. Lutheran.

“I have no idea how to feel about that,” Eggleston said of matching Dekker, a former star with the Wisconsin Badgers who had an NBA career before currently playing in Turkey. “It’s incredible to be able to share a record with a professional basketball player, who played in the state. I don’t even know what to say about that. It’s just unreal to me.”

The Falcons finished the tournament with 15 blocked shots, which broke a state tournament record of 13 in Div. 5, also set in 2012 by Sheboygan Lutheran.

“I think they were even better than we thought they would be, especially defensively,” Macks coach Adam Schilling said. “Their length gave us a lot of issues. They were able to stay home on our shooters when we got in the lane. We haven’t played many teams that are that athletic and big, but they can play offensively too.”

Eggleston came out ready to go against the Macks, scoring 15 points in the Falcons 26-5 run over the game’s opening 13 minutes.

“That’s exactly what we talked about doing, and coaches can talk a lot,” Falcons coach Otto Hopfinger said. “When players come and play and execute what you want them to do, it’s something special. We had that game plan and they executed exactly like we wanted them to do it.”

Eggleston finished with 19 points and 11 rebounds for a double-double following a 19-point, 6-rebound performance in the semis.

He wasn’t the only one to have a good night. Senior Dylan Kuehl notched a double-double of his own with 20 points and 11 boards against the Macks.

The Falcons only have two players under 6-foot, and the size and length advantage showed in the title game.

“It’s very difficult to play a team that long and that big,” McDonell senior Logan Hughes said. “It’s hard to get our drive and kicks like we had been doing with success throughout the playoffs and the regular season. Obviously, we just couldn’t match up with their size offensively and defensively.

“It was just a really challenging team to play against.”

The Falcons outrebounded the Macks 39 to 17 and outscored them in the paint 44-14. With both of those stark advantages coupled with the amount of blocked shots the Falcons racked up, the Macks didn’t have an answer.

“It gave us a ton of momentum,” Eggleston said. “Any shot that obviously doesn’t go in, is huge. Any shot we can block to get a fast break going and have a dunk is even bigger because you have to have momentum going in the next possession to hopefully get the same thing going.”

The Macks traded buckets with the Falcons in the final 5:06 of the first half to go into the break trailing 37-16.

Hughes led the Macks with 12 points while both sophomore Eddie Mittermeyer and senior Tanner Opsal had six apiece.

However, since the Falcons seemingly already had a sizeable lead, Kuehl and Eggleston treated the second half like a dunk contest to get the Husty crowd going. Kuehl out-dunked Eggleston, 4-3, but the latter said his last one with 4:07 remaining to extend the lead to 60-29 was the best.

“We just came out, we had our opportunities and we took them,” Eggleston said. “It was so fun.”

Now it just has to sink in that the Falcons have a first-ever gold ball to add to the school’s trophy case.

“I don’t think it’s going to set in for a while because this feels like a dream to me,” Eggleston said. “I never would’ve thought I would be in the position I am in right now with this team.”

Hustisford's Dylan Kuehl looks to pass the ball to a teammate during the first half of Thursday's WIAA Division 5 state championship game against McDonell Central Catholic, at the La Crosse Center.