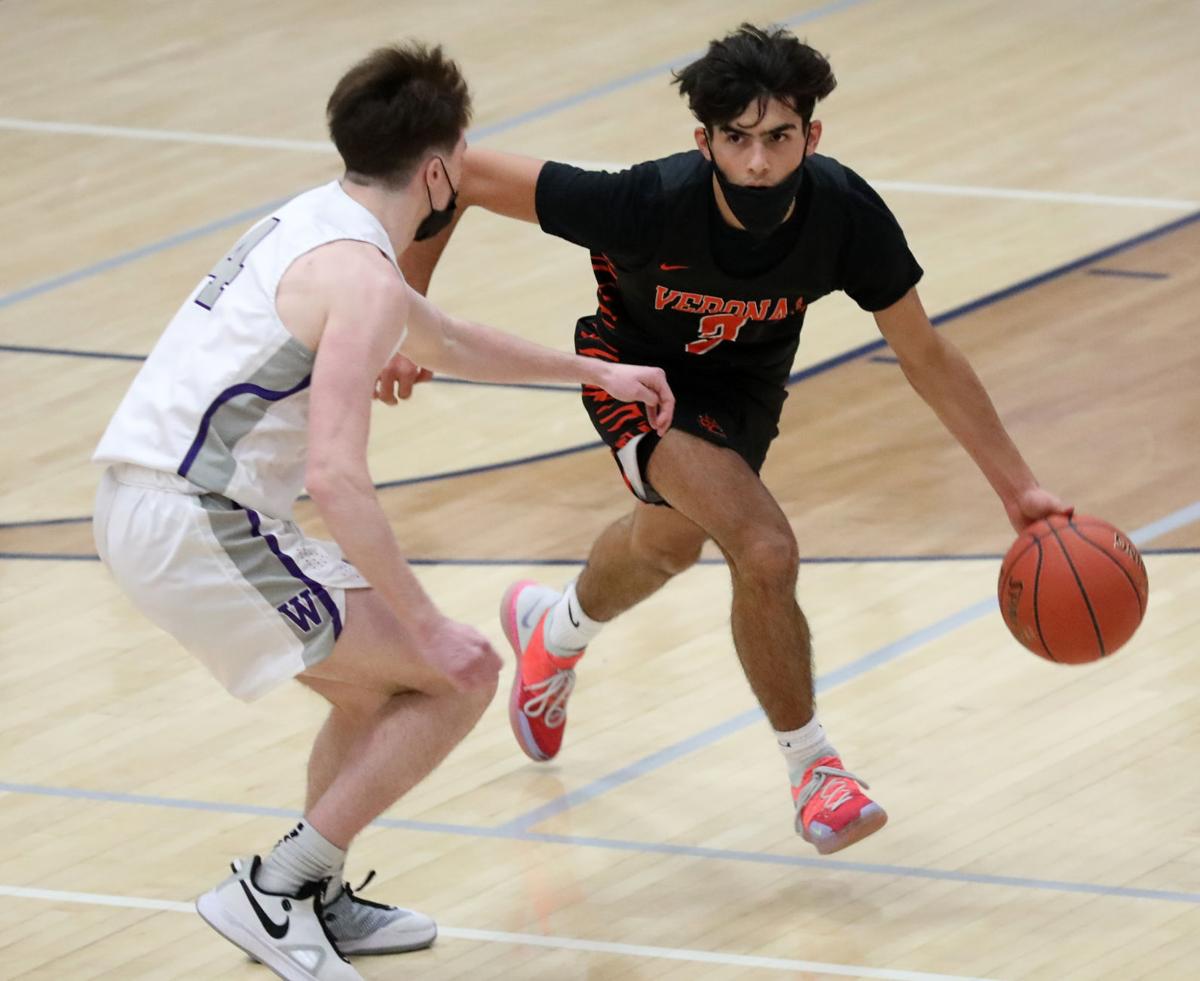 Verona's Jonah Anderson drives against Waunakee's Aidan Driscoll during the first half Friday night in Baraboo. 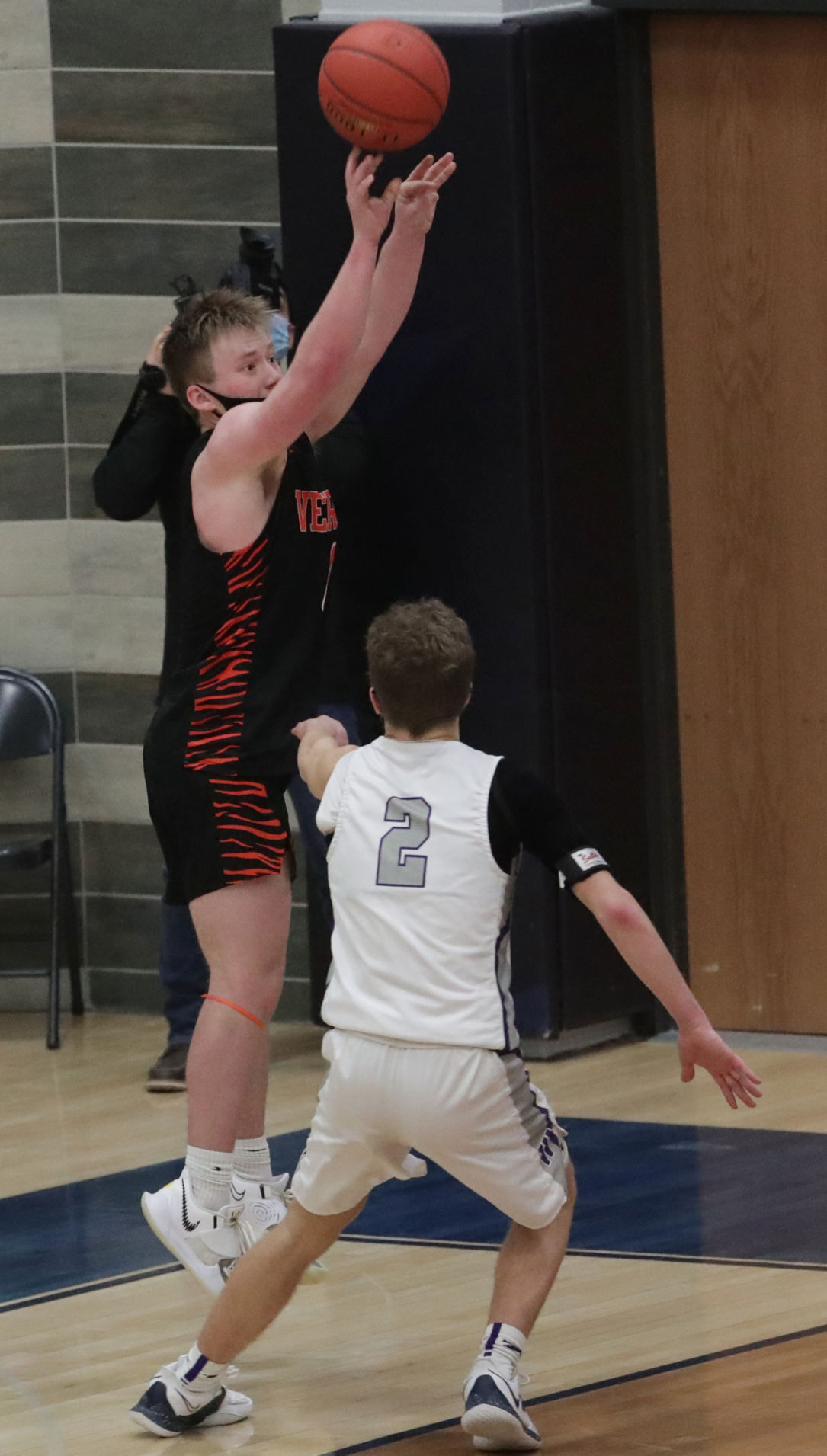 Verona's Cam McCorkle releases a 3-pointer with 12.2 seconds remaining Waunakee's Jaxson Zibell during the second half.

The 3-point shot McCorkle made from the left corner with 12.2 seconds remaining Friday night was the biggest shot he’s made playing basketball. And it topped the one he made 32 seconds before it.

“Oh, for sure,” McCorkle said. “(Those were) the biggest shots. It’s amazing. What an adrenaline rush.”

McCorkle’s 3-pointer was the winner in fifth-seeded Verona’s 66-65 come-from-behind victory over top-seeded and 10th-ranked Waunakee in a WIAA Division 1 boys basketball regional semifinal.

“Jonah Anderson had two great drives … and they drew attention, and he gave it to me,” said McCorkle, who scored all nine of his points in the second half. “And I came down with two, I’d say, lucky outside shots. I was pretty off tonight, but it was well worth it (at the end).”

Bennett Sherry, a 6-5 senior, made three 3-pointers and led Verona with 16 points. Senior guard Kolson Roddick added 14 points for the Wildcats, who rallied from a 16-point second-half deficit.

“If we generate three stops in a row, then we tend to gain more energy and it helps us play better,” Verona coach Reggie Patterson said. “Then my guys, they just have got to believe in each other. We always preach: `Believe, believe, believe, believe.’ ’’

Senior Caden Nelson led Waunakee (14-6) with 16 points, including 10 in the first half when the Warriors took a 30-19 halftime lead. Andrew Keller, a 6-6 junior, had 13 points and senior guard Jaxson Zibell and 6-7 junior Joey Fuhremann added 11 points apiece.

“(The Wildcats) just don’t ever quit,” Waunakee coach Dana MacKenzie said. “There is no quit in their game. All five guys they have on the floor are always playing hard and always playing physical. They made us play ugly. We turned it over way too much and didn’t make free throws (10-for-19).”

The Warriors took a 65-60 after Zibell connected on two free throws with 1 minute, 5 seconds left and junior center Jack Dotzler made the second of two foul shots with 52.6 seconds remaining. Roddick made a 3-pointer with 1:46 remaining, pulling Verona within 62-60.

But Verona rallied with a 15-2 run, taking a 53-52 lead with 5:41 to play. The Wildcats’ comeback occurred after Waunakee’s Keller picked up his fourth foul and went to the bench with 9:24 remaining.

Keller returned with 5:37 left after Anderson’s basket on a runner in the lane, off an assist from sophomore guard Gavin Farrell, put Verona ahead 53-52. But Keller fouled out 15 seconds later.

“Andrew is a huge part of our offense, but we’ve won a lot of games this year without Andrew scoring a lot,” MacKenzie said. “That’s certainly not an excuse because we should be able to play without him as deep as we are. We didn’t have it tonight. But I’m proud of our guys. I’m proud of how they played through a season without practice and with 20 road games.”

“For those guys out there (celebrating the victory), they deserve every bit of this,” Patterson said. “I’m just coaching and calling the plays. They are the ones playing basketball. I’m just happy to be here today. I’m from Mississippi, born and raised. Being in this state has been nothing but a blessing in my life.”

Verona's Jonah Anderson drives against Waunakee's Aidan Driscoll during the first half Friday night in Baraboo.

Verona's Cam McCorkle releases a 3-pointer with 12.2 seconds remaining Waunakee's Jaxson Zibell during the second half.