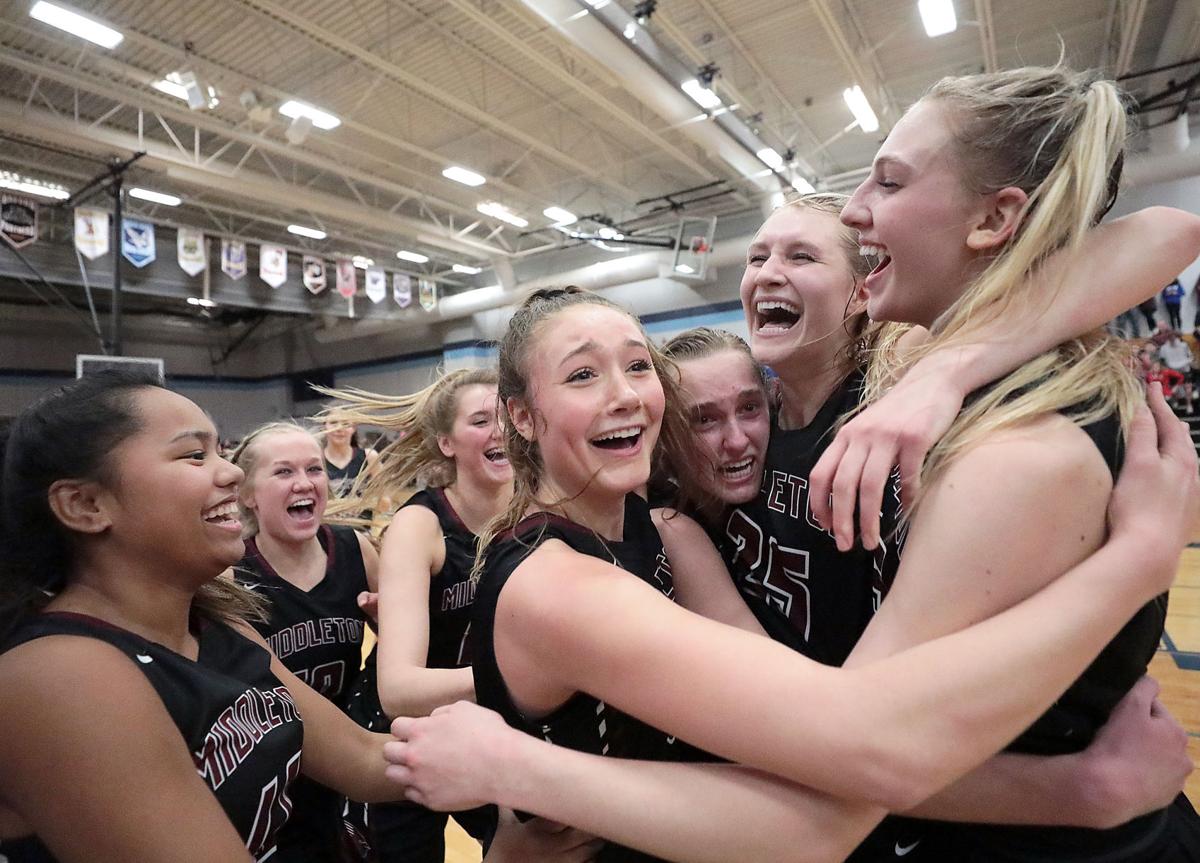 Middleton players celebrate their 61-58 win over Madison Memorial in a WIAA Division 1 sectional final on March 7 at Monona Grove. 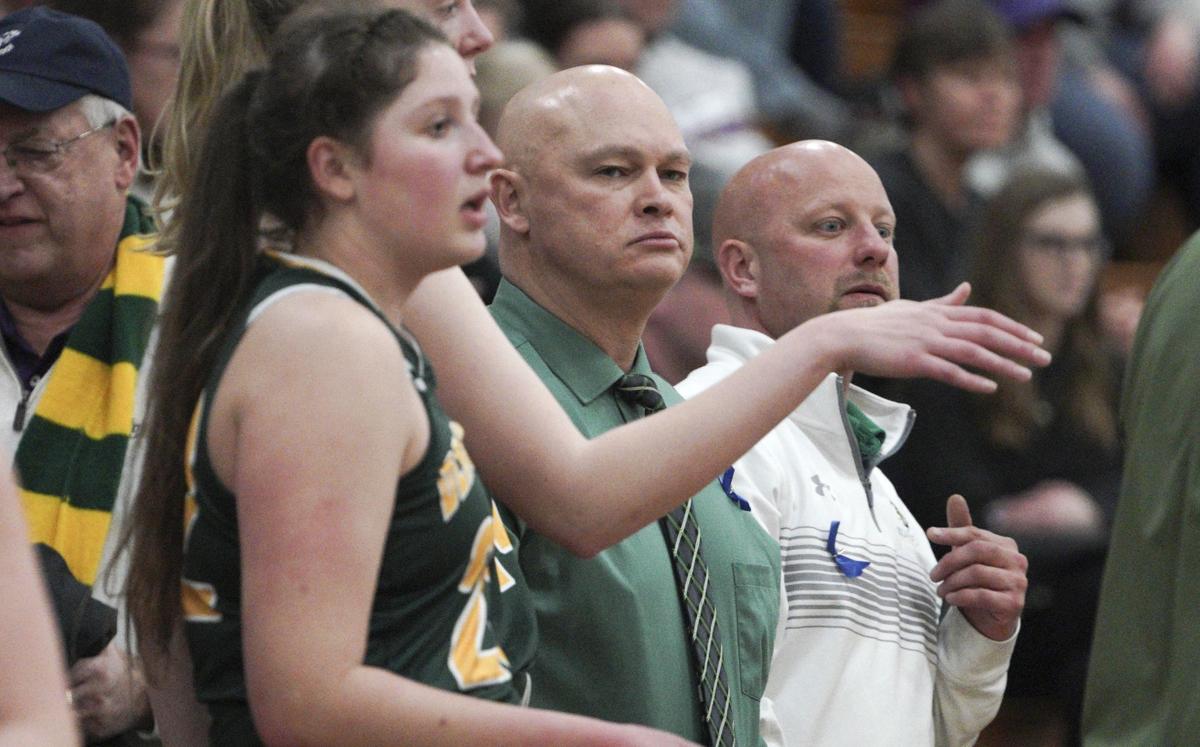 Just before the top-ranked Middleton girls basketball team was ready to leave Thursday morning for the WIAA state tournament in Ashwaubenon, it learned the crowd size would be limited to 88 fans per team due to the COVID-19 coronavirus situation.

That, coach Jeff Kind said, was an emotional setback for the team, families and supporters who were hoping to watch Middleton in person at the Resch Center as the top-seeded Cardinals continued their quest for the program’s first WIAA Division 1 state title.

After working through that, the Cardinals spent the day traveling, conducting a practice, having meals and watching Thursday night’s Division 4 games on TV at their hotel.

Middleton, with eight seniors, was scheduled to meet Oconomowoc, which had qualified for its first state appearance, at 6:35 p.m. Friday in a Division 1 semifinal.

Then at 11:15 p.m. Thursday, their quest and season ended abruptly with an announcement from the WIAA. The winter sports season was over; the final two days of the girls state tournament, boys sectional games and the boys state tournament wouldn’t be played.

“It’s a strange, strange situation,” Kind said. “It’s been like a big, emotional roller coaster for the kids and for all of us. We are dealing with it as well as we can. They kind of understand. But in sports you are used to a season ending with a loss or you win a championship. But not even playing is a hard thing to deal with.”

Kind — who has coached 42 seasons, including 28 at Middleton — was on that emotional roller coaster, too, because he was pondering a personal decision after the great season he’d experienced with his team, saying, “This is really a special group.”

Kind, who plans to retire from teaching (physics and astronomy) at Middleton after this school year, said he likely would have “called it quits” after the season, particularly if the Cardinals won the title.

But now, without competitive closure to this season, he said Friday afternoon after returning from the Green Bay area that he has reconsidered and said he would like to come back for the “fun challenge” of coaching a group that won’t be a Big Eight Conference favorite next year. He said since he is retiring, the school district will decide if he returns as coach.

“It’s a life lesson,” Kind said. “It’s all about what we learn in high school sports, and that is the ultimate goal. … We talked about you control a lot of things and we controlled most of the controllables, but that there are things you just don’t have any power over. Down the road, this is something you will always remember. I am proud I was able to coach them. All season, they were able to rise to the occasion.

“We just don’t have the pen in our hand for the last chapter.”

Emotions and feelings were raw and ran the gamut, and many were expressed on social media platforms.

Disappointment. Emptiness. Anger. Deflation. Frustration. Confusion. Understanding for the greater good and the health and well-being of people. And, of course, sadness.

“My heart breaks for my team,” Oregon girls basketball coach Adam Wamsley tweeted after the announcement was made Thursday night.

Oregon had qualified for the state tournament for the first time in 40 years and was scheduled to play Hortonville at 1:35 p.m. Friday with fans from Oregon eager to turn out.

Wamsley sensed the WIAA games might be canceled after the NBA suspended its season Wednesday night. He believed a domino effect would follow.

But Oregon prepared and expected to play Friday, especially after the girls games were played Thursday, including a Division 3 game between Lake Mills and Wrightstown.

Then the news came late Thursday.

“I told my wife that our season was over,” Wamsley said prior to gathering his team in one of the rooms at the team’s hotel. “That is one of the hardest things I’ve had to do in coaching. To see all the emotions, the tears and crying. No words could help that situation.”

But Wamsley and the Panthers tried to make sense of it, and talked about the importance of health and public safety.

“It is bigger than basketball and a lot of things,” he said. “We understand people being safe. Taking care of family is No. 1. That is a main part of our program — `family first.’ But I’ve also told them it’s OK to have emotions and be upset. You have the right. It’s OK to be sad. We are working to move on.”

That, however, was difficult.

“We all have our dreams,” the 37-year-old Wamsley said. “Coaching that group at state was my dream.”

The Panthers and several other teams were able to go to the Resch Center on Friday morning and walk around the court and arena, attempting to gain some closure. A WIAA official who was there happened to have a trophy and teams were allowed to take photos, Wamsley said.

The Panthers were welcomed home with cheers by many of the students and teachers who had gathered outside the high school as the team returned Friday afternoon.

“The girls needed that,” Wamsley said.

Golden Beavers coach Tim Chase said, “We want everyone to be safe,” and believed the WIAA made the correct decision.

“That was the decision the WIAA had to make,” he said. “That’s not the decision we wanted, but they had to do what they did. It’s just you don’t have the closure to your season that you normally have.”

Chase said his team, which was second-seeded and second-ranked, wanted that opportunity to finish its pursuit of a fourth consecutive championship.

“We were focused,” he said. “We were ready to get after it.”

Chase had colon cancer surgery in January and returned to coaching at the end of the regular season.

“I wanted to get back for a moment like this,” he said. “I knew how hard they were working and I wanted to be part of that.”

Chase said his team controlled everything it could and praised its play this season. He felt empathy for his team and its seniors, who also visited the Resch Center on Friday, he said.

“The seniors had gone 6-0 on that court,” he said. “That is pretty impressive.”

A petition was started online forwarding the idea that the girls state tournament should be rescheduled. But that is unlikely to occur, particularly in the aftermath of school closings in the state and the WIAA ending the winter sports season.

Chase, however, said he believes the WIAA needs to find a way to recognize teams that qualified for the girls state tournament, because he believes it would be wrong to indicate the teams didn’t accomplish anything this season.

He compared it to two athletes competing in a track event and tying; they’d both get first-place medals. He believes the teams that didn’t play deserve the chance to say they were champions or co-champions.

“It was surreal at the start,” East coach Matt Miota said about its game with Oconomowoc on Thursday and playing without the usual crowd present. “Warm-ups were very strange, but you adjust pretty quickly and the teams bring their own energy. Our team was doing what it was supposed to be doing at the right time. We were trending at the right time. That’s what is frustrating.”

The excitement of Thursday’s victories for La Follette, East, DeForest and Wisconsin Dells was short-lived.

“I thought if they let us play (Thursday night), they’d let us play Saturday,” Miota said. “It’s just bizarre. It’s a strange situation. It’s hard to process, especially for 16-, 17- and 18-year-old young men. Obviously, they are trying to be proactive with this and erring on the side of caution with what they are trying to do. It was just confusing.”

And frustrating for the players, a disappointed Miota said.

“I don’t even know where to begin this, I’m just heartbroken,” Probst tweeted. “I never thought (Thursday night) would be the last time walking off the court and celebrating with my teammates. Thank you to everyone that made these last 4 years so special. The Lancer community and support is unreal and I wouldn’t want to wear anything else across my chest.

“To all my teammates and coaches, thank you for pushing me every day and giving me some of the best experiences of my life. I have created bonds and memories that will last a lifetime.

“I’m so proud to be a Lancer and we poured our heart and souls into this season to try and bring a gold ball home. Unfortunately, we won’t get that chance. Here’s to the next chapter …”

Is the Cincinnati Reds recent hot streak sustainable the rest of the season?

The WIAA Board of Control, which met virtually Friday, explored financial recommendations, verified dates for the boys golf state tournament in June, 2021, and approved an extension of the alternate year physical exam period.

Middleton players celebrate their 61-58 win over Madison Memorial in a WIAA Division 1 sectional final on March 7 at Monona Grove.