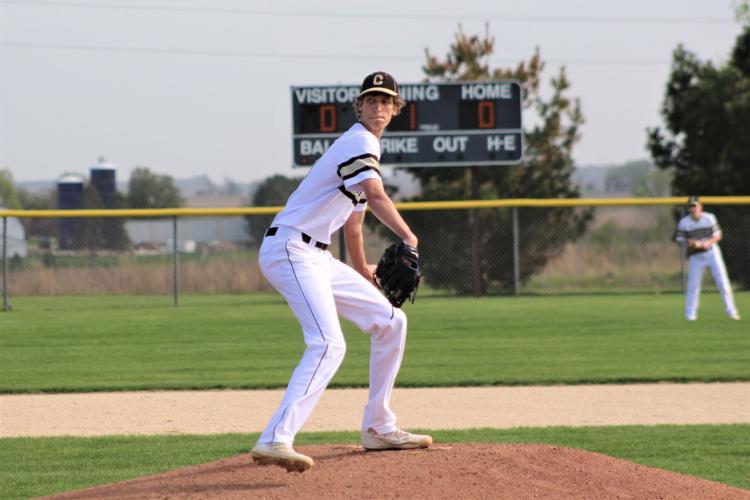 Caledonia junior Tristan Augedahl goes through his motion during a one-run performance in a 4-1 win over Rushford-Peterson on Friday. 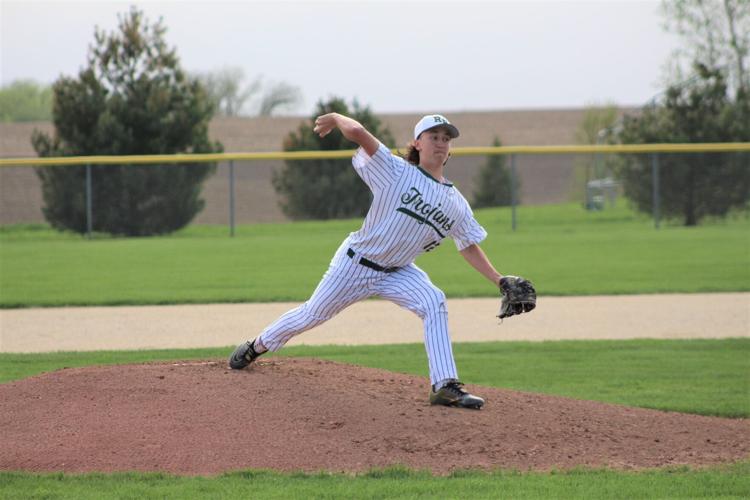 Rushford-Peterson sophomore Rylan Schneider throws a pitch during the Trojans' 4-1 conference loss to Caledonia on Friday.

CALEDONIA — It can take an inning or two for Caledonia High School junior pitcher Tristan Augedahl to find his groove, but once he is locked in, the lefty is tough to hit.

After allowing two walks, a hit and a run with two strikeouts in the first two innings, the junior was lights out the rest of the way.

He held the Rushford-Peterson baseball team scoreless and struck out 10 more batters over the remaining five innings to lead the Warriors to a 4-1 victory Friday in a clash of teams in the top half of the Three Rivers Conference standings.

“Sometimes I need a couple innings to warm up, then I’m good. But we got through it,” Augedahl said.

R-P senior Malachi Bunke drew a walk to start the game, and after a sacrifice bunt moved Bunke to second base and Augedahl picked up his first strikeout of the game, the junior pitcher was helped out of the jam when senior catcher Gabriel Morey caught Bunke stealing third to end the inning.

The Warriors got on the board in the bottom of the first when senior leadoff hitter Brady Augedahl reached on an error and junior Ayden Goetzinger drove him in with a sacrifice fly a few batters later to take a 1-0 lead.

Tristan Augedahl’s only blemish came in the top of the second inning.

Senior Justin Ruberg drew a walk to lead off the inning, then advanced to second on a wild pitch. A groundout by junior Riley Tesch moved him to third and senior Logan Skalet hit a single to center field to send Ruberg home and tie the game 1-1.

It was a textbook scoring situation from the Trojans, as Ruberg took every advantage he could to move around the bases on wild pitches and outs and make his way home.

“You can put a lot of pressure on them to field it, throw it, catch it, that’s three good things that have got to happen. If we can just put the ball in play, good things will happen for us,” head coach Jordan Aug said.

After that one-run inning, Augedahl would only allow one more runner from that point on.

Caledonia head coach Brad Augedahl says that it is a luxury to have a pitcher shut the other team down the way Tristan did.

“When he’s pounding the strike zone, it makes your job as a coach a lot easier,” Augedahl said. “He was dialed in tonight and it was fun to watch him, it was quite a performance.”

The Warriors jumped back into the lead in the bottom of the third inning when once again Goetzinger drove home Brady Augedahl, this time with a single through the left side that made it a 2-1 game.

Following a scoreless fourth, Caledonia struck again in the fifth and again it was Goetzinger that did the damage. The junior infielder hit a double to the left field wall to drive in senior Thane Meiners, and two batters later Goetzinger made it home on a single by freshman Ben Stemper.

Goetzinger went 2 for 3 with three RBI and one run scored as he had a hand in all four of the Warriors’ runs in the game.

Coach Augedahl says that Goetzinger is expected to be a key cog in the offense and described Friday’s performance as business as usual.

The junior does not try any of the fancy batting strategies that have taken over the major leagues, and instead likes to keep things simple in the batter’s box.

Neither team got on the board in the final two innings, with a double in the sixth by Bunke serving as the only hit, and the Warriors held on for a win.

Friday’s matchup was the second meeting between the two teams this spring, and after Caledonia won 12-3 in the first one on April 12, the rematch was an improvement for the Trojans.

Sophomore pitcher Rylan Schneider played a large part in that, limiting the potent Warriors offense to just six hits four runs, with only three of them being earned runs, while walking two and striking out three.

The sophomore is more of a finesse pitcher than a flamethrower, but he did just what Aug asked of him.

“This is exactly what I had hoped for,” Aug said. “I felt like it was a good matchup for him. Those guys are good at timing up fast pitchers, but when you’re mixing the speeds and making them get off balance, that was good.”

Caledonia junior Tristan Augedahl goes through his motion during a one-run performance in a 4-1 win over Rushford-Peterson on Friday.

Rushford-Peterson sophomore Rylan Schneider throws a pitch during the Trojans' 4-1 conference loss to Caledonia on Friday.