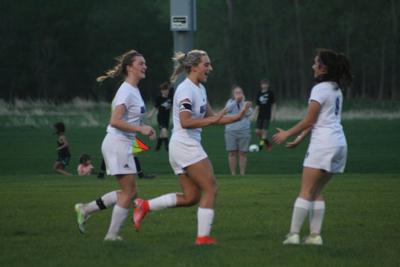 Coach Tyler Ludeking said the girls brought their top performances when the pressure was at it's highest.

"We've been suffering through a few injuries," Ludeking said. "Playing some of the nonconference teams that we did, we were on a bit of a losing streak but we were still hopeful. We knew when we got back into the conference swing we'd be ready to go and we have been. The girls have been doing nothing but top-level performances for us."

The RiverHawks entered the game with two goals allowed. Bronston secured her third conference hat trick of the season in the 71st minute and gave the Hilltoppers the lead for good.

"That's what being a senior is all about is taking advantage of those opportunities when presented to you," Ludeking said. "Talk about stepping up in a big spot. She did everything we asked of her, and we're very proud of her."

Ludeking said the team came into the match looking to use its attackers, and not just Bronston.

"We know we've got some great talent up top," Ludeking said. "(Senior forward) Emma Breidenbach is strong for us. (Sophomore defender) Kendyl Johansen, as well, has done great for us. We knew with them, we were going to get opportunities, it was just a matter of it we capitalized and tonight we did."

Bronston — who also plays hockey for Onalaska — previously had hat tricks in blowout wins over Sparta and Logan. On Thursday, the senior had the scoring column all to herself with Bronston crediting helpful passes from teammates.

"I was just focused on beating the defense to the ball," Bronston said. "I couldn't have done it without my team. They gave me the ball and we were able to go from there."

Sophomore goalkeeper Summer Nicolai finished with eight saves, including three saves on a flurry of close-range shots by the RiverHawks in the 10th minute.

Bronston scored the only goal of the first half in the 17th minute on a rebound off a defender, helping the Hilltoppers lead 1-0 at the break.

The RiverHawks quickly changed the momentum to their favor, scoring two goals in the span of 90 seconds in the second half. Suddenly, Central led 2-1 with 30 minutes left after Aya Klein-Borgert scored in the 51st minute. Gabby Jarman scored Central's first goal in the 50th minute.

Four minutes after the RiverHawks took the lead, Bronston tied the game with her second goal. Ludeking said his team was responded well to the quick transition from leading to trailing to being tied.

"We knew it was going to be an emotional swing there," Ludeking said. "But we knew if we continued to play our way and our style that we'd be able to get the momentum back. Obviously that quick goal by Kiya in the second half helped us get bring that momentum back. We knew if we kept working hard, kept getting our subs and fresh legs in there that we were going to get our opportunity and those opportunities came."

Bronston managed to get off a shot on goal with a defender on her and collect the deflected ball to score the go-ahead goal at 71:30.

The Hilltoppers final scheduled contest of the regular season is another tough one, a nonconference meeting with one-loss Ashland at the D.C. Everest Invitational. Onalaska also plays in that tournament Saturday.

James Krause can be reached at James.Krause@lee.net or on Twitter @jkrausepro.