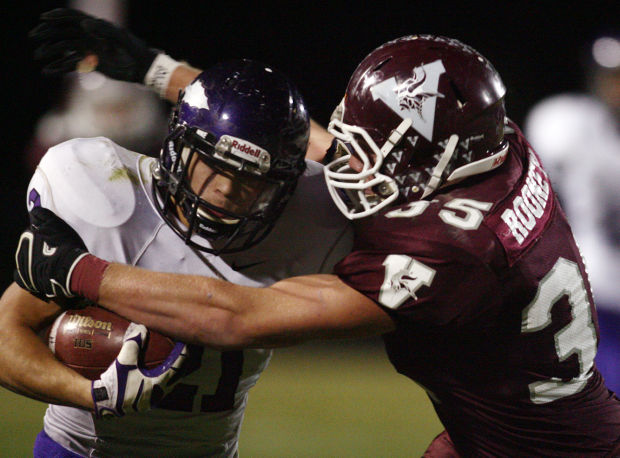 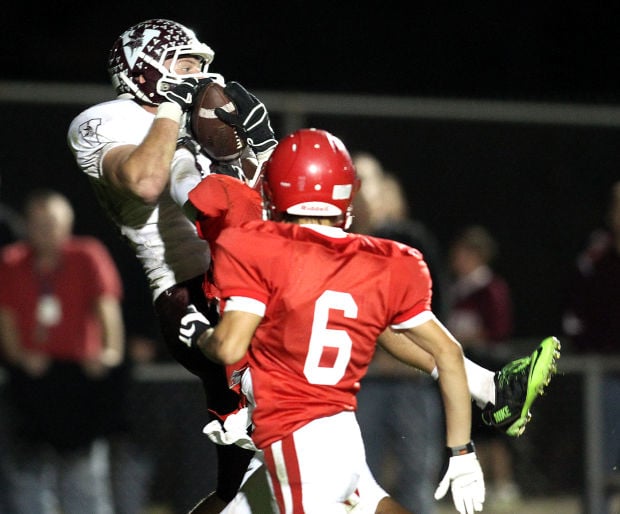 Holmen's Greg Rooney hauls in a touchdown in front of Logan's Jarrod Besl in the second quarter. Erik Daily 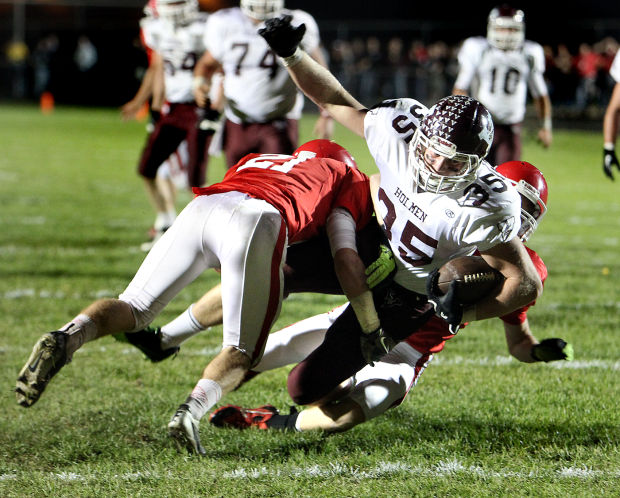 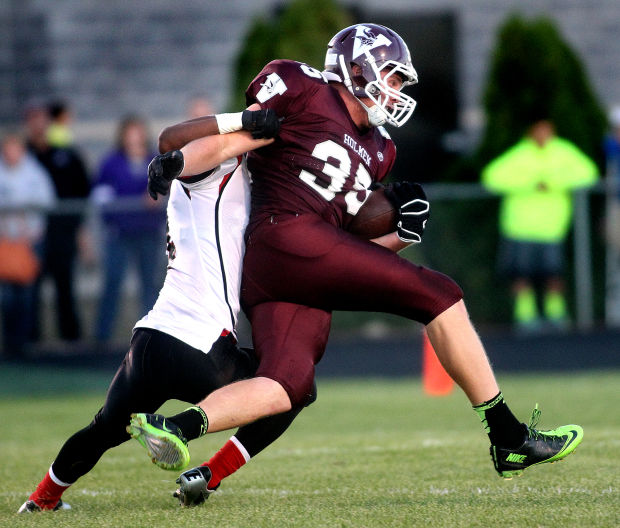 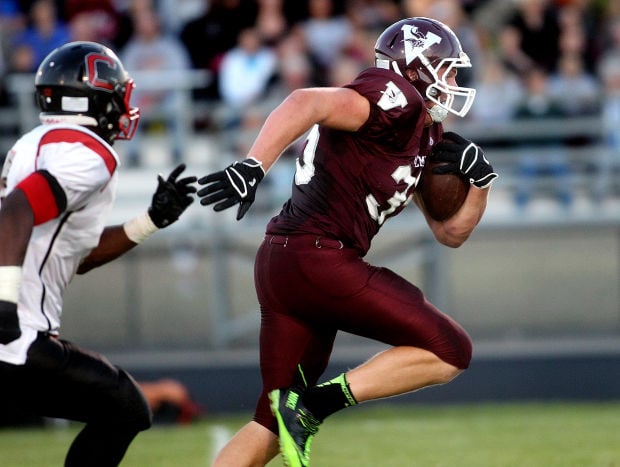 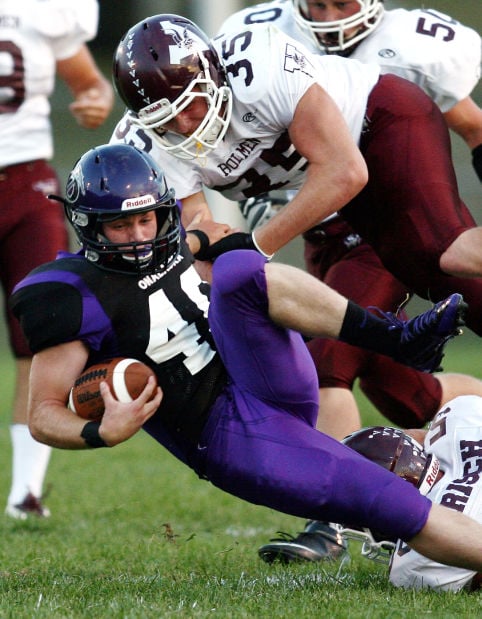 Onalaska's Alex Gumz gets brought down by Holmen's Greg Rooney on Friday, Sept. 6, 2013, during a game in Onalaska. (Rory O'Driscoll/La Crosse Tribune) 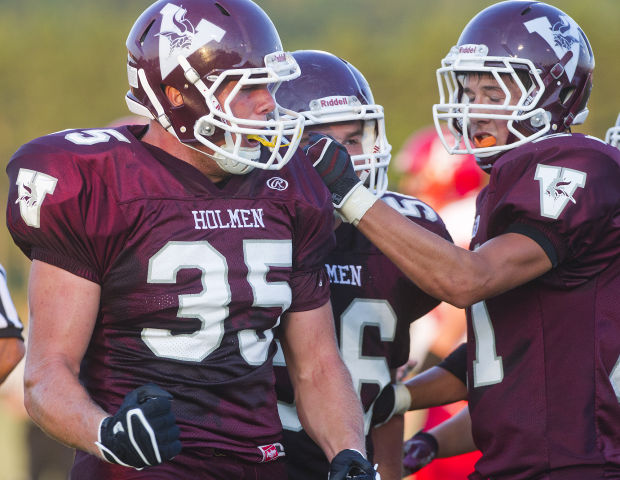 Holmen's Greg Rooney (35) celebrates with teammates after recovering a fumble during a nonconference game against Chippewa Falls on Friday, Aug. 23, 2013, in Holmen. (Andrew Link/Winona Daily News)

HOLMEN — He was a third-grader and chasing down opponents to rip flags from their waists, but Greg Rooney was already getting antsy.

He couldn’t wait to play football in fourth grade because of one major change in the rules.

“I was sick of pulling flags,” Rooney said. “It was only fourth grade, and we didn’t know how to block or really play, but we got to hit people.”

Eight years later, Rooney is hitting people much harder, with much more frequency and for significantly higher stakes.

He and his teammates have a chance on Saturday to put the Vikings (11-0) in a WIAA state semifinal for the first time since 1991.

The hurdle to clear is top-seeded Oshkosh North (11-0) in a 4 p.m. kickoff at Titan Stadium on the campus of UW-Oshkosh.

Rooney, all 6 feet, 5 inches and 240 pounds of him, will probably try to run through the Spartans rather than jump over them to get to the semifinal game.

The outside linebacker has been a magnet for contact all season for a defense that is allowing 6.3 points per game and has yet to be scored on in the first quarter.

Rooney’s transition from the defensive line to linebacker — he’d played on the line since third-grade flag football — has been a rousing success.

“I was offensive and defensive line forever because I was always one of the biggest kids in my class,” Rooney said.

The changes began when he entered the high school program.

A coach encouraged him to try out at tight end instead of sticking with the offensive line. Rooney was thrilled with the proposal.

“I could catch, and I wouldn’t say I was fast, but I wasn’t slow,” Rooney recalled. “I went to a camp over the summer, and it worked out well, and then I worked my way out to wide receiver.

“I moved to linebacker this year with the change (to a 3-4) defense. I was absolutely ready to try something new, and that’s worked out well, too.”

Rooney’s defensive change has given him more chances to make visible plays in the middle of the field, and he’s taking advantage of all of them.

If you’ve been a spectator at a Holmen game and motivated to ‘ooooh’ or aaaah’ on a particularly big hit, the chances are pretty good that Rooney made it.

Linebackers Noah Risch and Chuck Serauskas and Michael Woggon have made some, too, but it seems the biggest blasts always come from Rooney.

“Some of his hits and near misses ... I’ve almost held my breath until seeing what was going to happen,” Holmen coach Steve King said. “We you see someone his size who brings it like he does, you almost have to feel bad for the kid getting hit.”

Holmen sophomore Hunter McHugh, who is smaller than the 5-11, 153 pounds attached to his name on the roster, encounters Rooney every so often while playing linebacker during practice.

“This has happened multiple times, but once they were running a toss, and Greg is supposed to crack down on the linebacker,” McHugh said. “I went for the toss, and Greg was there, and ... that wasn’t good for me.”

Rooney’s senior success — he has six touchdown catches, seven tackles for loss and four interceptions — reinforced a new dedication to the sport after last season’s second-round playoff loss to Marshfield.

Until the end of last season, Rooney considered himself a pitching prospect for a good collegiate baseball program.

“Coaches (Travis) Kowalski and (Jason) Lulloff told me after the Marshfield game that I could really do something with football,” Rooney said. “I thought about what they said and wanted to go for it.”

Rooney lifted like he’d never lifted before and worked hard on other aspects of the game in the offseason.

“You can definitely see a difference in him this year,” King said. “I think a lot of it is his confidence.

“They defense we play has allowed him to do a lot of things, and he’s been a playmaker on offense. You can see the confidence him now in everything he does on the field.”

Holmen's Greg Rooney hauls in a touchdown in front of Logan's Jarrod Besl in the second quarter. Erik Daily

Onalaska's Alex Gumz gets brought down by Holmen's Greg Rooney on Friday, Sept. 6, 2013, during a game in Onalaska. (Rory O'Driscoll/La Crosse Tribune)

Holmen's Greg Rooney (35) celebrates with teammates after recovering a fumble during a nonconference game against Chippewa Falls on Friday, Aug. 23, 2013, in Holmen. (Andrew Link/Winona Daily News)