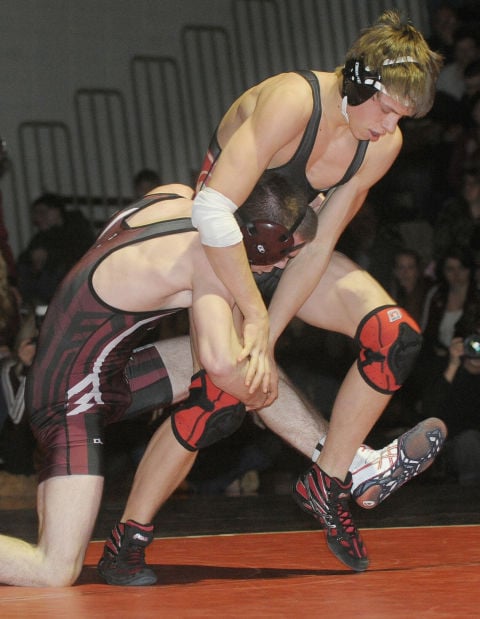 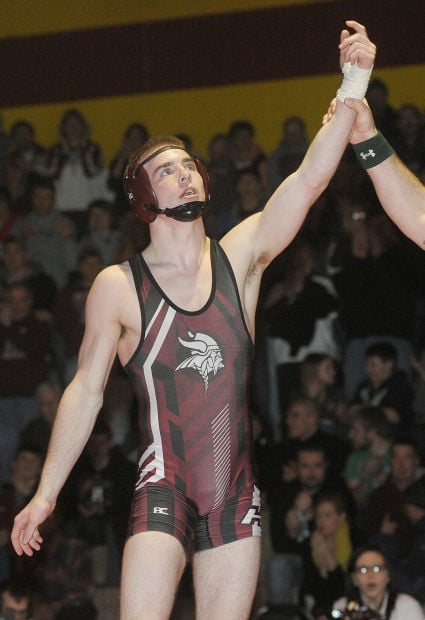 Holmen's Ryan Stalsberg is declared the winner of his #138 match against Sparta's Trystan Zurfluh on Thursday in Sparta. (Rory O'Driscoll/La Crosse Tribune)

They stood and faced each other from the opposite ends of a wrestling mat.

The roughly 1,000 people in attendance at Alton D. Ask Gymnasium in Sparta buzzed with anticipation and prepared for a roller-coaster of an MVC dual meet that turned out to be just that.

It wasn’t the best dual meet ever wrestled, and it wasn’t packed with match after match that went down to the wire.

There were some very good matches, but we also were robbed of better ones that didn’t materialize due to injury and illness. It was a very good dual that could have been even better.

The two best teams in the area were incomplete.

How about Holmen High School’s Darius Wright vs. Sparta’s Brock Polhamus at 132 pounds or Sparta’s Dan Dawley vs. Holmen’s Noah Risch at 195?

Holmen won 34-28 after Sparta stormed back from a large deficit to tie the dual at 28 with just the 285-pound match remaining.

Holmen’s Hunter Hauser then walked on the mat and had his arm raised in victory with Sparta being forced to forfeit ... due to injury.

There really is no reason to think that Hauser wouldn’t have won that match. The kid is good.

Hauser wrestling just amps up the environment a little more. Rather than simple applause for receiving a forfeit, we see some celebration on the mat and Holmen’s bench, and a little more action from the crowd.

That isn’t a dig at Sparta’s Joseph Benish, who wrestled well until his injury. Hauser had just been wrestling really well.

But we also didn’t get to see Sparta’s Trygve Zurfluh or Polhamus or Holmen’s Risch or Jacob Wiemerslage or Charles Serauskas.

Injuries (skin diseases included) happen in wrestling. Serious ones. They are part of the sport.

Despite the emergence of a very interesting dual, we didn’t get to see that Thursday.

Coaches of small wrestling programs are snickering right now. They’d love to have the resources of Holmen or Sparta — two of the strongest programs from the youth level up in the area.

But Sparta coach Jake Larsen said he’s been without a complete lineup all season and isn’t likely to see one.

There are some things you just never get to see, and it seems to happen more in wrestling that any other sport.

I used space on a page just like this over three years ago to beg for a match between Sparta’s Matt Tourdot and De Soto’s Chad Johnson that we weren’t going to get.

They both won state titles that year and have gone on to do great things at Old Dominion and Augsburg, respectively.

The difference there is that injury wasn’t a factor. They were just in different divisions and competing in different invitationals.

There are a lot of ways in wrestling to miss out on something a lot of people want to see.

There is no problem to solve here. There are going to be plenty of great matches between wrestlers all over the area during the next five weeks.

Postseason wrestling assures those matchups because the field gets stronger as the competition progresses.

But it’s always good to see the area’s best compete against the area’s best, too, and we missed out on the chance to maximize that opportunity Thursday.

Holmen's Ryan Stalsberg is declared the winner of his #138 match against Sparta's Trystan Zurfluh on Thursday in Sparta. (Rory O'Driscoll/La Crosse Tribune)