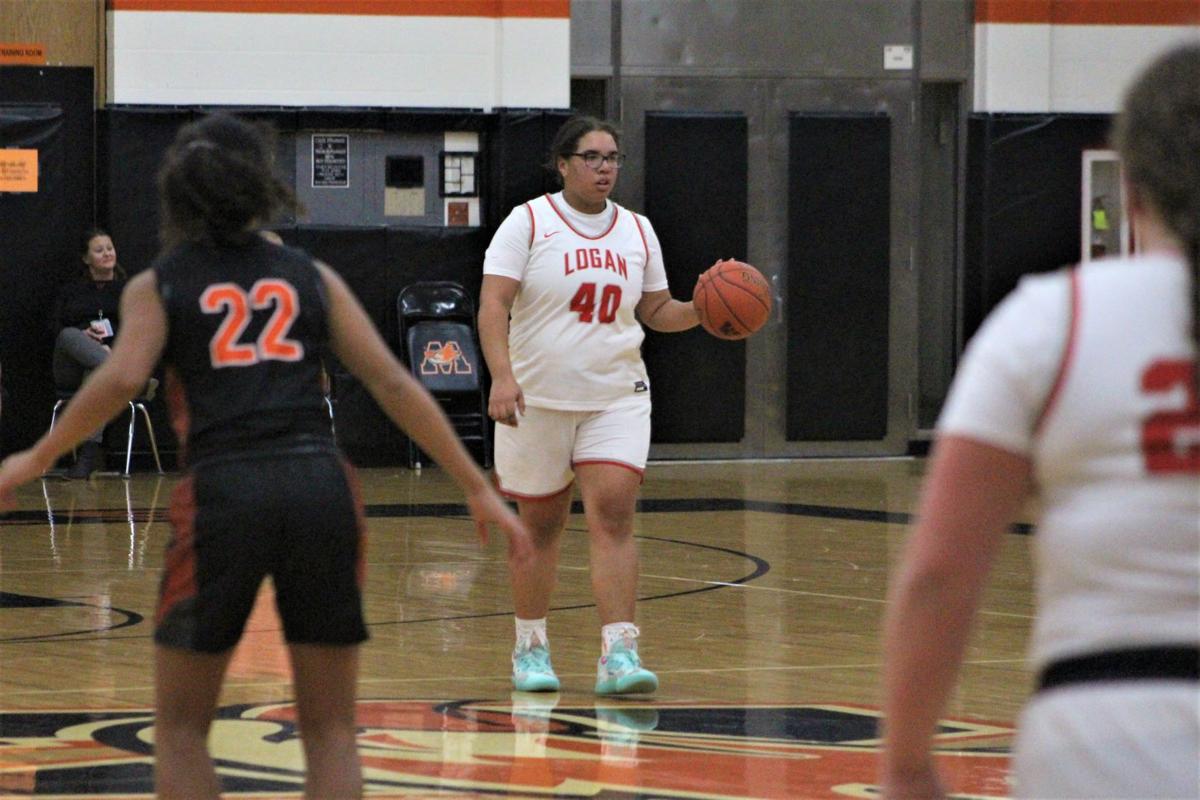 Senior Jojo Davis dribbles the ball up the court for Logan in a 63-47 win over Winona on Tuesday. Jojo and sister Jazzy combined for 52 of the Rangers' points in the game. 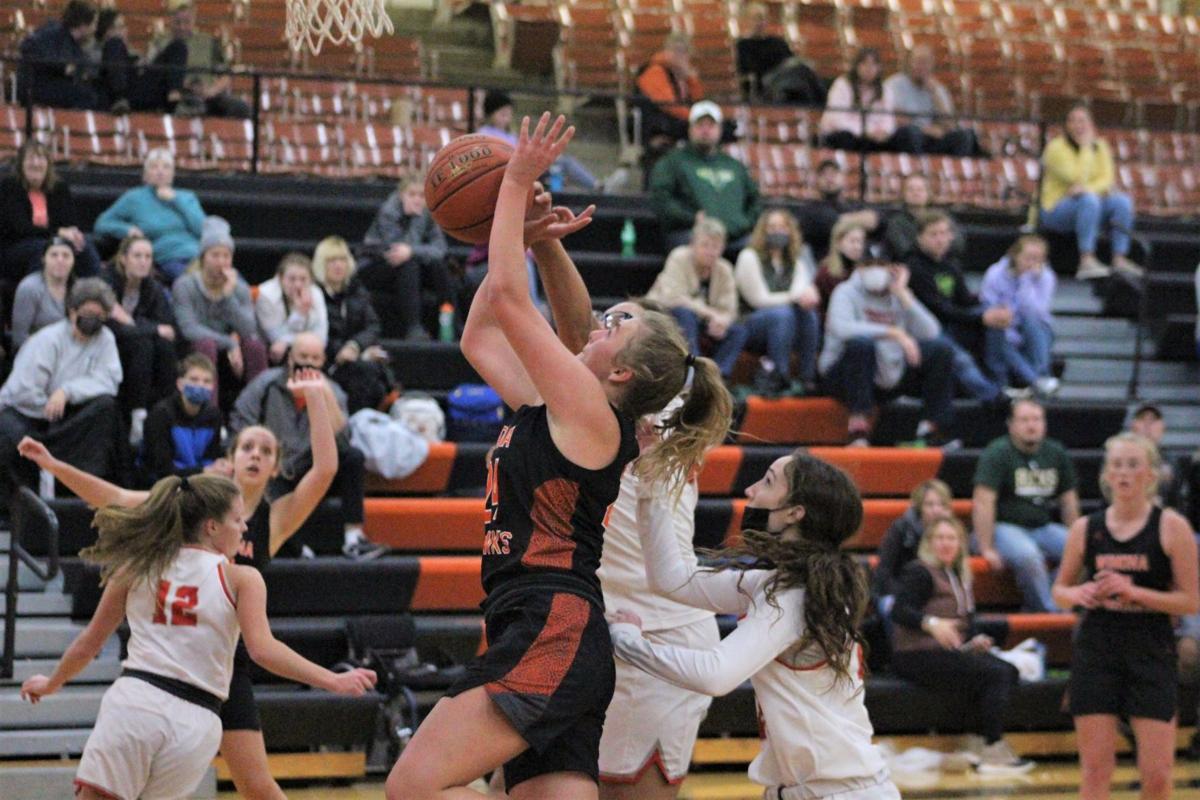 Senior Grace Quinn, center, gets fouled as she attempts a shot in Winona's 63-47 loss to La Crosse Logan on opening night Tuesday.

WINONA — Throughout the early season, there is certain to be a learning curve for the Winona Senior High School girls basketball team.

After losing 12 seniors off of last year’s team, the Winhawks return about 14 minutes of experience combined on this winter’s roster, and Logan took advantage of that Tuesday night.

That inexperience was on display as the Rangers (1-1) picked up their first win of the season by beating Winona 63-47.

Despite the double-digit-deficit final score, the game was a close one early on.

Logan scored first, but a couple quick 3-pointers by Winona put it ahead 6-2, then up to 7-2 off a free throw by seventh-grader Alivia Bell with 12 minutes, 36 seconds left in the first half.

The Rangers clawed back, eventually tying the game 11 at 8:54. Both teams traded the lead before Logan took a 17-16 lead on a layup by junior Jazzy Davis at 6:14, and from that point on, the Rangers never trailed again.

Winona’s young squad started the season opener with an energy level that coach Tim Gleason was happy with, though the team could not keep up the breakneck pace for the full 36 minutes.

“Early in the game, we dictated the tempo and the style of the game. I thought as we went we just got tired,” Gleason said.

Still, the Winhawks hung close for the remainder of the first half and only trailed 29-23 at the break.

Jazzy and older sister, senior Jojo Davis, were the driving force in the first half for Logan, combining for 23 of the team’s 29 points. By the end of the game, Jazzy led all scorers with 27 points while Jojo had 25.

The duo were firing on all cylinders, and their familiarity with each other were a major asset for coach Abby Wiedman and the team.

“They have this connection, the sister connection and this basketball connection," Wiedman said. "They know where each other are and they had really good games for us.”

After building up a modest first-half lead, the Rangers started to pull away early in the second half.

Logan outscored Winona 12-4 in the first four minutes for the game’s first double-digit lead at 41-27.

According to Gleason, maintaining intensity in those opening minutes of the second period is something he believes his team will improve upon as they get more experience.

“The first four minutes of the second half are so important. You’ve got to come back out and reestablish what you did to start the game. We just didn’t tonight,” Gleason said.

It was the opposite for Logan, who started slow but came to life at the start of the second half.

“We didn’t come out with 100% energy, so at halftime we really told them you’ve got to put your foot on the pedal and give it all you’ve got. I think we did that,” Wiedman said.

From that point on, Logan’s lead only increased by three points as the two teams played a fairly even game in the last 14 minutes.

While the Davis sisters led Logan, it was the seventh-grader Bell who came in off the bench and led the Winhawks in scoring with 11 points.

For someone who was playing with and against girls that were as many as six years older than her, Bell fit into the game well with her instincts that allowed her to play at a level above her age.

“She just has composure about her,” Gleason said. “Proud of how hard she works. Her feel for the game is pretty mature.”

VIROQUA — Gale-Ettrick-Trempealeau High School sophomore Cody Schmitz did it again, and his latest scoring outburst helped give his team a two…

Innovative insulation unveiled for Team USA ahead of Winter Olympics

How Motivated is Aaron Rodgers to Snap 0-3 Playoff Record Against San Francisco?

How Motivated is Aaron Rodgers to Snap 0-3 Playoff Record Against San Francisco?

NFL Divisional Round Preview: Expect a Dog Fight in Packers Vs. 49ers?

NFL Divisional Round Preview: Expect a Dog Fight in Packers Vs. 49ers?

Senior Jojo Davis dribbles the ball up the court for Logan in a 63-47 win over Winona on Tuesday. Jojo and sister Jazzy combined for 52 of the Rangers' points in the game.

Senior Grace Quinn, center, gets fouled as she attempts a shot in Winona's 63-47 loss to La Crosse Logan on opening night Tuesday.