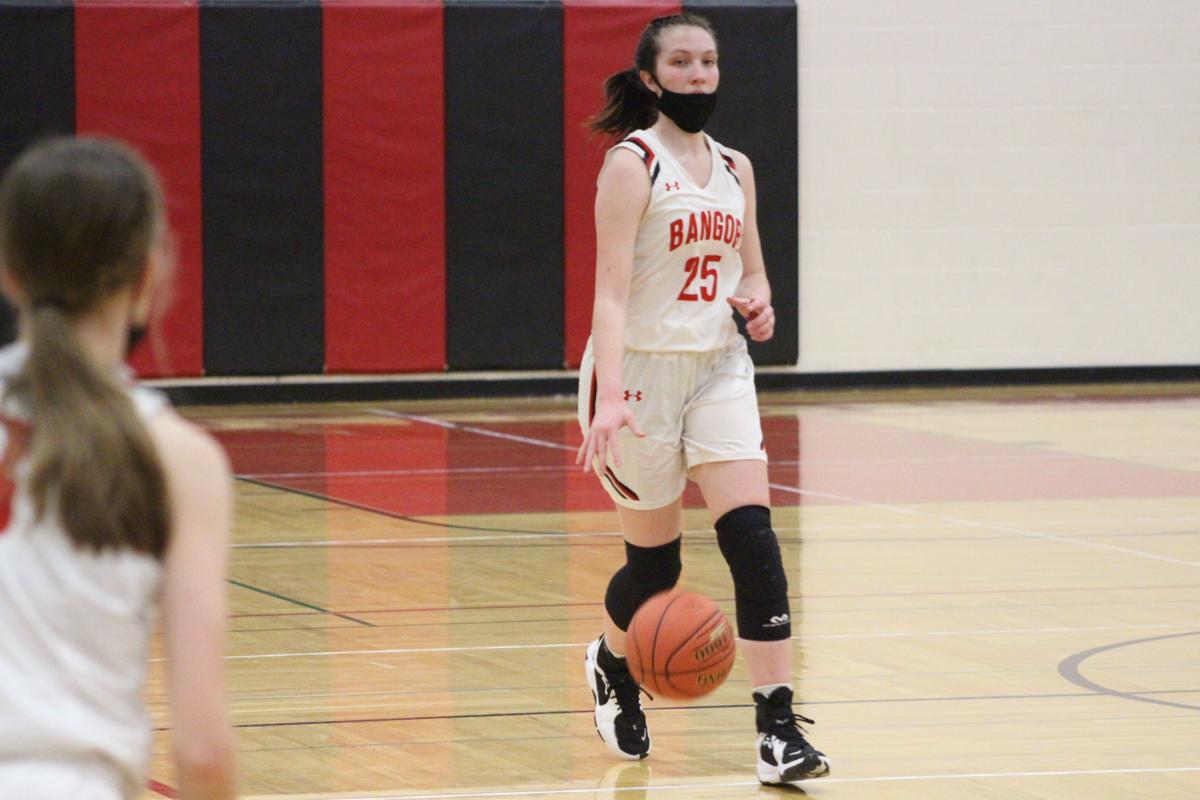 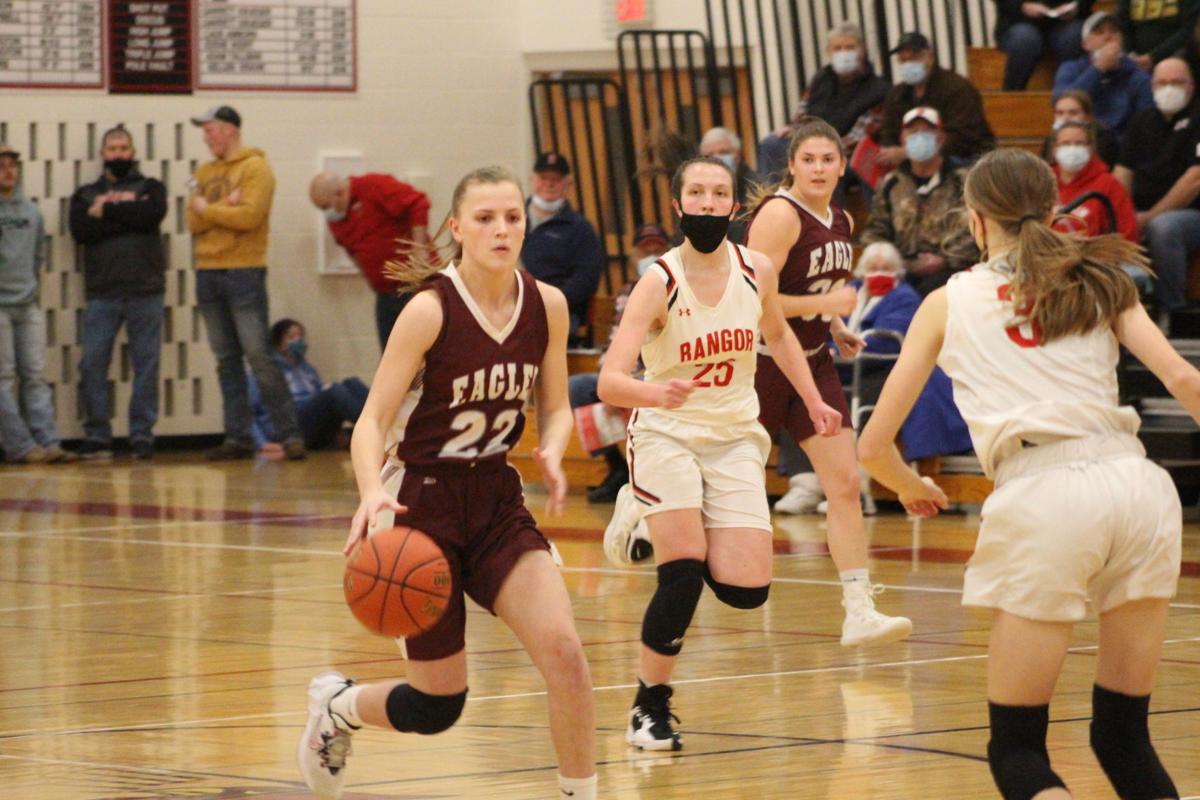 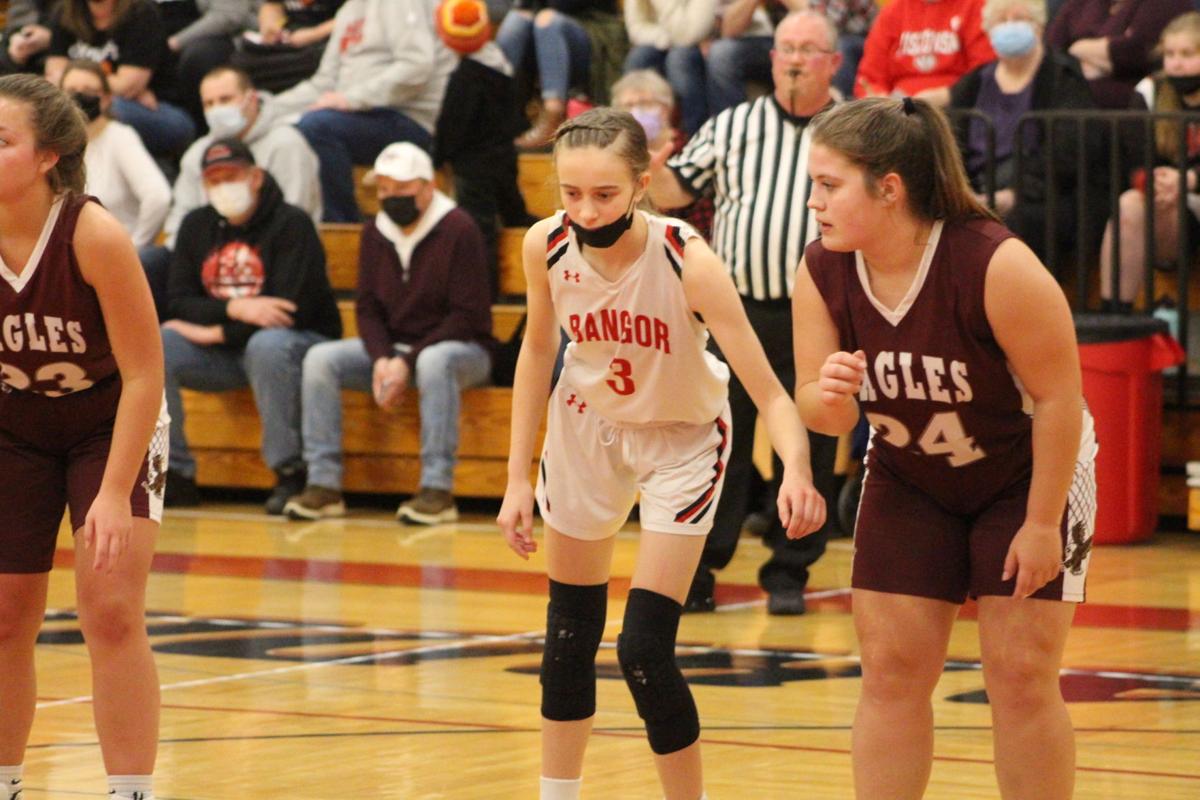 Bangor's Anna Fronk, left, awaits a free throw while lined up next to Cashton's Ella Brueggen on Thursday. The second-ranked and undefeated Cardinals beat the Eagles 91-50.

BANGOR — The whole thing started when Bangor High School junior Nora Tucker made what seemed like a harmless 3-pointer to give her team an early two-point lead on visiting Cashton.

But the Cardinals made sure everything went downhill for the Eagles from that point on during a Scenic Bluffs Conference girls basketball game on Thursday.

Bangor, which is ranked second in Division 5 by The Associated Press, used Tucker's 3-pointer to begin a 22-point run that set it on the path to a convincing 91-50 victory.

"We just want to keep proving to everybody that we're a good team," Bangor senior Aliyah Langrehr said. "Our shots fell early, and we did a really good job of shooting our 3s in this game."

Bangor made 14 3-pointers, and Tucker made four of them on her way to a game-high 20 points. Junior Joeryn Freit made three 3s and scored 13 points, and Langrehr made three 3s and added 11 to go with senior Taylor Jacobson's 12 points.

The Cardinals' early run concluded with two free throws by junior Gabby Schroeder and gave Bangor a 25-4 advantage with 9 minutes, 10 seconds remaining in the first half.

Bangor shook that little run off with consecutive 3s by Tucker, Jacobson and Langrehr to quickly push the lead back up to 36-14.

The Cardinals had six players make at least one 3-pointer, and all nine available players scored on Thursday.

"That helps a lot," Jacobson said of the balance. "If we have one girl who is having an off night, we can always count on somebody else. We always talk about if one night isn't your night, it could be the next one, and we're always ready for that."

Bangor's Anna Fronk, left, awaits a free throw while lined up next to Cashton's Ella Brueggen on Thursday. The second-ranked and undefeated Cardinals beat the Eagles 91-50.