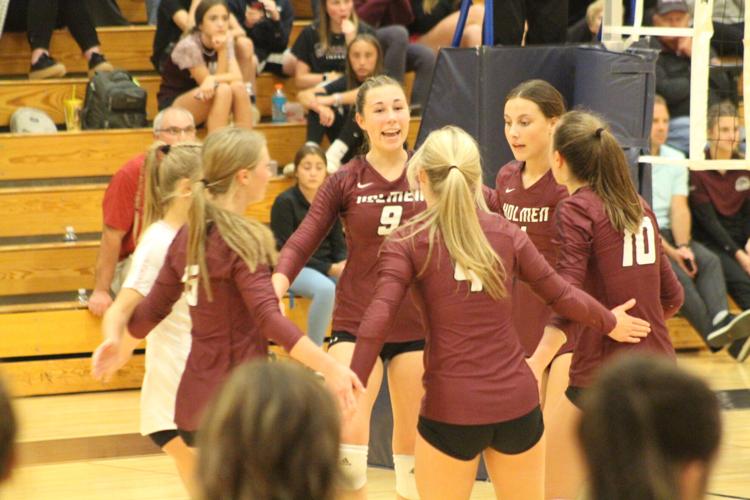 Holmen senior Lydia Olson (9) celebrates a point with her teammates at the Reinhart Athletic Complex on Thursday. The Vikings beat the Blugolds, 25-21, 25-9, 25-16 to take sole possession of the MVC lead. 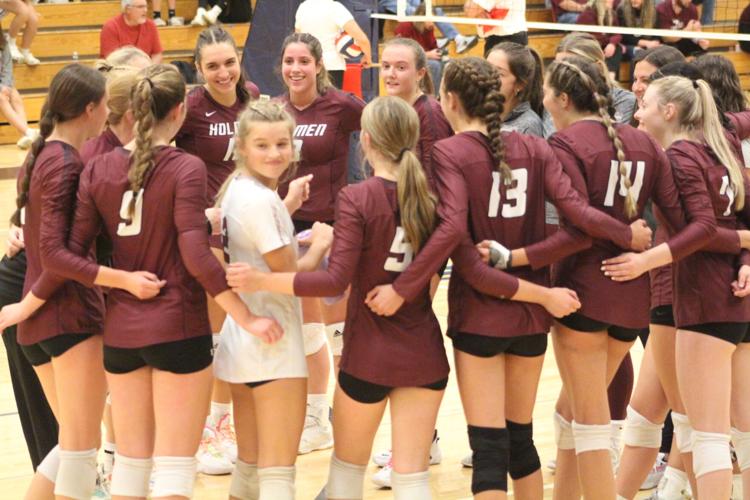 The Holmen High School volleyball team talks during a time in the third set of a 25-21, 25-9, 25-16 MVC victory over Aquinas at the Reinhart Athletic Complex on Thursday.

The Vikings had been here before — up two sets on Aquinas — but let a big victory slip away by losing the next three sets on their home court nearly one month ago.

Holmen had earned the right to be confident with its early play, but it also had to prove that it could close out a quality opponent like the Blugolds.

“We had to finish,” Winker said. “We had to focus and hone in on what we know as Holmen volleyball and play our game.

“We were coming off a good set, but we still had to be better at everything (the rest of the way).”

If the Vikings were nervous about letting another chance slip through their fingers, they didn’t show it as they completed a 25-21, 25-9, 25-17 MVC victory at the Reinhart Athletic Complex on Thursday.

Holmen (16-4 overall, 7-1 MVC) served, dug, passed and attacked its way to a significant victory that gave it sole possession of first place in the conference and some revenge after the Blugolds (18-7, 6-2) came back to win the first meeting in late August.

“We talked about staying calm and staying in the game,” Holmen coach Grabowenski said of discussion after the second set. “We knew we had a job to do and had to come out and stay confident and do the right things.”

Kline served the final six points of the first set, finished a nine-point run with an ace in the second and had another ace during a seven-point serving run in the third.

The Blugolds, who are ranked seventh in Division 3 by state coaches, put up their biggest fight in the first set. Aquinas led that one 21-19 — after trailing 9-3 at one point — before the Vikings ran the table.

“I think their energy was a lot higher than what we were putting out there, especially on points when we were behind,” Aquinas coach Nellie George said. “I think our kids know what to do in situations, but I think they struggled to make decisions in the moment tonight.

“I wish I could pinpoint it. I thought we received pretty well even though there were a few mistakes. I felt like we had some things going with our serve-pass.”

But if there was an important point to be had or one that provided something to rally around, Holmen won it, whether it came on a long rally or unexpected opportunity.

Junior Rayna McArdle had 20 assists to go with 13 digs and six kills for the Vikings, while Grace Eickhoff had 13 digs and 11 assists. Christnovich added three blocks and two aces.

“I think it was an all-around good team effort,” Olson said. “Our passing, our setters did a good job. Our hitters also did a good job of putting the ball down.”

The errors were few, and the thundering kills plenty for the Vikings, who seized control of the path to a conference championship. Holmen still has matches remaining with Logan, Sparta and Central, but taking care of business would make it a champ for the second straight year.

“We can really bring this momentum into our next (match) against Logan,” Winker said. “We just want to bring it and win (the) conference.” 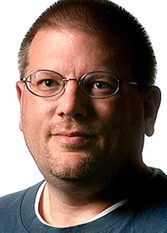 MADISON — The news was something Henry Suttie surely thought was the end of life as he knew it.

It isn’t apparent by looking at the final score, but the Aquinas High School girls basketball team didn’t get its season off to the best of st…

ONALASKA — TJ Stuttley sits in an exceptional spot as he gets ready to begin his sophomore season with the Onalaska High School boys basketball team.

SPARTA — Cody Schmitz and the Gale-Ettrick-Trempealeau High School boys basketball team kicked off the season with a bang Tuesday night.

Jack Taylor enjoys being known as ‘the video guy’ around Black River Falls.

MENDOTA HEIGHTS, Minn. – Senior Macy Donarski scored 22 of her game-high 36 points in the second half, but the Aquinas High School girls baske…

Milwaukee native Kobe Johnson wanted to prove himself against Wisconsin

Milwaukee native Kobe Johnson wanted to prove himself against Wisconsin

What Wisconsin men's basketball learned playing in the Bahamas

What Wisconsin men's basketball learned playing in the Bahamas

Holmen senior Lydia Olson (9) celebrates a point with her teammates at the Reinhart Athletic Complex on Thursday. The Vikings beat the Blugolds, 25-21, 25-9, 25-16 to take sole possession of the MVC lead.

The Holmen High School volleyball team talks during a time in the third set of a 25-21, 25-9, 25-16 MVC victory over Aquinas at the Reinhart Athletic Complex on Thursday.