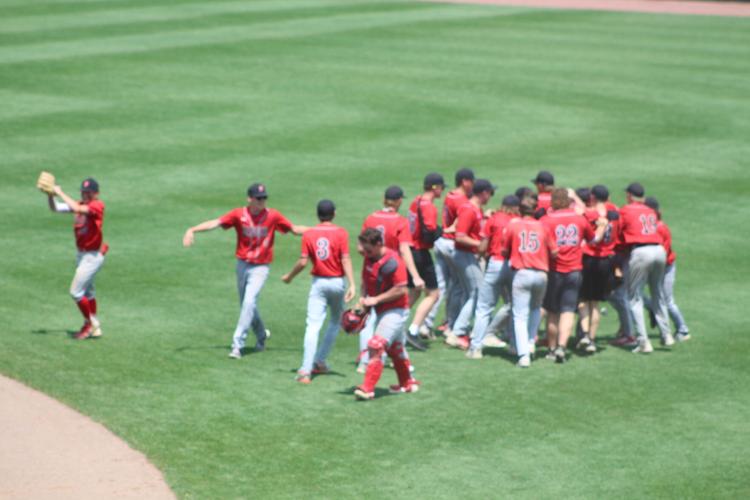 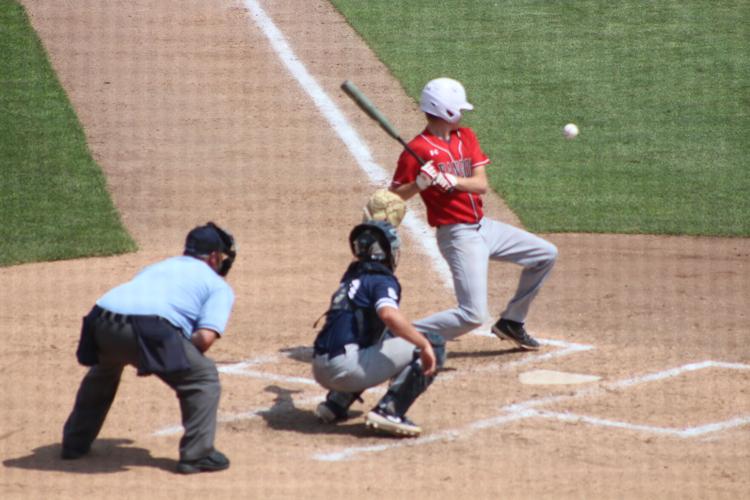 Bangor shortstop Will Reader leans back on an inside pitch during Wednesday's WIAA Division 4 state semifinal baseball game against Marshfield Columbus Catholic at Fox Cities Stadium in Grand Chute, Wis. 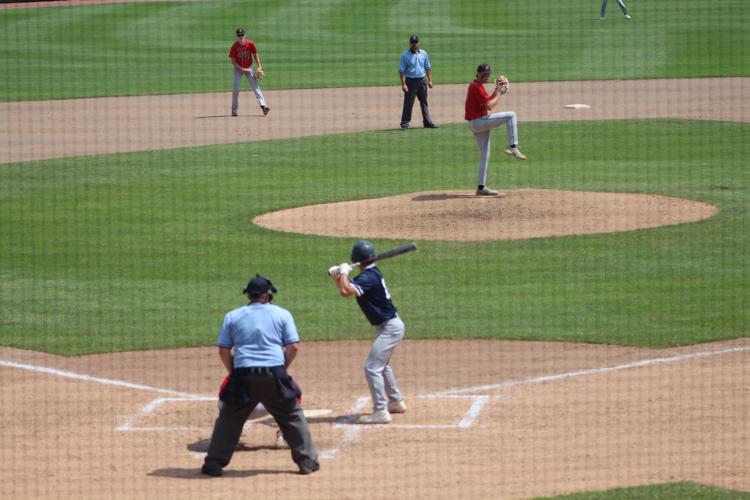 Bangor's Ashton Michek winds up to throw a pitch against Marshfield Columbus Catholic at Fox Cities Stadium in Grand Chute, Wis., on Wednesday. Michek struck out 10 and the Cardinals beat the Dons 9-8 in a WIAA Division 4 state semifinal. 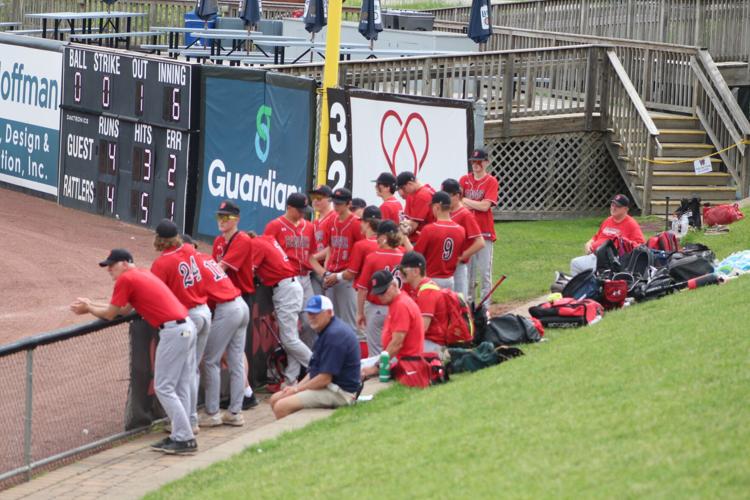 The Bangor High School baseball team waits its turn to take the field at Fox Cities Stadium in Grand Chute, Wis., on Wednesday. The Cardinals qualified for a WIAA Division 4 state semifinal against Marshfield Columbus Catholic.

GRAND CHUTE, Wis. – It can be difficult to determine where to start when describing a game like the Bangor High School baseball team’s 9-8 victory over Marshfield Columbus Catholic on Wednesday.

The easiest way to explain the outcome is the Cardinals will get a chance to play for a WIAA Division 4 championship on Thursday.

The more complex way to describe Bangor’s semifinal win on Neuroscience Group Field at Fox Cities Stadium entails the ins and outs of 12 runs being scored in the seventh inning and the game ending on a diving catch in right field.

“There may have been some random game in April some year (that was similar),” said Bangor coach Todd Grant, whose team meets top-seeded Eau Claire Regis (22-1) in a title game that is scheduled for 9 a.m. Thursday. “But considering the moment and it being at state?

“Yeah, that’s probably the craziest inning I’ve been a part of.”

A game that was scoreless through four innings turned into an offensive outburst that was enjoyed by both teams as they battled to qualify for the championship game.

The third-seeded Cardinals (22-5) scored seven runs in the top of the seventh inning to erase a one-run deficit only to allow the second-seeded Dons (20-4) to score five in the bottom of the seventh and put runners at the corners with two outs for Xane Adler, who started the inning with a leadoff single.

Adler tagged the pitch that sophomore Chase Horstman threw, but Samuel Cropp made the right break on the ball and made a successful dive that simultaneously let the Cardinals breathe a sigh and start a wild celebration in shallow right field.

“They started getting some hits, and then I walked a guy, hit a guy,” Horstman said of the Dons. “That’s on me, but Cropp made a great play in right field. I was just trying to throw strikes and let our guys make a play.”

Cropp did and it has Bangor in the championship game for the first time since 1996. The Cardinals beat Algoma 5-2 to win the Division 3 title two years before the tournament moved from Wausau to the Appleton area.

Bangor put itself in position to win when five of its 11 hits were pieced together in the top of the seventh. Columbus Catholic took a 3-2 lead in the bottom of the six to put pressure on the Cardinals, who started their rally when Evan Wolfe reached safely on an error with one out, then stole second base.

The Dons intentionally walked Cropp to get to Ashton Michek. He hit a sharp grounder to first base and the throw to second in the attempt at a double play sailed into the outfield. Wolfe scored on that to tie the game.

Mathieu Oesterle was then hit by a pitch, and that was followed by Horstman sending a pitch down the left-field line and to the wall for a two-run single that broke the tie. Eli Tucker added an RBI single and Wolfe a two-run single to center to give the Cardinals all of the momentum with just three outs left to get.

“We were just looking for hits, to get on base and to have good at-bats,” said Michek, who was 1 for 3 and scored twice. “We started to hit the ball like we know we can. We had some hits here and there earlier in the game, but we really came alive that last inning.”

That was half the battle.

The other was stopping the Dons, who had three singles and a run before Horstman got an out in the bottom of the seventh. The walk and hit better Horstman mentioned also brought runs in before catcher Cole Timmler – a thorn in Bangor’s side the entire game – hit a two-run single to right.

That brought up Adler with the game on the line. While he got a good piece of the pitch he lined to right field, Cropp made the right read on the ball and hauled it in to end the game.

“Off the bat, I thought it was another base hit,” said Michek, who played first base the last two innings after pitching the first five. “Then I saw Cropp come in and make that dive.

Wolfe, Horstman, Will Reader and Dawson Daines all had two hits for Bangor. Reader hit a two-run single in the sixth inning, and Daines drove in a run with his seventh-inning single.

Michek set the tone of the game early with his strikeout power. The Dons stranded two runners in the second, three more in the third and two more in the fourth – six of the seven in scoring position.

Michek, an Augustana University (S.D.) commit, finished the second with two strikeouts, struck out Adler with the bases loaded in the third and struck out three in a row after two errors put runners at second and third with no outs in the fourth.

“They were pesky, and I thought they did a really good job of working the count and driving (Michek’s) pitch count up,” Grant said. “That’s what you expect at this level.”

Michek survived by striking out 10 while allowing his fifth and sixth earned runs of the season. Bangor’s defense made four errors, but Michek was almost always there to close the door of opportunity.

Bangor shortstop Will Reader leans back on an inside pitch during Wednesday's WIAA Division 4 state semifinal baseball game against Marshfield Columbus Catholic at Fox Cities Stadium in Grand Chute, Wis.

Bangor's Ashton Michek winds up to throw a pitch against Marshfield Columbus Catholic at Fox Cities Stadium in Grand Chute, Wis., on Wednesday. Michek struck out 10 and the Cardinals beat the Dons 9-8 in a WIAA Division 4 state semifinal.

The Bangor High School baseball team waits its turn to take the field at Fox Cities Stadium in Grand Chute, Wis., on Wednesday. The Cardinals qualified for a WIAA Division 4 state semifinal against Marshfield Columbus Catholic.