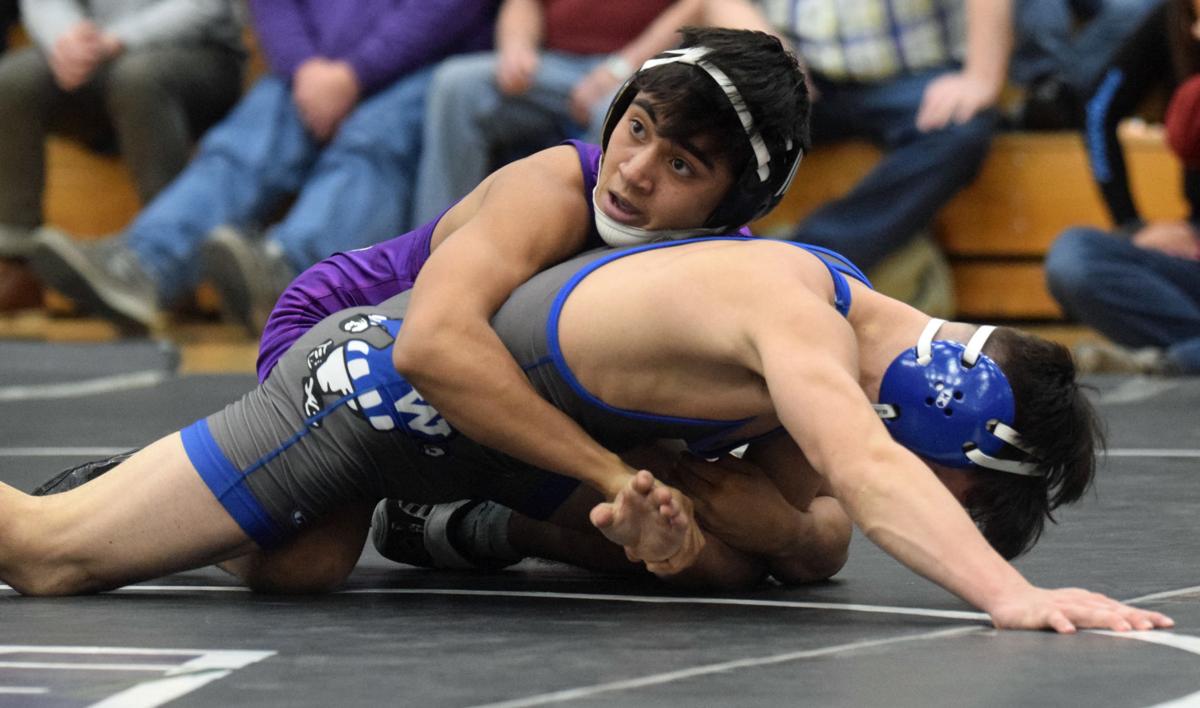 Stoughton sophomore Nicolar Rivera, top, enters the WIAA Division 1 state wrestling tournament with a 44-0 record. He will compete at 120 pounds. 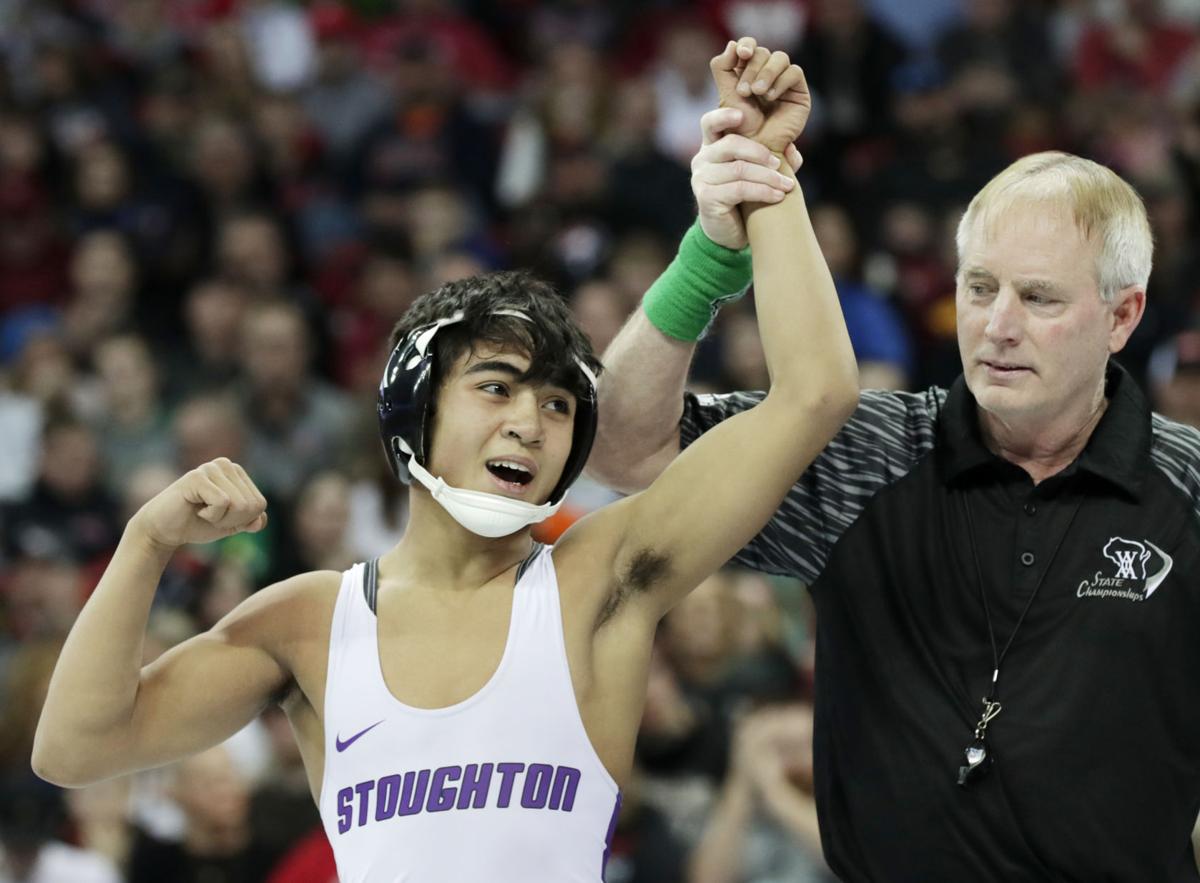 The ultra-quick Rivera likes to create during matches and often confounds opponents with his style.

“My technique is kind of unique,” he said. “It’s like nobody can stop it. I don’t know (what makes it unique). I kind of make up moves.”

Through hard work, a passion for competition and his own style, Rivera has remained undefeated through his first two prep seasons.

Rivera won the WIAA Division 1 state championship at 106 pounds last year as a freshman — compiling a 55-0 record through individual state and a 58-0 overall mark, including team state. He now takes a 44-0 record into this year’s WIAA state wrestling tournament, which begins Thursday at the Kohl Center.

Rivera, who wrestled the majority of his matches at 126 pounds this season, qualified for the state tournament as a sectional champion at 120 pounds. He faces Glendale Nicolet junior Aaron Johnson in the first round.

“The biggest thing is he enjoys competing,” said Bob Empey, Stoughton’s co-coach with Dan Spilde. “That is probably the biggest identifying factor. And he has been healthy at the right times of the season, as well. … I think his style is unique, but it is a style all his own. It is tough to prepare for, it really is.”

Vikings senior Gavin Model, who has committed as a preferred walk-on to the University of Wisconsin, has first-hand experience with Rivera’s style. Sometimes, Rivera scraps with heavier wrestlers such as the 145-pound Model and 152-pound junior Luke Mechler in the Stoughton wrestling room.

“It’s crazy,” Model said. “His style is so different. He can wrestle with us bigger guys and be able to take us down and use his technique to his advantage. As you grow up, you slowly learn to feel these (moves) coming (when facing other wrestlers).

“But (against Rivera) you don’t really know what is coming and you don’t know what move he has. It’s not the first move that he gets. It’s the third or fourth in a chain of movements that he gets you in, which is impressive that he can just keep moving.

“We call it flowing and he flows to the next move so fluently that it kind of throws guys off and they are not really ready for that, especially at this high school level.”

Rivera, who began wrestling as a kindergartner and has developed into a national age-level champion in freestyle and Greco-Roman wrestling, credited his father, Manasehs, and mother, Khammah, with helping him throughout his wrestling journey.

His father, who wrestled at Janesville Parker, and his mother, who studies videos of the sport, have assisted with his learning and developing moves, Nicolar Rivera said.

“His style is very unorthodox,” Mechler said. “You don’t see a lot of people wrestle like he does. He is extremely talented and he uses that to his full advantage. He has a very unique style. … He’s really quick. He’s got weird hips. It’s an unorthodox style on his feet and on the mat.”

Spilde said a big part of Rivera’s success is his love for competition.

“He just lives for it,” Spilde said. “He loves to compete and once he gets on the mat, it’s a combination of the work he’s put in and his body awareness, being so above everyone else, and his cat-like reflexes. And his transition from move to move is so fast that most people have trouble keeping up with it.”

If others suggest Rivera should focus more on sound, fundamental technique, Spilde said: “Quite frankly, for him, that wouldn’t be as much fun. He likes to open it up and try new things.”

“A lot of people watch him wrestle and they say that he’s funky or they say he’s unorthodox,” Spilde said. “But a lot of that is just him experimenting. He likes to find new ways to score.

“He can put himself in awkward positions and come out of them because of his body awareness and his transition from move to move. So, he doesn’t get in trouble as easily as most kids do when they are in an awkward position.

“I think that’s why he has been able to experiment and create ways to score off of positions other people shouldn’t get in, which is very unique and it is what has helped him succeed.”

Rivera is one of seven returning champions in Division 1. Stoughton has the most individual titles with 51, one ahead of Mineral Point. Rivera was No. 50 and then-senior Hunter Lewis at 138 became No. 51 last year for the Vikings.

“To send half of your team is a statement,” Spilde said.

Mechler and Brooks Empey finished as state runners-up at 145 and 195 pounds, respectively, last year. That fueled both wrestlers this season.

“I feel like at this point I’m ready for whatever is thrown at me,” Mechler said. “I’m confident that I’m going to go and win the tournament. That is my mindset all the way through.”

Mechler said his style is collected and technical — different from Rivera’s.

“I don’t take a lot of unnecessary risks,” Mechler said. “I stick to high-percentage moves. (His is) high-risk, high-reward.”

Said Spilde: “Most athletes just want to get to what works and score, and make sure there are no risks. (Rivera) enjoys the risks because that’s what makes it challenging for him.”

The nationally-ranked Rivera has aspirations to wrestle at the NCAA Division 1 level and beyond, possibly internationally and as an Olympian. Spilde believes the sky is the limit for Rivera, based on the talent Rivera possesses.

“He’s a great kid to be around,” Model said. “I think he’s a great guy for the team. He gets everybody amped up at tournaments.”

For now, Rivera is focused on repeating as a state champion.

“I’m feeling better than ever,” Rivera said. “I came off some injuries (earlier in the season). I’m feeling great.”

Stoughton sophomore Nicolar Rivera, top, enters the WIAA Division 1 state wrestling tournament with a 44-0 record. He will compete at 120 pounds.