Columbus Blue Jackets goaltender Matiss Kivlenieks died of chest trauma from an errant fireworks mortar blast in what authorities described Monday as a tragic accident at a Michigan home on the Fourth of July.

Police in Novi, Michigan, said the firework tilted slightly and started to fire toward people nearby Sunday night. The 24-year-old Kivlenieks was in a hot tub and tried to get clear with several other people, police Lt. Jason Meier said. Authorities earlier said the Latvian had died of an apparent head injury during a fall, but an autopsy clarified the cause of death.

The fire department and EMTs got to the home shortly after 10 p.m. and took Kivlenieks to a hospital, where he was pronounced dead, Meier said. The Oakland County Medical Examiner’s office reported preliminary autopsy results Monday afternoon.

Prior to the autopsy, police said Kivlenieks was believed to have slipped and hit his head on concrete while running from a malfunctioning firework.

“At the moment, we’re pretty certain this was a tragic accident,” Meier said.

Columbus general manager Jarmo Kekalainen tweeted: “Life is so precious and can be so fragile. Hug your loved ones today. RIP Matiss, you will be dearly missed.” Blue Jackets president of hockey operations John Davidson called it a “devastating time” for the team.

“Kivi was an outstanding young man who greeted every day and everyone with a smile and the impact he had during his four years with our organization will not be forgotten,” he said.

Kivlenieks’ death came on the eve of Game 4 of the Stanley Cup Final in Montreal. Bell Centre held a moment of silence for Kivlenieks prior to the national anthems, and Tampa Bay Lightning coach Jon Cooper offered remarks about Kivlenieks after his team's overtime loss to the Canadiens.

“I just want to give our heartfelt condolences to the Kivlenieks family,” Cooper said. “It’s an awful tragedy for anybody, any family to go through that. But somebody in the NHL family, as close as we all are as the teams even battling out there, from all the Lightning, our condolences.”

NHL Commissioner Gary Bettman said Kivlenieks’ “love for life and passion for the game will be deeply missed by all those who have been fortunate to have him as a teammate and a friend.”

The Latvian Hockey Federation called Kivlenieks’ death “a great loss not only for Latvian hockey but for the entire Latvian nation.”

Kivlenieks most recently represented Latvia this spring at the world hockey championship in which he played four games. He played two games for the Blue Jackets and eight for the American Hockey League’s Cleveland Monsters this past season.

A native of Riga, Latvia, Kivlenieks signed with the Blue Jackets as a free agent in May 2017 and played eight games for the club overall. He was seen as a possible No. 2 goaltender next season if Joonas Korpisalo or Elvis Merzlikins is traded.

Kivlenieks was at Mid-Ohio Sports Car Course in Lexington last Tuesday as a guest of IndyCar driver Alexander Rossi. Rossi announced that day he was going to race in Mexico in November, and Kivlenieks took a ride around Mid-Ohio in a Honda Ridgeline to help promote both Rossi and Sunday’s IndyCar race.

“This hits hard,” Rossi tweeted. “Prayers to the family and the team.”

Meier said the autopsy findings prompted officers to re-interview some witnesses. He said police will continue trying to interview as many people as they can who were there.

“We’re starting to put together a pretty good picture of what occurred,” he said.

Meier said police who responded to the emergency calls said there was a “large gathering” at the home but he didn’t have an estimate of how many people were there.

Meier would not provide the address of the property in Novi, a northern suburb of Detroit. A police report had not yet been completed.

“What a tragic loss for all of us who knew him and I am thinking and praying for his family,” former Blue Jackets captain Nick Foligno tweeted. “Heaven gained a darn good goalie and better person… Just, way too soon.”

“That was a brutal wakeup this morning,” Savard said in French. “That was a good kid with a lot of talent who was going to be a part of the team next year or in the future. That’s extremely sad.”

Travis Chrisman and Steve Graves are in the fireworks business. 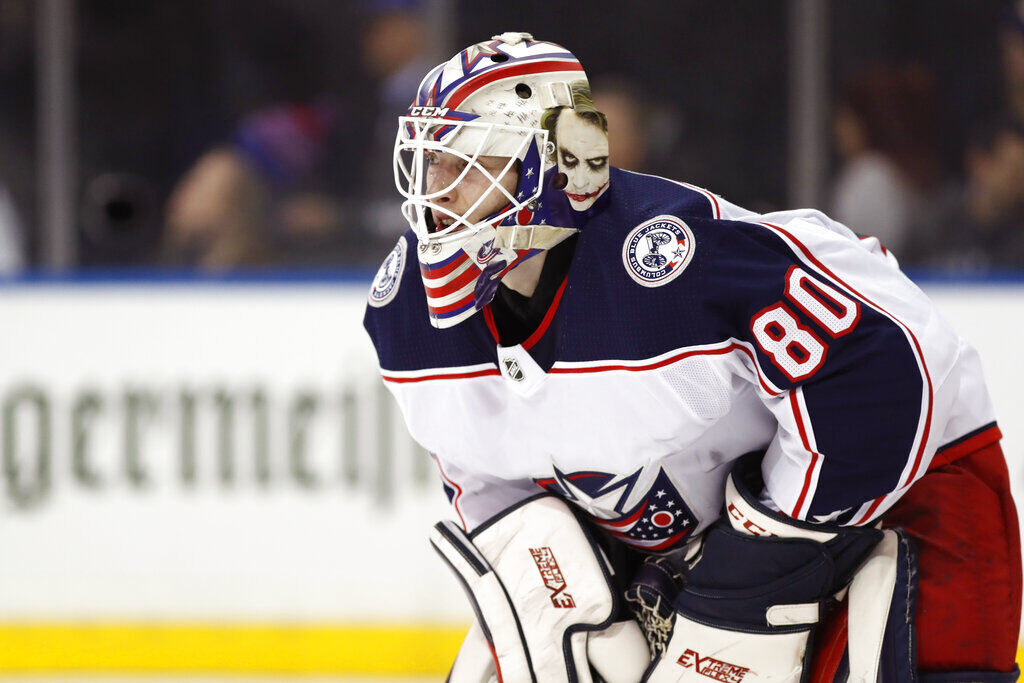 FILE - Columbus Blue Jackets goaltender Matiss Kivlenieks (80) is shown during the second period of an NHL hockey game in New York, in this Sunday, Jan. 19, 2020, file photo. The Columbus Blue Jackets and Latvian Hockey Federation said Monday, July 5, 2021, that 24-year-old goaltender Matiss Kivlenieks has died. The team said in a statement Kivlenieks died from an apparent head injury in a fall after medical personnel arrived. It was not immediately clear what caused the fall or where he was at the time of the incident, and multiple messages were left with team and national federation personnel that were not immediately returned.(AP Photo/Kathy Willens, File) 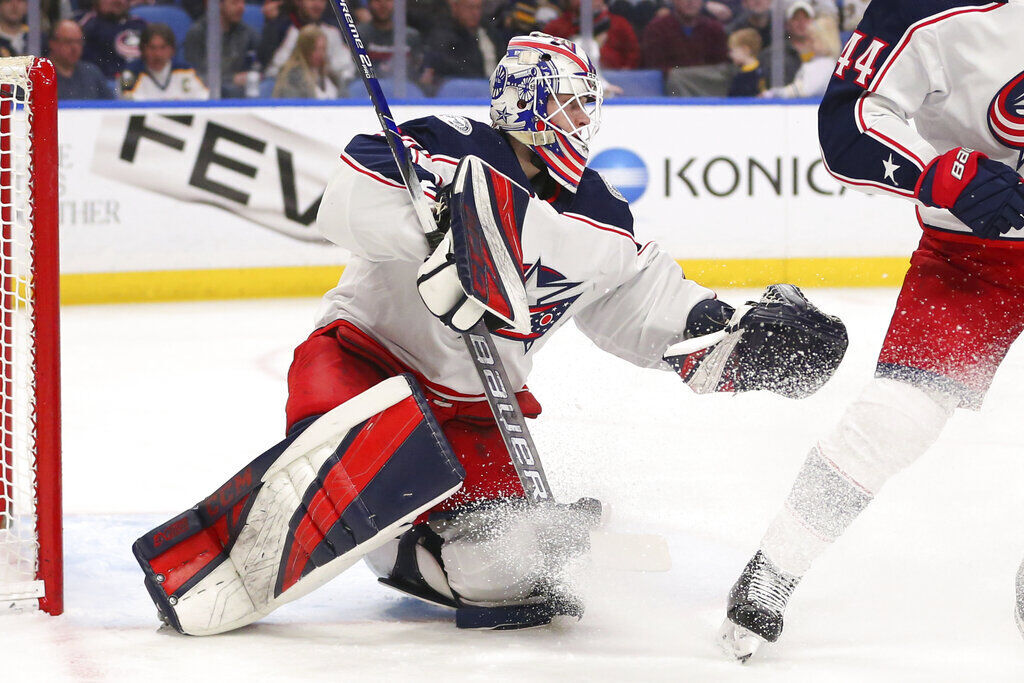 Columbus Blue Jackets goalie Matiss Kivlenieks (80) makes a save during the first period of an NHL hockey game against the Buffalo Sabres in Buffalo, N.Y., in this Saturday, Feb. 1, 2020, file photo. 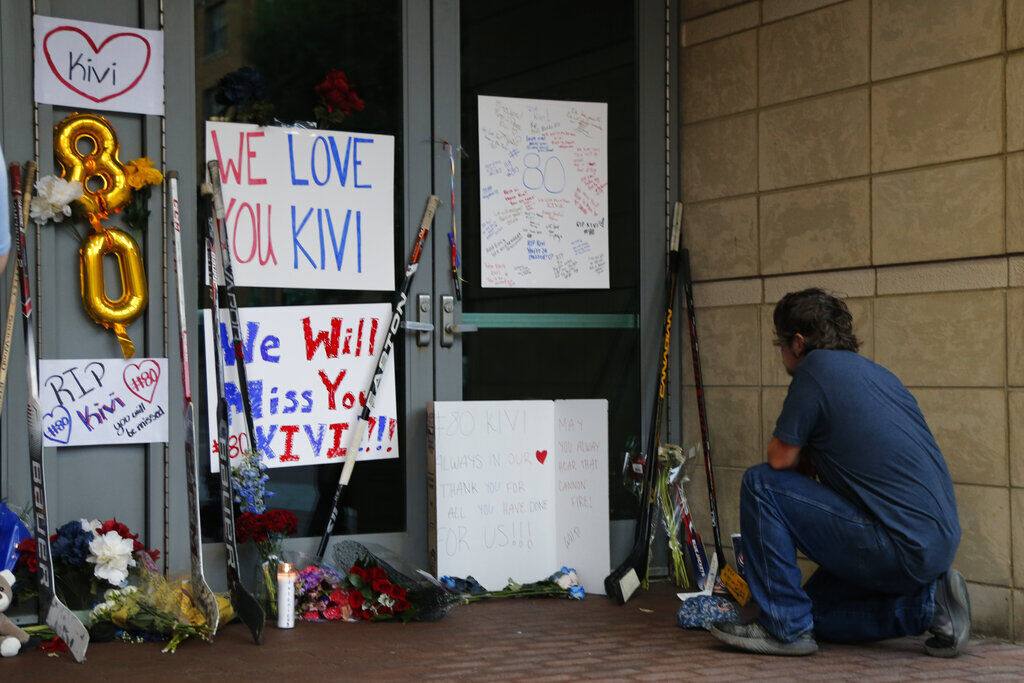 Kole Northup visits a makeshift memorial in front of Nationwide Arena Monday, July 5, 2021, in Columbus, Ohio, to remember Columbus Blue Jackets goaltender Matiss Kivlenieks who died of chest trauma from an errant fireworks mortar blast in what authorities described Monday as a tragic accident on the Fourth of July.