Become a Member
Read Today's E-edition
Share This
UW-La Crosse football: Eagles eager to 'see what we're really made of' against top-ranked North Central
0 Comments
Share this
1 of 2 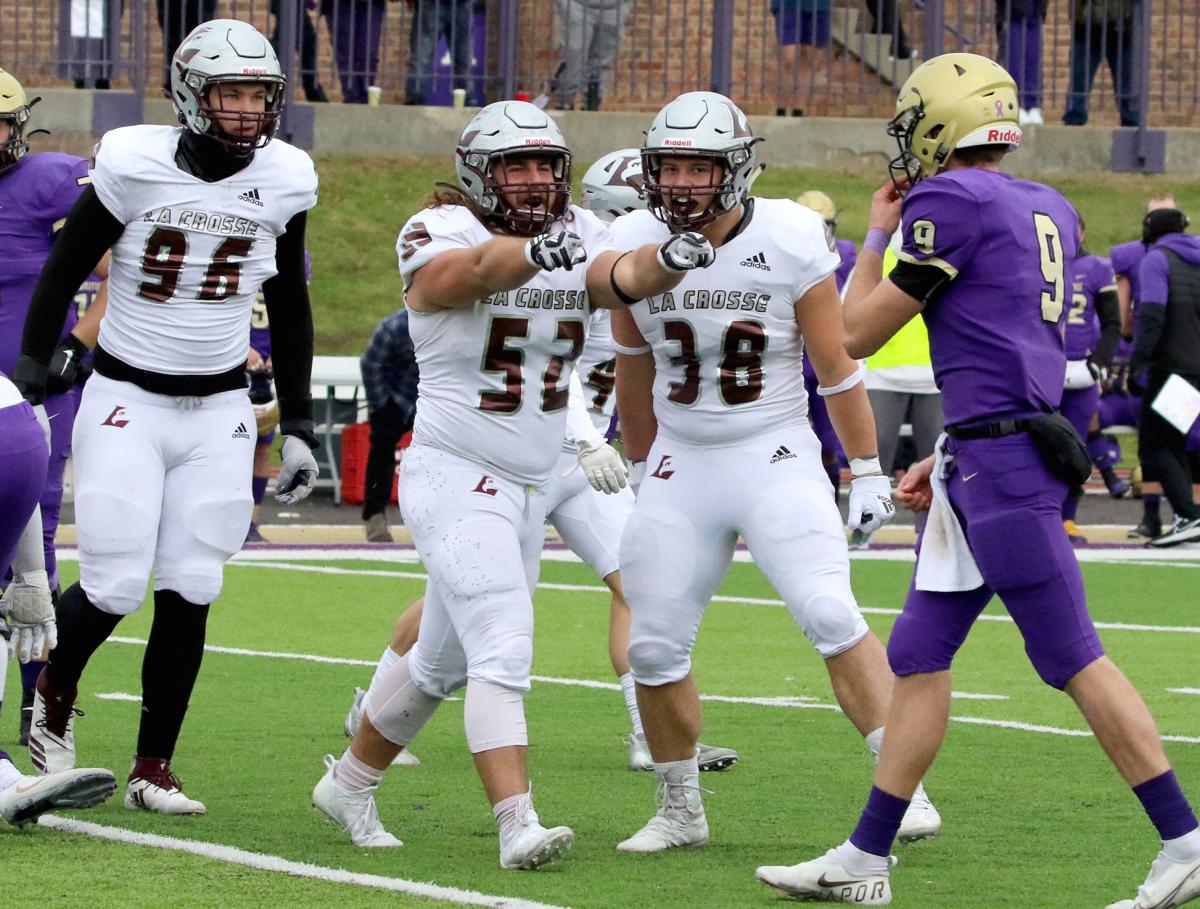 UW-La Crosse defensive lineman Ryan Gengler (52) celebrates with Josh Dorschner (96) and AJ Spychala during last week's game at Albion. The Eagles will need the defensive line to play well against North Central in the second round of the playoffs. 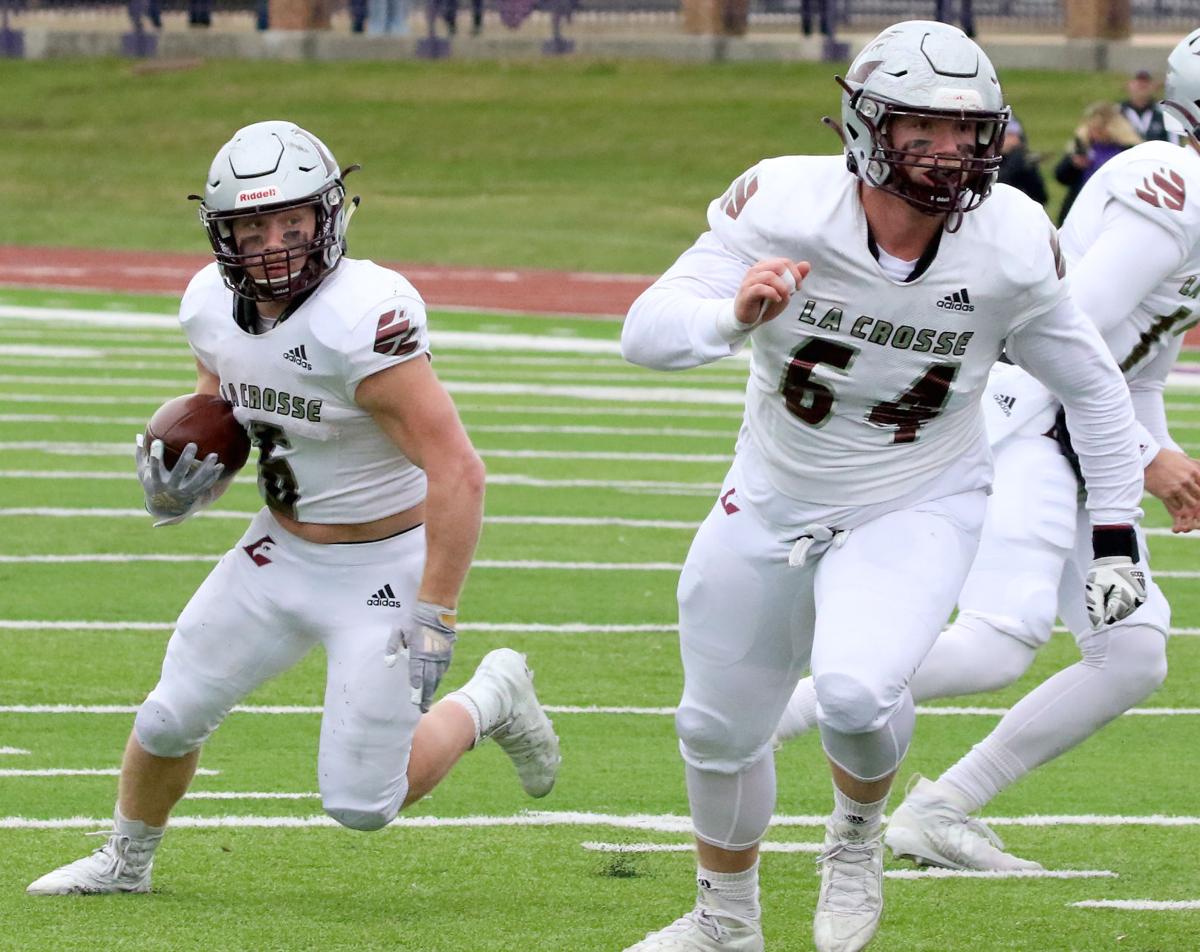 UW-La Crosse running back Joey Stutzman carries the ball during a game this season. Stutzman and the offensive line hope to build on their solid performance from the first round of the playoffs on Saturday.

The 11th-ranked Eagles proved that earlier in the season by leading Grand Valley State (Mich.) — one of the best teams in NCAA Division II — into the second quarter. They proved it by nearly coming back to beat third-ranked UW-Whitewater. And they proved it by trouncing Albion (Mich.) in their first Division III playoff appearance since 2006.

And while those experiences will certainly help UW-L in the second round of the playoffs this weekend, a challenge still awaits.

On Saturday, the Eagles will play at North Central (Ill.), the top-ranked team in the country and the defending national champion. Kickoff is scheduled for noon.

“We know — from playing some of those teams earlier in the season — we can play with anyone in the country,” senior wide receiver Jake Simuncak said. “So now it’s more of like, ‘How good do you think you are? How bad do you really want it?’

“The No. 1 team in the country, they’re there for a reason, right? So let’s see what we’re really made of.”

Transfer quarterback Jakob Parks returned from a neck injury and completed 24 of his 30 passes for 285 yards and five touchdowns, while UW-L piled up 264 rushing yards — led by 136 yards and a touchdown from junior running back Joey Stutzman.

Along with that, Simuncak believes the lessons the team has learned from its losses to Grand Valley State and UW-Whitewater have positioned the Eagles well to be successful on Saturday.

“I think the biggest for us is just knowing any mistake could really cost the game, especially when both teams are so good,” he said.

And the margin for error will be minuscule against North Central.

The Cardinals, who advanced to the second round after its first-round opponent withdrew from the playoffs because of positive COVID-19 tests, are 10-0 and won those games by an average of 49 points en route to the College Conference of Illinois & Wisconsin title.

And while the defense has played well and allowed only 10.7 points per game, North Central’s success has started with its offense — which is the best in the country in terms of points per game (59.7) and second in terms of total offense (589.5 yards per game).

Freshman quarterback Luke Lehnen has been efficient, completing 66% of his passes for 2,611 yards and 26 touchdowns against six interceptions, but the Cardinals have relied on the ground game to set the tone.

Junior running back Ethan Greenfield has totaled 1,141 rushing yards and 19 touchdowns while averaging an eye-popping 8.2 yards per carry, and junior running back Terrence Hill has added 83 carries for 646 yards and 12 scores to give North Central a potent one-two punch.

Toss in Lehnen’s ability to make plays with his legs — the quarterback has rushed for nine touchdowns to go with 392 yards — and the Cardinals average 311.6 rushing yards per game.

“I think you’ve got to try to take that away or at least try to stop their run game first,” UW-L head coach Matt Janus said. “Not that they’re not good on the outside or that the quarterback doesn’t have a great arm, but we’ve got to at least try to do that and try to force them to beat us over the top.”

The good news for the Eagles is that they are coming off of their best defensive effort against the run, having suffocated Albion for a total of minus-1 rushing yards. That performance started with strong play from the defensive line, which will try to replicate it on Saturday.

“They’ve got some talent on their O-line, I think,” senior defensive tackle Ryan Gengler said. “But, I mean, if we control that line of scrimmage, I think we’ll be just fine.”

UW-L’s offense could also help neutralize North Central’s offense by sustaining drives — which would not only give the defense a break, but would also keep the Cardinals’ offense off the field.

“We cannot have three-and-outs against this team,” Stutzman said. “I think we understand that.”

Another good showing from Stutzman and the offensive line will be key in that, and Simuncak believes the Eagles have enough weapons to keep up with North Central.

And one thing is for sure: UW-L won’t be intimidated by facing the No. 1 team on the road.

“It’s going to be fun. I can’t wait,” senior middle linebacker Rusty Murphy said. “You can speculate all you want, but I keep telling our guys, ‘It’s the playoffs. You just don’t know. Teams get really hot in the playoffs, teams get cold.’

“‘It’s kind of, ‘Nothing else matters, go play on Saturday.’”

ABERDEEN, S.D. — The Viterbo University men’s basketball team outscored Presentation in each half on the way to a 79-68 NSAA victory on Friday.

UW-La Crosse defensive lineman Ryan Gengler (52) celebrates with Josh Dorschner (96) and AJ Spychala during last week's game at Albion. The Eagles will need the defensive line to play well against North Central in the second round of the playoffs.

UW-La Crosse running back Joey Stutzman carries the ball during a game this season. Stutzman and the offensive line hope to build on their solid performance from the first round of the playoffs on Saturday.