The Onalaska High School football team did something on Friday night that seemingly no other defense in state could do: They made Johnny Davis look human.

To be fair, there wasn’t a whole lot of help surrounding Davis, especially after the season-ending injury to his brother Jordan earlier, but this was the same offense that put up 500 yards and 33 points against Sparta just the week before. Davis had 406 yards passing and four total touchdowns to push his season totals to an eye-popping 1,465 yards passing and 1,123 yards rushing, as he entered a showdown with the Hilltoppers on Friday night.

Let me repeat that.

That’s why sports editor Todd Sommerfeldt and I mentioned in our weekly preview video that we didn’t think anyone could slow him down. But it took just one defensive series at Veterans Memorial Field to realize I was wrong.

It was when Davis had tried to get to the outside on a scramble, something to which everyone in the area had grown accustomed. But this time he couldn’t get the edge. A sea of Onalaska defenders cut him off, so he stopped and switched directions before another sea of Onalaska defenders swarmed and brought him down behind the line of scrimmage. It looked like there was about 15 Hilltoppers on the field, and they were all playing with an energy that Central just simply couldn’t match.

I saw the Hilltoppers come out with this same energy in a blowout victory over Logan earlier this season. It was a week after Onalaska felt like it blew a game — a 24-23 loss at Lake Mills — the previous week. So I wondered what the source was behind the latest resurgence for these supercharged Hilltoppers. I found out at halftime.

That is when Hilltoppers coach Tom Yashinsky looked at me and said as he was running off the field, “I thought you said we couldn’t stop him,” referencing our preview video.

I learned that Yashinsky sent the whole Hilltopper team our video and well, they were looking forward to proving the Tribune and I wrong.

“"My wife said, 'Hey, have you listened to it? They said that they don't think you can slow them down,'" Yashinsky said. "So I immediately put it on Hudl and sent it to the guys and said, 'Hey, they said we can't stop them. Go have a listen.' I love that stuff, and I know you guys are just doing your job, but we had a confident group coming in."

If you don’t like something I say, prove me wrong, and I will give you the credit that you deserve. And the Hilltoppers did just that, holding Davis to a shocking 2 of 13 passing for 13 yards and just 38 yards on the ground on 12 carries while holding the Red Raiders to less than 100 yards of total offense.

It was a butt whipping.

The Hilltoppers were not only able to come up with a strategy to stop Davis, they were able to execute it. Executing can be much more difficult than game-planning. Onalaska made a wall of defenders in front of Davis and kept everything in front of it.

Davis couldn't get to the edge, where is so dangerous. Unlike other schools, the Hilltoppers have the athletes to stop him from doing that. Defensive end Conner Haggerty, who just co

mmitted to play at Winona State, along with linebacker Nathan Lubinsky, David Luck (who was moved to a defensive end/outside linebacker hybrid role against Central) and defensive back Hank Olsen are just a few of a list of athletic defensive playmakers for the Hilltoppers.

Onalaska’s ability to flow and swarm to the ball is something I have only seen a handful of times. But the truth is this defense has been absolutely dominating throughout the season. In MVC play the Hilltoppers have allowed just 26 points in five conference games with 14 -- one touchdown on a kickoff return — coming in a 21-14 victory over Sparta.

“It’s awesome, because we finally felt it coming,” Luck said after Friday’s game. “The past three years, we were kind of inexperienced, and then last year we had a lot of injuries. We are all healthy now, and I just think we are all starting to get lathered up now.

“Last year after football ended, everybody was up in the weight room in the morning. We just knew we had one last shot to go out on top.”

The Hilltoppers will have that shot when they host Holmen on Friday night.

Holmen has beaten the Hilltoppers the last two years in dominating fashion, outscoring them 105-43. But if there is one thing I learned is don’t underestimate the Hilltoppers when they have a chip on their shoulder. And they will have another one on Friday night.

“Losing the last two years to Holmen — big both times — really gets us fired up,” Haggerty said. “We want to get that revenge on them.”

26: Number of points allowed by Onalaska in MVC play this season

61: Number of total yards allowed to Central QB Johnny Davis, who entered averaging near 350 per game.

2016: The Hilltoppers are looking for their first outright MVC title since 2016. They shared it with West Salem in 2017. 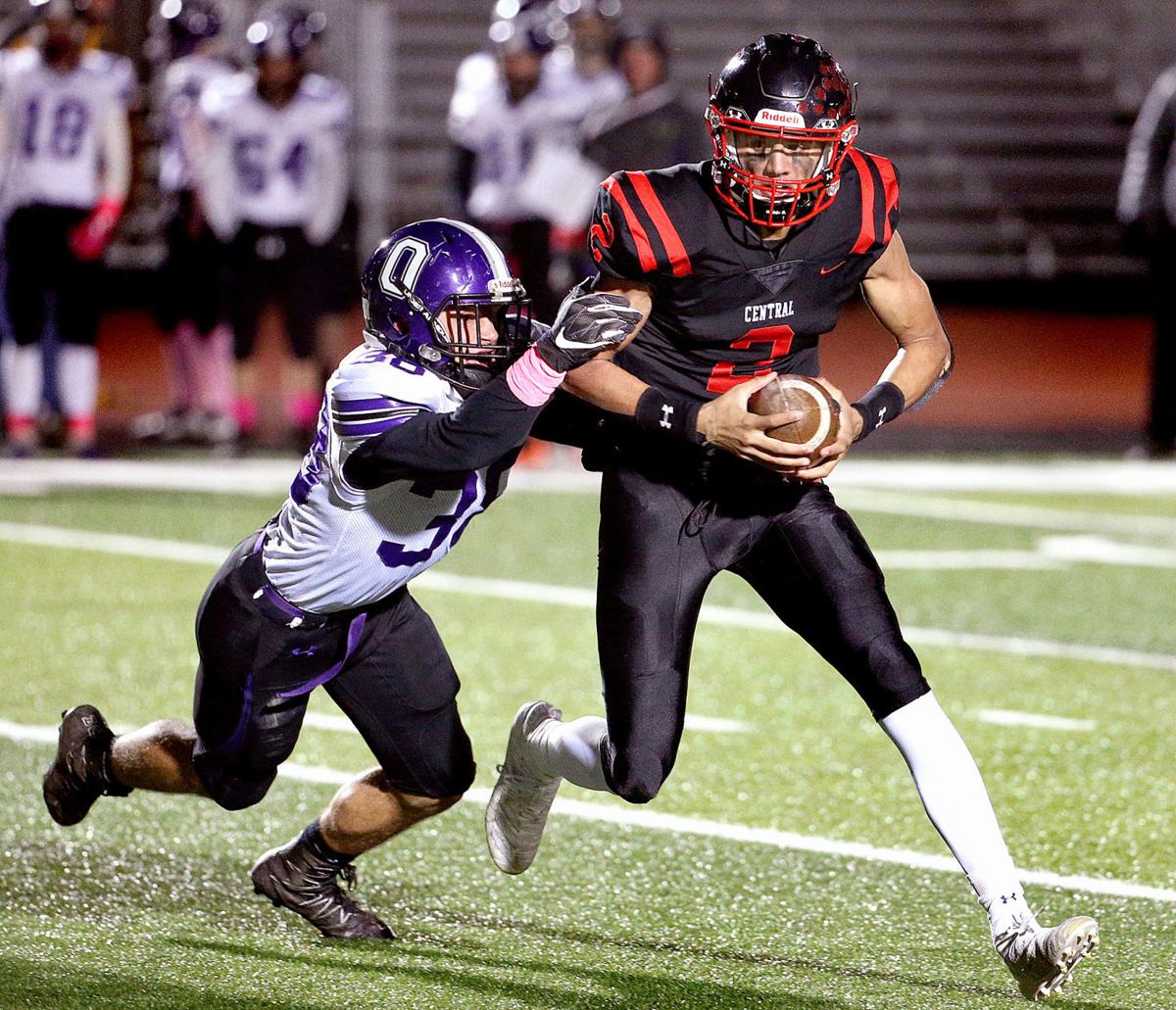