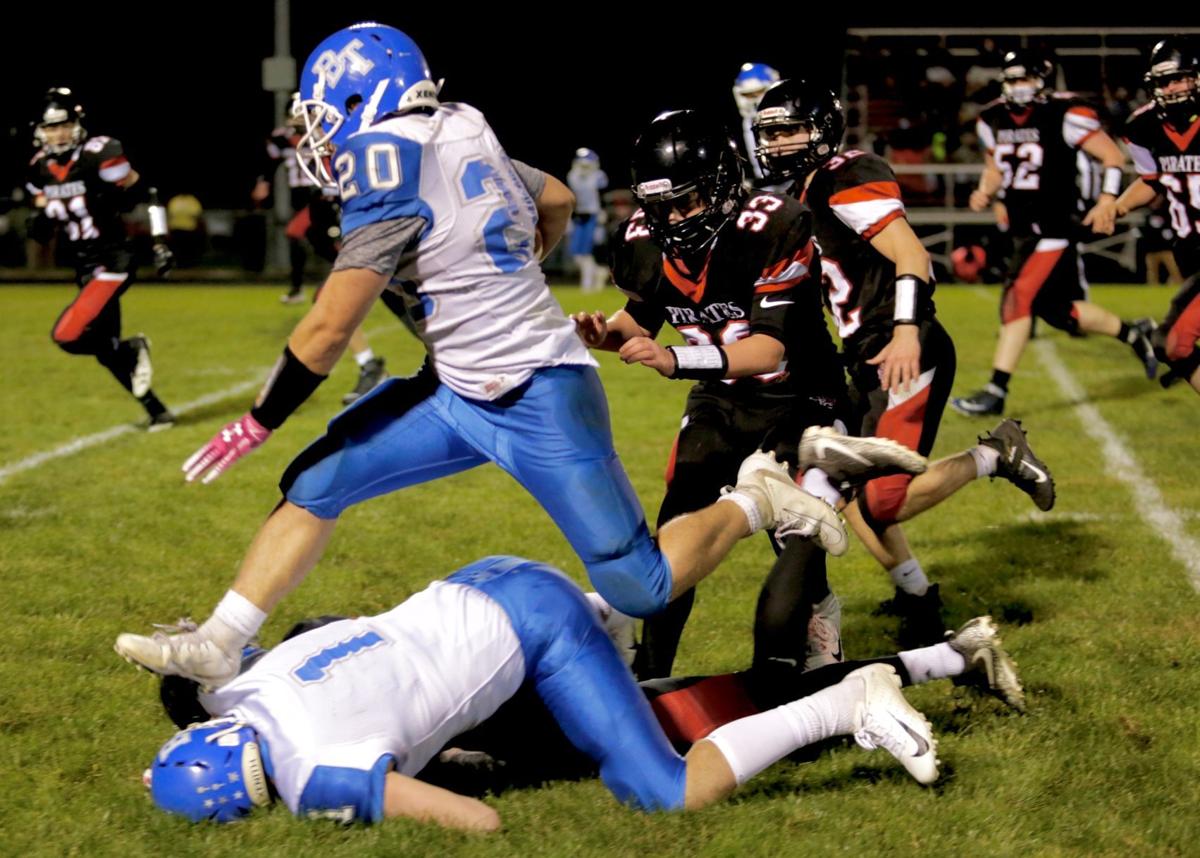 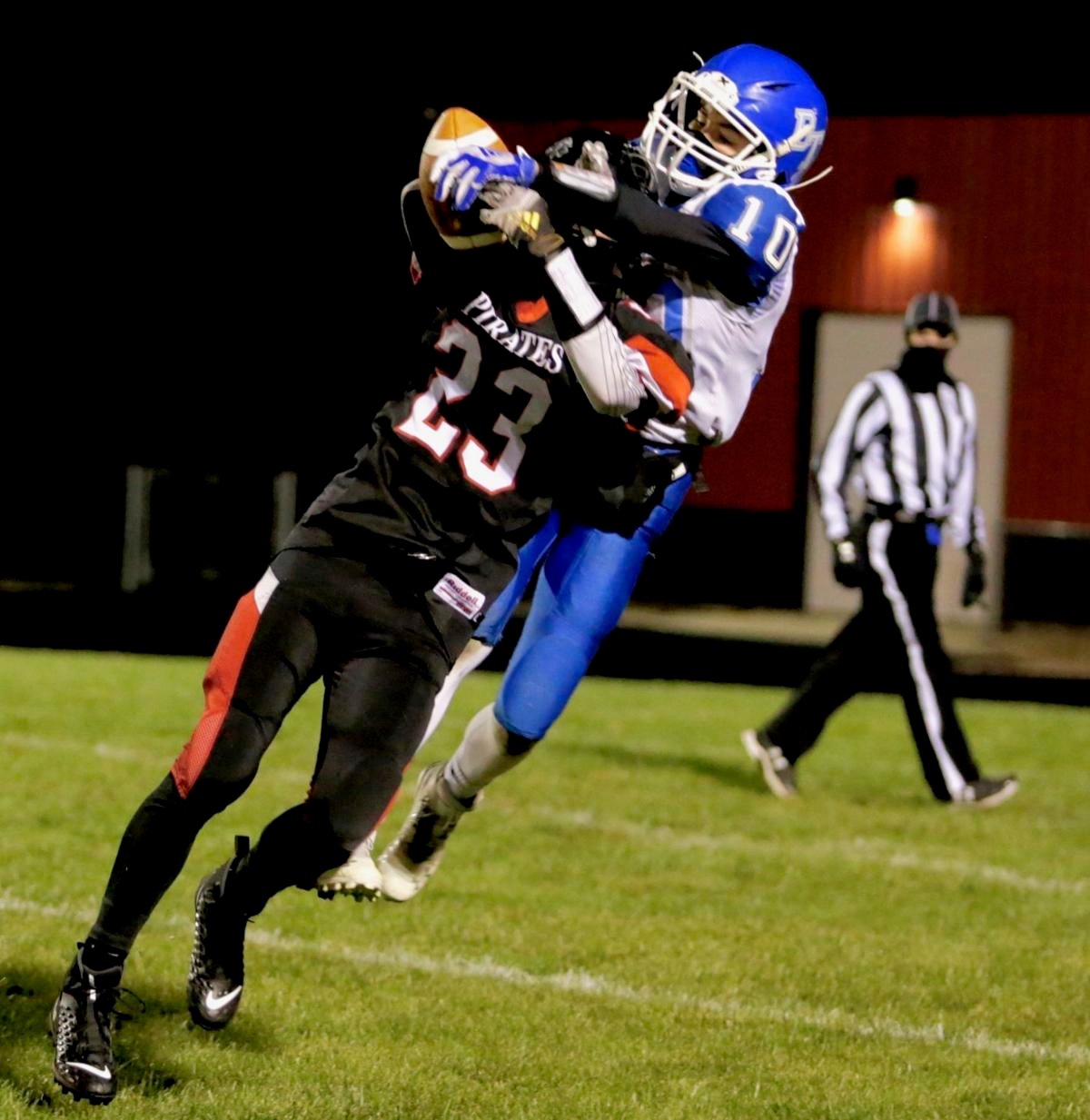 Blair Taylor's Colton Lejcher (10) plays excellent defense as he knocks this pass out of the hands of Matthew Bjorge (23) during Friday night football action in Fountain City on October 23, 2020. 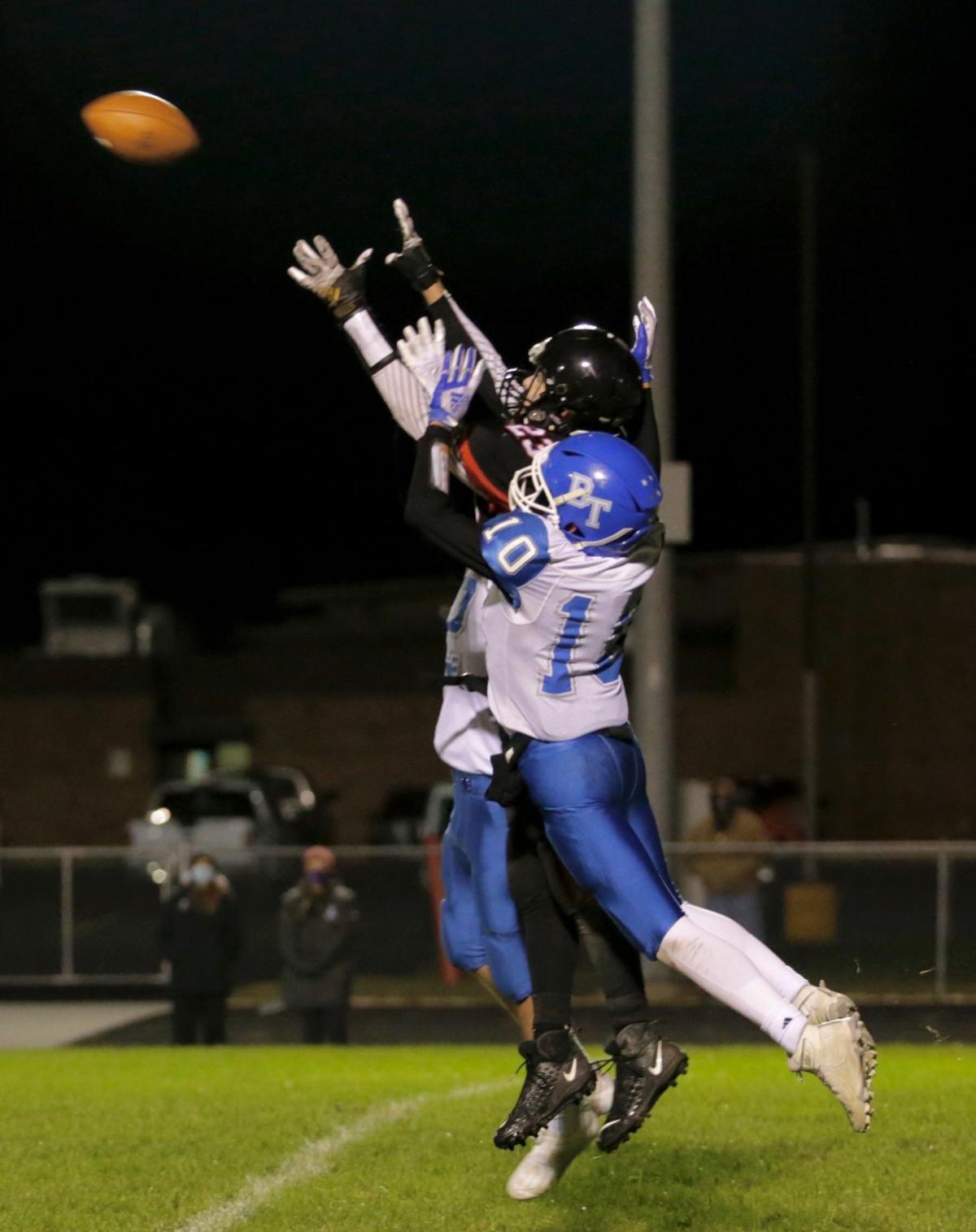 Cochrane-Fountain City's Matthew Bjorge (23) and Blair-Taylor's Colton Lejcher (10) leap high in the air for a pass during Friday night football action in Fountain City on October 23, 2020. 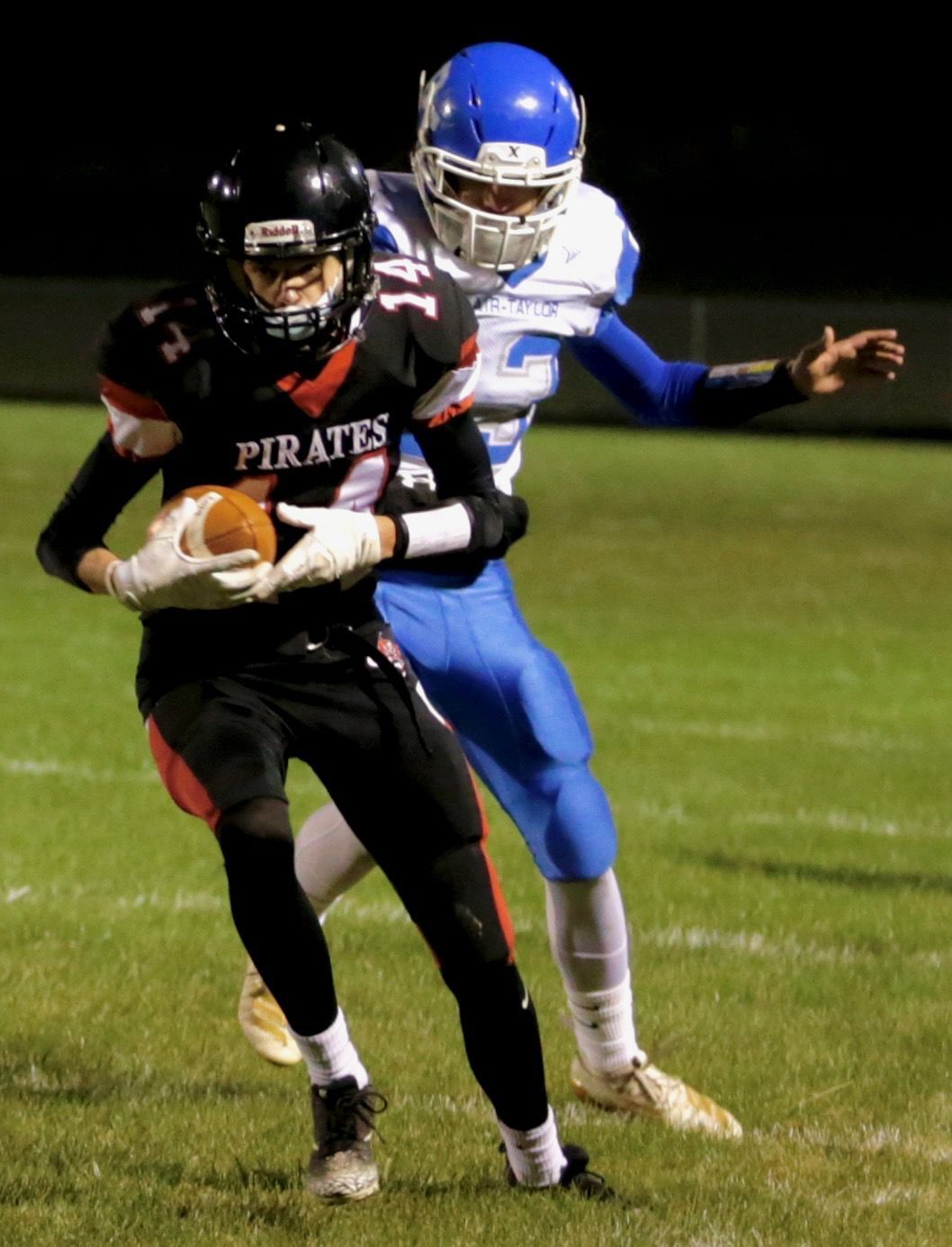 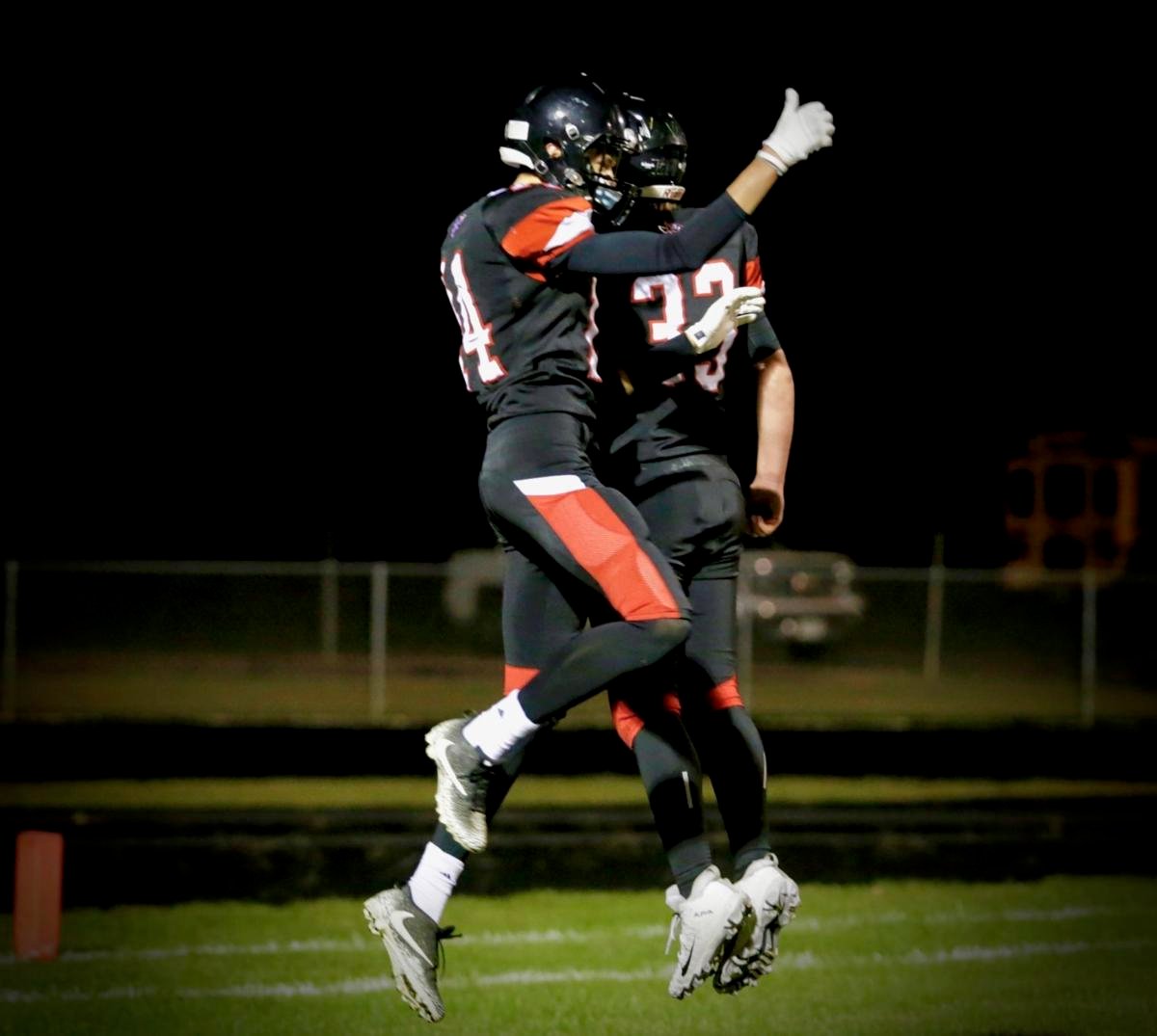 FOUNTAIN CITY, Wis. — The offense for the Cochrane-Fountain City High School football team tried plenty of different ways to get the offense rolling in its home opener on Friday night, but the defensive front for Blair-Taylor wasn’t having any of it.

The Wildcats snuffed out the Pirates rushing attack from the first drive of the game on, and came away with a 24-14 road win at C-FC on Friday night.

Blair-Taylor (4-0) held the Pirates (0-2) to exactly zero rushing yards on 24 attempts, stuffing senior halfback Zach Foley for minus-5 yards on 12 attempts, a week after Foley rolled for 101 yards on 13 attempts against Augusta.

“I was proud of our kids and the way we played team defense,” said Blair-Taylor coach Andy Nehring, singling out linemen such as Chris Rogstad, Tyler Thompson and Blake McNulty that stood out on defense. “We didn’t do a lot of stunts and a lot of things that were unique, we just lined up and played basic man-to-man football.”

After an initial turnover on downs, the Wildcats offense took the lead on a 1-yard plunge by senior Matthew Brandenburg, set up by a 22-yard toss play to the left side that ended just shy of the goal line. C-FC junior Wyatt Seibel answered with a 52-yard catch-and-run touchdown pass from junior Austin Becker with 3:08 remaining in the first quarter, but Blair-Taylor kept the Pirates from scoring again until just 28 seconds remained in the game.

“We know that C-FC is a good football program, and we were very impressed with them on film last week, so we knew we had our work cut out for us,” Nehring said. “I was impressed with the way that our kids rose to the occasion and made plays, and didn’t make any excuses when something went wrong.”

While the Pirates did struggle to run the ball, Becker was able to find a handful of chunk plays while passing, finishing 12 of 29 for 170 yards, and added a two-yard touchdown run late in the game.

C-FC coach Jesse Cyrus knew that the Wildcats were going to be aggressive defensively, but said he was pleased to see the offense get some confidence as the game progressed.

“They’re shooting gaps, they’re shooting holes, and we struggled to pick that up,” Cyrus said. “The good thing is we made some plays. Making plays is what we need to do, and seeing ourselves do it, so we’re comfortable doing it all the time.”

Cyrus was happy that the Pirates were finally able to turn on the lights and host a game, on what should have been C-FC’s seventh week of the regular season.

“It’s awesome. Thank goodness,” Cyrus said of getting the chance to play. “Basically we’ve had two weeks of practicing as a full group. It’s good to get out here, and we’re trying to learn it on the fly as fast as possible.”

Blair-Taylor will look to continue its unbeaten record as it hosts Eleva-Strum (1-3) next Friday.

“We’ve got to pay attention to the details,” Nehring said of how the Wildcats can keep things rolling. “Every down, mentally, executing what we need to do, and just cleaning up those little things.”

Brandenburg finished with 125 yards on 21 carries to lead Blair-Taylor. Junior quarterback Cain Fremstad finished 11 of 17 for 103 yards and two touchdown passes, while adding 49 yards rushing and a 15-yard scoring run in the third quarter.

BARABOO, Wis. -- The Tomah High School football team's offense was on the field for three first-quarter plays on Friday.

Blair Taylor's Colton Lejcher (10) plays excellent defense as he knocks this pass out of the hands of Matthew Bjorge (23) during Friday night football action in Fountain City on October 23, 2020.

Cochrane-Fountain City's Matthew Bjorge (23) and Blair-Taylor's Colton Lejcher (10) leap high in the air for a pass during Friday night football action in Fountain City on October 23, 2020.