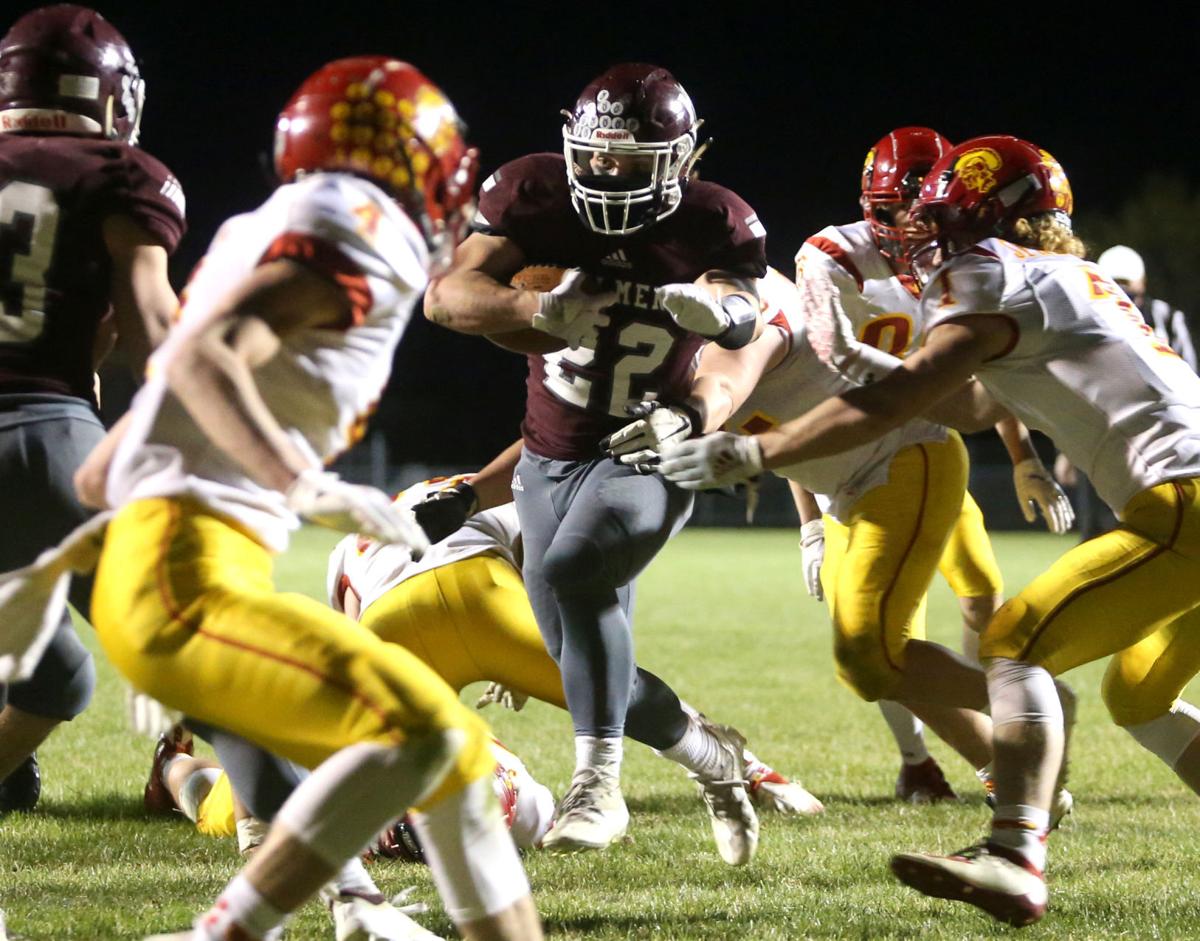 Holmen's Nathan Nevala finds a hole to the end zone at the end of the Vikings' final scoring drive against Sparta Friday night. Holmen won 41-21 to improve to 2-2 with one game left against Eau Claire North this season. 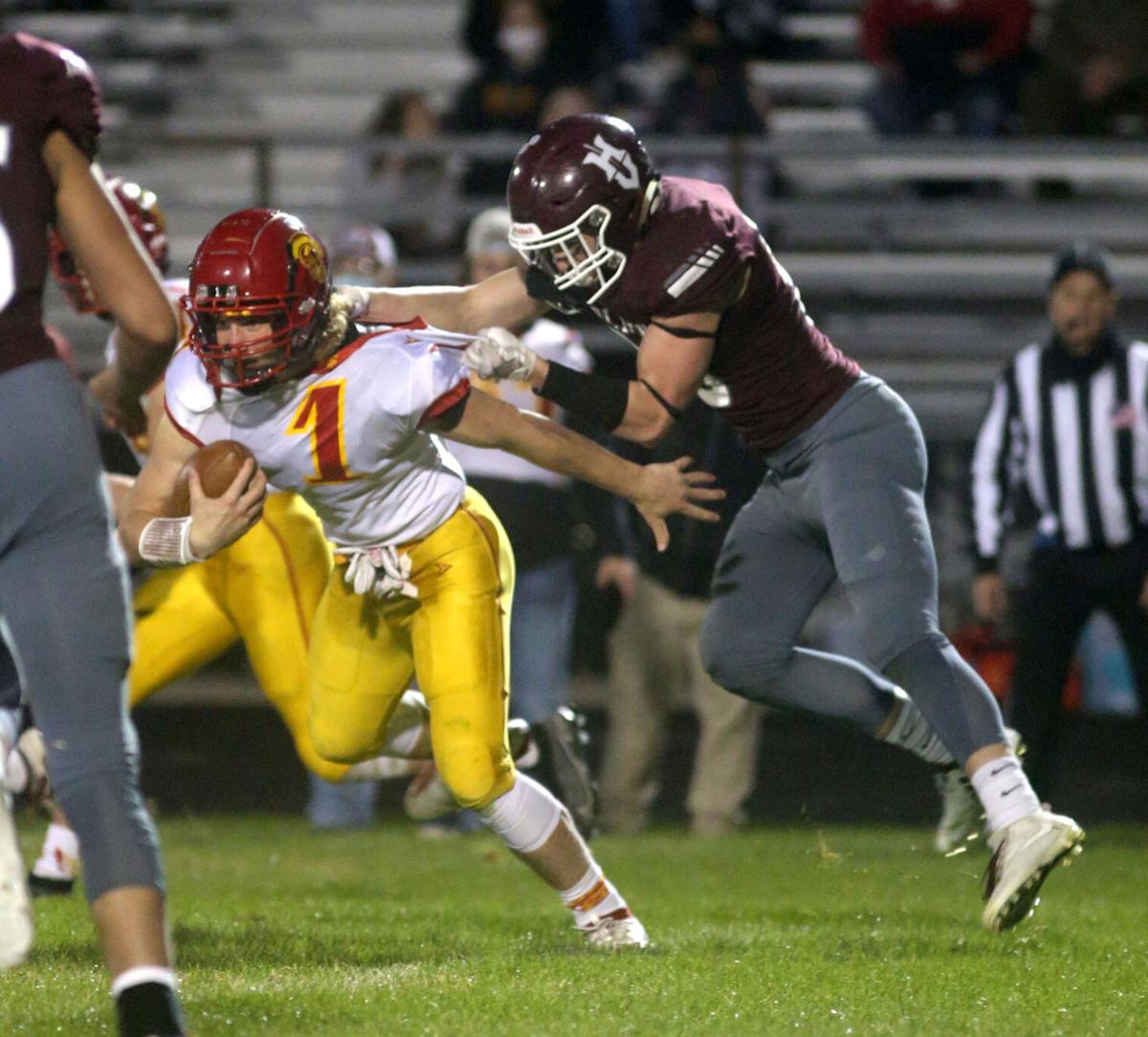 Sparta's Brett Stuessel is caught from behind by Holmen's Elliot Ness behind the line of scrimmage in the third quarter of Friday's game at Empire Stadium. The Vikings won 41-21.

The Holmen High School senior was as ready as anyone around to celebrate a 41-21 football victory over Sparta, and a crowd of people waited for him to exit Empire Stadium to do that.

But Barnett is also a bit of a perfectionist, which is tough to be in football.

The Vikings scored every time they had the ball in the first half and held a cast of standout performers to 45 yards on 19 offensive plays.

That's what made his reaction to Carson Kelsey's 23-yard touchdown run around the left side of the line in the fourth quarter to cut Sparta's deficit from 27 points to 20 with 5 minutes left stand out.

"We work too hard," Barnett said as he walked off the field, "to give up a cheap touchdown like that."

The lead didn't matter. The failure to execute did. And while Barnett was thrilled that Holmen had ended a two-game losing streak and given itself the chance to end this alternate season next week with a two-game winning streak, the play still bugged him.

"Hey, guys," Barnett said as he approached a small group of teammates on the sideline after the touchdown, "my bad."

He pushed his way through the back row, plopped down on one knee and got a good look at the monitor for analysis. Barnett pointed at the screen for emphasis to break down what went wrong and how he took a bad angle on the tackle. The play was watched by the defenders over and over until the group broke and turned back to the game.

"He is a leader and leads by example, and that's why he can say that he took the bad angle on that play," Holmen coach Travis Kowalski said. "That stuff happens. There are no perfect players in the world, but he's going to always be there to rally everyone if something bad like that does happen."

It was one of the few bad things that happened to the Vikings in what was anticipated by many to be a close game.

Junior Breken Turner rushed for 106 yards, senior Nathan Nevala for 101, and each of them scored one touchdown. Barnett rushed for two scores and picked up 45 yards on nine carries as Holmen beat Sparta for the first time since 2017.

The Vikings gained all 395 of their yards on the ground, and put the defensive clamps on the Spartans until late in the game. Junior Nick Kent, who was two weeks removed from a 219-yard rushing performance against Logan, was held to 22 yards on 11 attempts, and the dangerous Corbin Hauser was dropped for minus-18 yards on three attempts.

"They have a bunch of guys who can hurt you," Barnett said of the Sparta offense. "But at the end of the day, I will take our 11. If we play together, we will win, like we saw out there tonight."

The game began with a flurry of scoring and three significant returns on special teams. Holmen used a couple of nice punt returns to give itself first downs at the Sparta 19 and Sparta 16 on its first two possessions.

The Spartans, in between those plays, received a 90-yard kickoff return from Hauser to keep the game close.

Holmen quarterback Luke LeClaire scored from the 17 on Holmen's first drive for a 7-0 lead, and Turner reached the end zone from the 13 to answer Hauser's return and give the Vikings a 14-7 advantage.

Aside from the return, Sparta couldn't get much going. The Spartans had 16 yards in the first quarter and didn't get their second first down of the game until less than 4 minutes remained in the half.

The Vikings opted to kick field goals on two possessions, and Spencer Malone made good on those kicks from 21 and 36 yards.

The 36-yarder ended the half and pushed Holmen's lead to 27-7. The Vikings began that drive at their own 20-yard line with 2 minutes, 20 seconds on the clock. A couple of big runs moved the ball quickly enough for Kowalski to start thinking about a field goal.

Barnett turned a fourth-and-2 carry into a first down, then broke off a 26-yard run that moved the ball to the Sparta 19 with 2.1 seconds left. LeClaire spiked the ball in time to give Malone an attempt that sailed through the uprights.

"You don't think about points when you see an option team get the ball there with that kind of time left," Kowalski said with a smile. "We just wanted to see if we could get the chance to score.

BANGOR — Bangor High School football coach Rick Muellenberg couldn’t have asked his team for a better finish to a season.

The Cardinals pieced together a 14-play, 75-yard scoring drive in the final minutes and left only 18 seconds on the clock.

ELROY, Wis. — Any game of football truly can become a war of attrition.

Evenson was only on the field for one play, but it set the tone for the Vikings' 42-0 victory to close the alternate season.

There was a long list of things that the Logan High School football team was going to have to do to beat Central on Friday.

Holmen's Nathan Nevala finds a hole to the end zone at the end of the Vikings' final scoring drive against Sparta Friday night. Holmen won 41-21 to improve to 2-2 with one game left against Eau Claire North this season.

Sparta's Brett Stuessel is caught from behind by Holmen's Elliot Ness behind the line of scrimmage in the third quarter of Friday's game at Empire Stadium. The Vikings won 41-21.