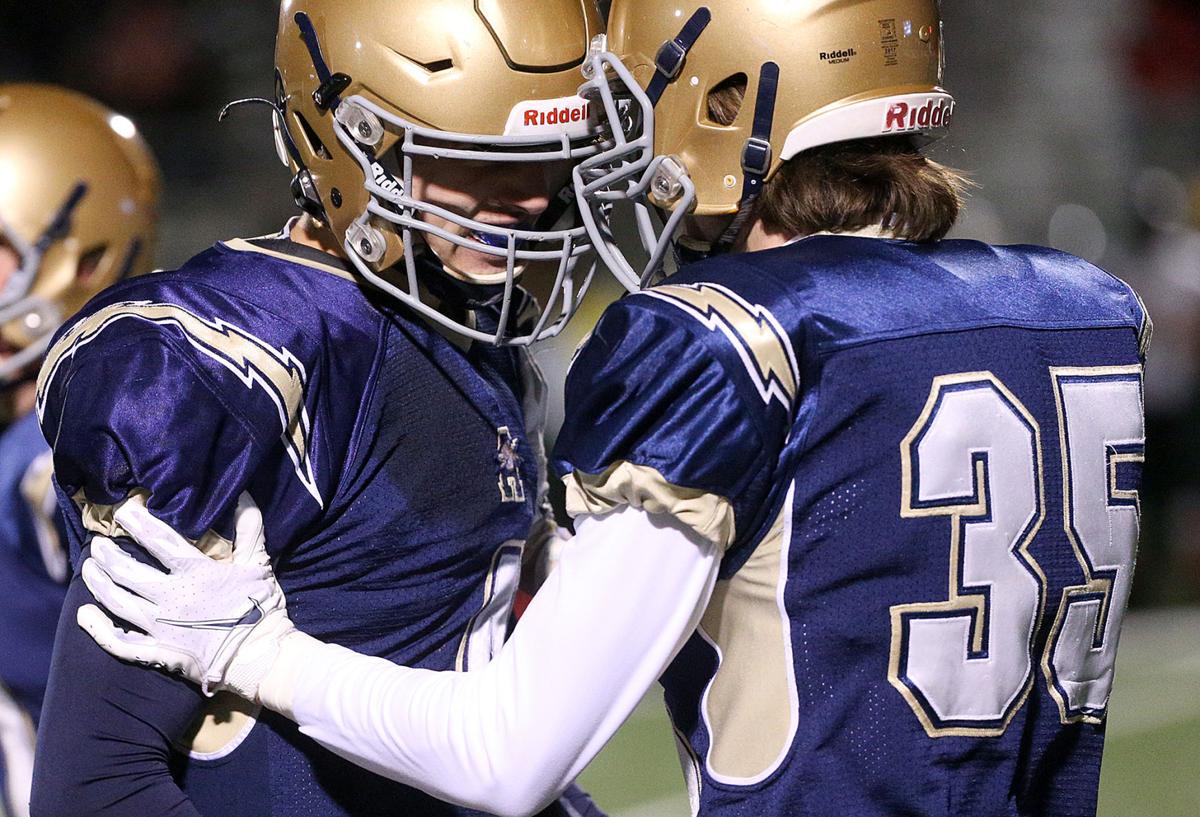 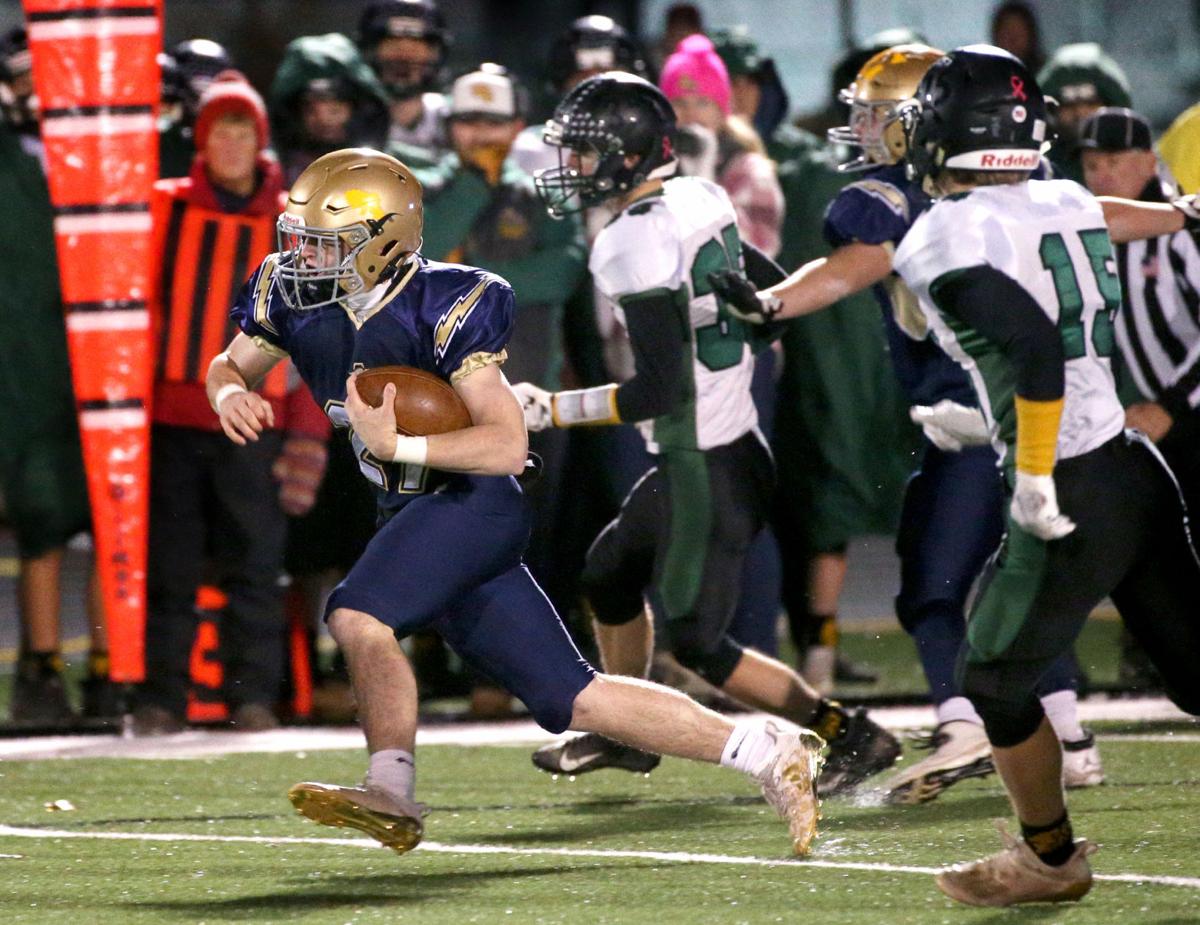 Aquinas' Calvin Hargrove makes a cut while running against Wittenberg-Birnamwood in Wisconsin Rapids on Friday. The Blugolds won 28-18 behind two Hargrove touchdowns and will play in Thursday's WIAA Division 5 championship game Thursday at Camp Randall Stadium.

WISCONSIN RAPIDS, Wis. — Both plays were meant to be passes, but Jackson Flottmeyer opted to use his legs.

On the first, the Aquinas High School junior quarterback paused in the pocket before finding a crease on the left side and racing around a diving Wittenberg-Birnamwood defender for a 7-yard touchdown.

And on the second, he rolled out to his right, shook a tackle at the 10-yard line, cut upfield at the 6 and lunged into the end zone for another score while absorbing a hit.

For the first time all season, Flottmeyer didn’t throw a touchdown pass. But his pair of touchdown runs helped the Blugolds shake off a scoreless first half and ignite a 28-18 win over the Chargers in a WIAA Division 5 state semifinal on Friday night.

“We had designed plays for Quinn (Miskowski) and Jack Christenson, and, I mean, Wittenberg did a really good job of covering those guys,” Flottmeyer said. “I had to go with my instinct, and I had to make a play. I mean, if that’s what I have to do to win, I’ll do anything.”

“They still count as six points, right?” Aquinas coach Tom Lee joked after the game. “They don’t change when you throw them compared to running them, do they?”

With the victory, the Blugolds (13-0) will play in the state title game for the first time since 2007 — the same year the program won its lone WIAA state championship. They’ll play Mayville (11-2), which beat Belleville 42-25 on Friday, at 4 p.m. Thursday at Camp Randall Stadium in Madison.

“I can’t even describe how it feels,” junior running back and linebacker Calvin Hargrove said. “It’s insane. It’s insane.”

Aquinas, though, trailed 6-0 at the half — a deficit that could have been greater if not for a pair of goal-line stands.

On Wittenberg-Birnamwood’s (10-4) first possession of the game, senior Michael Lium intercepted Ben Wesolowski on fourth-and-4 from the Blugolds’ 7. And on the Chargers’ next possession, Hargrove recovered a fumble in the end zone after Wesolowski lost the ball on a second-and-goal play from the 3.

“I’m guessing that they’re walking off this field going, ‘Oh man, we fumbled at the 1,’” Lee said. “... Like, I’m sure they’re kicking themselves.”

But Aquinas also missed an opportunity to score after Wittenberg-Birnamwood took a 6-0 lead late in the first half. Flottmeyer completed passes to Collin Conzemius, Chris Wilson and Miskowski, but his final attempt of the half fell incomplete in the end zone.

The Blugolds’ offense, though, carried that momentum into the second half.

After the defense came up with a fourth-down stop on the opening possession of the third quarter, Flottmeyer connected with Miskowski for a 28-yard gain. And four plays later, the quarterback scrambled for his touchdown that gave Aquinas an 8-6 lead with 7 minutes, 48 seconds left in the third quarter.

The Chargers responded quickly with a 76-yard touchdown pass from Wesolowski to Jack Fraaza, but Flottmeyer orchestrated another Blugolds scoring drive.

He completed a 23-yard pass to Hargrove and a 43-yard pass to Wilson before his second scoring scramble put Aquinas in front 16-12 with 4:32 left in the third quarter.

“That just changed the momentum,” senior running back and linebacker Joe Penchi said. “It was fantastic.”

In addition to his two touchdown runs, Flottmeyer completed 12 of his 18 passes for 233 yards.

The offense continued to roll as the Blugolds turned to sophomore David Malin, Hargrove and Penchi on the ground. Those three wore down Wittenberg-Birnamwood, and Hargrove found the end zone twice in the fourth quarter to extend the Blugolds’ lead to 28-12 before the Chargers added a late score.

Hargrove finished with 12 carries for 69 yards to go with three catches for 77 yards. Penchi added 59 yards on five carries, while Malin had 44 yards on 12 carries.

“You saw at one point where a (Wittenberg-Birnamwood) kid just kept sitting there,” Lee said. “Those aren’t soft kids, man. Those are warriors that were getting up after it.

The defense, meanwhile, allowed just 105 yards after Flottmeyer gave Aquinas the lead for good — 71 of which came on Wittenberg-Birnamwood’s final touchdown drive. The Blugolds struggled to corral an elusive Wesolowski for much of the night, but a Damien Lee sack on fourth down ended a drive late in the third quarter and helped set up Hargrove’s second touchdown.

“Man, oh man, that really got us going,” Flottmeyer said of Lee’s sack. “I think a lot of credit has to go to him, Jack Christenson, Pierson Feehan, all these other guys that stepped up and made plays.”

The end result was a historic win, but Aquinas is still hungry for more.

These rare photos show Tom Brady from his baseball days

Aquinas' Calvin Hargrove makes a cut while running against Wittenberg-Birnamwood in Wisconsin Rapids on Friday. The Blugolds won 28-18 behind two Hargrove touchdowns and will play in Thursday's WIAA Division 5 championship game Thursday at Camp Randall Stadium.