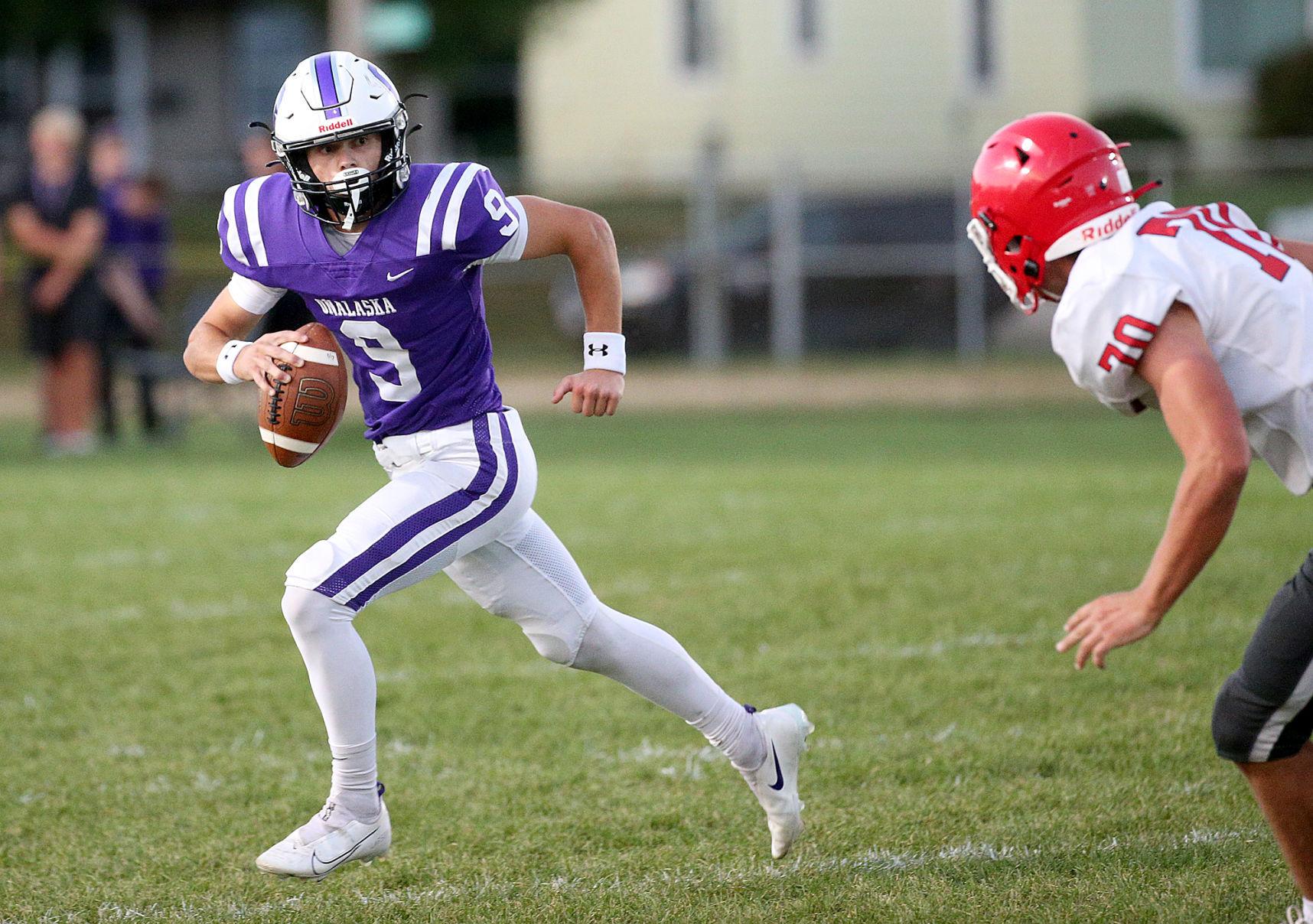 Onalaska's Ayden Larson evades the rush during a game against Logan earlier this season. The senior quarterback leads the Hilltoppers into their WIAA Division 3 playoff game at Rice Lake on Friday. 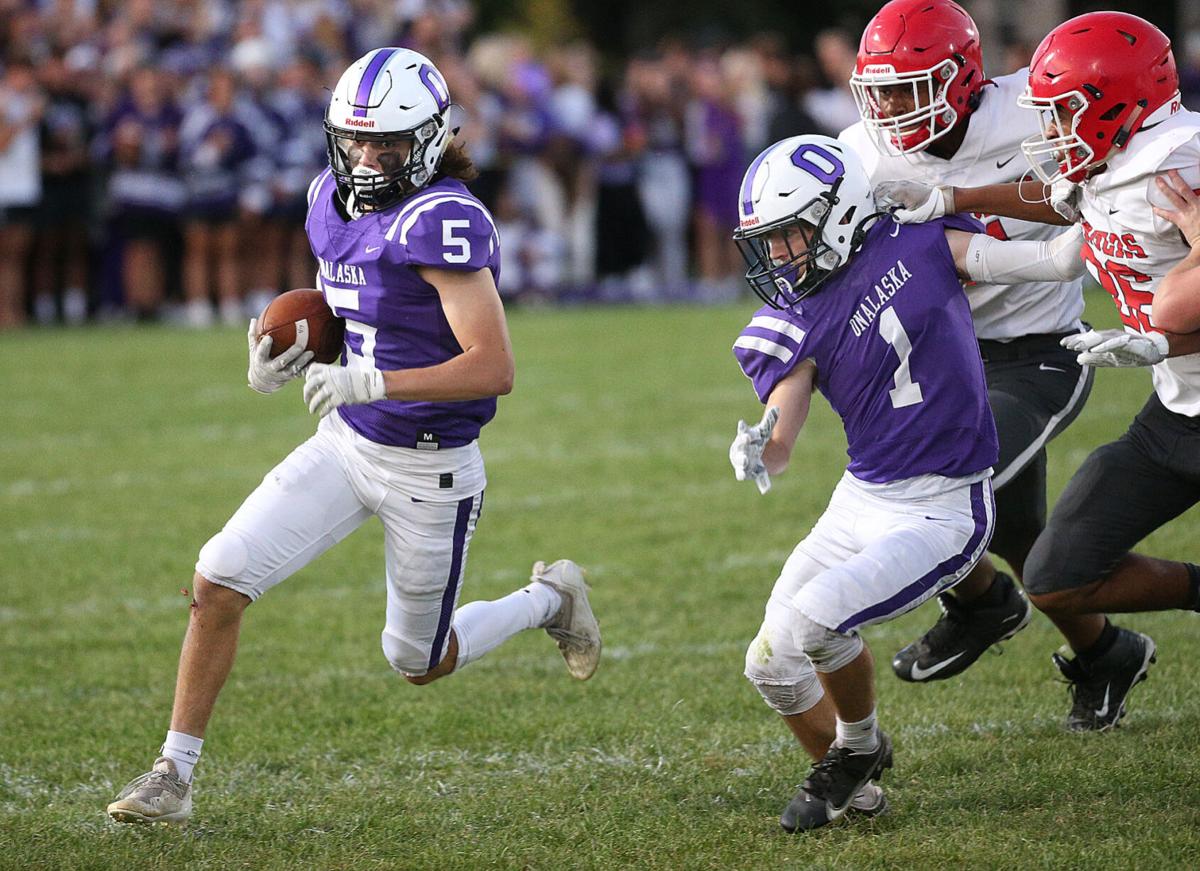 Onalaska's Matty Burnette finds an opening to run during the Hilltoppers' win over Logan this season.

At this point in the season, the Onalaska High School football team is no stranger to close games — even though the Hilltoppers have frequently been on the wrong end of tough finishes.

A heartbreaking, last-second, 28-21 loss to Baraboo in Week 1, despite holding a seven-point lead with a minute to play. A 36-33 loss to Central two weeks later, despite leading early in the third quarter. And a 32-28 loss to West Salem two weeks after that, despite taking the lead with just over two minutes left.

But each has provided learning moments and set Onalaska up to handle adversity when it matters most.

Such was the case last week in the opening round of the WIAA Division 3 playoffs.

After a special teams miscue, the seventh-seeded Hilltoppers scored 14 unanswered points and made key defensive plays to earn a 28-21 win at second-seeded Mount Horeb/Barneveld — extending their season and giving them a second-round game at third-seeded Rice Lake this Friday.

“Adversity is not experience until you make it pay off, right? I mean, until then it’s just unlucky bounces,” Onalaska coach Tom Yashinsky said. “But when you can learn from it and when you can come out on the other end of it, that’s because you’ve had some of those experiences and you’ve used them in a positive way.

“So a lot of learning has happened this year in those tough games to allow us to come ahead. … The kids, they’re battle-tested.”

Indeed, the Hilltoppers are.

Allowing 14 points to Baraboo — a team also still alive in the Division 3 playoffs — in the final minute could have hung over the entire season.

After senior quarterback Ayden Larson’s go-ahead touchdown run against West Salem was wiped away by Panthers quarterback Brett McConkey, Onalaska needed to win two of its final three games just to make the postseason. It did so by shutting out Sparta 28-0 and pounding Tomah 51-13.

Even against Mount Horeb/Barneveld, the Hilltoppers needed to respond well to a blunder.

Onalaska failed to field the opening kickoff of the second half, which gave the Vikings the ball near the Hilltoppers’ 30-yard line. Mount Horeb/Barneveld then quickly took a 21-14 lead, but Onalaska responded.

Larson followed with a pair of touchdowns — first with his legs, then with his arm — and the defense had three interceptions in the final five minutes to secure the win.

“It can get discouraging when you’ve had as many close losses and near finishes as we’ve had, and you can start to think that’s kind of your destiny,” Yashinsky said. “But it just shows the kids that you keep playing.

“We’ve always talked about ‘pound the rock,’ right? And take another swing. And you don’t know what swing it’s going to be that breaks the rock, but when it breaks it’s because of all the swings that happened before you.”

The Warriors scored all of their points in the first half in last week’s 48-14 victory over sixth-seeded Medford and have won three straight since a loss at Menomonie, a No. 2 seed in Division 2.

Although Fenske is certainly a threat on the ground, Yashinsky is more concerned about what the quarterback can do with his arm — particularly when he targets 6-foot-3 senior wide receiver Alex Belongia.

“We’ve obviously struggled in the air, so we have to find ways to limit them, to make a play, to force a bad throw, to get a sack — whatever it is — to win the game,” Yashinsky said. “That’s the key. Limiting (Belongia) is the key to winning the game.”

On the other side of the ball, the Hilltoppers will lean on Larson, who has completed 70% of his passes for 1,850 yards and 20 touchdowns against just two interceptions while also leading the team in carries (119), rushing yards (408) and rushing touchdowns (10).

“When we’ve gotten late in the season, it’s been his game,” Yashinsky said. “It was the same thing last year when we went and faced Baraboo. The game plan was, ‘Alright, put the ball in Ayden’s hands and let the kid win it.’”

West Salem, a No. 4 seed, has benefited from Luke Noel and CJ McConkey returning from injury and has won three straight since suffering its lone loss of the season, which came to River Falls.

Junior quarterback Brett McConkey has completed 82 of 141 of his passes for 1,107 yards and eight touchdowns against three interceptions. He’s also rushed for 600 yards and six touchdowns, while CJ McConkey has 535 rushing yards and 10 scores.

The Blugolds beat Spooner 30-6 last week and are led by junior quarterback Jackson Flottmeyer, who has completed 74% of his passes for 2,122 yards and 30 touchdowns against three picks.

The Orioles scored 21 unanswered points in the third quarter last week to come back and beat Arcadia 35-18.

Stanley-Boyd has battled injuries throughout the season and received a boost with the return of senior quarterback Carsen Hause, who has thrown for 1,533 yards and 19 touchdowns against three interceptions.

Bangor is coming off a 35-14 victory over Ithaca and will likely lean on senior running back Mathieu Oesterle, who has 210 carries for 1,239 yards and 18 touchdowns this season.

The Eagles dominated De Soto for a 46-0 win last week and are led by junior running back Colin O’Neil, who has 165 carries for 1,148 yards and 15 touchdowns this year.

For a look at every second-round matchup, please turn to B3.

Onalaska's Ayden Larson evades the rush during a game against Logan earlier this season. The senior quarterback leads the Hilltoppers into their WIAA Division 3 playoff game at Rice Lake on Friday.

Onalaska's Matty Burnette finds an opening to run during the Hilltoppers' win over Logan this season. 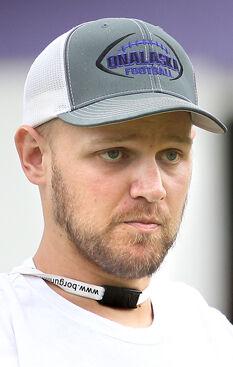