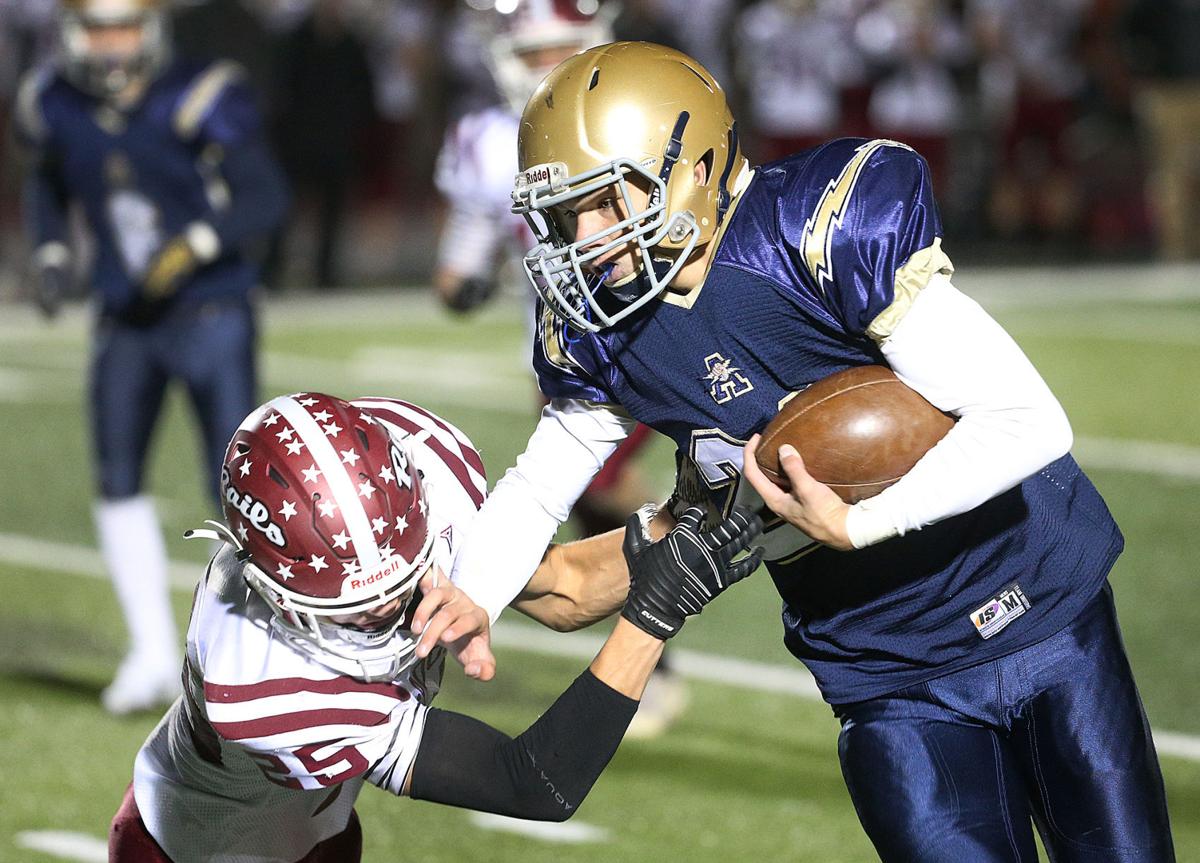 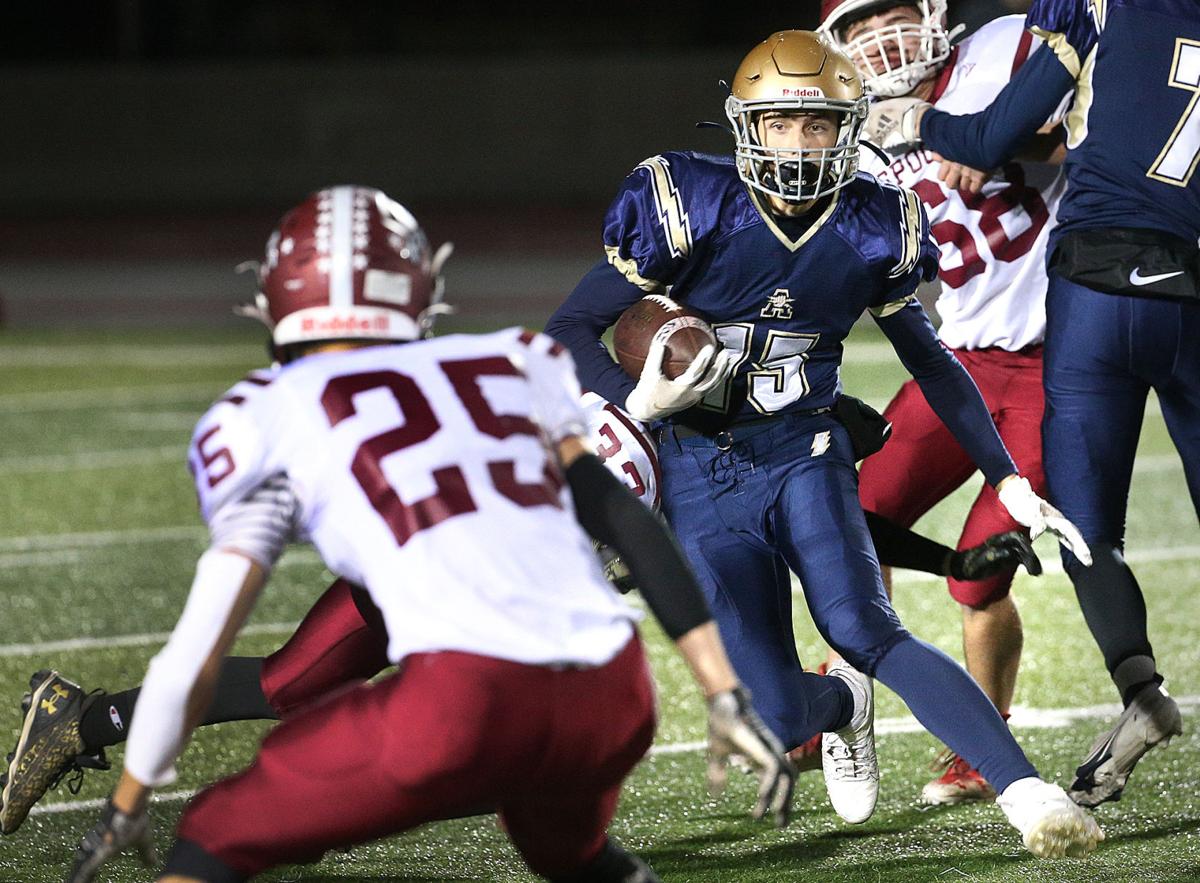 Aquinas' Quinn Miskowski runs after making a catch in a WIAA Division 5 first-round playoff game against Spooner at UW-La Crosse on Friday.

For the first time all season, the Aquinas High School football team was facing a deficit.

The Rails methodically moved the ball down the field, and senior running back Isaac Hopke gave his team a six-point lead with a 2-yard touchdown run midway through the first quarter.

Flottmeyer threw a pair of incomplete passes to start the ensuing drive, but he then found senior Jack Christenson, who pitched the ball to Malin for a 30-yard gain on the hook-and-ladder.

Three plays later, Flottmeyer hit senior Quinn Miskowski, who made a defender miss and extended across the goal line for a 25-yard score. After Malin punched in the two-point conversion, the Blugolds were back in a familiar spot — ahead.

And they know what to do from there.

Top-seeded Aquinas never trailed again as it leaned on its defense and turned to the ground game in the second half to pull away for a 30-6 victory over eighth-seeded Spooner at Roger Harring Stadium at the Veterans Memorial Field Sports Complex.

The Blugolds will face fifth-seeded Stanley-Boyd next week in the second round after the Orioles beat fourth-seeded Arcadia 35-18.

“To be honest, I got a little nervous after they punched one in on us,” Blugolds junior linebacker and running back Calvin Hargrove said. “I mean, that was the first time we’ve allowed points all year in the first quarter, and after that turnover … we responded really well. Offense scored two times in a row, defense stepped up.

“It was good to see us play with a little adversity there.”

Hargrove was a big part of Aquinas’ response on both sides of the ball, as was senior Joe Penchi. Hargrove finished with seven carries for 64 yards and a touchdown, while Penchi had six carries for 44 yards and a score.

And both menaced the Rails (5-5) from their spots at linebacker as the Blugolds (10-0) limited Spooner’s run-heavy offense to 3.3 yards per carry.

“I love to see it,” Flottmeyer said of the defensive performance. “I wish I could be out there with them, but I have a job to do on offense and they do their job on defense.”

Flottmeyer got his job done, too, particularly after Penchi and senior Pierson Feehan made key stops to give the ball back to Aquinas late in the first quarter.

The Blugolds started the drive on their own 5 but quickly got some breathing room on a 10-yard gain from Flottmeyer to junior wideout Collin Conzemius. The quarterback also connected with Christenson and Miskowski for first downs, and he scrambled for 7 yards to move Aquinas to the Rails’ 31.

Malin took over from there — first with a 6-yard gain, then getting around the left edge for a 25-yard touchdown that pushed the Blugolds’ lead to 16-6 with 10 minutes, 5 seconds left in the second quarter.

Flottmeyer, who finished 12-of-17 passing for 158 yards and a touchdown, got Aquinas into scoring position again late in the first half, but a Will Skemp fumble ended the drive.

“Left probably a couple of scores out on the field,” Blugolds coach Tom Lee said. “We should have punched one in right before the half. … I’m still frazzled right now.”

Spooner took that momentum into the second half and drove the ball all the way to the Aquinas 27 while eating up plenty of clock — and keeping the Blugolds’ explosive offense off the field. But Penchi made back-to-back tackles for loss, including a 10-yard sack on third down after he was untouched on a blitz.

“We’ve kind of been trying to run that pressure a lot,” Lee said. “He’s not necessarily the guy that’s supposed to get home on it, but he got home on it. So that’s all right.”

“I saw it wide open. I was like, ‘I’m going to get this sack.’ I was so happy,” Penchi added. “Got the crowd going, got the team going. It was amazing.”

The Rails’ reverse pass on fourth down fell incomplete, and Aquinas went 62 yards on seven plays — six of them runs — to extend its lead to 24-6 with 46 seconds left in the third after a Penchi 8-yard TD run.

The Blugolds tacked on another score midway through the fourth after a seven-play, 57-yard drive, all of which came on the ground.

Malin finished with eight carries for 63 yards and a touchdown, while Aquinas totaled 170 rushing yards on 26 carries. Flottmeyer had only one pass attempt in the second half.

“We haven’t done that all year. That was awesome,” Penchi said. “We showed them we’ve got the pass and the run. It was great. It was great.”

“Everybody can basically get 10 yards every time they touch the ball,” Hargrove added. “It’s crazy that we have three really good running backs and we’re a pass-heavy team. It’s so good to have.”

As Aquinas turns its attention to Stanley-Boyd, Flottmeyer believes getting tested by Spooner will serve the team well.

“I think that really helps us push into the playoffs,” Flottmeyer said. “I know we’re going to face a lot of adversity with these teams coming up.”

The Blugolds trailed for the first time all season but responded well to advance to the second round of the Division 5 playoffs.

Aquinas' Quinn Miskowski runs after making a catch in a WIAA Division 5 first-round playoff game against Spooner at UW-La Crosse on Friday.