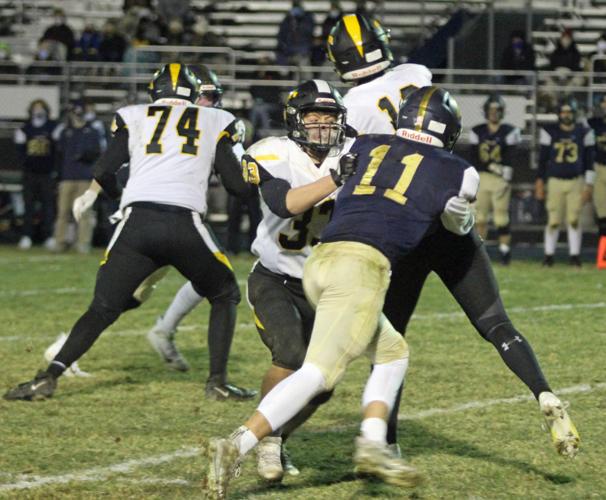 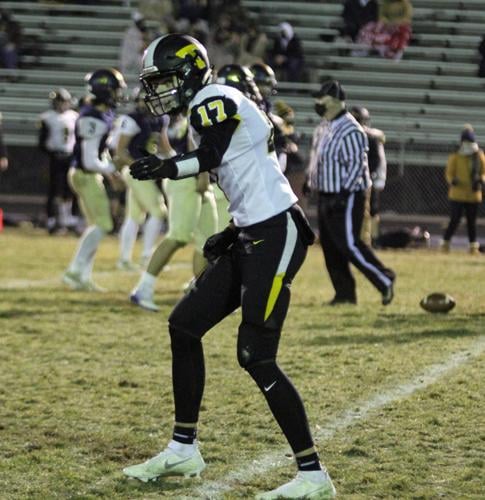 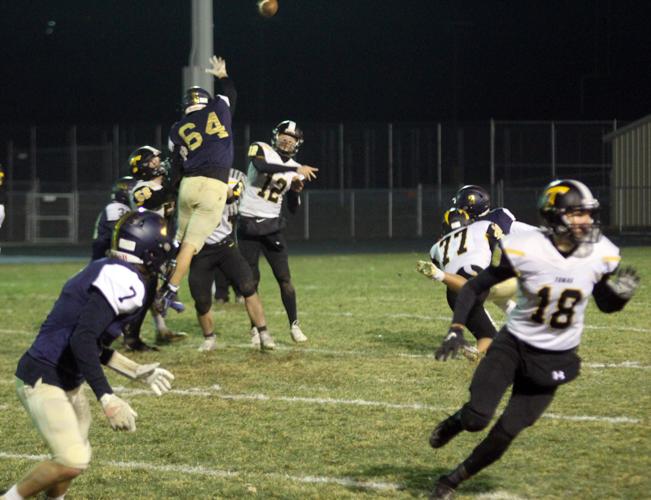 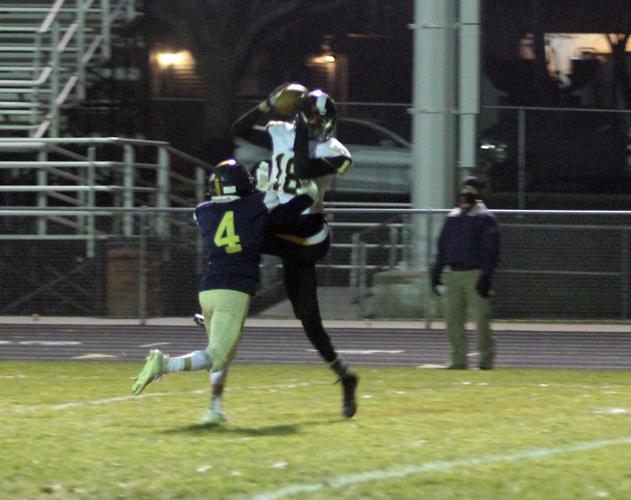 Tomah's Drew Brookman catches a touchdown pass with 1 second remaining in the first half of Friday's playoff loss in Baraboo.

BARABOO, Wis. -- The Tomah High School football team's offense was on the field for three first-quarter plays on Friday.

Those plays ended in an interception, a fumble and a 2-yard loss in a one-sided first quarter that set the tone for Baraboo's 43-6 win in a WIAA Division 2 playoff game at Flambeau Field in Baraboo, Wis.

"If you were going to write a start to the game, that's the way you would do it," Baraboo coach Steve Turkington said after the third postseason win in the program's history. "We're going to celebrate the first playoff win in 15 years around here."

The second-seeded Thunderbirds (7-1) wasted no time taking control of their first home playoff game since that 2005 win over Logan. They returned the opening kickoff to the 35-yard line, then went to work behind their dominant offensive line.

Senior running back Owen Nachtigal, who scored three first-half touchdowns, ran 18 yards to the left on the first play, then took it right for 21 yards on the second. The next play went to Luna Larson, and the junior quarterback took it up the middle for 12 yards.

It took just four running plays for Baraboo to march 65 yards, as Nachtigal took it in from 14 yards out and recovered his own fumble in the end zone to give the T-Birds a 6-0 lead 1 minute, 25 seconds into the game.

"They're a high-powered offense," Tomah coach Joe Protz said. "A very physical team with two big, nice runners out of the backfield. We knew it would be tough to stop them, but we thought we had a good game plan ... Give them credit.

"It's good to have this playoff game because that's where we want to be, as physical as Baraboo."

Tomah (4-3), which was seeded third and carried a three-game winning streak into Friday's game, started its first possession at the 24-yard line. Quarterback Justin Gerke looked right, but Baraboo junior Riley Weyh won a jump ball to intercept the pass and give Baraboo possession at the Tomah 47-yard line with 10:23 to go in the first quarter.

The T-Birds went right back to the ground game, as Larson ran for 37 yards on a quick drive that ended with a 5-yard Nachtigal touchdown run. Larson connected with Justin Philipp for a two-point conversion that gave Baraboo a 14-0 advantage.

Tomah's second offensive play of the night worked. Senior running back Brandon Lueck broke loose down the left sideline for more than 50 yards before Baraboo's Clayton Teasdale caught him and punched the ball out near the goal line. The T-Birds recovered the fumble at the 2-yard line with 9:02 to play in the first.

"Clayton Teasdale's strip on that tackle was huge — the play of the game I think," Turkington said of the senior defensive back. "He came all the way across the field and knocked the ball out. ... To have two offensive plays and two turnovers, it was like, 'Wow, we're rolling.'"

They didn't stop. Larson broke off a 72-yard run that was called back by a block in the back. But the T-Birds weren't fazed. Larson found Philipp for a 10-yard pass that crossed midfield, then connected with Michael McCabe for 12 yards down to the 34. The Timberwolves stiffened, however, as Bryson Retzlaff intercepted a fourth-down pass to give Tomah possession at its own 24 with 1:17 to play in the quarter.

Tomah's third and final offensive play of the opening quarter was a handoff to Lueck. Larson, a Division I recruit at linebacker, gave him no room to breathe, immediately hitting Lueck for a 2-yard loss to cap off Baraboo's dominant quarter.

"When we're in the playoffs and we play a good team like Baraboo, we've got to fire on all cylinders, we can't make those mistakes," Protz said of his team's tough start.

The T-Birds kept coming in the second quarter, as Brady Henry intercepted a pass to get the Baraboo offense back in business. Nachtigal capped off a methodical drive with a 20-yard touchdown run, then Larson ran in the two-point conversion as Baraboo took a 22-0 lead.

The Timberwolves moved the ball on their next possession, completing a 17-yard pass on a fake punt that took them into the red zone. But the Baraboo defense stiffened, with Weyh breaking up a fourth-down pass in the end zone as Tomah turned it over on downs with 1:02 to go in the half.

That was plenty of time for the T-Birds, who were the beneficiaries of a roughing the passer before Larson found Nachtigal for a 54-yard screen pass down to the 14-yard line. They went back to the air and Larson completed a 14-yard touchdown with 0:27 to play. Henry tacked on the extra point as Baraboo opened up a 29-0 advantage.

Tomah came to life after getting good field position thanks to a Baraboo penalty. Gerke connected with Kade Gnewikow for a 17-yard completion, then looked toward Drew Brookman. The sophomore receiver jumped, came down with the ball and fell into the end zone with 1 second on the clock. The Timberwolves faked the extra point, but the pass fell incomplete and Baraboo took a 29-6 lead into halftime.

"We had a couple nice drives and that score right before half," Protz said. "If we had come out better right away maybe it could have been different, but hats off to Baraboo, they're a tough, physical team."

The Baraboo defense, which has four shutouts this year and entered the night allowing just 7.0 points per game, kept playing throughout a second half that saw a running clock down the stretch. The offense scored at least 35 points for the fourth straight game. Larson ended Baraboo's first drive of the second half with a 59-yard run, then threw a 20-yard touchdown pass to Michael McCabe with 7:28 remaining in the game. Henry made both extra points to provide the final score of 43-6 in Baraboo's second playoff game in 14 years, and first since suffering a 27-0 loss to Waunakee in 2018.

Baraboo will visit No. 1 Onalaska next week in what will be a regional championship in the WIAA's four-team bracket playoff format necessitated by the pandemic. Onalaska (4-2) eased to a 63-22 win over No. 4 Portage (3-3) on Friday.

Turkington is somewhat familiar with the Hilltoppers, as Baraboo was scheduled to open the season against Onalaska before the COVID-19 pandemic altered everyone's schedule.

"They're a pretty dynamic offense, pass and run. They're pretty balanced, but they're a spread team," Turkington said of the Hilltoppers. "They're going to be good. They're well-coached and they've got good athletes. It'll be a good test for us. And it's a regional championship, so that's the way it should be."

The T-Birds, who are outscoring opponents 258-55 this year, are excited to get one more week together after winning on a night when more than 30 playoff games were canceled statewide.

"In the pregame and postgame, I said, 'This group's too special to break up, don't let it end tonight,'" Turkington said. "Because this group is special and we just want to keep this team together, stay together for one more week."

Tomah can schedule a game against Portage, but if Friday was the Timberwolves' last game, Protz is proud of the season they put together."

"Just a great senior class, great attitude and great effort," he said. "That's what we asked all year, just give us your best attitude and your best effort. Every week was different and we didn't know what would come, but they showed up to practice, worked hard and gave great effort."

Tomah's Drew Brookman catches a touchdown pass with 1 second remaining in the first half of Friday's playoff loss in Baraboo.