High school boys basketball: No. 1 Onalaska comes back to beat No. 2 La Crosse Central
Share this
× 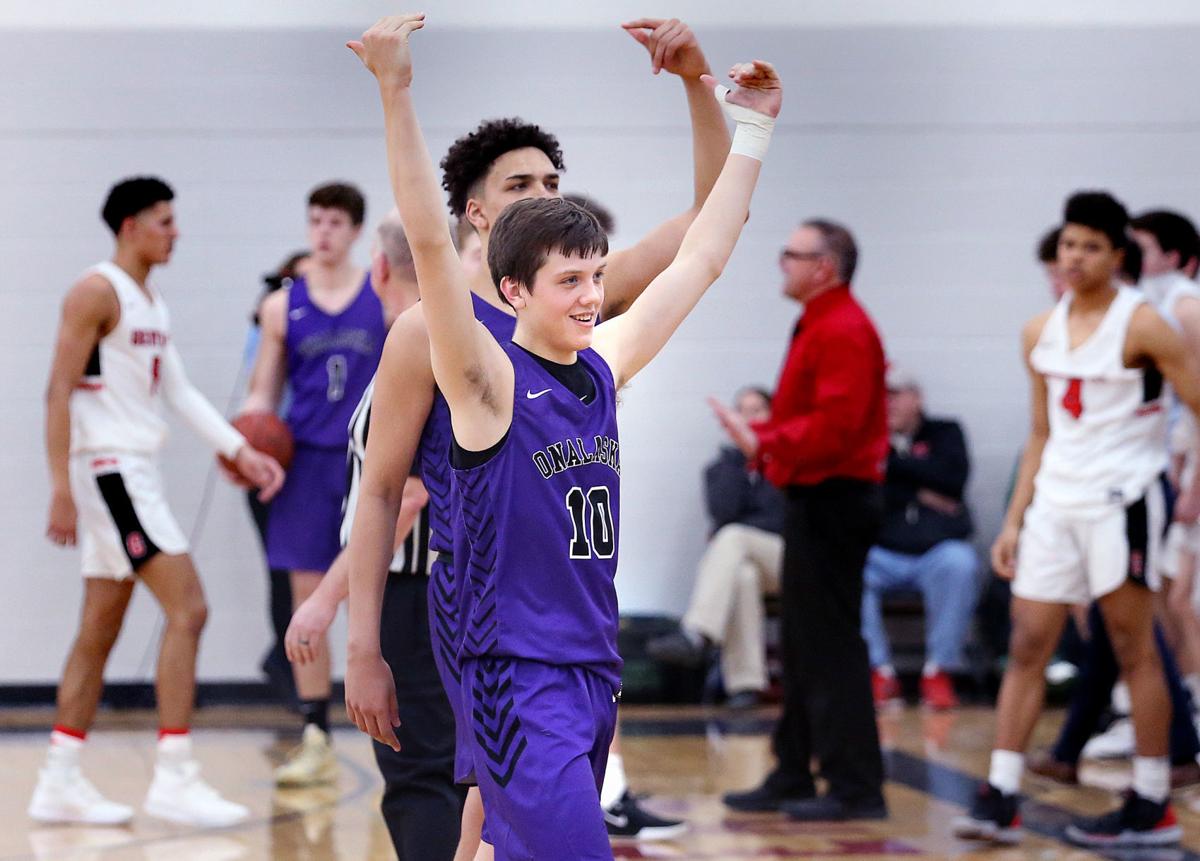 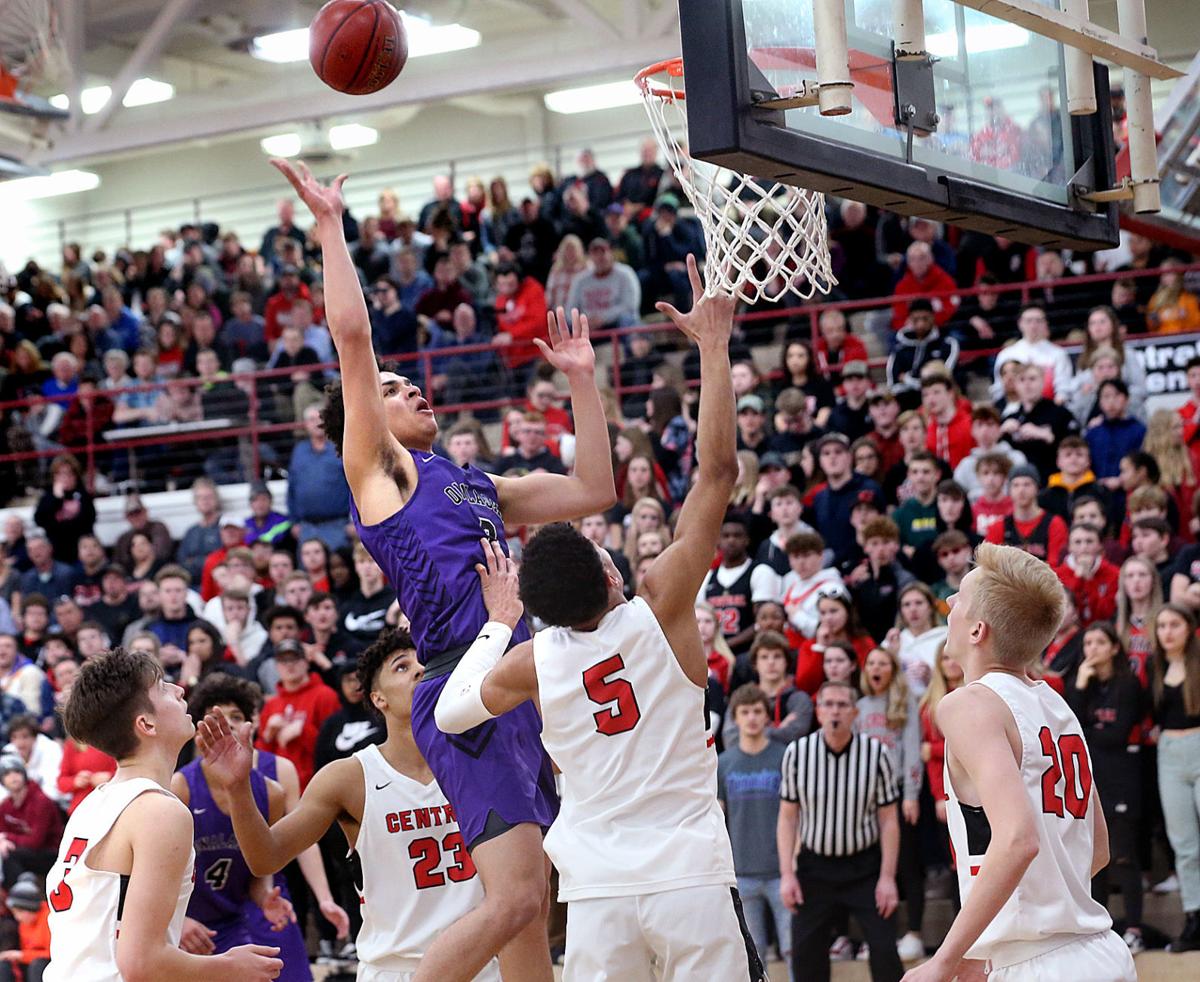 Tyrell Stuttley puts up a shot for Onalaska.

After getting his hands on a loose ball near midcourt, Onalaska High School senior Dakota Mannel pushed it ahead to teammate Sam Kick.

Kick was fouled and sent to the free-throw line with 1 minute on the clock as Mannel raised his bandaged left hand and asked for some noise from his student section by waving his fingers toward the court.

The top-ranked Hilltoppers held a six-point lead over second-ranked Central at that point, but the tide felt like it had turned for the last time.

And with that student section screaming its head off for the rest of the game as part of a crowd of more than 1,400 people, Onalaska fed the celebration with a 60-54 victory over the Red Raiders at Mark Sutton Memorial Gymnasium on Tuesday.

The Hilltoppers (19-1, 11-0) not only won their 15th straight game and first outright MVC championship since 2013, but they completed a regular-season sweep against a team that has appeared in four straight WIAA Division 2 state tournaments and had won 47 straight games on its home court.

“It’s big for us, but it’s also just going to make us work harder,” said Mannel, who had seven points — all on free throws — to go with four rebounds and two assists. “We’re happy to win the conference, but we also have bigger goals coming up.”

Senior Carson Arenz led Onalaska with 22 points to go with his six rebounds. He made 5 of 8 attempts from the 3-point line to help the Hilltoppers slowly reel the Red Raiders (15-5, 8-2) in before taking over in the final 4 minutes.

Central senior Johnny Davis scored a game-high 26 points and grabbed a game-high 15 rebounds, but Onalaska defended him well and rarely allowed him to catch the ball in position to score. Tyrell Stuttley and Victor Desmond rotated on Davis and received plenty of help in the paint to make him work hard for points.

Onalaska took just its second lead of the game at 48-47 when Desmond made two free throws with 4 minutes remaining. And the Hilltoppers, who gave up the first 11 points of the game, never again trailed by making 12 free throws down the stretch.

The Red Raiders made 2 of their final 11 shots after Desmond’s free throws and were left to go back to the drawing board in figuring out a plan to beat the Hilltoppers should they meet in the Division 2 postseason.

“Give them a lot of credit because those kids kept battling,” Central coach Todd Fergot said. “I think Onalaska did a great job of executing what it wanted to do, and I think we became a little stagnant. I think we lost our focus on execution a little.”

Central had the ball and a chance to tie just twice after losing the lead, and Stuttley and Mannel pulled down rebounds off the missed shots on those possessions.

Mannel made six of his free throws in the final 1:32 as Onalaska scored at least one point on 12 of its final 14 possessions.

Stuttley and Kick each added 12 points for the Hilltoppers, who turned the ball over once in the second half.

Arenz made the second-half comeback possible by making three 3-pointers in the first half and keeping his team afloat after the bad start.

“He was really good tonight,” Kowal said of Arenz, who made 6 of 11 shots and 5 of 6 free throws. “He hit some big shots for us, especially in the first half, and he’s a tough kid.”

Arenz got Onalaska on the board with a 3-pointer 4 minutes, 28 seconds after the game started to stop Central’s 11-0 run and later hit another to get the Hilltoppers within 18-10. Another 3 cut Central’s lead to 27-23 before Johnny Davis gave them a 29-23 halftime lead.

“I had to take advantage of the opportunities when I didn’t have Johnny or Jordan on me,” Arenz said. “They are really athletic and hard to get the shot over, so I had to take them when I got them.”

Tyrell Stuttley puts up a shot for Onalaska.