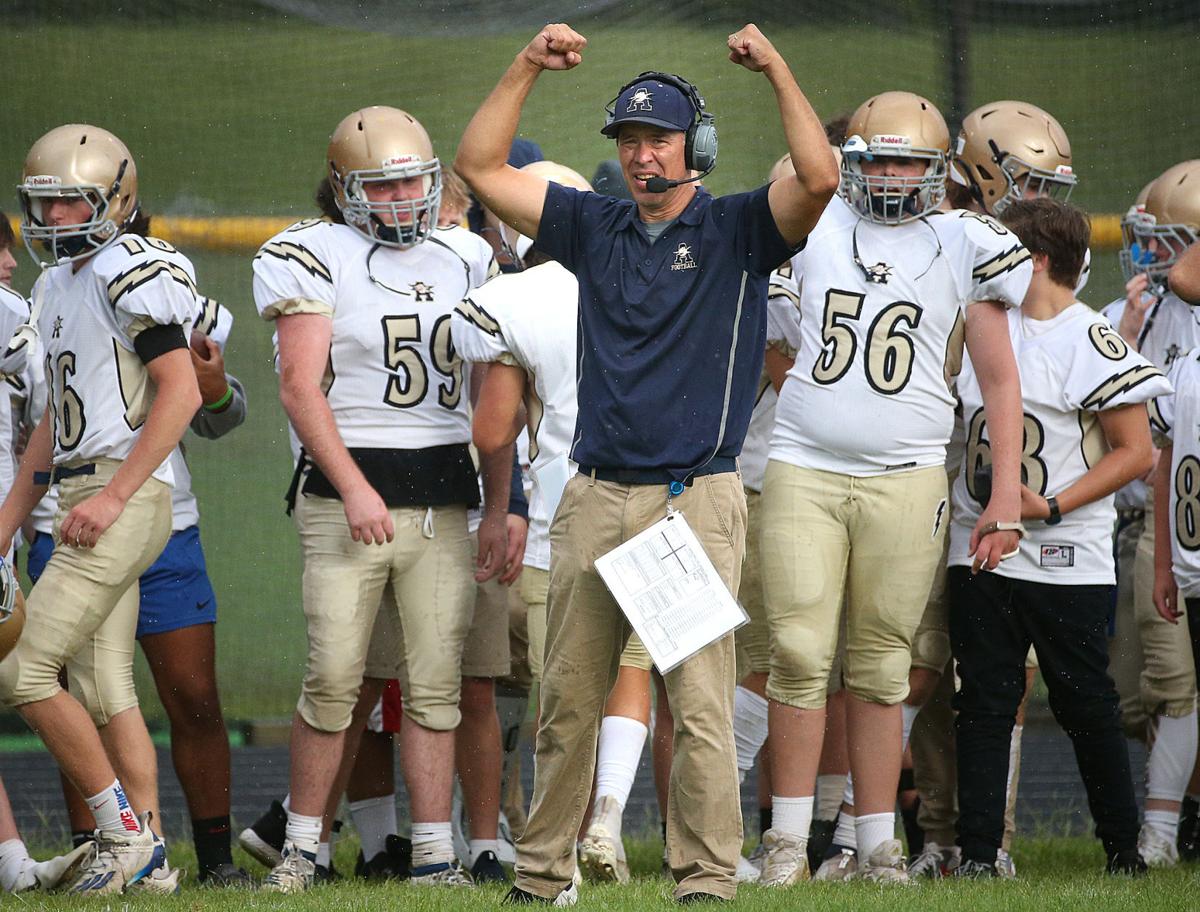 Aquinas football coach Tom Lee takes the undefeated Blugolds into a game at Prescott on Friday. 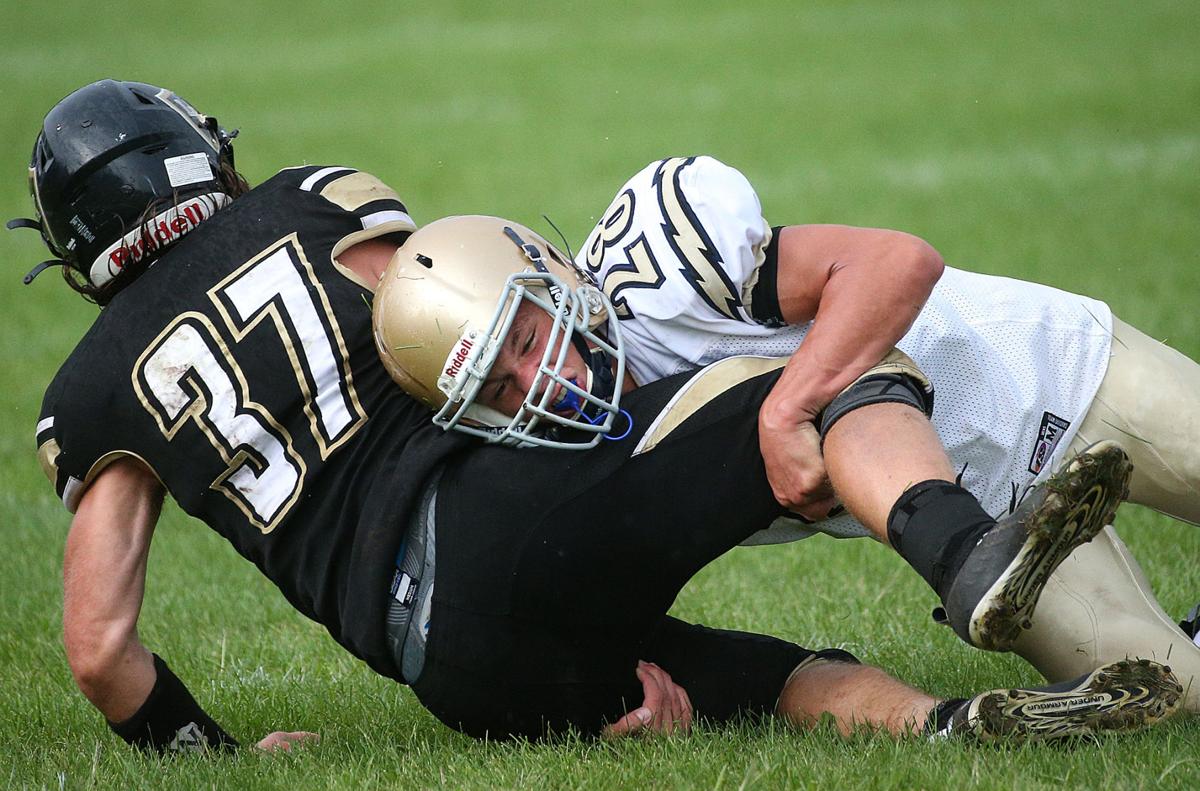 Aquinas' David Malin makes a tackle against a game against Onalaska Luther.

The Blugolds are living up to his preseason expectations in some areas and exceeding them in others, and that is making reality their best regular season in 14 years.

As a first-year member of the Coulee Conference, Aquinas (7-0) has already earned a share of its first championship since tying for the MVC crown in 2008. It has also won seven regular-season games for the first time since 2007.

The program’s climb from a stretch of winning three games from 2016-2018 has been filled with challenges, and Lee thinks the Blugolds are ready for another that presents itself in the form of Prescott on Friday.

“When we met on Monday, I have a bunch of stuff on the screen for them,” Lee said. “It said, ‘This team is exactly what you need right now.’

“They need to go against a legit playoff kind of team like this right now, and this will let us see where we stack up.”

Prescott (5-2), a crossover opponent from the Middle Border Conference, has five one-sided victories this season and lost its first conference game of the year last week to Ellsworth 34-7.

Lee, whose team is outscoring opponents by an average of 38 points per week, is focused more on the victories and what the Cardinals did right in those games as he reaches the end of the practice week.

The Cardinals can score points in bunches — they have scored at least 40 on three occasions — are good at keeping opponents out of the end zone with a pair of shutouts.

Lee doesn’t see either team getting shut out on Friday, but he knows the Blugolds are going to have to take advantage of the opportunities that arise when they have the ball. Prescott can bring pressure into the backfield, and Lee expects to see it, so protecting quarterback Jackson Flottmeyer, or at least getting him into space to throw, is essential.

“Some teams, I think, have seen us and think, ‘Oh, man, we can’t blitz,’” Lee said. “I think they are going to pressure us unlike we’ve been pressured because that’s what they do.”

Lee singled out inside linebacker Aiden Russell as one problem his blockers have to solve if Flottmeyer is going to have time to throw or if the Blugolds expect to run down the field after catching the ball.

It will be easier to unleash an offense that has been more efficient than any coach could expect. The Blugolds are getting scoring help from special teams and defense, but the team averages 49.1 points per game while averaging just 282 total yards per game.

The number of yards isn’t eye-popping but is put into more perspective when considering the Blugolds average 34.6 snaps per game. That’s more than 8 yards per play behind Flottmeyer’s cannon of an arm.

The junior has been tough to rattle this season with 68 completions in 86 attempts for 1,596 yards, 24 touchdowns and one interception. That gives him averages of 23.5 yards per completion and 18.6 yards per attempt.

That, Lee said, is what has dictated the offensive flow of the offense. The coach is just as excited to see what Calvin Hargrove, Joe Penchi or David Malin can do after taking a handoff, but it’s hard to move away from Flottmeyer’s accuracy and big-play ability with receivers Quinn Miskowski or Jack Christenson.

“It’s like my good buddy (assistant coach Steve) Kramer says,” Lee said. “We can run the ball for 5 or 6 (yards) or throw it for 19-and-a-half. Might as well throw it. We’re happy because both are working.”

Russell should also give the Aquinas defense a challenge. He averages 6.5 yards per carry and has 922 yards and 15 rushing touchdowns. Teammate Grant Stanton has added 407 yards and five touchdowns for a team that averages 220 yards on the ground.

Todd Sommerfeldt can be reached at todd.sommerfeldt@lacrossetribune.com or via Twitter @SommerfeldtLAX

Aquinas football coach Tom Lee takes the undefeated Blugolds into a game at Prescott on Friday.

Aquinas' David Malin makes a tackle against a game against Onalaska Luther.