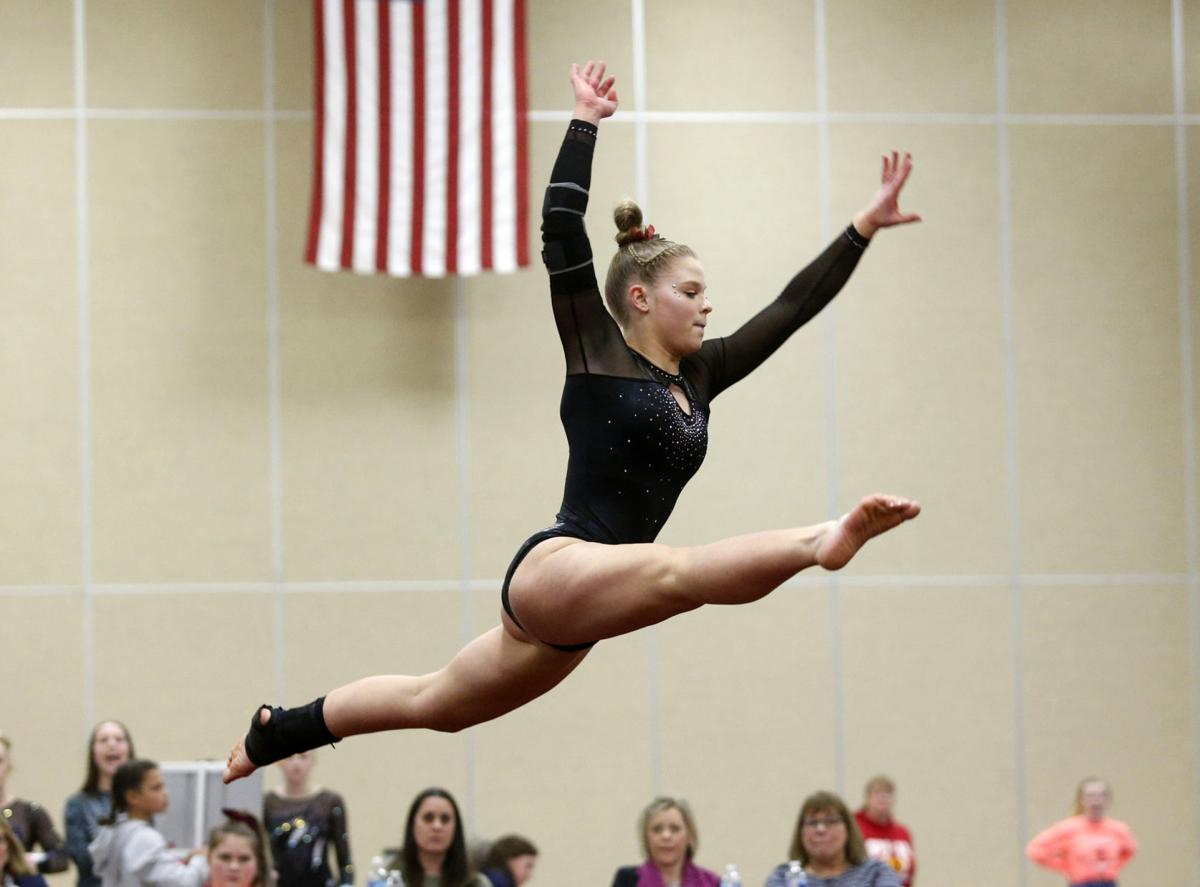 Logan/Central senior Caelen Lansing leaps into the splits during her floor routine during the McLellan invitational in Holmen on Saturday. Lansing has accepted an invitation to join the University of Iowa gymnastics team as a walk-on. 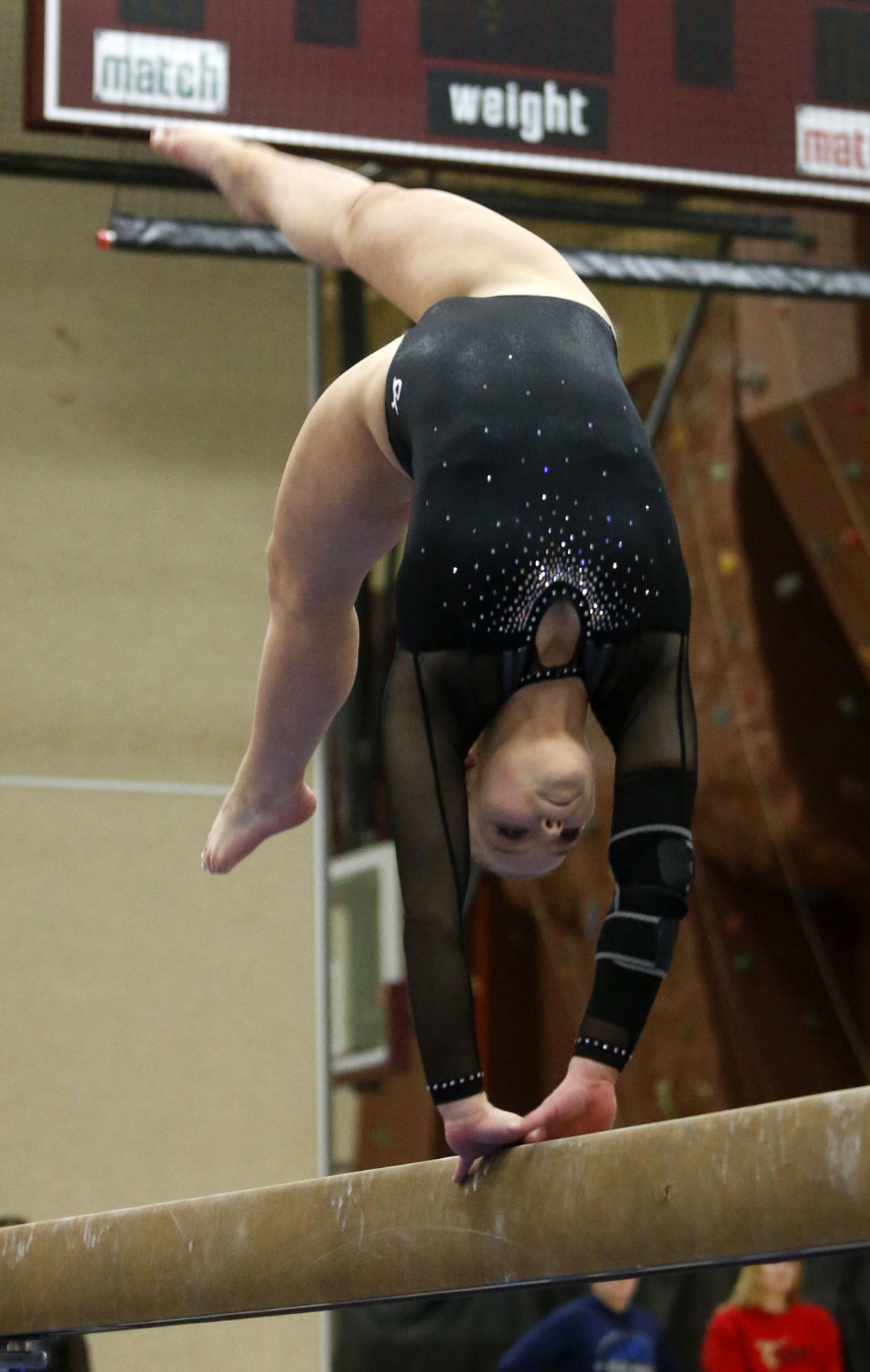 Central/Logan's Caelen Lansing performs a back handspring on the beam near the end of her routine during the McLellan Invitational in Holmen on Saturday.

Being an athletically gifted, extremely motivated and a tireless worker elevates her from many of her peers, but there is something else about Caelen Lansing that lifts her to another, almost unreachable, level.

For the 16-year-old Lansing, a senior at Central High School and one of the area’s – and state’s – top gymnasts for the Logan/Central co-op team, it is mind over matter. Whether performing on the floor exercise, the beam, the uneven bars or the vault, Lansing’s mind tells her body it can execute nearly any skill — with practice, that is.

And then she does it, mostly with jaw-dropping results.

“Since she stepped into our gym we knew that she was destined for great things as, I guess we call it, ‘Pulling a Caelen.’ You ask her to try something and within two or three tries, she’s got it,” said Krystal Young, the coach of Logan/Central the past 10 years.

“It is not a ‘no fear’ thing as much as it is a drive to always be better. But she doesn’t act like she’s the best; humble is how she has been since I have met her. She is a celebrated athlete in the gymnastics community, but she doesn’t brag about it. She celebrates her victories very quietly.”

That is probably why few people outside the tight circle of gymnastics know that Lansing is headed to Division I gymnastics this fall at the University of Iowa. Yes, Lansing has been extended – and accepted – an offer to walk on to the Hawkeyes’ gymnastics team.

Lansing could very well be the first area gymnast to reach the Division I level, as longtime coaches and officials at the well-known McLellan Invitational on Saturday could not recall anyone else achieving Division I status from the La Crosse area.

For Lansing, it’s been a wild ride and a dream come true.

The journey to Iowa City officially ended this week when the Hawkeyes confirmed in writing that Lansing – a top all-around, two-time WIAA state qualifying gymnast – had been invited to join the team as a nonscholarship walk-on this fall.

Lansing, who also was considering Division III powerhouse UW-La Crosse, made an unofficial visit to the Iowa campus with her parents, Kim and Paul Lansing, on the weekend of Jan. 10. It was a whirlwind trip where she witnessed an Iowa meet, met and stayed with the team, then talked extensively with the coaching staff.

“I stayed overnight with the team and got to see all of their meet on Saturday (Jan. 10), then had a visit with the coaches,” Lansing said. “It was when we were having breakfast that they said they would have me as a walk-on on the team. It was very shocking to me.

“We (her parents) really didn’t know because they were like we may not be able to tell you at this point, it might be later. So I went into the visit not really expecting to get an answer at all.”

What she received was the opportunity she had been working years for, persevering through a serious injury for, and simply dreaming about for countless nights.

“I was just so shocked at that point (of the offer) because this was something I had been working towards for so long,” Lansing said. “I have wanted to go to the University of Iowa for a really, really long time because my Dad’s side of the family is from Iowa and I have always wanted to go there because of the school even before gymnastics was on the table.

“So the fact that I could get on the team and continue doing the sport that I really love at my dream school is awesome.”

Lansing, a 4.0 student, intends to pursue an undergraduate degree in pre-med, then attend med school.

“And then,” she says, “I am not 100 percent sure where, but right now I am thinking sports medicine or neonatology. Yes, I would like to be a doctor.”

Before the never-resting Lansing dives into the medical field, she has her eyes peeled on helping the Logan/Central team perform at its highest level, then reaching the state meet for a third time. This time, staying healthy is the key.

Lansing recently passed the one-year anniversary (Jan. 15) of the day she suffered a torn Ulnar Collateral Ligament (UCL) in her right elbow while working on her bars routine in practice. She’s 100 percent now, but hasn’t forgotten that day.

“I fell forward on my bars dismount and discloated (her right elbow), and that is what tore the Ulnar Collateral Ligament off the bone,” Lansing said, matter-of-factly. “I heard it pop once, then it popped again. I think popping back in is what I heard the second time.

“I fell and like my whole arm was in pain. My coaches were like, ‘I don’t think you broke anything,’ so they were thinking it would be like two weeks out of gymnastics.”

A trip to see a doctor, then a specialist, revealed that Lansing may require surgery at the worse-case scenario, and would be required to sit out three to six months at the least.

Not Lansing, and this is one instance where she revealed her true grit, her undeniable passion and determination for gymnastics, and her willingness to meet any challenge head on.

“I decided I was going to do stuff without my arm. I wasn’t allowed (by doctors) to do stuff with my arm, and technically, wasn’t supposed to be doing stuff at all,” said Lansing, who wore a brace during practice and competition. “My parents were on board with this, surprisingly. I had my arm in a big brace, and it kind of looked like a robot as I had it (right arm) locked in a 90-degree angle.”

Her coaches changed her routine, and she advanced to state in the floor and beam despite the injury.

“I am sure they are out there, but I have never known an athlete in my years of coaching on my team that I would be able to create that (routine) for,” Young said of coming up with a no-hands floor exercise routine. “We worked together and figured out what she could do, and still make her successful.

“She wasn’t going to let the doctors hold her back.”

Lansing, remarkably, scored a 9.283 on the floor exercise at the state meet in Wisconsin Rapids, leaving her tied for fourth place. She also put up an 8.817 on the beam, which left her 16th in the state field.

All without the use of her right arm. Well, either arm.

Lansing used that experience to push herself even more her senior season, a season in which she has goals, but is truly enjoying herself and her teammates.

Teammates that look up to her, but also know they can approach her with any question.

“I think watching Caelen is really inspiring, watching her do all the things she loves to do,” said junior teammate Maddisyn Mark. “Watching her helps me learn what I should do better. She is really part of the team and she is really helpful to everybody. She is just really fun to be around.”

Turn to B3 for the Tribune's gymnastics honor roll

Logan/Central senior Caelen Lansing leaps into the splits during her floor routine during the McLellan invitational in Holmen on Saturday. Lansing has accepted an invitation to join the University of Iowa gymnastics team as a walk-on.

Central/Logan's Caelen Lansing performs a back handspring on the beam near the end of her routine during the McLellan Invitational in Holmen on Saturday.