The Vikings (17-5) ran their winning streak to five games with two wins over the Red Hawks (13-6), who had won six of their past seven. Holmen won the first game in the bottom of the eighth inning before winning a five-inning second game.

Senior Jayda Staige struck out six and allowed five hits in pitching a complete game in the opener. She also drove in the winning run in the eighth. Emily Szak was 2 for 4, and Sydney Jahr hit an inside-the-park home run for Holmen in the first game.

Genna O’Neill pitched the first game and hit a home run during a 2-for-4 performance for the Red Hawks.

Holmen’s Kaylin Metzler was 3 for 3 with a double and four RBI in the second game, which was won by pitcher Marci Jacobson (three strikeouts, no walks, three hits allowed in 3⅓ innings). Ellie Kline doubled, walked and scored twice for the Vikings.

Lindsey Lettner was 2 for 2 with a walk and scored twice in the second game for G-E-T. Ryann Duffenbach drove in two runs and scored another for the Red Hawks, who finished second in the Coulee Conference.

WESTBY — Jayda Berg threw a three-hitter to help the Norsemen (17-1, 11-1) win their fifth straight game and clinch the conference title.

Berg, who struck out 13 and walked none in seven innings, was also 1 for 3 at the plate with a double.

Hanna Nelson was 2 for 2 with two RBI, while Kenzi Stellner and Autumn Ward drove in a run apiece for Westby, which scored one in the second, two in the fourth and one in the fifth.

FOUNTAIN CITY, Wis. — Maddie England and Emma Fortier drove in runs to give the Cardinals a 3-0 lead going into the bottom of the fourth inning, but the Pirates scored four unanswered runs to take the lead.

England was 1 for 2, Fortier was 1 for 3, and Jadyn Larson had the only other hit for the Cardinals, who committed two errors.

GALESVILLE — The fourth-seeded Red Hawks scored eight runs on nine hits in the second inning before holding off the surging fifth-seeded Rangers.

Trailing by three in the top of the seventh, Logan had the bases loaded with one out. But G-E-T turned a 1-2-3 double play to end the game.

The Red Hawks, who improved to 9-9, will play at top-seeded West Salem on Tuesday.

The Rangers finish the season at 5-13.

SPARTA — The third-seeded Spartans responded to a run from the sixth-seeded Tigers in the top of the first inning with two in the bottom of the inning and another in the second.

Brett Stuessel — who allowed two runs, one earned, on nine hits while striking out seven in seven innings — earned the win for Sparta (6-13), which took advantage of four errors and will play at second-seeded Arcadia on Tuesday.

Stuessel was also 2 for 4 at the plate with an RBI.

WESTBY — The Norsemen got out of a bases-loaded situation with no outs in the seventh inning to eliminate the Knights.

Westby scored four runs in the bottom of the fifth to tie the game at 5 and went up 9-5 with four more runs in the sixth. Luther scored twice in the top of the seventh and loaded the bases before Westby turned to relief pitcher Hudson Lipski, who struck out the side to end the game.

PRAIRIE DU CHIEN — The second-seeded Blackhawks finish the season at 10-8.

MELROSE — The Mustangs, who improved to 14-6, will play at top-seeded Aquinas on Tuesday.

BANGOR — The third-seeded Cardinals (11-3) grabbed an early lead with six runs in the bottom of the first and four in the second, while Hank Reader allowed only three hits in five innings.

Reader, who was also 1 for 3 at the plate, struck out 10 batters and only walked one.

Sam Wittmershaus was 2 for 3 with four RBI, while Evan Wolfe and Ashton Michek drove in two runs apiece.

Bangor will play at second-seeded Seneca on Tuesday.

ONTARIO, Wis. — The Eagles scored in every inning but the third, and pitcher Bowdy Dempsey reached safely four times with the highlight being a fifth-inning home run.

Dempsey was 3 for 3, drew a walk and scored three times as Cashton advanced to the semifinal round. Outfielder Brett Hemmersbach also reached safely four times and was 3 for 3 with three singles and a walk.

BLAIR — The fourth-seeded Wildcats, who improved to 9-10, rallied from a 4-0 deficit and scored the go-ahead with two outs in the bottom of the sixth on an Eli Swenson double.

Isaiah Washington was 2 for 3 with a triple and an RBI for Blair-Taylor, which will play at top-seeded Independence/Gilmanton on Tuesday.

TOMAH — The Timberwolves won when Braeden Pierce led off the bottom of the seventh with a walk, moved to second on a sacrifice by Drew Brookman and to third on an error. An intentional walk to Evan Long was followed by a long single from Caden Harmel, who brought Pierce home with the winning run.

Harmel and Hunter Miller combined on a one-hitter for Tomah (9-10). Harmel started and pitched three no-hit innings with two strikeouts, and Miller struck out two the rest of the way.

Catcher Tucker Francis was 2 for 3, and Josh Georgeson and Luke Duncan had run-scoring hits.

DE SOTO — A five-run third inning gave the Pirates the lead they needed to win their second straight game and improve to 11-5.

Josh Boardman, Bryce Grelle and Vincent Buchner each drove in two runs, while Andrew Thompson was 4 for 4 and scored three runs.

In a game that ended in the 60th minute, the second-seeded Blugolds were led by senior Amelia Topolski, who had five goals and one assist at Field for Kids.

The Panthers will play at second-seeded Madison Edgewood on Saturday.

MELROSE — Fourth-seeded Melrose-Mindoro/G-E-T will play at top-seeded McFarland on Saturday.

MADISON — Seventh-seeded Arcadia/Independence had its season come to a close.

Onalaska's Max Klein handed Tomah’s Jonah Nick a 6-3, 5-7, 10-8 defeat in the third-place match of the No. 3 singles bracket. Both players were swept in the semifinal matches.

Onalaska’s Alvin Hsieh and Austin Noble got off to a good start in their third-place match at No. 2 singles, but a 6-3 win in the first set was followed by 7-6 (5), 10-7 losses to Menomonie’s Joaquin Gamez and Kai Wei Chen.

Onalaska scored 26 points and placed fourth as a team. Eau Claire memorial won with a score of 44 and was followed by Hudson (32) and Menomonie (30).

Neumann shot a 5-over-par 77 to grab one of the final qualifying spots.

GALESVILLE, Wis. — An RBI single to left-center field by Melissa Flynn in the bottom of the seventh inning gave the G-E-T High School softball…

The Blugolds are now tied with Onalaska for first place in the MVC, and the RiverHawks could enter that tie with a win over Tomah on Tuesday.

Dobbins shot an 8-over-par 78, which was good for fourth overall and earned him the final of three individual qualifying spots.

WIAA girls soccer: Onalaska too much for La Crosse Central in Division 2 regional

The win is the sixth in a row for the second-seeded Hilltoppers, who will host third-seeded New Richmond on Saturday. 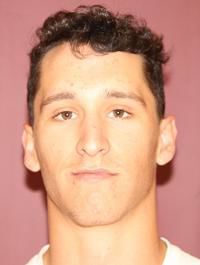