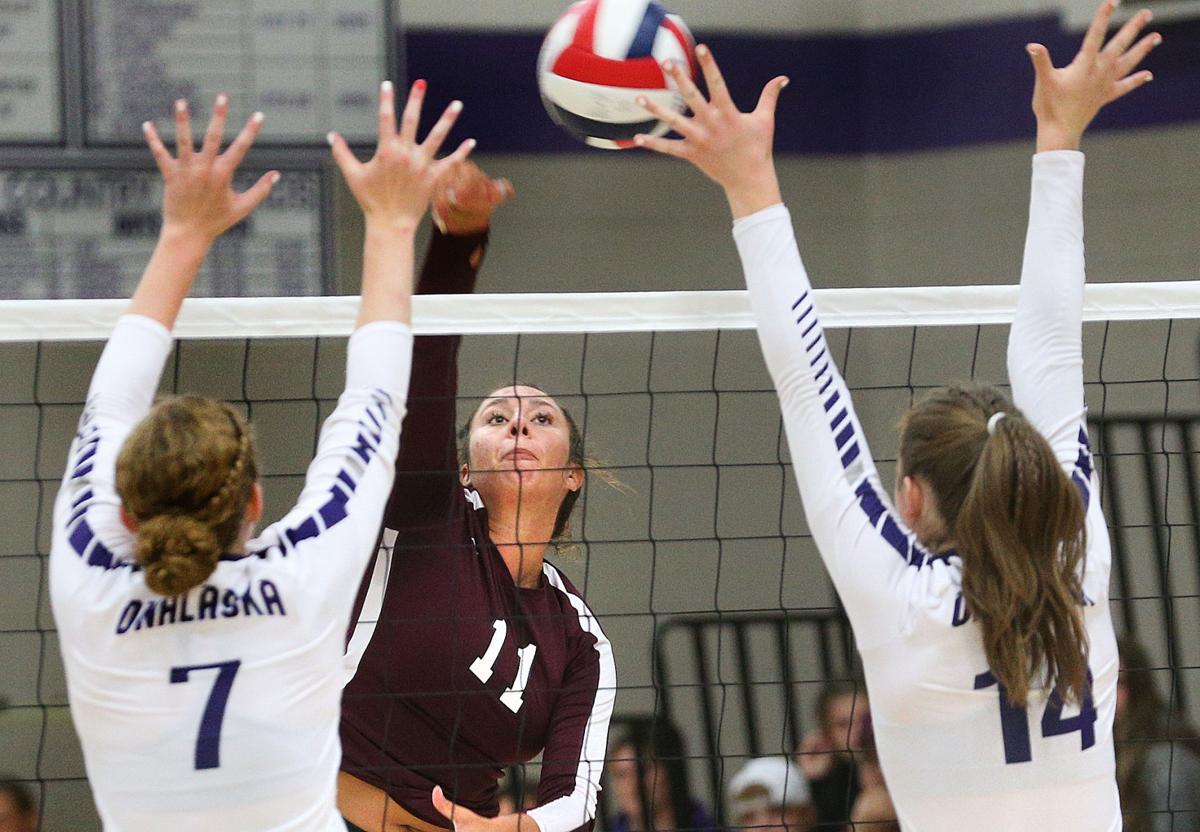 Holmen's Mara Schmidt, center, spikes a ball through the defense of Onalaska's Olivia Tillman, left, and Halie Kapelke. Schmidt has committed to play beach volleyball for the Division I University of Southern Mississippi. 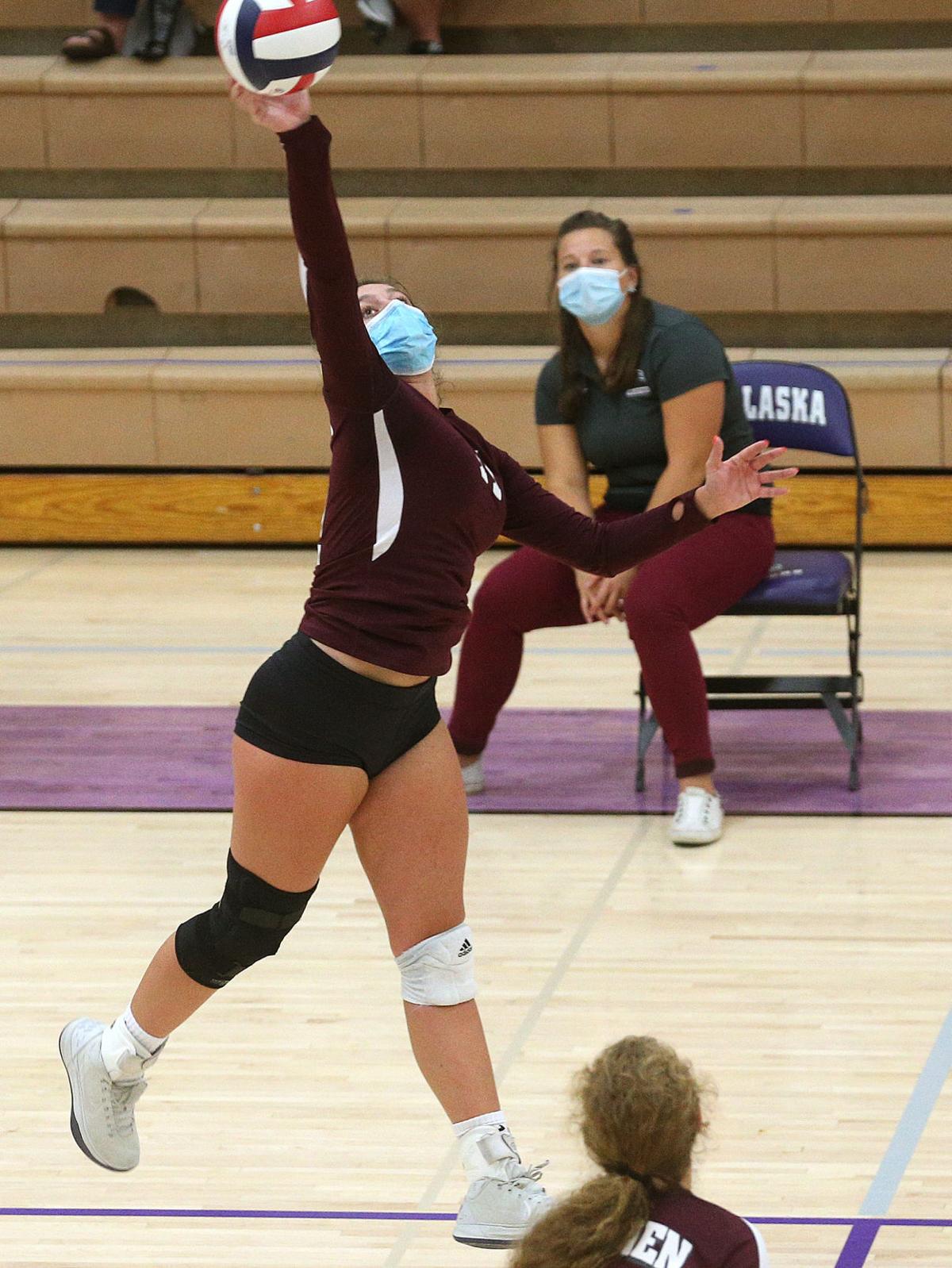 Mara Schmidt hits for Holmen in a match against Onalaska during an abbreviated 2020 fall season.

HOLMEN — It was built as a tool to keep Mara Schmidt and her Holmen High School volleyball teammates sharp as they dealt with the constrictions of the COVID-19 pandemic.

The sand volleyball court on the Schmidt family’s property was in no way meant to change the junior’s path in life, but that’s exactly what it did.

While the court served its primary purpose of helping the Vikings have a place to train during a pandemic and turn themselves into a powerhouse program, it also opened Schmidt’s eyes to what could be considered a new sport, and she responded by finding opportunities to play it all over the country.

“When we decided to build the court on our land, all I thought about was working on my indoor (volleyball) skills,” Schmidt said. “Coach Dipen (Patel) from UW-L(a Crosse) found out we were building the court and got in touch with us about some possible training.

“It all went from there.”

Patel worked with Schmidt and other players on that sand court during the summer of 2020, and Schmidt quickly fell in love with learning the intricacies of a sand game that is much different than the indoor version she already enjoyed.

“After I started training, I played in a tournament and qualified for nationals right away,” Schmidt said. “I was like, ‘Wow, this is something I really love to do.’”

Schmidt’s current focus is back on the indoor game because the Vikings are about to tackle the most important part of their schedule with a regional championship match against visiting Monona Grove at 7 p.m. Saturday.

Holmen (26-2) earned a No. 1 sectional seed and received a semifinal bye. A win over the Silver Eagles sends it to DeForest for a sectional semifinal Thursday, and the reward for a victory there is a sectional final at Baraboo on Oct. 30.

The Vikings were sectional finalists during the fall alternative season last spring, and most of the players on this team contributed then. The goal quickly became to get over the hump this year and become a state qualifier for the first time in program history.

Schmidt, although just one of 10 seniors on the roster, is a key piece to that becoming a reality.

“Mara brings a whole new perspective to the court because she plays beach volleyball,” Holmen senior Ellie Kline said. “When you play beach, you learn a bunch of new shots and a lot of new things.

“She brings a non-traditional game of volleyball to the (indoor) court, and I think that helps us do some unexpected things on the court. It’s hard for (opponents) to know what she’s going to do.”

Schmidt learned that with a variety of playing partners in a two-person game that requires a much wider range of skills than that of an outside hitter indoors with five teammates helping the cause.

“Beach is a lot more of a mental sport, I think,” Schmidt said. “Having two of you is so different because you have to be really smart about ball placement on every shot and every motion you make.

“If you take a bad step in beach, it’s really hard to correct it. And jumping repeatedly in the sand is a lot harder and is something you really feel when you get to the second and third days of the tournaments you play.”

Training for all of that, Schmidt believes, has made her a more explosive player for this highly anticipated senior season. She leads the team with 215 kills (3.1 per set) and has converted on 38.5% of her attempts at the net.

“After doing what she’s done in beach, she gets to the hard court, and it’s so much easier to move laterally and be able to jump vertically,” Holmen coach Sammi Maier said. “It’s helped with her ability to have explosive moves and have a little better vertical at the net.

“She gotten really smart with her shots and making defenders move. That’s an element of the game that she had to pick up playing beach.”

Schmidt learned all of that through traveling the country with various partners she met through playing organizations. Performing in front of crowds at national tournaments in places like Clearwater, Fla., Atlantic City, N.J., or other places also shifted Schmidt’s volleyball future. Monthly trips to Florida began last winter to train and play in those tournaments and showcases.

Beach volleyball is a growing sport in collegiate athletic programs in southern and western states, and coaches started taking notice of what this girl from Wisconsin could do. Near the end of August, Schmidt accepted a scholarship offer from the Division I University of Southern Mississippi, and she can’t wait to take her game to another level with the Golden Eagles.

“I grew up watching April Ross play in the Olympics, but I was under the impression that was something you could do if you lived in California or Florida,” Schmidt said. “I didn’t really have an idea that it was something I could do or go to college for being from Wisconsin.

“So I’m very grateful that we made the decision to put the court because it led to all of these things I wouldn’t be doing today.”

WHAT: A WIAA Division 1 regional championship

Holmen's Mara Schmidt, center, spikes a ball through the defense of Onalaska's Olivia Tillman, left, and Halie Kapelke. Schmidt has committed to play beach volleyball for the Division I University of Southern Mississippi.

Mara Schmidt hits for Holmen in a match against Onalaska during an abbreviated 2020 fall season. 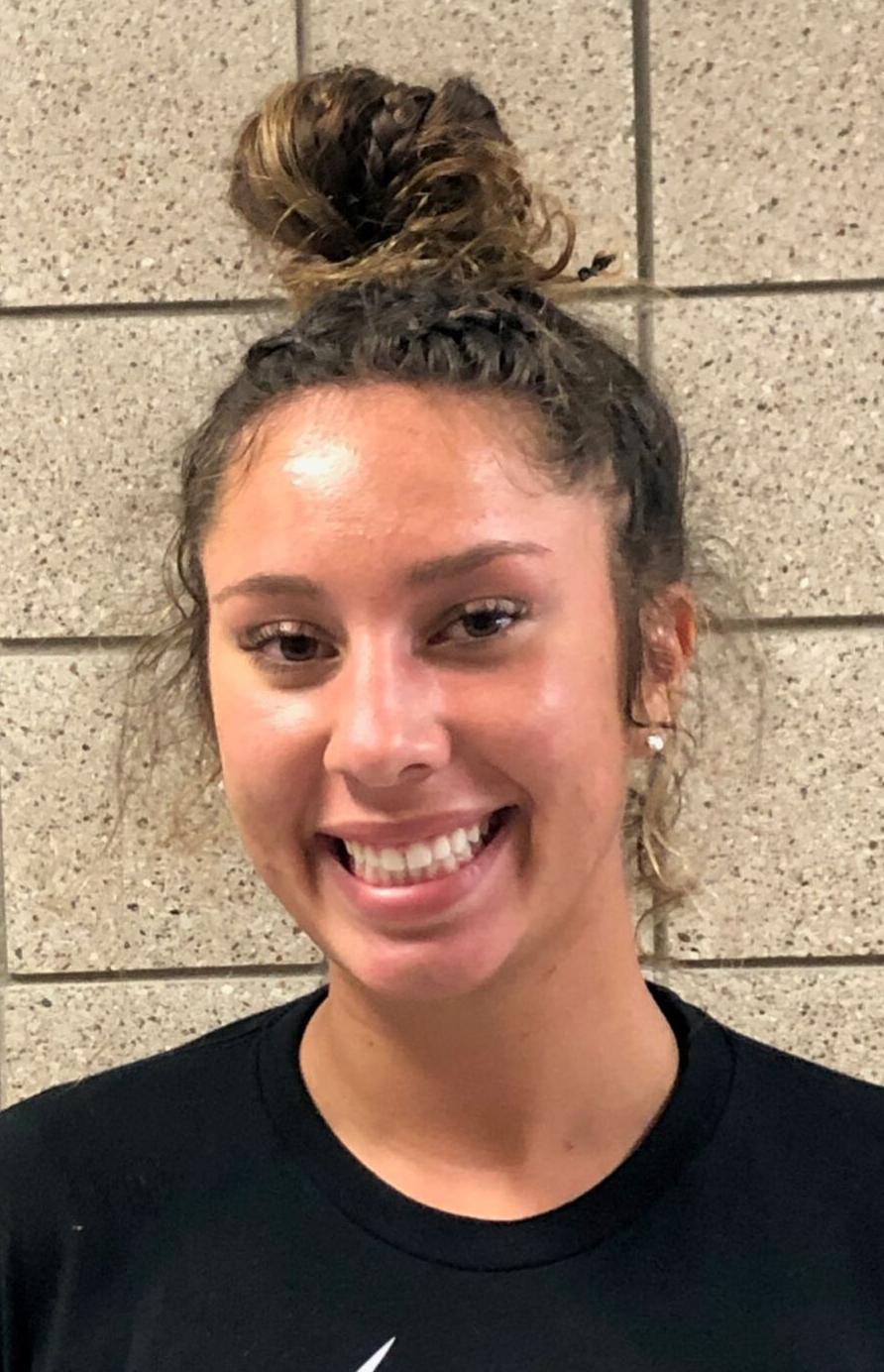