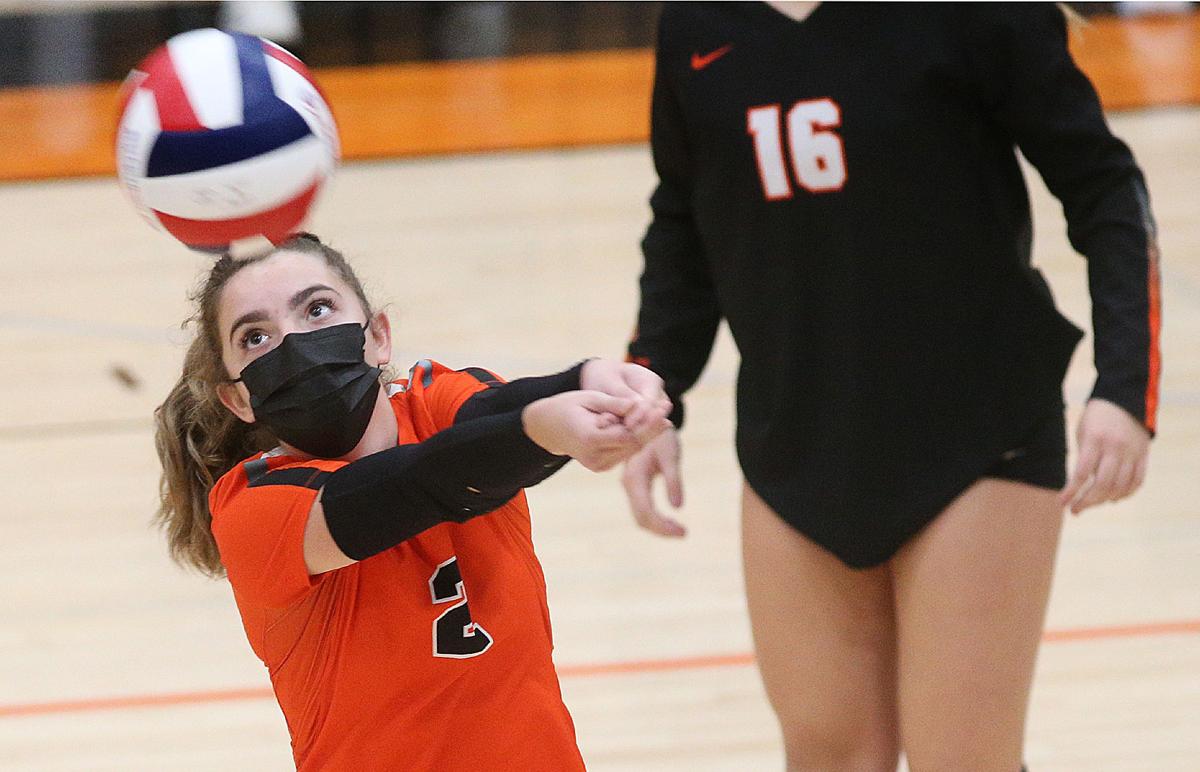 West Salem's Ally Priebe plays a ball during a Coulee Conference match against Black River Falls. Priebe and the Panthers have completed an abbreviated season with an undefeated record and won 52 straight matches against conference opponents. 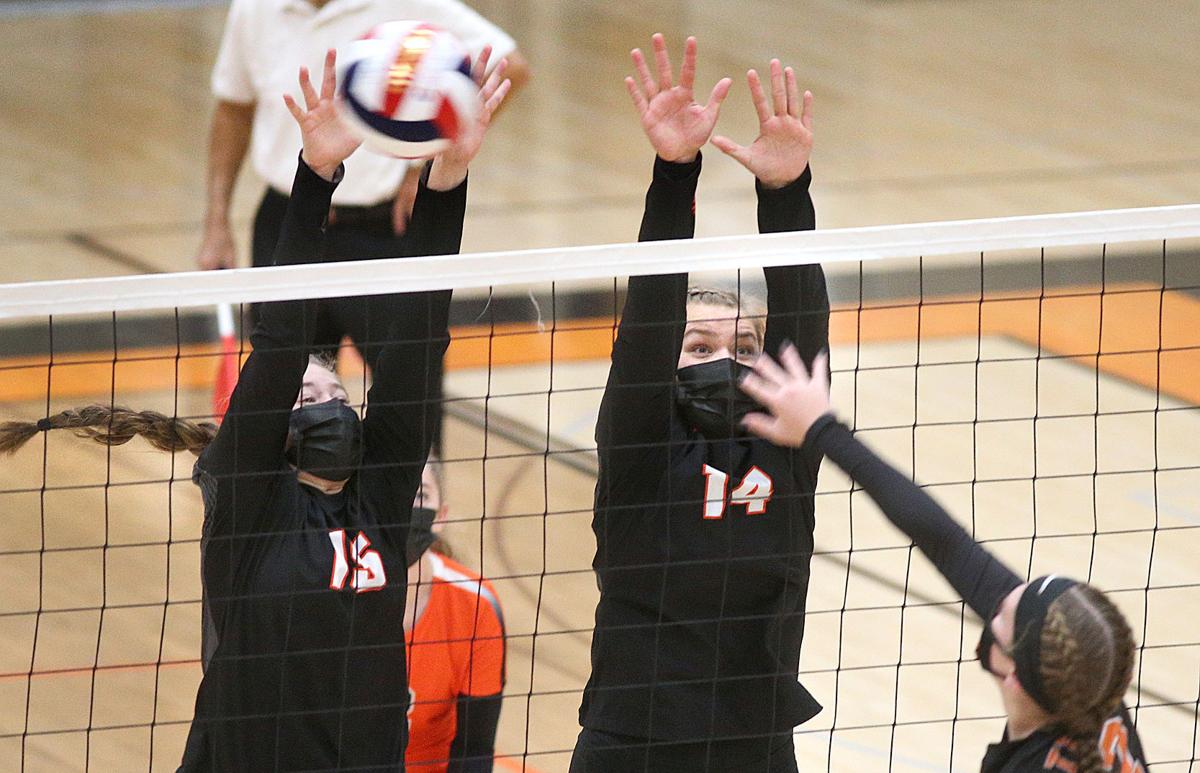 West Salem's Anna McConkey, left, and Jaden Hammes go for the block against Black River Falls on Tuesday. The Panthers enter the postseason with a 6-0 overall record and top seed in the WIAA Division 2 regional tournament.

WEST SALEM — It’s printed right near the wrist of their long-sleeve jerseys, so each time a player on the West Salem High School girls volleyball team goes to pass, set, or serve, she knows what she’s playing for.

The Panthers don’t yet know what they have to play for this season in terms of team success.

They missed most of the Coulee Conference schedule, so there is no fifth straight championship. The WIAA has scheduled a regional tournament, so West Salem gets to compete in that this week. The hope is that sectional state tournaments follows, but they know all too well that nothing in guaranteed during the COVID-19 pandemic.

So the Panthers concentrate on each other, and the volleyball family, maybe more than ever, takes center stage.

One of its most prized possessions is a conference winning streak that dates back to 2015. West Salem (6-0 overall, 4-0 in the Coulee) spent the past week building that streak to 52 matches by beating Black River Falls in five sets on Tuesday and Viroqua in three on Thursday.

“It was a goal for the girls, because some of the girls haven’t been defeated in conference for their whole four years,” Panthers first-year coach Becki Murphy said of the streak after beating Tigers. “That was a team goal that they came up with, and we need to keep working in practice to achieve that goal.”

They did with a dominant performance against the Blackhawks two days later, and it paved the way for a Division 2 regional semifinal at home against either Arcadia or Neillsville on Oct. 22.

Both Murphy and senior Kendall Gerke confirmed after beating Viroqua that the team feels ready for the postseason. Getting there this time, however, has been a much different process.

Figuring out how to practice and play isn’t a hurdle unique to West Salem, but doing so at the high level to which the Panthers have become accustomed has been the mantle that this particular group is trying to uphold.

“It’s definitely not what any of us expected, but it’s better than having nothing, so we’ll work with whatever we get,” said Gerke, who paced West Salem with 10 kills and 25 assists against Black River Falls.

“It’s really just working on the fly and seeing what works, and changing it right there during the games.”

In most years, teammates get a chance to chat about strategy during lunch, or connect in the hallways before class, but as with most things in 2020, much of that is done virtually.

“We make sure that we keep in touch with each other, and we’re always checking in,” said sophomore Jaden Hammes. “School has been stressful, so keeping in touch and checking in has been helping everyone out. And even if it’s just a Zoom call, we can just see each other and check in, and that helps.”

Whenever the Panthers gather during a game or practice, Murphy makes sure to remind the team to appreciate where they’re at.

“Every time we huddle we say ‘Hey, we made it here’ and we’re excited because we don’t know if we’re going to get shut down again,” said Murphy, the team’s third coach during the current winning streak. “The kids are glad to be back on the court, and we’re just trying to go day-by-day and really appreciate the season.”

West Salem wants to savor each day, but of course, keep winning in the process. The prevailing factor in that, it seems, is the family camaraderie that’s been built and the trust in each other to understand what needs to be done despite the limited time together.

The Panthers have balance throughout the lineup, and Murphy has had to scramble a bit to figure out how the pieces work together. The adjustments she has made through a six-match season appear to be right on the mark.

Murphy joked about the winning streak being mentioned while interviewing for the job. It isn’t often that a coach steps into such a situation.

“I was asked what I would do if I lost,” Murphy said. “It’s definitely strange being in that position with the team not losing (in conference) for so long.

6: Matches won without a loss during this abbreviated season

3: Coaches during the streak. Tina Thompson's 2016 team was 12-0, Brett Thompson coached the next three seasons and was 36-0, and first-year coach Becki Murphy is 4-0

UP NEXT: WIAA Division 2 regional semifinal vs. either Arcadia or Neillsville on Oct. 22 at West Salem

West Salem's Ally Priebe plays a ball during a Coulee Conference match against Black River Falls. Priebe and the Panthers have completed an abbreviated season with an undefeated record and won 52 straight matches against conference opponents.

West Salem's Anna McConkey, left, and Jaden Hammes go for the block against Black River Falls on Tuesday. The Panthers enter the postseason with a 6-0 overall record and top seed in the WIAA Division 2 regional tournament.