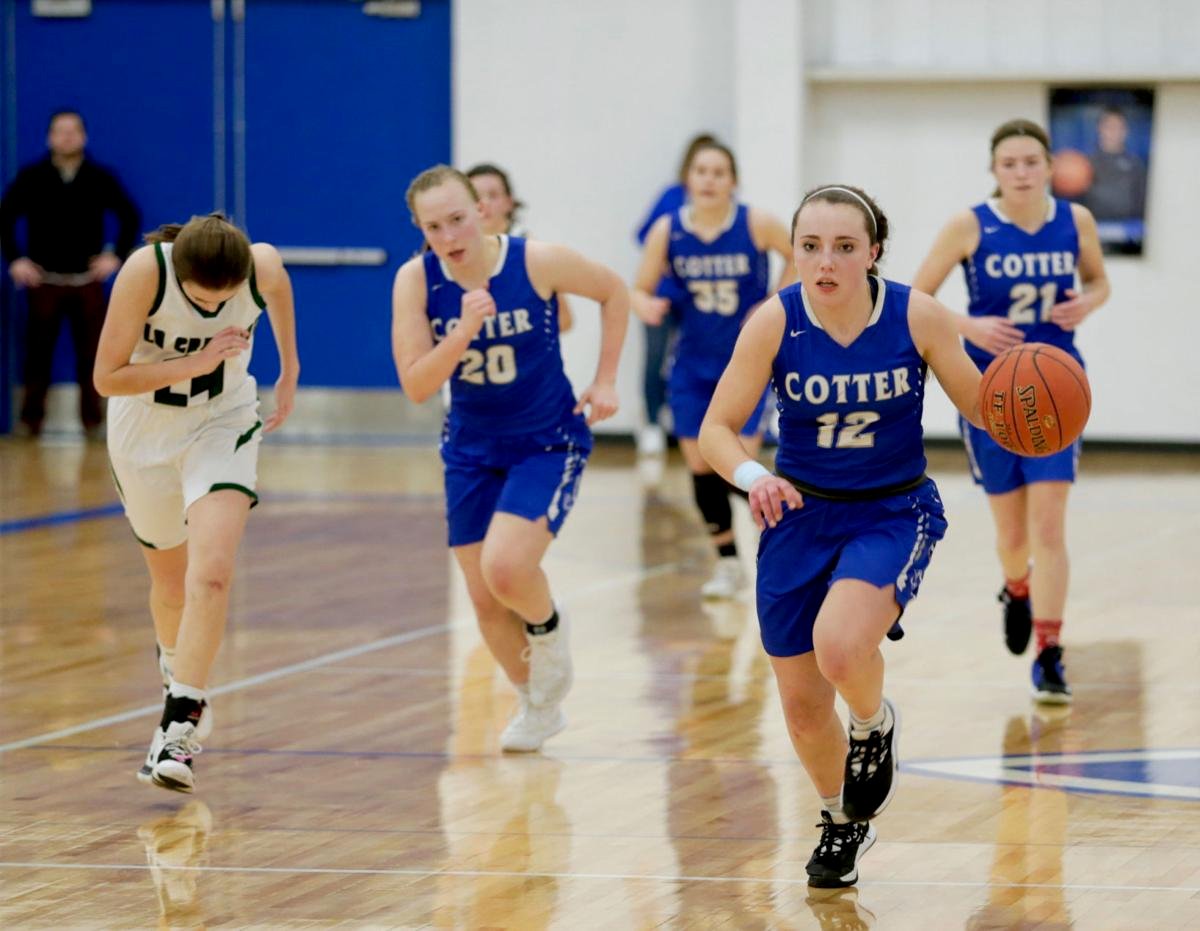 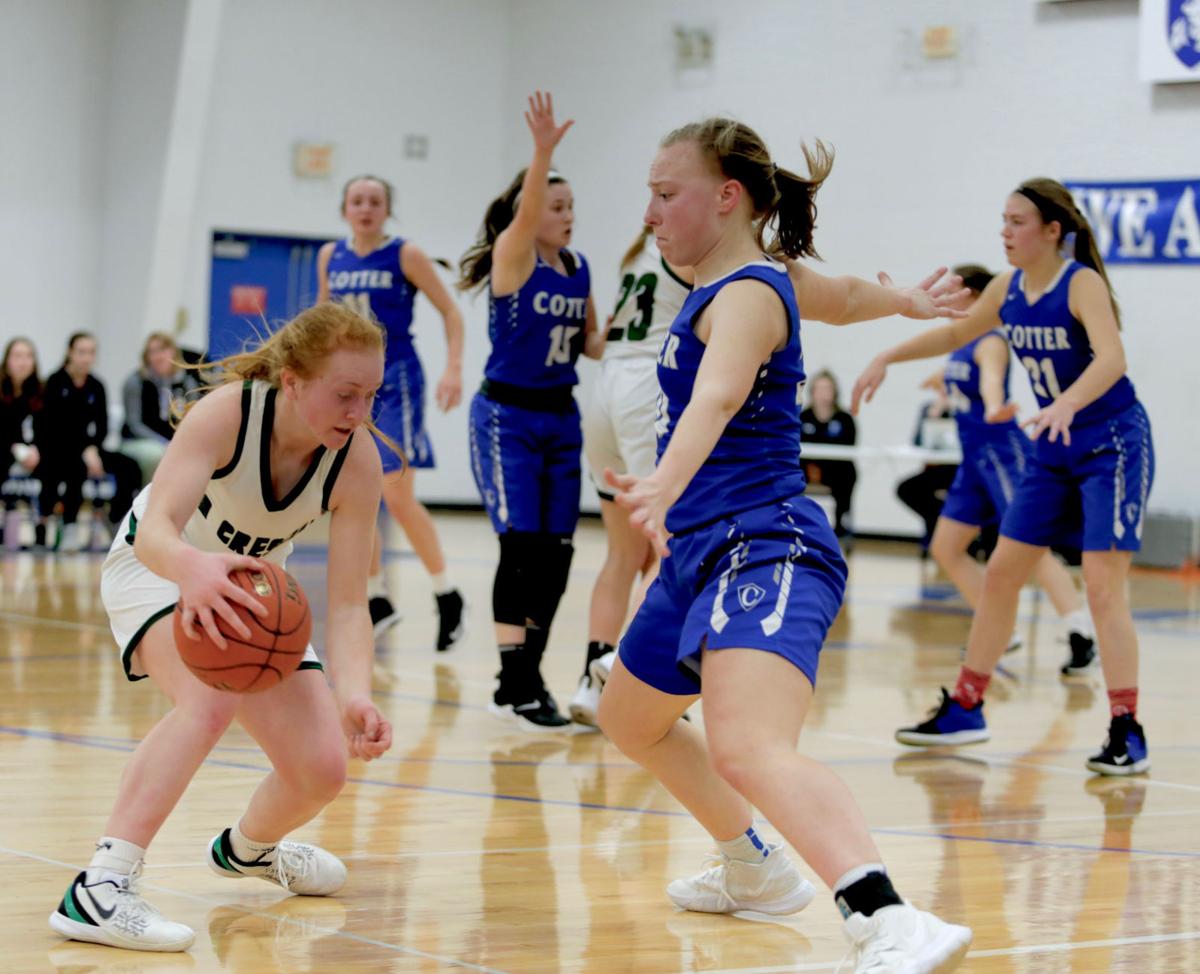 Thanks to some suffocating defense and lethal shooting from beyond the arc, the fourth-seeded Cotter girls basketball team started its postseason march with a dominating 69-37 victory over No. 13 La Crescent-Hokah on Thursday in the opening round of the MSHSL Section 1AA Tournament in front of a good crowd at John Nett Rec Center.

After struggling a bit against Kenyon-Wanamingo in this exact scenario a season ago, the Ramblers (23-3) had zero issues with the Lancers (11-16). Their defense was tenacious, ball movement was crisp and shots were falling. It was an impressive performance from start to finish.

“We were at our best tonight,” coach Pat Bowlin said. “Tremendous ball movement. A lot of wide-open shots because of the extra pass. We did a much better job defensively on No. 13 (Calie Esser). She really hurt us last time. We really bottled her up. Mary (Morgan) in particular, gets most of the credit. It was good team defense as well, but she did a really good job.”

Esser had 12 points and 11 assists last time these two teams met on Friday. Morgan wasn’t about to let that happen again.

She was in the face of Esser every time the La Crescent-Hokah point guard touched the ball, whether that was 90 feet from the basket or 10, Morgan was stuck to Esser like glue. She helped force three 10-second calls in the first half alone and was a key cog for a Ramblers defense that forced more first-half turnovers (20) than points allowed (19).

“Calie is a heck of a player,” Morgan said. “I play her in soccer. She is very fast, just very athletic. I don’t remember what exactly she had last time we played, but it was too many. Every time she passes the ball, the shot goes up. We watched all the clips. So when I was given the opportunity to guard her, I knew I had to shut her down in order for us to be successful.”

Any opportunity for the extra pass, they made, and it led to open 3s throughout the game. They made nine from beyond the arc in the first half, finishing with 10 for the game.

“I have been coaching for over 37 years, and I have never had any team that moves the ball better. Never,” Bowlin said. “It’s just really fun. As a coach you worry about a lot of different things, but I really enjoy watching our team play when we share the ball.”

Sophomore Sofia Sandcork led the way making four 3-pointers to finish with 14 points — all of which came in the first half. Fellow sophomore Megan Morgan scored 11 followed by her sister Mary Morgan and Jordan Rubie, each of whom finished with 10.

The Ramblers led by as many as 38 in the second half.

“Tonight felt really good,” Mary Morgan said. “We haven’t had a game like that. Just having that mentality carries us. I think tonight is what we needed and I think people saw that and hopefully we can just carry it over into Monday. That’s the big hope.”

The Ramblers will take on fifth-seeded Stewartville 7:30 p.m. Monday at the Rochester Mayo Civic Arena. The Tigers handled Kenyon-Wanamingo 75-35 on Thursday.

Cotter won the only matchup against the Tigers 62-46 on Dec. 5 in a game where it recognized and celebrated Bowlin’s 600th-career victory.

“It was a heck of a game here, and the score is a little deceiving,” Bowlin said. “I think we ended up winning by 16, but I think we scored the last 16 points of the game. They are a carbon copy of us. They like to trap everywhere and press. The one thing we over anybody is that we are the best 3-point shooting team in the Section. We have four kids shooting 35% from beyond the arc. That’s really good for high school basketball. ... It should be a great game.”

Twenty years later, Nelson's 66-2 throw remains the shot put school record at Logan and is the top throw in the event among all Coulee Region teams.

Avrie (Walters) Duffy no longer has the desire to run, but there was a time when it was all she wanted to do.

Julie Steinhoff isn’t sure when or where the best girls discus and shot put performances in Coulee Region history took place, but she knows sh…

Event records in throws for every school in the Tribune’s coverage area. Records are reported as submitted by schools:

Event records in throws for every school in the Tribune’s coverage area. Records are reported as submitted by schools: