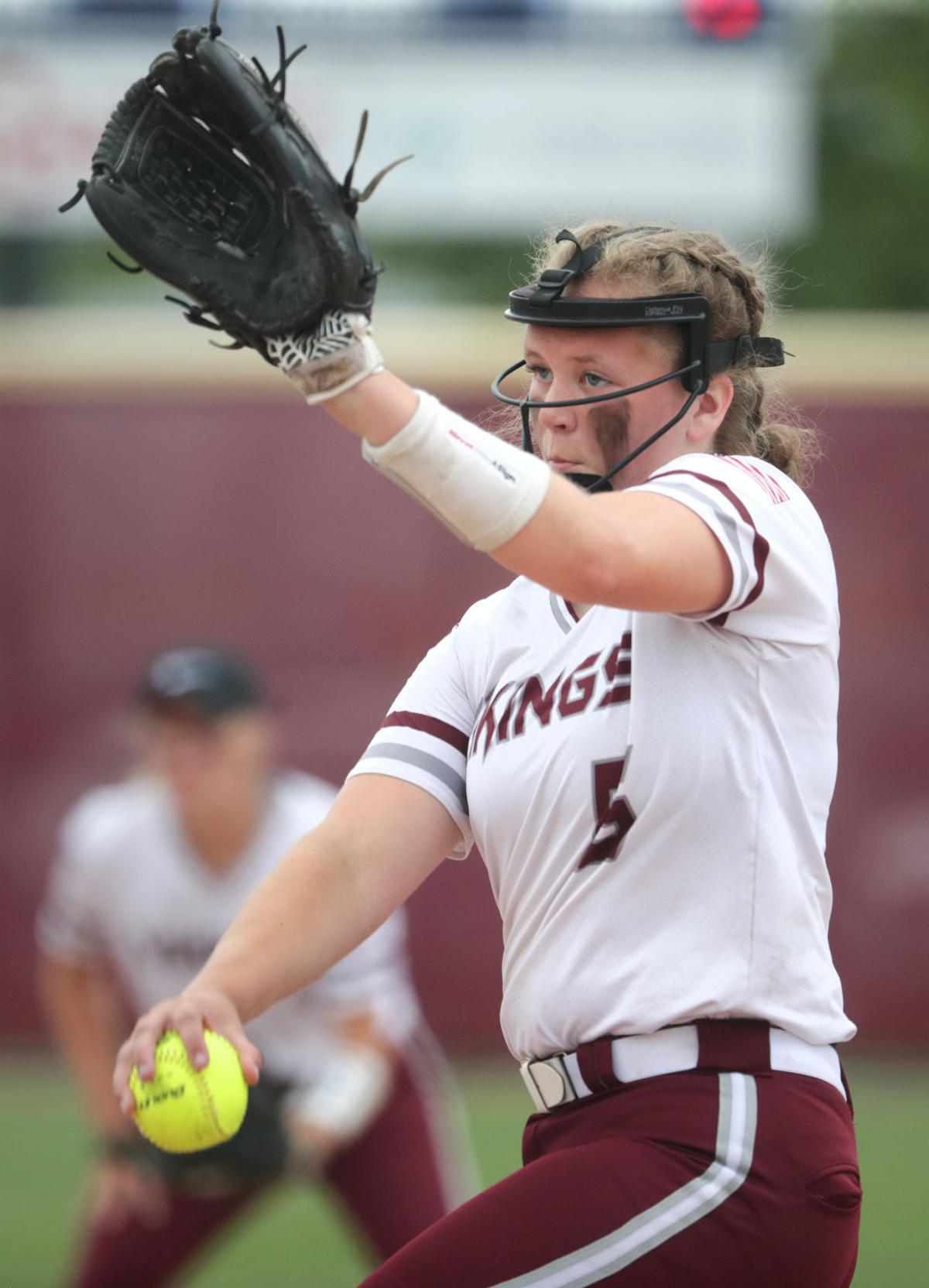 Holmen pitcher Jayda Staige throws in the second inning against Sun Prairie during the WIAA Division 1 sectional championship in Middleton, Wis., on Wednesday. 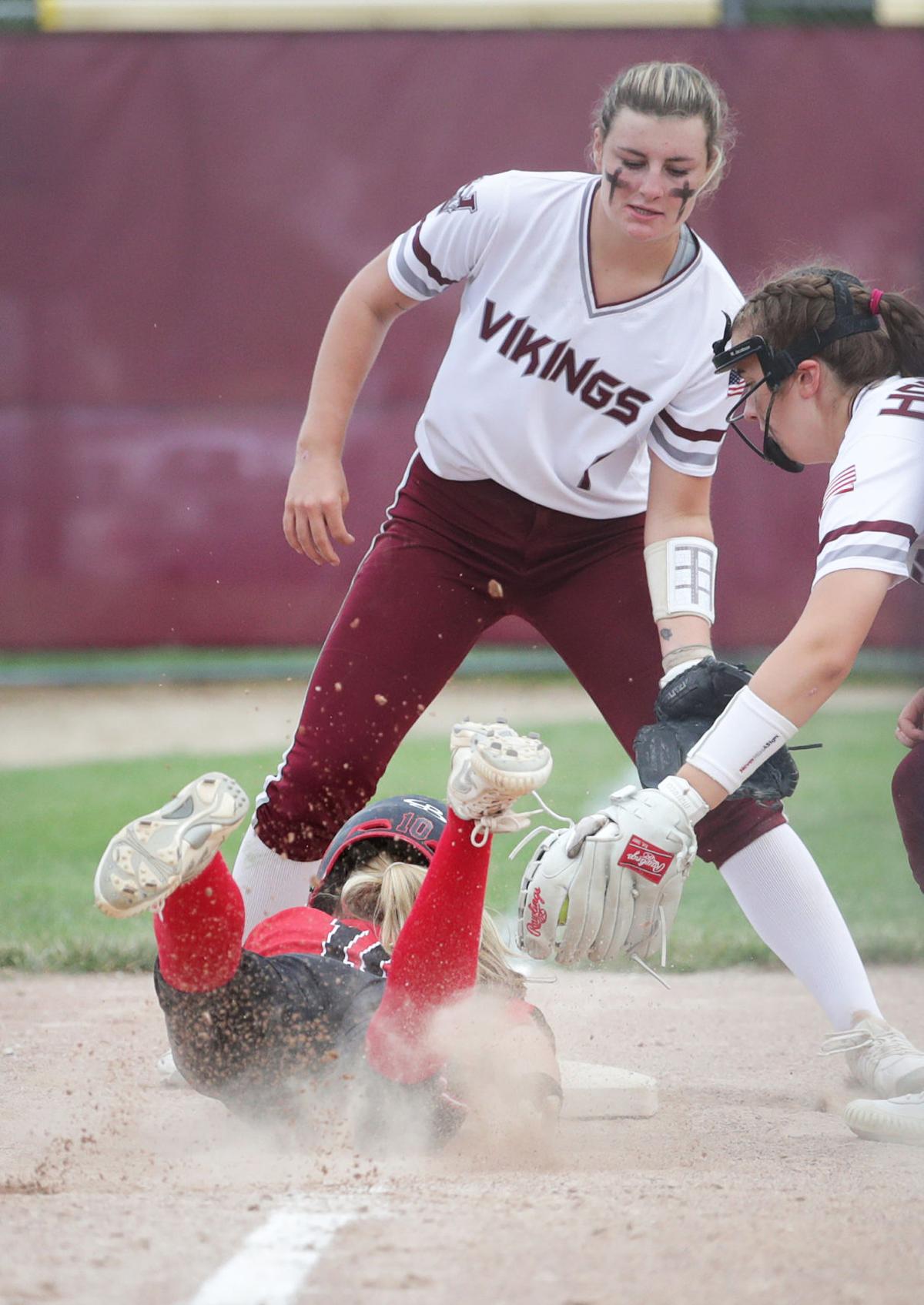 Sun Prairie's Isabel Royle beats the throw back to third as Holmen third baseman Marci Jacobson, right, and shortstop Sydney Jahr try to tag her out during a WIAA Division 1 sectional final in Middleton, Wis., on Wednesday.

MIDDLETON, Wis. -- The Sun Prairie softball team spent the first two weeks of the season putting the pieces together.

When everything fell into place, Sun Prairie got on a roll.

And that carried the Cardinals all the way to another trip to the WIAA Division 1 state tournament.

Ninth-ranked Sun Prairie scored 11 runs in the third inning, which wrapped up a 15-0 three-inning, run-rule victory over Holmen in a Division 1 sectional championship game Wednesday night at Firefighters Memorial Park in Middleton.

“It means everything,” Cardinals senior third baseman Ellie Rademacher said. “This program has become so much to me, and it really is like a family. So, I’m excited to be going back.”

“The end goal was in sight and I wanted to do it for the people I was playing with,” said Rademacher, who drove in the game’s first run in the first inning with a double into the left-field corner. “I didn’t want to be done here.”

The Cardinals, who pounded out 13 hits and capitalized on five errors and six walks by third-seeded Holmen (20-8), won their 17th consecutive game. Sun Prairie advanced to the Division 1 state tournament for the fourth consecutive time (the 2020 spring season was canceled due to the COVID 19 pandemic).

“The biggest thing is we studied,” Sun Prairie coach Jamie Olson said. “We studied our opponents. The girls wanted to do whatever it took to get back to state. They’ve been working hard and it showed tonight.”

Sun Prairie scored one run in the bottom of the first inning and three more times in the second, before the Cardinals erupted for 11 runs on nine hits and four Holmen errors in the third.

The Cardinals had a 4-3 record after defeating Waunakee and falling to Oak Creek in a May 8 tournament in Sun Prairie. The Cardinals haven’t lost since.

Sun Prairie, which shared the Big Eight Conference title with Verona, advanced to the sectional final with a 3-2, eight-inning victory over Verona in the sectional semifinal Monday.

“Beating Verona, I’m not going to lie, that should have been the state game,” Olson said. “Both teams fought to the end. The girls exhausted every ounce of energy that they could playing that game Monday. So, going into this game, the girls were a little more relaxed than I was anticipating. But they knew they wanted to get it done.”

Sun Prairie, which will make its seventh state appearance, advanced to state in 2017-19 — winning the state title in 2018 and finishing second in 2019.

“The Big Eight is a tough conference,” Olson said. “We go out to win. Every game that we play is a stepping stone to where we want to be.”

Holmen, which has made two state appearances, most recently reached state in 1999 when the Vikings won the state title.

“Sun Prairie is a great team,” Holmen coach Ryan Miller said. “You have to give credit where credit is due. They played well on both sides of the ball. As for us, we came out flat. We didn’t play to our potential. We had some defensive errors that were costly that extended innings. Things snowballed and we didn’t stop it quickly enough and the game ended early.”

Holmen, which finished second behind Mississippi Valley Conference champion Tomah, advanced behind junior pitcher Jayda Staige in a 3-0 victory over DeForest in the sectional semifinal.

On Wednesday, Vikings junior Ellie Kline’s single in the third inning was the only hit off Baker.

“We played really well leading up to today,” Miller said. “We’ve been solid through the playoffs, in the first three games we had.

“I knew if we played our game, we would have a shot and a chance at a good outcome. But we didn’t play our game today. We had too many errors and we didn’t string together good at-bats. Again, Sun Prairie is a good team. You have to give credit where credit is due. They came out and thumped us.”

Holmen pitcher Jayda Staige throws in the second inning against Sun Prairie during the WIAA Division 1 sectional championship in Middleton, Wis., on Wednesday.

Sun Prairie's Isabel Royle beats the throw back to third as Holmen third baseman Marci Jacobson, right, and shortstop Sydney Jahr try to tag her out during a WIAA Division 1 sectional final in Middleton, Wis., on Wednesday.