Caleb Miedema and Cade Amborn walked to the back side of the track with medals dangling from around their necks to cheer on Bangor High School classmates who were running the 800-meter relay.

A couple of minutes later, Ashlie Lockington crossed the finish line first to give the Cardinals another Division 3 victory at the WIAA state track and field meet.

It was a great day to be a Cardinal at the Veterans Memorial Field Sports Complex.

Bangor won three individual and relay championships, medaled in many more and combined to score 73 points while both finishing in the top six teams during the two-day competition.

“I think this is great for Bangor and builds on what we were able to do in football and both basketball seasons,” said Lockington, who won the triple jump and ran the anchor leg for the winning 800 relay and second-place 400 relay. “I’m proud of what we were all able to do.”

The Cardinals combined to qualify in 13 events and won medals in 10 of them as the boys placed third with 43 points and the girls sixth with 30.

Highlights were easy to find:

Lockington and her teammates on the 800 relay team may have given the Cardinals their signature moment by winning the race in 1 minute, 47.56 seconds after Lockington chased down a Wild Rose runner for the victory.

It set off a celebration for all of the runners and gave them momentum moving forward on a day that included three finals.

“That was such a good start to the day,” Hundt said.”We’re confident in our 4-by-2(00), and we have four girls with a really good bond, and we all love track.

“I can say it’s my favorite, and I think they would all say that, too.”

Bangor didn’t beat its season-best run of 1:47.09, but it positioned the anchor to win the race.

“I really like chasing down other girls when they are out in front,” Lockington said. “I like to know where I’m at, and when I’m in front, I’m not sure where the other girls are.

“It helped me to be able to go chase her.”

She said the runner-up finish and time of 50.99 was also good for the Cardinals, but that fatigue may have set in for the final event and miss of the podium.

The triple jump was a welcomed victory for Lockington, who won the event as a freshman and placed second as a sophomore. She jumped 37 feet, 10 inches to win the event by 5¾ inches.

“It felt so good to get back on top of the podium in that after last year,” she said. “When you get here, it just takes one big jump to put yourself (in contention), and I got that on my second jump.

“It felt good, and I had a big smile on my face after I hit that big one. Coach (Kevin Kravik) was going crazy, and the fans were yelling. Everyone knew that was a good one, and I could relax a little after that.”

Miedema couldn’t relax much while winning the high jump, partially because Amborn pushed him so hard. They both cleared 6-4 at the sectional and on Saturday, but Miedema won with the advantage of fewer missed attempts.

“In the middle of the event, we’re competitors, but we’re still friends,” Miedema said. “We try to cheer each other on and put a show on for our fans. Our coach tells us to have fun while we compete, and that’s what we try to do.

“We try to help each other when we can because we’re trying to get the best out of each other.”

Todd Sommerfeldt can be reached at todd.sommerfeldt@lee.net or on Twitter @sommerfeldtlax 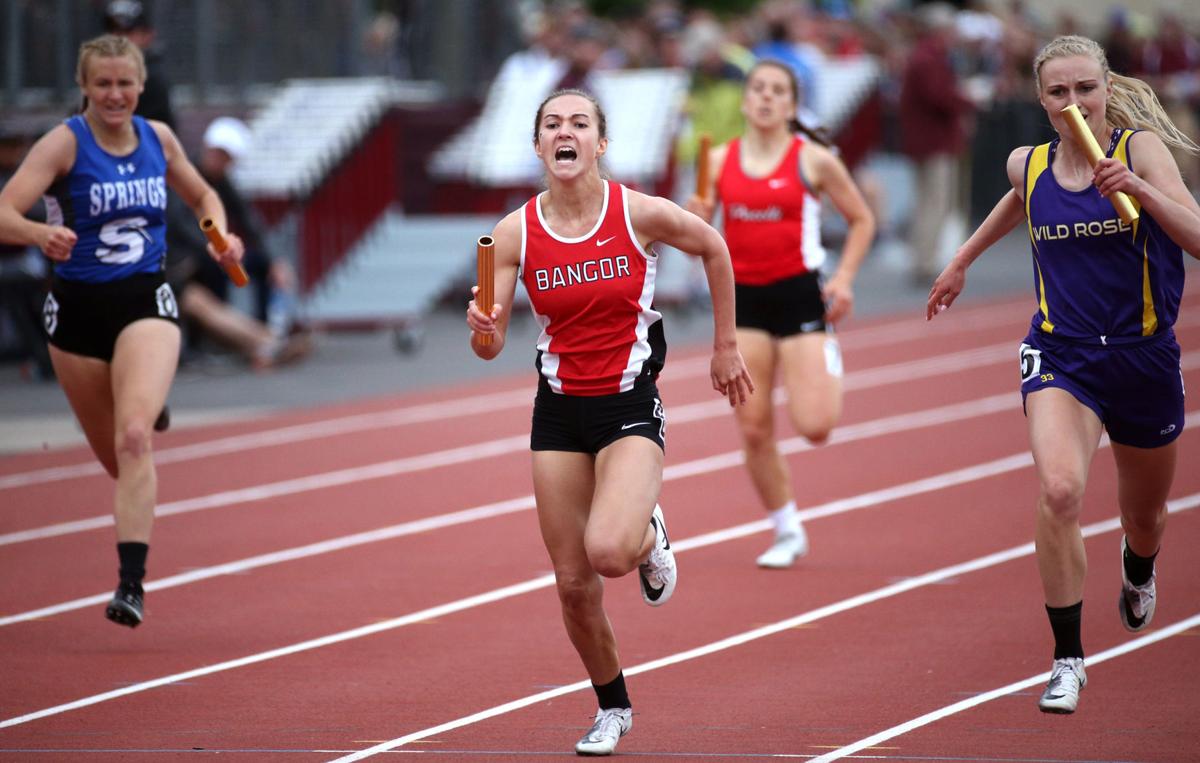 Bangor’s Ashlie Lockington, center, comes across the finish line first in the Division 3 800-meter relay Saturday at the WIAA state track and field meet at UW-La Crosse. Bangor won the event in 1:47.56. 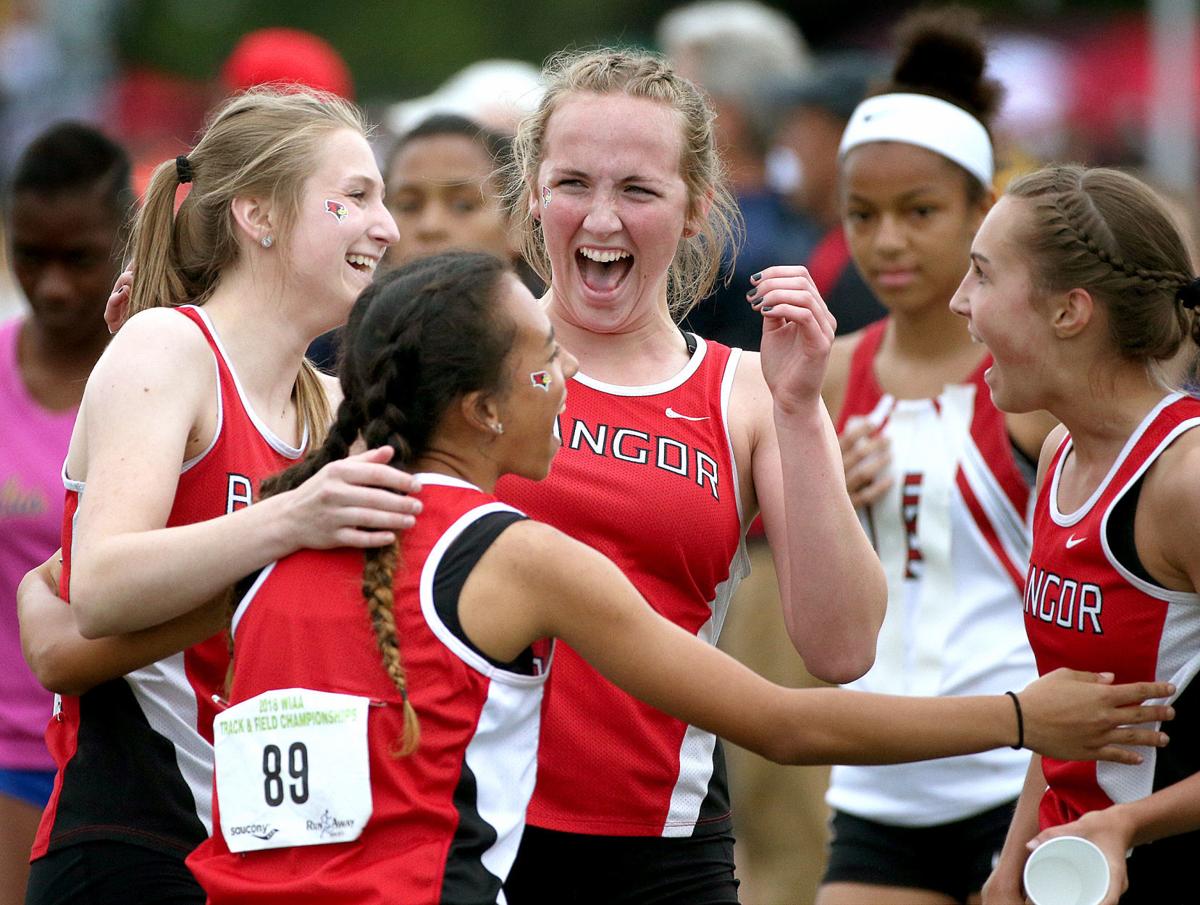 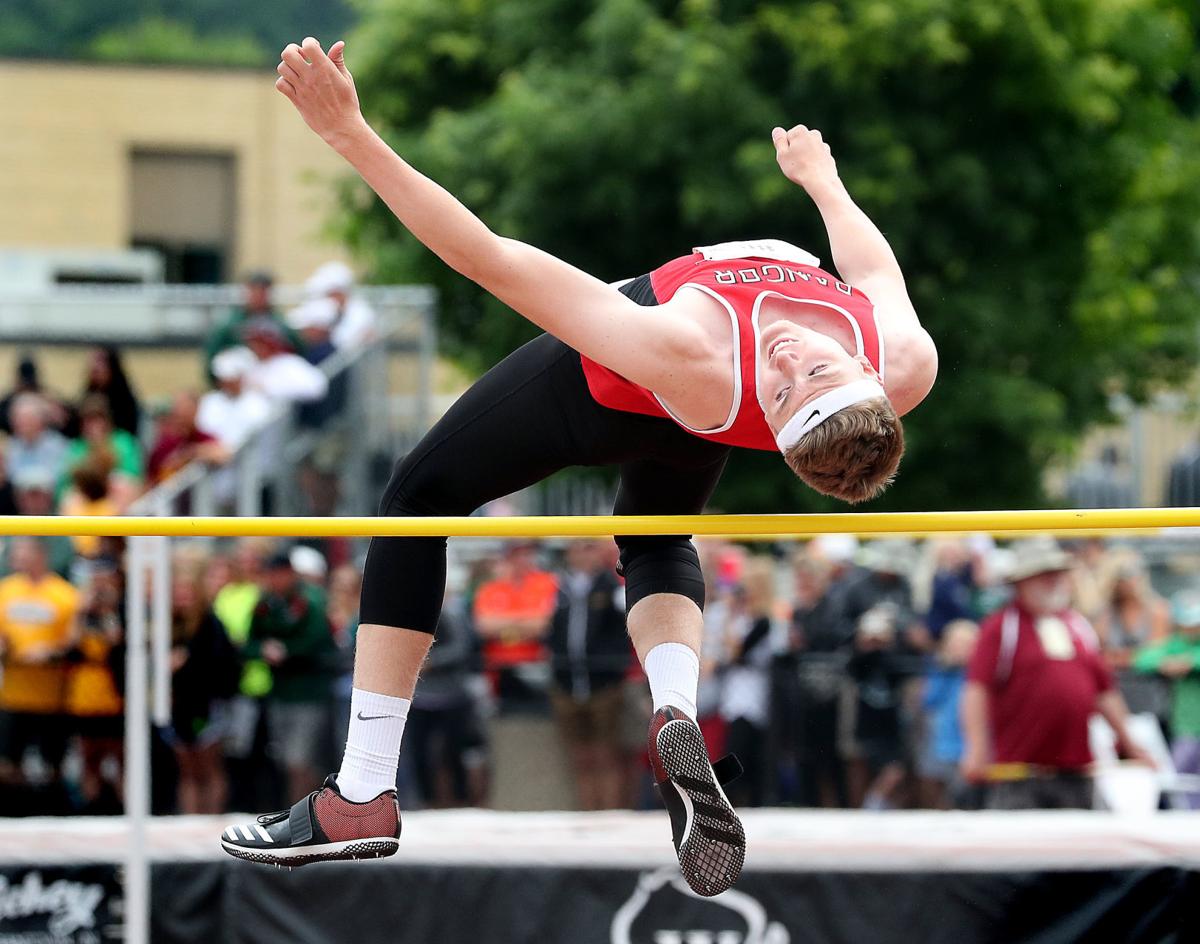