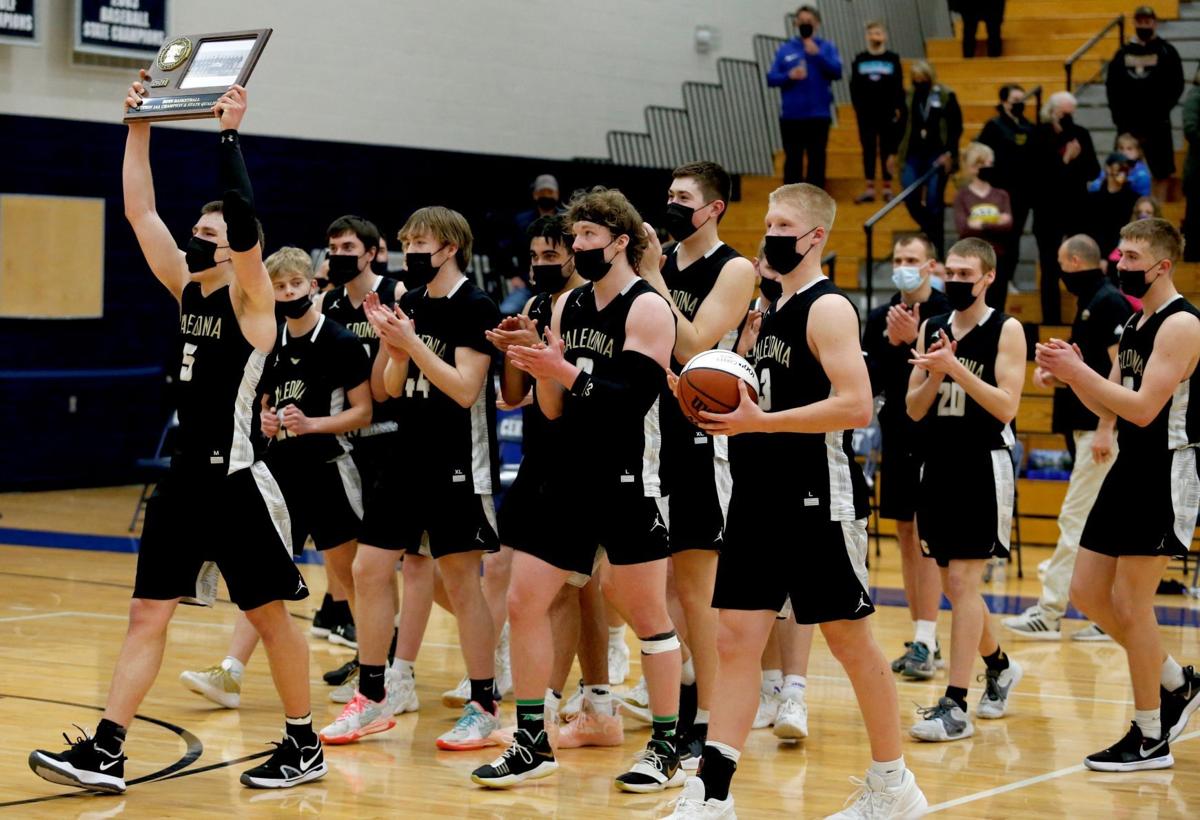 Caledonia's Andrew Kunelius raises the MSHSL Section 1AA championship trophy over his head as he and the rest of the Warriors walk toward the Caledonia student section to celebrate their 78-61 win over the Stewartville Tigers on Wednesday at Rochester Century. 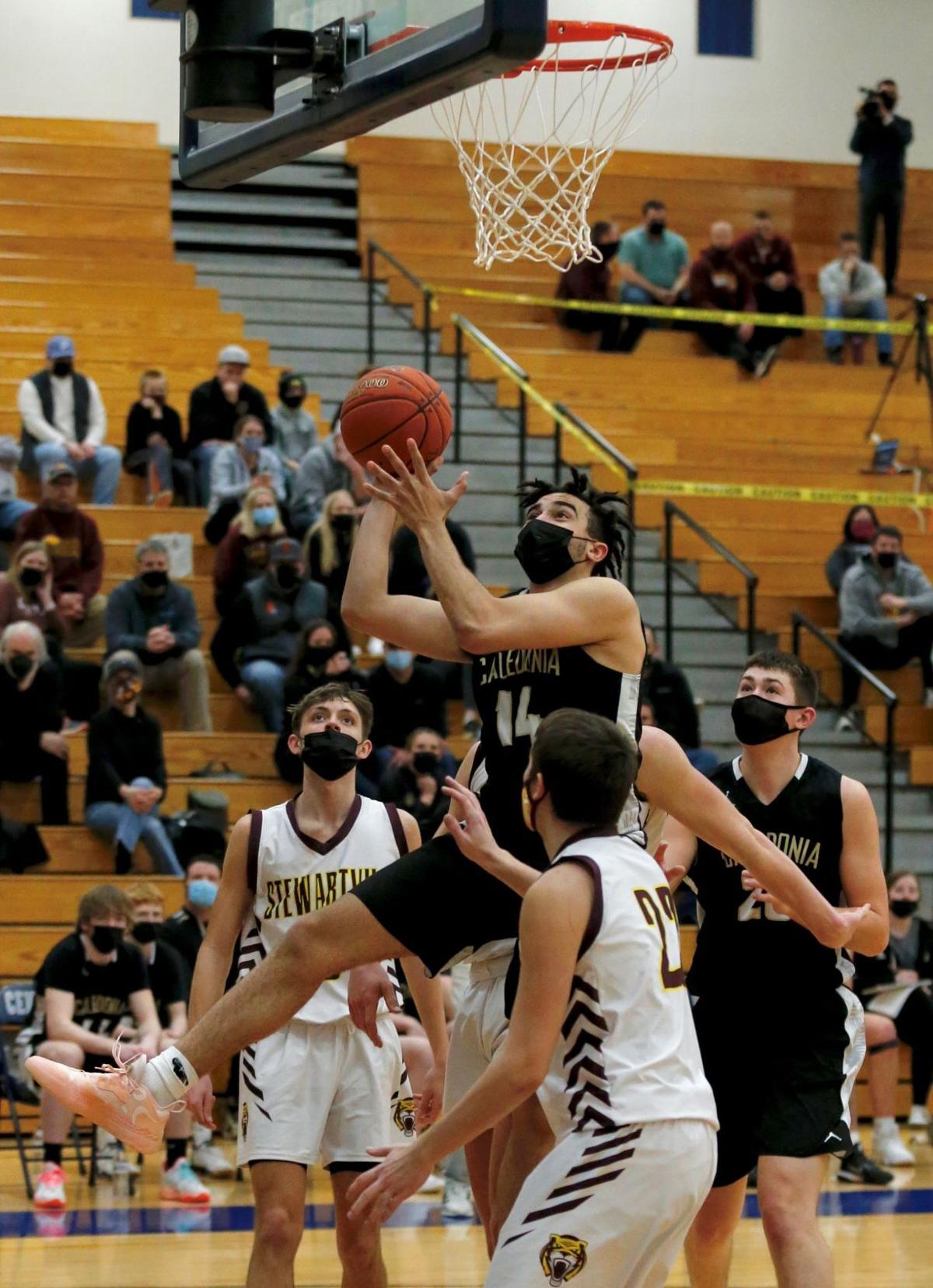 Caledonia's Ja'Shon Simpson (14) floats through the lane for a layup against Stewartville during Wednesday's MSHSL Section 1AA championship game at Rochester Century.

JOE MELLENBRUCH For the Tribune

ROCHESTER, Minn. — The third-ranked Caledonia High School boys basketball team knew what it had to do.

And while Tschetter’s quiet 29 points led all scorers, the Warriors made him work for every one of them en route to a comfortable 78-61 win at Rochester Century.

Junior guard Jackson Koepke was one of three Caledonia scorers in double figures with a team-high 22 points, 18 of which came from behind the 3-point arc. Senior guard Austin Klug — who missed Caledonia’s first game against the Tigers this season due to injury — scored 17 of his 19 points in the first half, while senior Casey Schultz poured in 12.

Besides Tschetter, no other Stewartville scorer finished with more than 10.

“We didn’t want him to get the ball,” said Schultz, who was tasked with guarding Tschetter for much of the night. “We wanted to deny him as much as possible and try to make their role players beat us.”

“I thought we did a fantastic job on him,” said Caledonia coach Brad King, whose team won for the 100th time and become a three-time state qualifier during his four seasons. “We were giving great backside help. It’s really hard to force the ball in there (to Schetter) when backside help is two feet away. It was an impressive effort by the guys.”

Tschetter was swarmed by Warriors (21-1) all night, and his teammates struggled to make up the difference. Senior guard Nolan Steir chipped in 10 points for the Tigers (18-4), but half of those came in the dying moments of the contest.

“They’ve got enough athletes and size and speed to make up for any defensive mistakes,” Stewartville coach Adam Girtman said. “We needed a couple other guys to step up and hit some shots. We didn’t shoot the best tonight, but the effort was there. We just didn’t put the ball in the hoop enough, and they did.

“You get 36 minutes to prove that you’re the better team, and Caledonia did that to us today.”

Both sides traded blows in the first six minutes of the game, as Stewartville (18-4) stayed within two points of the Warriors at 13-11. But a 13-2 run then brought Caledonia’s lead into double digits, where it stayed for the remainder of the game.

The Tigers endured three separate scoring droughts of at least three minutes, including a 3:07 stretch to start the second half where the Warriors stretched to a 20-point lead with a 9-0 run.

“We needed to execute,” said King, whose team has won 19 straight games since a nonconference loss at Onalaska. “I told them (at halftime), ‘We won the first half. Now we have to win the second half.’ We had a few things that we were saving to run, we ran them, and the guys executed them to a T.”

Following a timeout, the Tigers eventually closed their second-half deficit to as little as 15 points after back-to-back Tschetter buckets. Girtman then elected to turn up the pressure on Caledonia in an effort to close the gap further, but that press — an admitted risk against the Warriors’ high-octane attack — backfired, as Caledonia reeled off a 14-3 run to put the game away.

“If somebody has to press us, we really like that,” said King, whose Warriors beat the Tigers 72-60 during the regular season. “Our whole philosophy is, make them pay if they press. If someone presses us, we’re going to make them pay, so we’re going to get the easiest basket we can, as fast as we can.”

“Once we got down 20, it became, ‘Well, do we press and potentially go down 40, which is how it was looking at one point, or try to hunker down in the half court?’” Girtman said. “A better start in the second half would have been nice; get a couple shots here and there, they miss a couple. But it didn’t go that way.”

Caledonia's Andrew Kunelius raises the MSHSL Section 1AA championship trophy over his head as he and the rest of the Warriors walk toward the Caledonia student section to celebrate their 78-61 win over the Stewartville Tigers on Wednesday at Rochester Century.

Caledonia's Ja'Shon Simpson (14) floats through the lane for a layup against Stewartville during Wednesday's MSHSL Section 1AA championship game at Rochester Century.