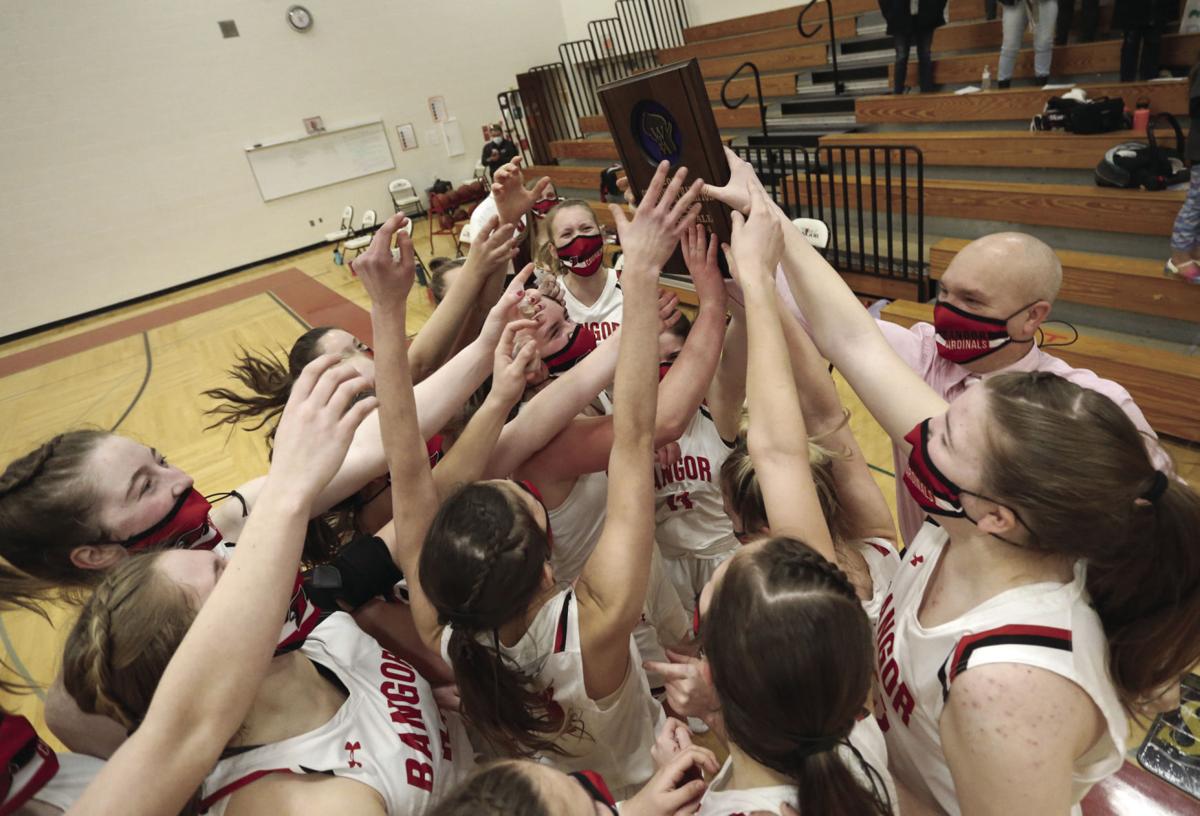 Bangor High School girls basketball coach Merlin Jones hands the WIAA Division 4 sectional championship plaque to his team following its 67-55 win over Auburndale Saturday afternoon in Bangor. The Cardinals are state qualifiers for the fourth time in five seasons and second year in a row. 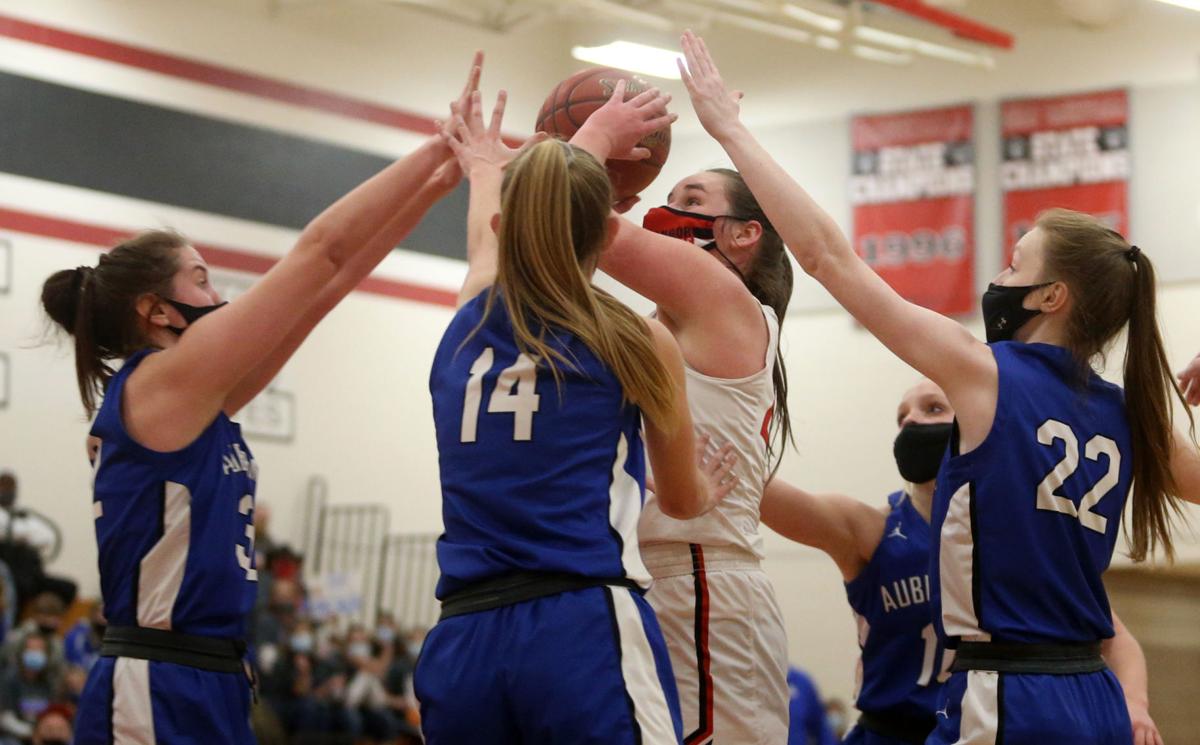 Bangor's Nora Tucker tries to put up a shot while drawing the attention of four Auburndale defenders during the second half of Saturday's WIAA Division 4 sectional final in Bangor. The Cardinals won 67-55 to advance to the state tournament for the fourth time in five seasons.

BANGOR — After little went the right way in the latter portion of the first half, the Bangor High School girls basketball team needed a boost out of the locker room.

Andrea Olson was there to provide one off the bench.

The senior guard finished in the lane, knocked down a 3-pointer from the left wing and blocked a shot on the other end. Olson then hit a jumper from near the free-throw line and had a layup in transition.

Her nine-point burst capped 12 straight from the top-seeded Cardinals to start the second half, which turned a one-point deficit into an 11-point advantage and gave the team the energy it needed to earn a 67-55 win in its WIAA Division 4 sectional final against third-seeded Auburndale on Saturday afternoon.

The victory gives Bangor, which was ranked third in the state in the final Associated Press poll, its second straight trip to the state tournament and fourth in five years. The Cardinals qualified in Division 5 a season ago, though they were unable to play a game in Green Bay because of the COVID-19 pandemic.

“This year we’re going to get our redemption. I know we are,” Olson said. “... I feel like — I don’t know — this is still the same season as last season. We weren’t going anywhere but state.”

Sophomore guard Nora Tucker made five 3-pointers and scored a game-high 20 points to pace Bangor, while senior Haley Jones added 16. Olson finished with 11 points, nine of which came in that 2-minute, 13-second stretch early in the second half.

“Andrea has really stepped up,” Tucker said. “... She was coming alive. She did great. That really boosts our energy.”

Tucker buried a 3 from the left wing, and Jones scored inside off a baseline out-of-bounds play. Auburndale sophomore Annamarie Aue put back an offensive rebound to answer, but Jones scored on back-to-back possessions to push Bangor’s lead to 46-33 with 10:03 to play.

Tucker, who had 14 points in the second half, made two more triples when the Eagles got back within single digits, the latter of which gave the Cardinals a 56-44 advantage with 4:40 to go.

“She’s just a sophomore, but even last year — when she gets the ball, it’s probably going in,” Jones said of Tucker. “And we’ll throw it to her all the time.”

That last Tucker 3, though, was Bangor’s final field goal of the game.

A quick six points brought Auburndale within 56-50 with 3:14 left, but the Cardinals took care of the ball and made 11 free throws down the stretch to seal the win. In all, Bangor made 20 of its 26 free-throw attempts.

“We work on it over and over and over,” Cardinals coach Merlin Jones said. “We’ve got a few drills that we do, and all season I’ve emphasized the fact that free throws win ball games.”

Defensively in the second half, Bangor clamped down the Eagles’ Georgi Schmutzer. The senior made four 3s and had 15 points in the first half but had only two points after the break despite Haley Jones, junior Taylor Jacobson and senior Megan Miedema getting into foul trouble.

“We gave her that opportunity; she got in a rhythm,” Merlin Jones said. “Second half, we were able to kind of make a couple adjustments. A little foul trouble, but girls came off the bench, and we keyed off of her and said, ‘She can’t beat us. We’ve got to make other girls play.’”

But in the first half, Schmutzer helped erase the Cardinals’ early lead.

Bangor went up 16-4 with 8:30 left in the first half, but Schmutzer scored the game’s next six points. Schmutzer hit her third triple of the game with 3:34 left in the half to tie things at 18, and another one gave Auburndale a 26-20 lead with 1:08 on the clock.

“They countered, had their run, and the biggest thing is to respond back to that because they’re a good team,” Jones said. “Anybody you play right now, you know a run is going to happen, it’s a matter of what can you do after it.”

Haley Jones made a jumper and Tucker connected on a 3 from the left corner to bring Bangor within 26-25 at the break before the Cardinals retook the lead early in the second half.

Bangor now turns its attention to the state tournament, and the Cardinals will have a short trip with Division 4 being played at the La Crosse Center. Semifinal games are scheduled for 9:05 a.m. and 12:25 p.m. Friday, with the championship following at 6:35 p.m. Friday.

“I just don’t have words,” Tucker said. “It’s crazy because I love these girls. It’s nice because last year we didn’t get to play and now we can get back there and hopefully get the win.”

“We’ve got to have energy on and off the court, whether it’s on the bench or in the game,” Olson added.

If Saturday was any indicator, Olson will certainly provide plenty of that next weekend.

20: Made free throws for the Cardinals, including 11 in the game's final minutes

12: Consecutive points from Bangor to start the second half

2: Straight sectional championships for the Cardinals (19-2)

UP NEXT: The WIAA will seed teams in each division on Sunday. The Division 4 state tournament takes place with both semifinal and championship games on Friday at the La Crosse Center.

Bangor High School girls basketball coach Merlin Jones hands the WIAA Division 4 sectional championship plaque to his team following its 67-55 win over Auburndale Saturday afternoon in Bangor. The Cardinals are state qualifiers for the fourth time in five seasons and second year in a row.

Bangor's Nora Tucker tries to put up a shot while drawing the attention of four Auburndale defenders during the second half of Saturday's WIAA Division 4 sectional final in Bangor. The Cardinals won 67-55 to advance to the state tournament for the fourth time in five seasons.