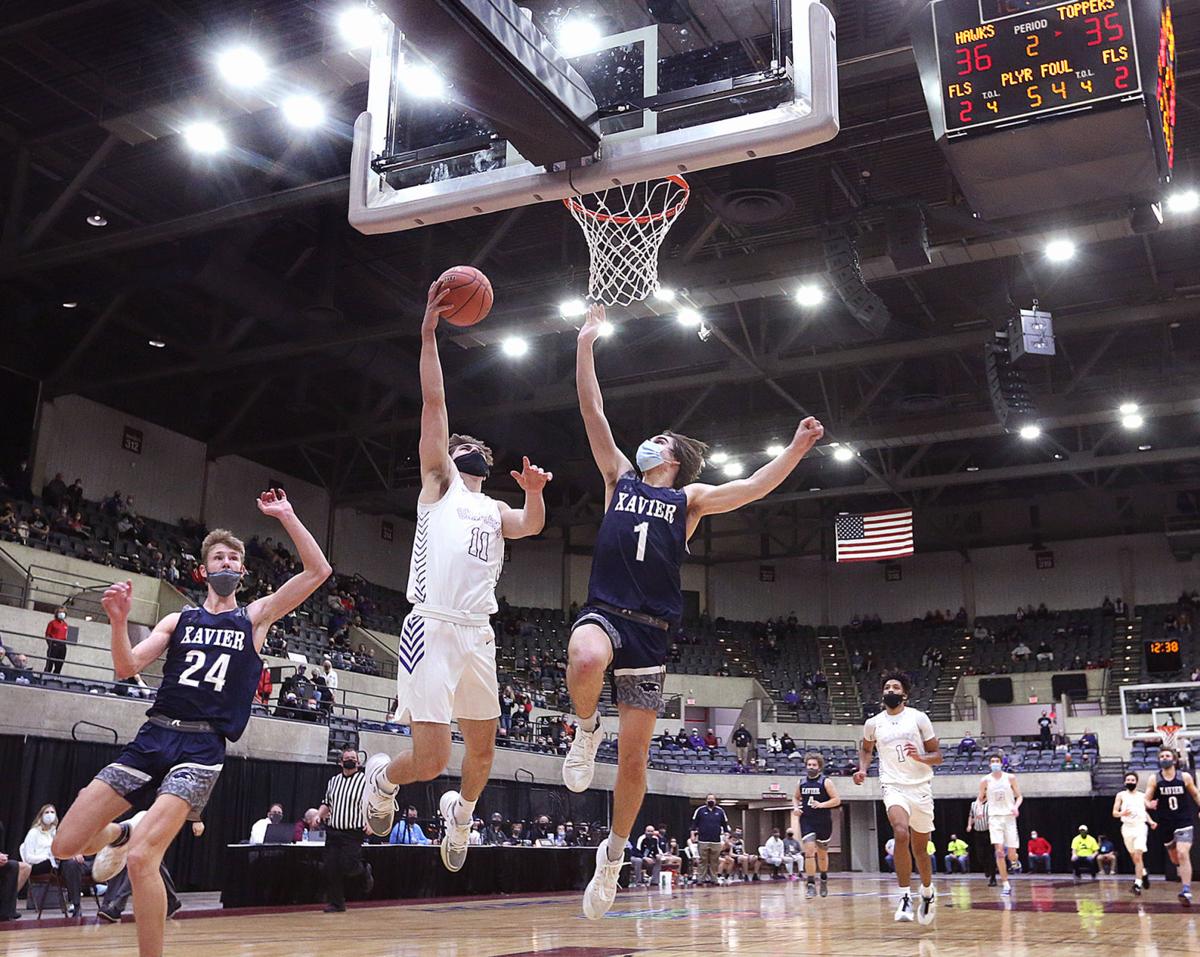 Onalska's Michael Skemp goes to the hoop after making a steal during the second half of Saturday's WIAA Division 4 state semifinal against Appleton Xavier at the La Crosse Center. The Hilltoppers won 66-57.

Michael Skemp was using his time wisely because his opportunity was going to come.

The Onalaska High School junior played sparingly during the first half of a WIAA Division 2 state boys basketball semifinal against Appleton Xavier on Friday morning, but he watched the action closely from his chair next to the La Crosse Center floor.

He studied what was going wrong and what he would need to do when called upon during the second half. He knew his defensive matchup was Charlie Pfefferle, who scored 15 first-half points to help the fourth-seeded Hawks go to the second half tied with the top-seeded Hilltoppers.

“When we were tied at halftime, I knew our team needed a boost,” Skemp said. “I knew if I get give us that boost that we could win this game. You always have to be prepared as a high school player, and I was.”

And while arguments can be made about where the specific turning point came for the Hilltoppers in a 66-57 victory, one on Skemp’s behalf is compelling.

He entered the game with 13 minutes, 8 seconds remaining, his team facing a 36-35 deficit, and the Hawks possessing the ball.

That possession ended in a Skemp steal and breakaway. He didn’t make the shot, but teammate Victor Desmond was there for the follow to make sure the turnover became points.

Skemp scored on Onalaska’s next possession and made another shot at the 10:25 mark to give his team a 41-36 lead. He also sunk his teeth into Pfefferle and held him scoreless for more than 4 minutes as the Hilltoppers gave themselves some breathing room.

“He had a couple of stops defensively and then got a couple of buckets going to the rim for us,” Onalaska coach Craig Kowal said of Skemp, who played 12 minutes in the second half and had four points, two assists, one rebound and one steal. “That kind of changed the whole dynamic of the game.

“Obviously, we had Evan (Gamoke) hit those shots after that, which was huge as well, but I thought Michael Skemp coming in and doing the job he did was absolutely fantastic and a game-changer.”

Gamoke made two straight 3-pointers after Xavier charged back to tie the game at 41, and the first — both came from the left corner — was set up by a pass from Skemp.

“He came in, he locked people up, he made plays,” senior Gavin McGrath said of Skemp. “That helped us out a lot because that’s what we needed.”

All of that came during a rare instance of Onalaska having to overcome itself to win.

The Hilltoppers (19-0), who advanced to a Saturday night championship game against Pewaukee (26-3), struggled as Xavier was able to push tempo more than Onalaska desired in the first half.

The Hilltoppers, who might average 10 turnovers per game, turned the ball over 10 times in the first half. That allowed the Hawks, who average 75 points per game, to push the ball up the floor and play the way it prefers.

“They got up into us a little more than I thought they would,” Kowal said of the Hawks. “They were more aggressive on our guards that I thought. We had to make a couple minor adjustments at halftime, and that helped take away that pressure.”

While the Hilltoppers did right the ship as far as the role turnovers — they had three in the second half — played, fouls became an issue.

Senior point guard Sam Kick picked up his fourth foul to trigger Skemp’s entrance. He returned after sitting for five minutes but fouled out with 2:12 left, but that followed a 7-0 run — Gamoke buried another 3 — that gave Onalaska a 56-46 lead.

So the Hilltoppers faced some rare adversity Saturday morning and found a way to overcome it.

It certainly helped Onalaska to have the consistency provided by McGrath (18 points, six rebounds) and Desmond (17 points, nine rebounds), but Skemp’s role in the big picture can’t be overlooked.

“I think he was the main reason we won that game,” Gamoke said of Skemp. “He did a lot for us.”

Onalska's Michael Skemp goes to the hoop after making a steal during the second half of Saturday's WIAA Division 4 state semifinal against Appleton Xavier at the La Crosse Center. The Hilltoppers won 66-57.