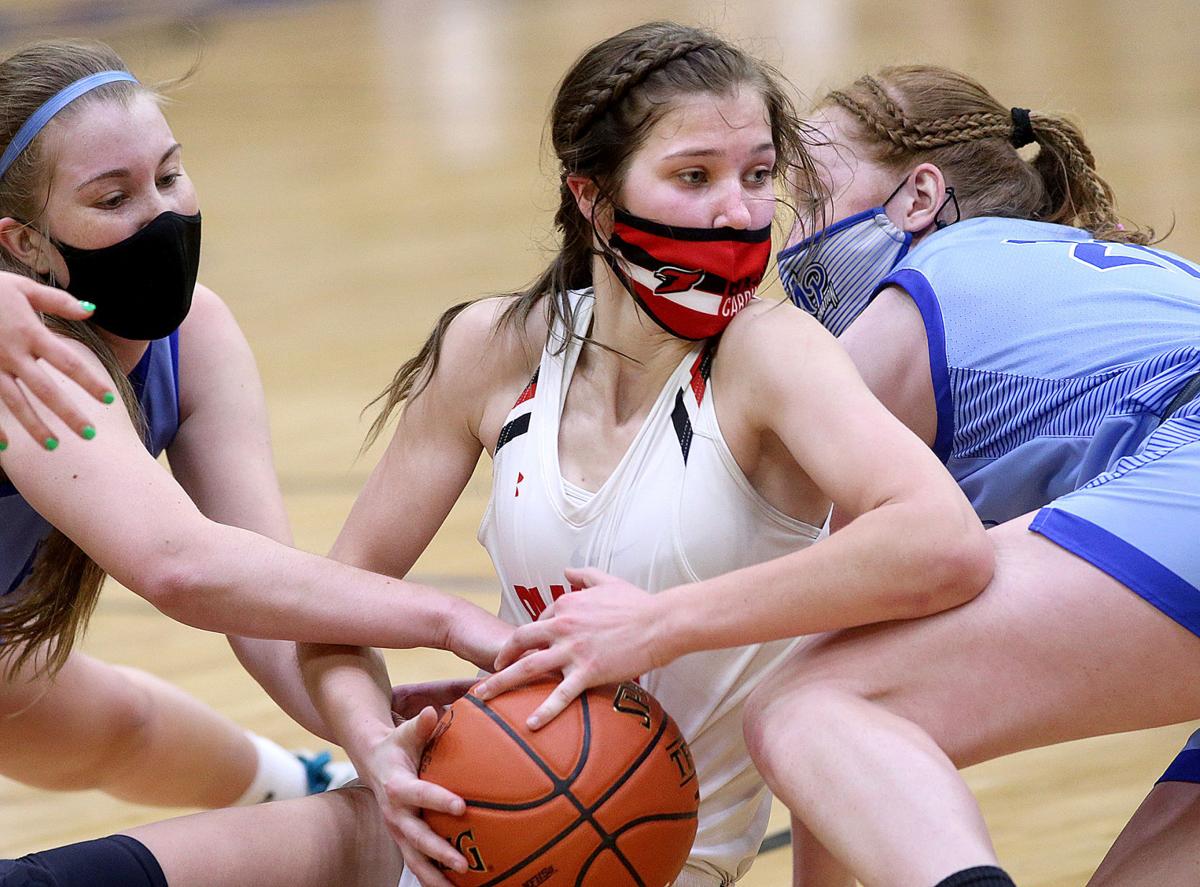 Bangor's Haley Jones, center, fights for the ball during a WIAA Division 4 state semifinal against Mineral Point at the La Crosse Center on Friday. The third-seeded Pointers beat the second-seeded Cardinals 66-30. 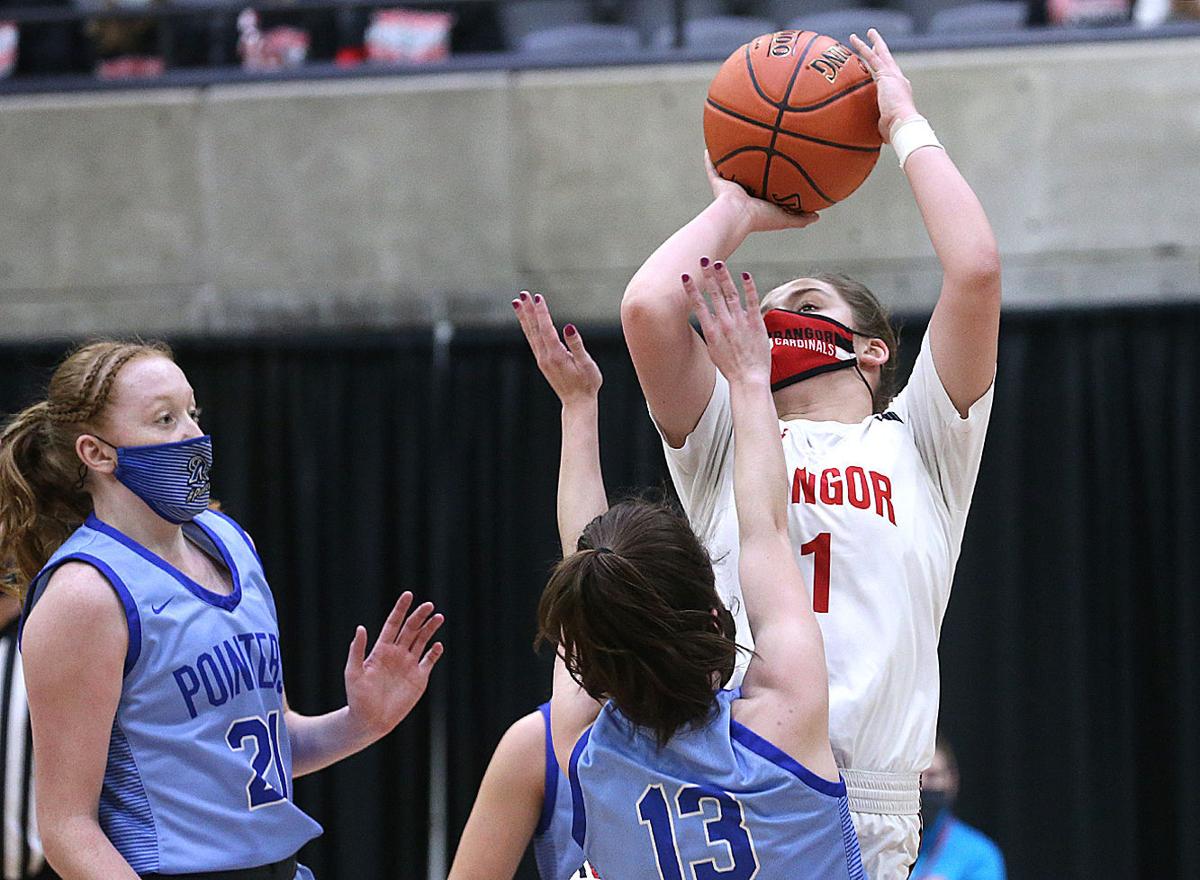 The play may have epitomized the Bangor High School girls basketball team’s Friday afternoon at the La Crosse Center.

The Cardinals had their hands full with Mineral Point and were struggling mightily in a WIAA Division 4 semifinal when Megan Miedema made a nice pass to a wide open Taylor Jacobson late in the first half.

Jacobson made the shot — her team’s first in more than 11 minutes of game time — to allow for a deep breath.

But the Pointers fired the ball down the court immediately. Emily Cody caught in in the left corner and drained a 3-pointer to erase what the Cardinals had worked so long and hard for.

Even when the Cardinals (19-3) did something well on Friday, they seemed to lose ground.

Third-seeded Mineral Point made 13 3-pointers — seven in the first half — and pulled away from the second-seeded Cardinals for good early on the way to a 66-30 victory that ended Bangor’s season.

“When a team comes in and shoots like that, obviously, it’s hard to recover,” Bangor coach Merlin Jones said. “They kept hitting shots left and right on us.”

The Pointers (17-5) advanced to a 6:35 p.m. championship game against Mishicot (19-2), which beat fourth-seeded Fall Creek in the other semifinal. That game began after the Tribune’s print deadline.

The Pointers dictated pace with full-court pressure defense and never let the Cardinals get into anything that resembled a rhythm.

Senior Megan Miedema made her first two shots and gave Bangor a 5-4 lead in the opening minutes, but things quickly fell apart. The Cardinals missed their next 12 shots as the Pointers seized control.

Jacobson’s basket came 11 minutes, 25 seconds after Miedema’s second field goal and cut Mineral Point’s lead to 24-11. Cody’s 3 at the other end was followed by a 3 from teammate Mallory Lindsey, who gave the Pointers a 30-13 halftime lead.

Bangor turned the ball over seven times in the first half, and the Pointers turned those into 11 points. The defensive pressure made Bangor spend most of its energy getting the ball up the floor.

“Yeah, I was getting tired,” said Miedema, who only took five more shots after giving her team the 5-4 lead.

Mineral Point coach Michael Keyes said that was at the top of his team’s list when preparing for the game. That pressure made the Cardinals uncomfortable from the first possession on.

“We’re all about pressure and pace, and we try to speed the game up,” he said. “We shoot a lot of 3s, and the improvement of our two post players has been great over the last three or four weeks.”

One of those posts — junior Blair Watters — scored 20 points and grabbed 12 rebounds for the Pointers. She made 5 of 9 shots and went 3-for-5 from the 3-point line, and three of her rebounds were on the offensive end.

She made two of her 3-pointers in the first half. Five Pointers made at least one 3 before halftime, which made it tougher for Bangor to defend. Mineral Point also utilized good ball movement through the post to get the ball in the hands of open shooters.

Bangor didn’t score consecutive points until putting together a 7-0 run to get within 43-23 in the middle of the second half.

“I think going to state in four out of five years really says a lot about the state of the program and where we’re at,” Merlin Jones said. “We can’t overlook the fact of how many schools in the state didn’t get to play.”

Bangor's Haley Jones, center, fights for the ball during a WIAA Division 4 state semifinal against Mineral Point at the La Crosse Center on Friday. The third-seeded Pointers beat the second-seeded Cardinals 66-30.