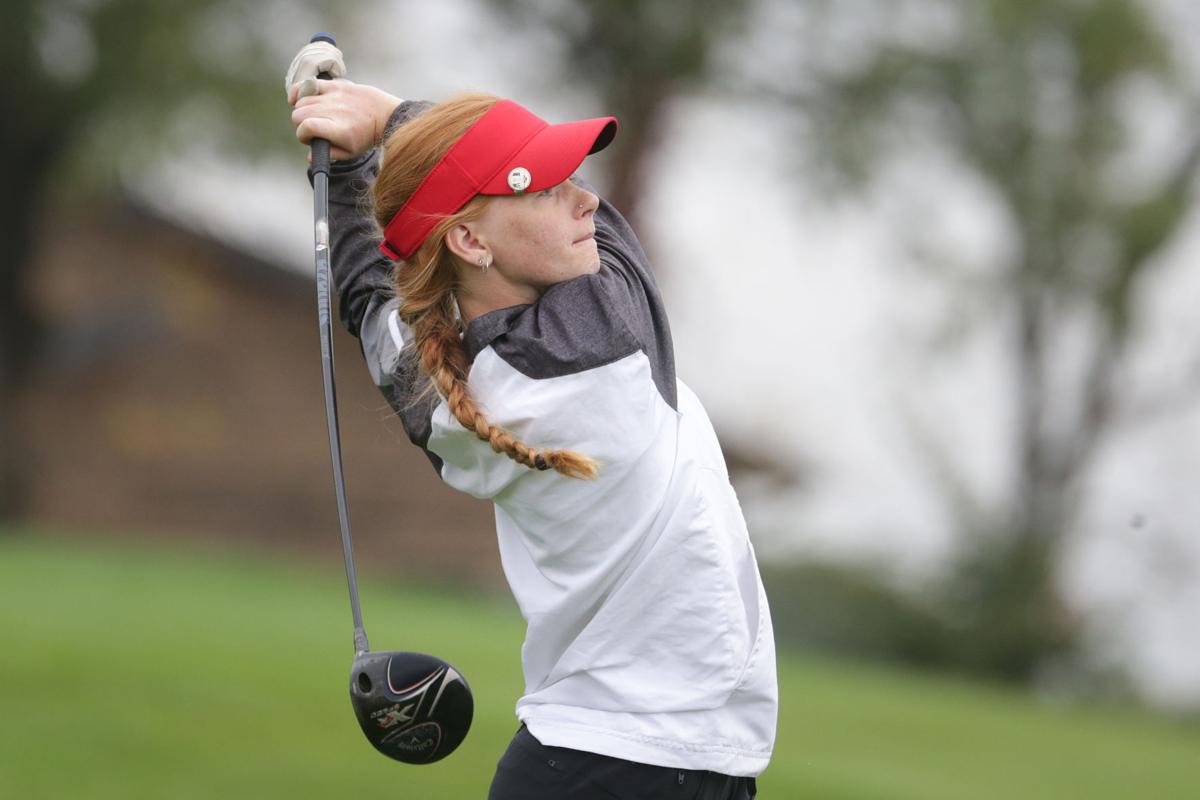 Aracadia/Independence's Hallie Tulip tees off on the first hole during the WIAA Division 2 state girls golf tournament at University Ridge Golf Course in Madison on Tuesday. 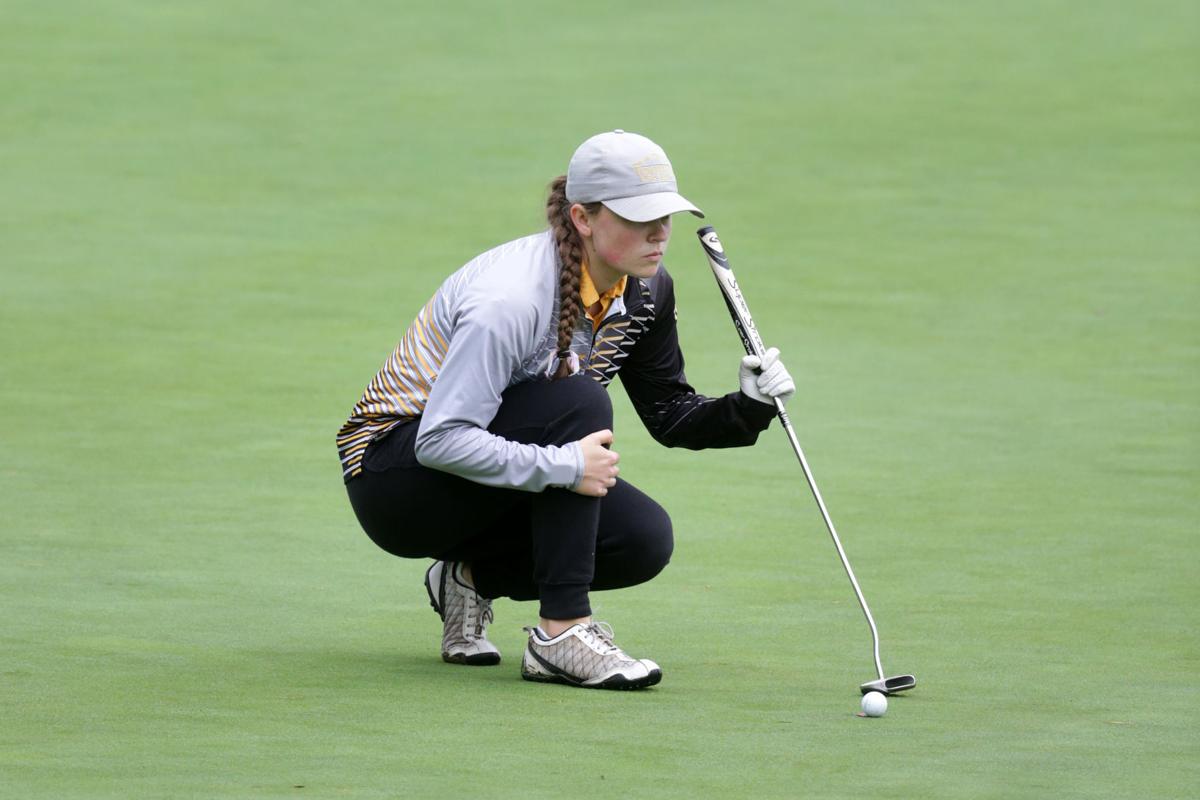 VERONA — Tonya Gnewikow knew her Tomah High School girls golf team would need solid performances from its top three if it were to finish where it wanted at the WIAA Division 1 state tournament.

And not only on one of the days at University Ridge Golf Course, but on both of them.

Sophie Pokela went low in Monday’s first round, carding a 4-over-par 76. But the senior followed with an 11-over 83 on Tuesday.

Brin Neumann had four birdies and finished at 4-over on Tuesday, but that only canceled out the junior’s 18-over round on Monday.

The Timberwolves were able to move up one spot on the leaderboard with a combined 46-over 334 in Tuesday’s final round, but an inability to string together consecutive low rounds left them at eighth with a two-round score of 99-over 675.

"Today was a better performance overall as a team," Gnewikow said. "I think we shot 334, which is not our season best, but at a course that honestly played very, very wet today yet — I mean, there was standing water in the fairways, the balls didn't get lots and lots of rolls — so I was happy, kind of overall, from a team aspect."

Still, the team felt like it didn't reach its full potential.

Westosha Central won the team state title at 61-over, and Sussex Hamilton was second at 68-over. Middleton, which was tied with Westosha Central for first after the opening round, dropped to third at 74-over.

Stevens Point’s Riley Pechinski won the individual title at 3-under.

Tomah entered the tournament ranked fifth by the state’s coaches and was looking to build on a seventh-place finish in 2019 and a fifth-place finish in 2020. After winning regional and sectional titles to earn the team’s third straight trip to state, Gnewikow said the Timberwolves’ goal was to finish in the top five once again.

That proved difficult after 53-over 341 had them in ninth place after a long and rainy opening round on Monday.

Neumann paced the team with her 4-over, which bumped her up to tied for 28th individually. She triple-bogeyed the par-4 fourth but had birdies on Nos. 2, 6, 11 and 16; that helped her shoot 2-over on each nine.

"She was putting well today again, so that helps," Gnewikow said. "... It always seems like when I put a prize on the line for putting, she steps up to that."

But Pokela, who entered the day tied for 12th, carded a pair of double-bogeys over her first four holes and was unable to make any strokes back. She dropped to a tie for 17th individually.

Junior Amelia Zingler, who shot a 16-over 88 on Monday, started her second round strong but again struggled on the back nine. The team’s No. 3 golfer was 3-over through nine holes — thanks in part to a birdie on the par-5 second — but she had three double-bogeys on the back and finished with a 13-over 85.

"Amelia, a little bit better today again but just not to her potential. I mean, at University Ridge in August, she shot a 74," Gnewikow said. "... I think we were through like 14 or 15 holes, and she had already seven three-putts."

Junior Madeline Ewers, who shot an 15-over 87 on Monday, carded an 18-over 90 on Tuesday to round out Tomah’s scoring.

"I am very, very happy with how the entire season unfolded and came out," Gnewikow said. "Even now, when we just got out of the van, I again told the girls how proud (I am). And there were, at first, a couple hesitations like, 'But we were like the best, we could have ...' and I'm like, 'Whoa, whoa, whoa wait. You guys accomplished things that haven't been done before.'"

And while the Timberwolves will lose Pokela to graduation, the rest of the team returns for next season.

"We definitely have an opportunity next year to do the same type of thing," Gnewikow said.

Onalaska’s Allison Balduzzi, who was competing as an individual along with teammate Kiya Bronston, moved up one spot to 19th with a 9-over 81 on Tuesday. Balduzzi, who finished with a two-round total of 160, was 8-over through nine holes on Tuesday but had two birdies, four pars and three bogeys to close out her round.

Arcadia/Independence, which was ranked fifth entering the tournament, followed a combined 99-over 387 on Monday with a 114-over 402 on Tuesday for a two-round total of 213-over 789.

Hallie Tulip, who was third individually after the opening round, shot a 19-over 91 on Tuesday and dropped into a tie for eighth.

Whitney Sonsalla shot a 20-over 92 in the final round and finished tied for 20th. Ahnna Bautch carded a 32-over on Tuesday, while Ithzel Cossio shot a 43-over.

Prescott won the team title at 95-over, while St. Croix Central (144-over) was second and Racine Prairie School (147-over) was third.

Prescott’s Ava Salay, who shot 2-under on Tuesday, finished 4-over and won the individual title.

Aracadia/Independence's Hallie Tulip tees off on the first hole during the WIAA Division 2 state girls golf tournament at University Ridge Golf Course in Madison on Tuesday.