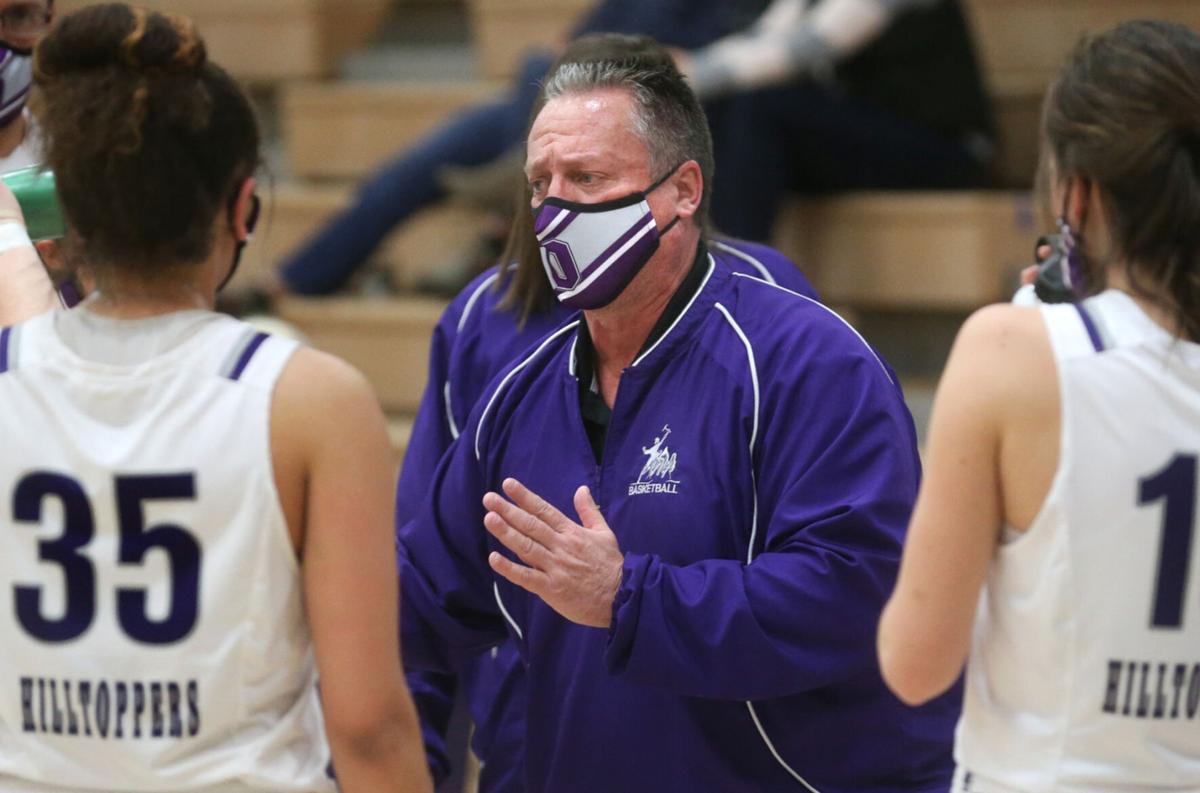 Onalaska High School girls basketball coach Shane Schmeling talks to his team during a nonconference game against Prairie du Chien this season. The Hilltoppers are at the WIAA Division 2 state tournament for the second time after a 17-3 season. 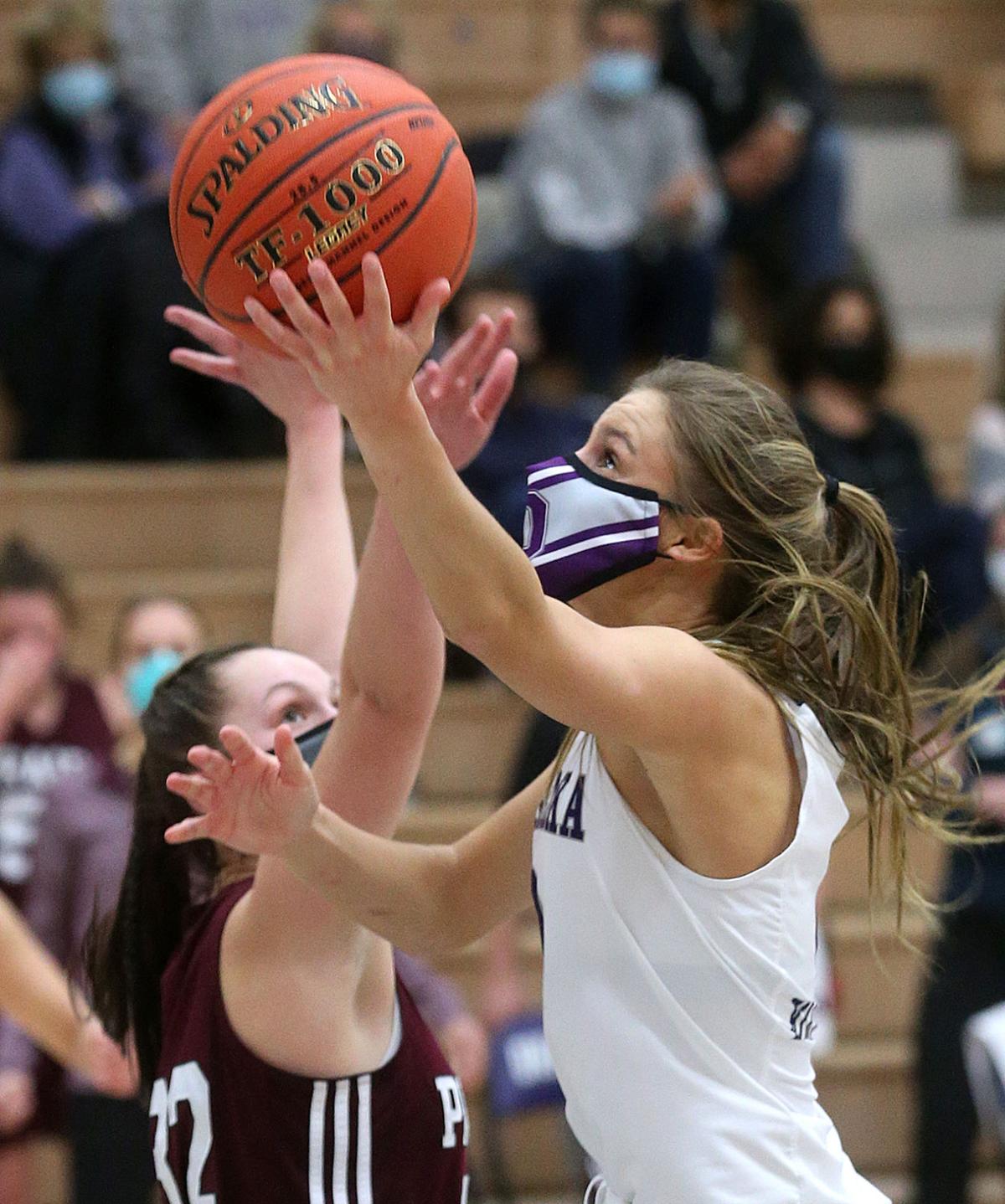 ONALASKA — Devyn Schmeling remembers the thrill of watching her sister play in the WIAA Division 2 state girls basketball tournament in 2016.

She recalls the excitement of the drive to the Resch Center in Ashwaubenon and finding her seat to watch Hallie and her Onalaska High School teammates play the biggest game in program history.

The disappointment of a 59-56 loss to Stoughton stung — closes losses always do — but the experience is one that obviously stuck with Devyn, whose eyes light up immediately with questions about the event.

“I was going crazy the whole game,” the junior said as a huge smile almost certainly hid behind the mask she wore. “I was jumping up and down in the stands. I was on my feet cheering and screaming for my sister, and it was amazing.”

The Hilltoppers made history that day by playing in their first state tournament. After waiting a few decades for that first appearance, Onalaska (17-3) returns five years later.

Teammate Olivia Gamoke was also at the Resch for the 2016 tournament to watch her older sister, Emma. While the players and spectators from five years ago have swapped roles, the excitement has remained.

Devyn and Olivia will try to take the program forward another step under the watchful eyes of their sisters as they battle against top-ranked Green Bay Notre Dame (26-1) in a 9:05 a.m. state semifinal at the La Crosse Center on Saturday.

Nowadays, Hallie starts for the St. Mary’s University (Minn.) women’s basketball team, which has a 2 p.m. game in St. Paul on Saturday. The process she uses to follow the action has yet to be determined. Emma is the leading scorer for UW-La Crosse, which doesn’t play that day.

This — qualifying for the state tournament — was the goal when the season began because it had to be for a team that has won a regional championship every season since that first state tournament.

The Hilltoppers advanced to a sectional final a year ago, but Hortonville kept them out of the tournament with a 72-68 victory, and River Falls beat them 63-53 in a sectional semifinal two years ago.

Hortonville beat Onalaska 69-59 in a 2018 sectional final, and Menomonie handed it a 59-53 loss in a sectional semifinal the year before.

It was time to break through, and the Hilltoppers did that in grand fashion with a 22-point win over a Rice Lake team it lost to during the regular season.

“We’ve played in a sectional final three of my four years,” Gamoke said. “It’s awesome to win one and get the chance we’ve been wanting for so long.”

The Hilltoppers have given themselves that chance by playing their best basketball at the right time. That will have continue on a level yet to be reached when facing the Tritons on Saturday, but playing good basketball is rewarded by games against better opponents.

Despite a decent amount of graduation losses, Onalaska was a team many thought could succeed as a group built around players like Gamoke and senior Molly Garrity.

Those two players possessed the most experience on the court and would have to be the anchors in any kind of deep postseason run.

“As a coach, I always felt like we had the potential to get to state,” coach Shane Schmeling said. “But it’s hard. A lot of things have to fall right for it to happen, from the kinds of games you win and situations you play through to how seeding meetings play out.”

So, how did the Hilltoppers complement their anchors and take advantage of situations they faced during the regular season and first few games of the postseason?

They started by taking advantage of an incredible season from Gamoke, a University of Sioux Falls (S.D.), who has impacted the team in every possible way.

The 5-foot-6 senior isn’t just leading the team in scoring at 20.6 points per game, she is leading it in rebounding (6.3). Gamoke has no problem mixing it up in the post to chase the basketball or to take it to the rim.

“It’s amazing to think about how good of a rebounder she has been this year,” Shane Schmeling said. “But that’s something we need from here, and she will do anything this team needs.”

Make no mistake about it. While the Hilltoppers have have shown depth and balance, Gamoke is what makes them go.

They added to that the return of a healthy Devyn Schmeling from a horrific leg injury that threatened to rob her of a sophomore season. She worked her way back onto the court in a limited role a year ago but was going to be relied upon heavily as a junior.

The guard has responded by scoring 7.3 points and a team-high 3.9 assists per game while making 18 of 54 attempts form the 3-point line.

Juniors Ava Smith and Emma Breidenbach have provided scoring punch and additional perimeter threats, and freshman Anna Skemp has mad an immediate impact with her defense more than anything.

And that brings us to Garrity, who fills in wherever the need exists

Need points? She can score. Need a finisher in transition? Give her the ball. Need rebounds? She’s there.

Need someone to play harder than anyone on the court? She’s your girl. Always.

“This has already been more than I could have asked for,” Garrity said of qualifying for the tournament. “We’ve been close every year and to finally make it is hard to explain.

“This group is insanely competitive and had the drive to get here.”

Onalaska High School girls basketball coach Shane Schmeling talks to his team during a nonconference game against Prairie du Chien this season. The Hilltoppers are at the WIAA Division 2 state tournament for the second time after a 17-3 season.