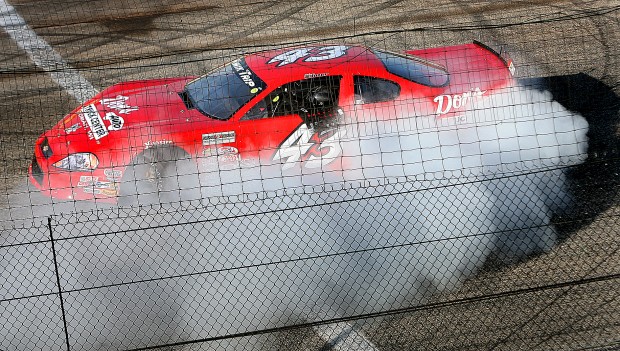 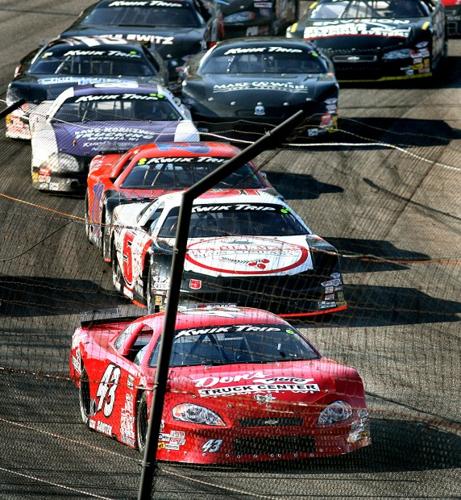 WEST SALEM - Sometimes it is the venue that touches the heart more than national television cameras or thousands of fans watching you do your thing at big-time race tracks.

Coming home can be pretty sweet.

Johnny Sauter, who spent the 1997 season racing at the La Crosse Fairgrounds Speedway, returned to the same track Sunday afternoon and crossed one event of his "must win" race wish list. Sauter held off his nephew, Travis Sauter, to win the biggest race of the four-day Oktoberfest Race Weekend - the ASA Midwest Tour Oktoberfest feature - Sunday afternoon before a crowd estimated at more than 5,000.

After a dominating performance in which he led all 100 laps, Johnny Sauter will forever be known as an Oktoberfest race champion. He did a pretty mean victory doughnut, too, smoking the crowd.

"I don't know, I am speechless. I have been fortunate enough to win some Nationwide races and some Truck races, but this one is pretty high up there," Johnny Sauter said.

"It is a big one, it really is. Every win is special in its own way and this is obviously a nostalgic thing for me as a kid, growing up watching my dad and brothers race here. That is what makes this so special for me. I don't know how you measure wins on a scale, but this is up there. This is big."

Johnny Sauter, who has raced in all three big-time series - Sprint Cup, Nationwide and Camping World Truck Series - has had his eye on the Oktoberfest 100 for a long time. He built his own car, and this was the first time it had seen the track.

He might want to hang on to this one.

Sauter, the top qualifier, started on the pole and stayed out front for each lap. He was certainly challenged by Travis, who moved into third place by Lap 5, then grabbed second place away from Nick Murgic on Lap 8.

Travis Sauter would remain in the runner-up spor for the remainder of the race, but simply didn't have enough grip coming out of the corners to pull even, or pass, Johnny.

Weinkauf and Holzhausen engaged in a race-long battle for third place. Holzhausen would threaten to take it away, but was forced to settle for fourth - one spot removed from the podium.

"I couldn't quite get that podium (top three) finish like I was trying," Holzhausen said. "Every time I could get to him, we got in lap traffic it seemed like. I just didn't quite have the bite off to get to his door to complete the pass.

"He is fun to race with. All of these guys are. It is fun racing this whole tour."

There were two cautions early in the race, the last one coming on Lap 15. That is when defending Oktoberfest 100 champion Dan Fredrickson and Jacob Goede got together going into Turn 3. Fredrickson's car smashed into the outside concrete wall.

Fredrickson, who won the Oktoberfest 100 in 2007, 2008 and 2010, was done for the day. Goede was able to return and turned in an impressive comeback, finishing sixth.

AREA FINISHERS: Sparta's Tim Schendel finished 13th, while West Salem's Steve Carlson was 25th. Carlson struggled with his car's setup, qualifying 30th. The 2000 winner of this race, Carlson dropped out of the race on Lap 43.

Five players who have played at five World Cups