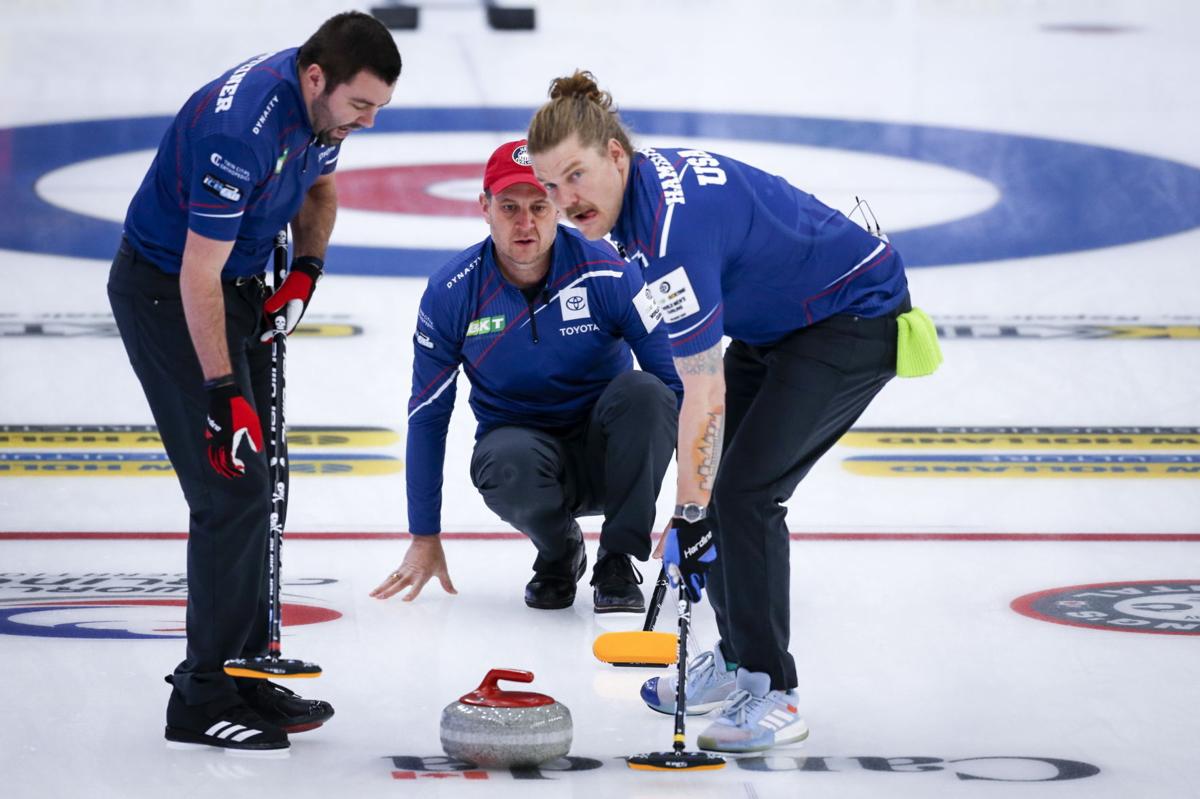 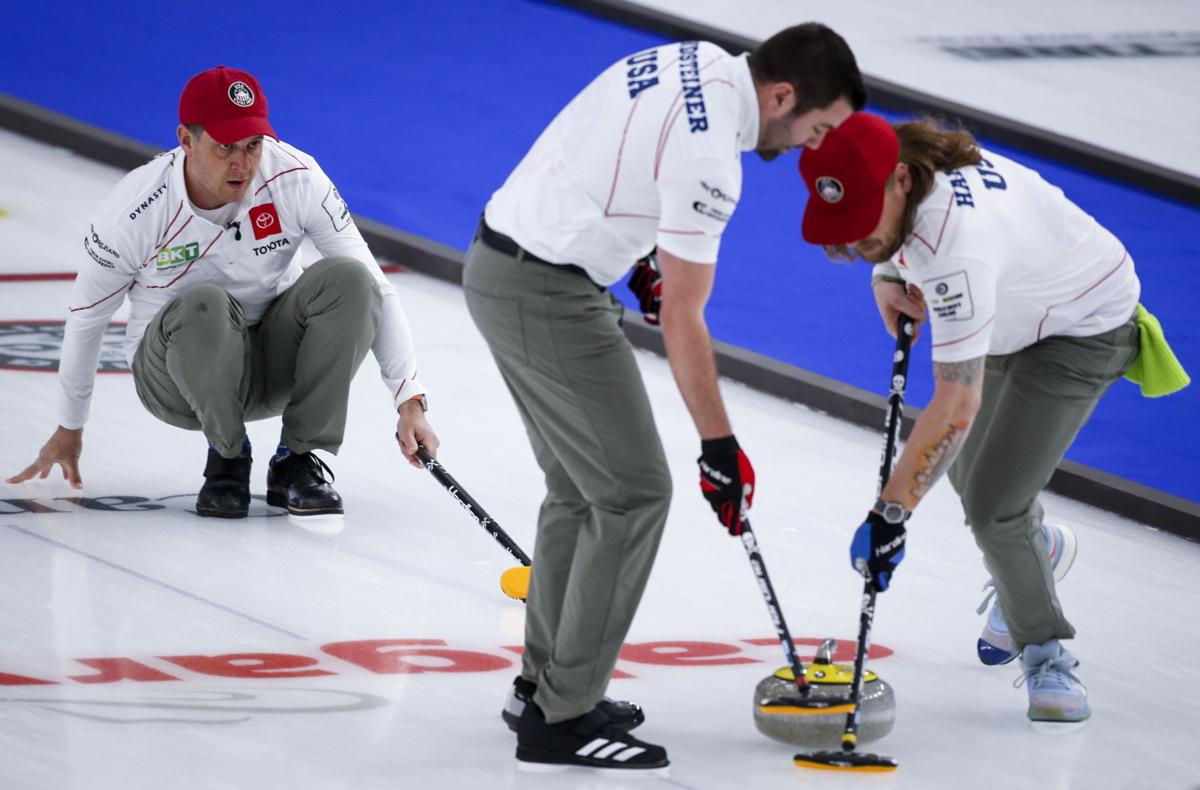 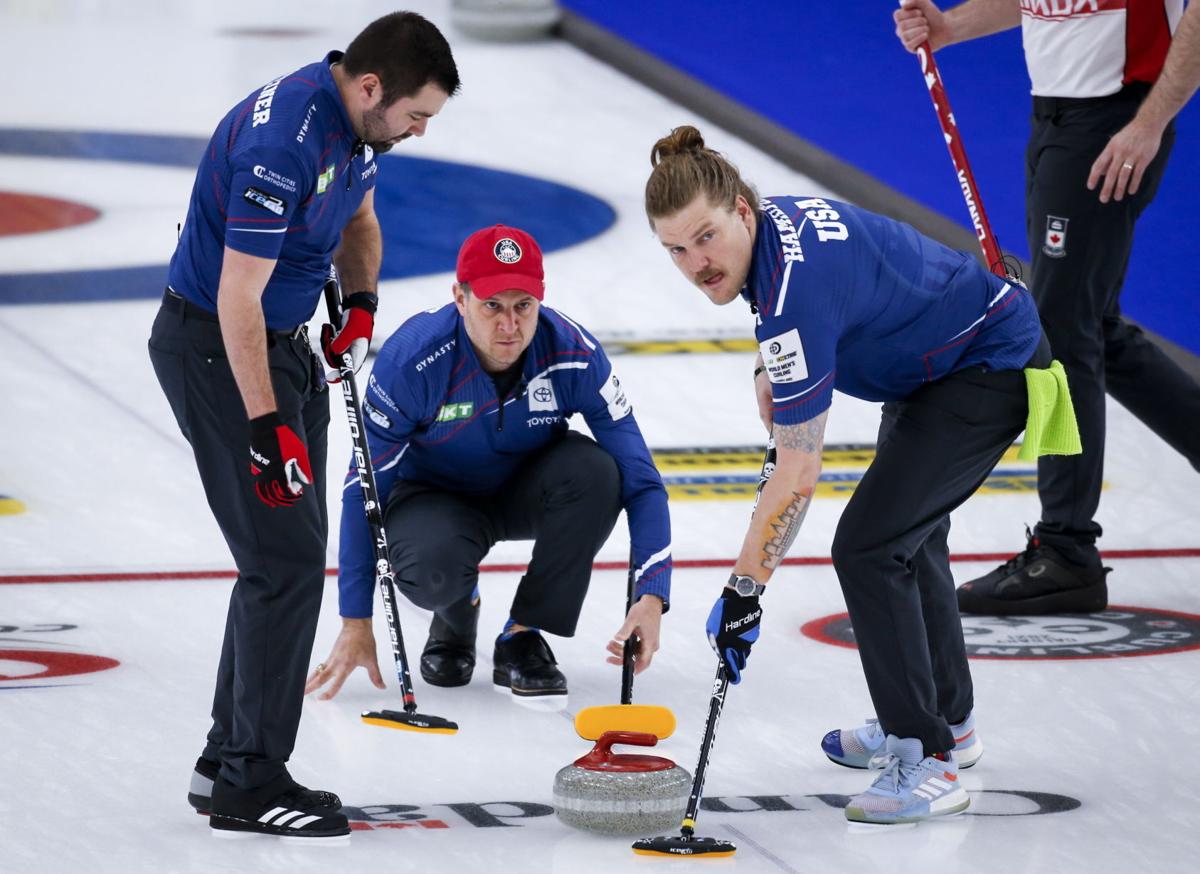 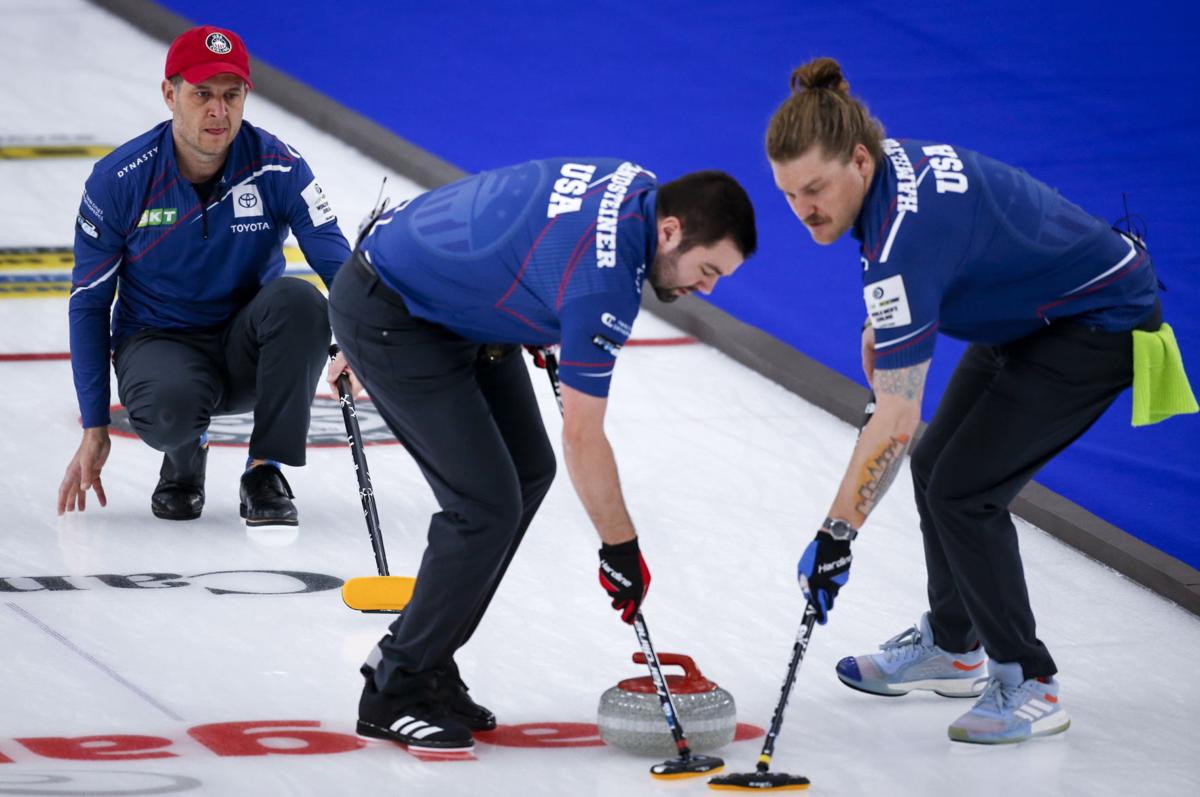 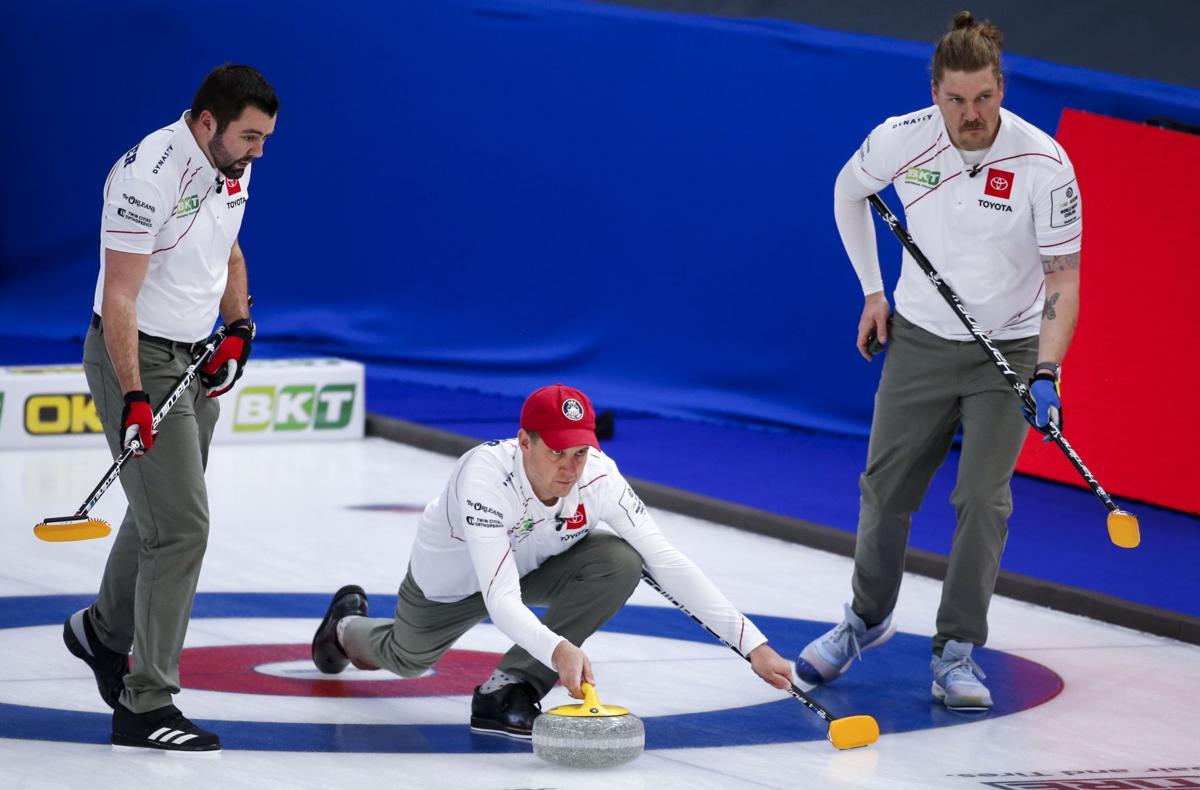 United States skip John Shuster makes a shot as John Landsteiner and Matt Hamilton, right, prepare to sweep during a match against Norway at the World Men's Curling Championship earlier this month in Calgary, Alberta. 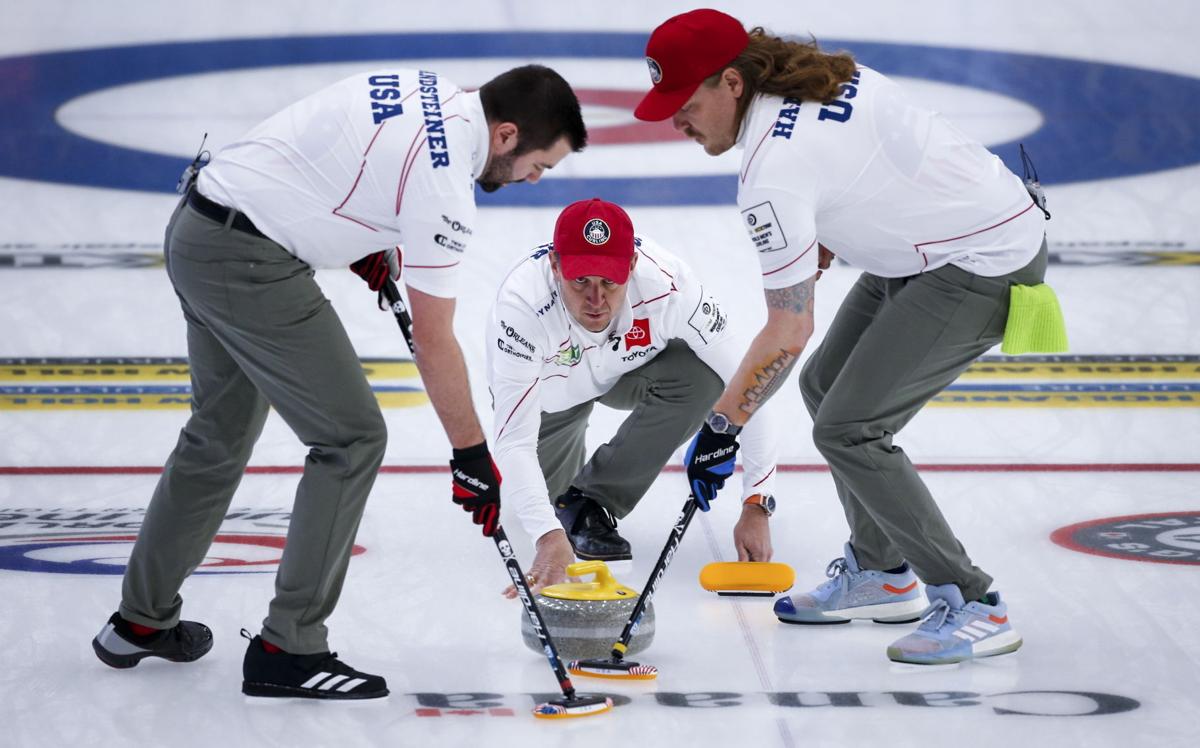 Clinching an Olympic berth for the United States was an afterthought for Matt Hamilton.

“It’s satisfying, but our goal was to go to the world championship and get a medal,” he said about the Olympic bid. “If we accomplished our goal, we were easily going to qualify” for the Olympics.

They only needed to finish the round robin play in sixth place or better among the 14 teams to grab a spot for the U.S. in next year’s Winter Games in Beijing. Their 13-3 record put them in third place, and their intended goal seemed within grasp heading into last weekend’s playoffs at the event.

Until a phone call the night before their quarterfinal game against Switzerland threw the tournament into a tailspin.

The event had created a bubble to minimize the possibility of a player contracting the coronavirus. Each player quarantined for four days and needed three negative tests upon arrival before the tournament began. After that teammates were allowed to get together in hotel rooms but were told to wear masks and be as careful as possible.

“It was my first time experiencing an athlete style bubble, and it felt really safe,” Hamilton said.

There normally is at least some interaction between teams off the ice — “at least going down to the hotel lounge and having a beer” — but that was limited to occasional conversations in the hallway this year.

There weren’t any reported COVID-related issues from April 2, the opening day of the tournament, through April 8. It was when players again underwent testing last Friday, this time to be able to return to their home countries, that a problem arose.

There were rumblings last Friday night, as the quarterfinal between Scotland and Canada was nearing its conclusion, that multiple curlers in the bubble had tested positive for COVID. All the curlers were told to go back to their rooms and quarantine while the details were sorted out.

“We had to go through the rumor mill,” Hamilton said. “That was honestly the big issue with it. I felt like they were so much more concerned with press releases than telling individual players.”

Hamilton says he was trying to wrap his head around how it had happened since all the curlers had been confined to the bubble, but he admits it crossed his mind that he could have been one of the athletes who tested positive.

It wasn’t until later in the evening that Hamilton’s teammate Chris Plys got a knock on his door and was told he was one of the curlers who had tested positive for the coronavirus.

“Rather than focus on a world championship, it was more like is everyone on the team OK?” Hamilton said. “Is everyone gonna be OK?”

Except Plys’ positive test seemed highly unlikely. That’s because he’d received his second dose of the Pfizer vaccine weeks before this positive test. New tests were administered to all the athletes the following morning, Saturday, and everyone tested negative, even the four who had tested positive the day before.

“We weren’t even thinking about playing at this point,” Hamilton said. “We’re all just hoping we’re all OK and no one’s sick.”

Hamilton and his Team Shuster were told they would play their quarterfinal Sunday morning. They finally could resume their pursuit of their goal — a medal at the world championship. Except the negative tests far from settled the matter.

Plys, who plays third for the team, was told Sunday morning that he would not be permitted to play. Despite testing negative multiple times after the lone positive test. Hamilton said the team got in touch with the U.S. Olympic Committee to try to get a doctor to help explain the likeliness of Plys' positive test being a false positive. It wasn’t until Monday, the day after the tournament ended, that organizers acknowledged they were false positives.

The team considered forfeiting the quarterfinal in protest, but Plys forbid it. That meant Hamilton, who usually plays second, would be forced to slide into Plys’ spot at third.

“Not that I’m afraid of playing third, but I did not want to make my debut playing third at the world championship quarterfinals,” Hamilton said.

Tom Oates: Tommy Awards highlight the good — and bad — in the last year of sports in Wisconsin

That’s where his mind was at as Team Shuster, minus Plys, who stayed at the hotel, left for the arena.

Until there was another call. This time on the way to the arena.

“We actually called Chris because we got the news, like hey get your stuff on, we’re gonna send a guy back to get you,” Hamilton said.

Plys had been cleared to play as long as everyone on the ice wore masks. Hamilton would stay in his normal spot as second and the full Team Shuster roster would get a crack at Switzerland and a spot in the semifinals.

“It was relieving, but at the same time, it was like OK I’ve got to get my mindset back into my game mode,” Hamilton said.

Plys arrived about 40 minutes before the quarterfinal started. Team Shuster, which had defeated Switzerland 8-6 in the round robin, kept it close in the quarterfinals but gave up a pair to break a tie in the ninth end and only could muster one in the 10th end to fall 7-6. Their tumultuous pursuit of a world championship medal was over.

“I’m actually pretty pleased with how we played, considering the circumstances,” Hamilton said. “We played a good game. It just sucks because now you ask in your head, what if that didn’t happen. What could have been?”

After a bit of decompressing after a weird world championships, I wanna say thanks to all the fans who supported us. You really enhance the fun we have out there. Not the ideal result, but we grew as a team and overcame adversity and played really well! Love this team! #curling pic.twitter.com/xgiWaX5UP0

The chaos of the final 48 hours of the world championship seemed like a fitting cap to the season that presented multiple challenges. It’s usually less than a five-minute drive for Hamilton to get to practice at the Madison Curling Club in McFarland. But the club didn’t open this season, which means he was forced to drive to the Arlington Curling Club, about a half hour drive, to get on ice.

“It was kind of a bummer there, but beggars can’t be choosers,” Hamilton said.

He practiced three times a week for two hours in Arlington and made the drive to Duluth, Minnesota, every other weekend to practice with his teammates, who all live in that area.

“It was masked practices the entire time,” he said. “Very rarely would I go to one of the guy’s houses and stay there. More often than not I got a hotel. So it was definitely a weird season.”

Hamilton’s mustache emerged as his signature look during the run to the 2018 Olympic gold medal, but he wanted to add something else, something different. He had decided to let his hair grow for the 2020 world championship.

“I’m married for a while — she’s in it for the long haul now — and I’ve never grown my hair out,” he said. “My dad made me cut it when I was a kid. … I had it just about long enough for a top knot when worlds would have happened last year.”

The world championship fell victim to the pandemic, but Hamilton wasn’t about to give up. He determined he’d wait until after this year’s championship.

“My wife was like ‘I’ll cut it,’ and I’m like ‘The heck you will,’” he said with a laugh. “That’s kind of when I decided if I’m gonna grow it out for another year, make it for a good cause.”

The flow won’t be around much longer. He’s trying to raise money for StacheStrong, an organization that supports brain cancer research, through pledges for the hair cut and plans to donate the hair.

Hamilton keeps a healthy perspective on the season. An Olympic berth was secured and Hamilton said the team is considering its approach to practices and games after it performed so well in Calgary with little game experience this season. He won’t miss the regular solo car trips to Duluth for practice and is eager to practice again at his home club in McFarland. There’s one lesson he has learned during this unprecedented season.

“I appreciate the camaraderie way more,” he said.

United States skip John Shuster makes a shot as John Landsteiner and Matt Hamilton, right, prepare to sweep during a match against Norway at the World Men's Curling Championship earlier this month in Calgary, Alberta.