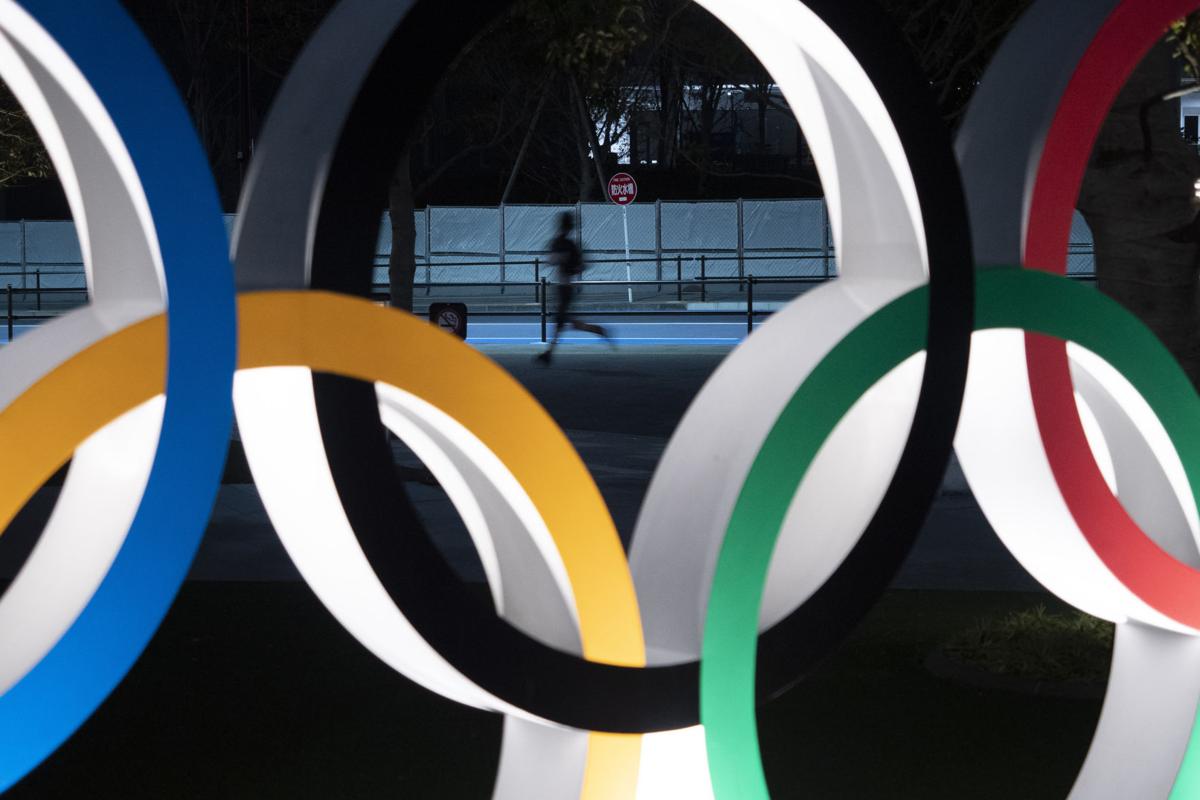 A man jogs past the Olympic rings on March 30 in Tokyo. Katsuhiro Miyamoto, an emeritus professor of sports economics at Kansai University, puts the rescheduling costs as high as $4 billion. 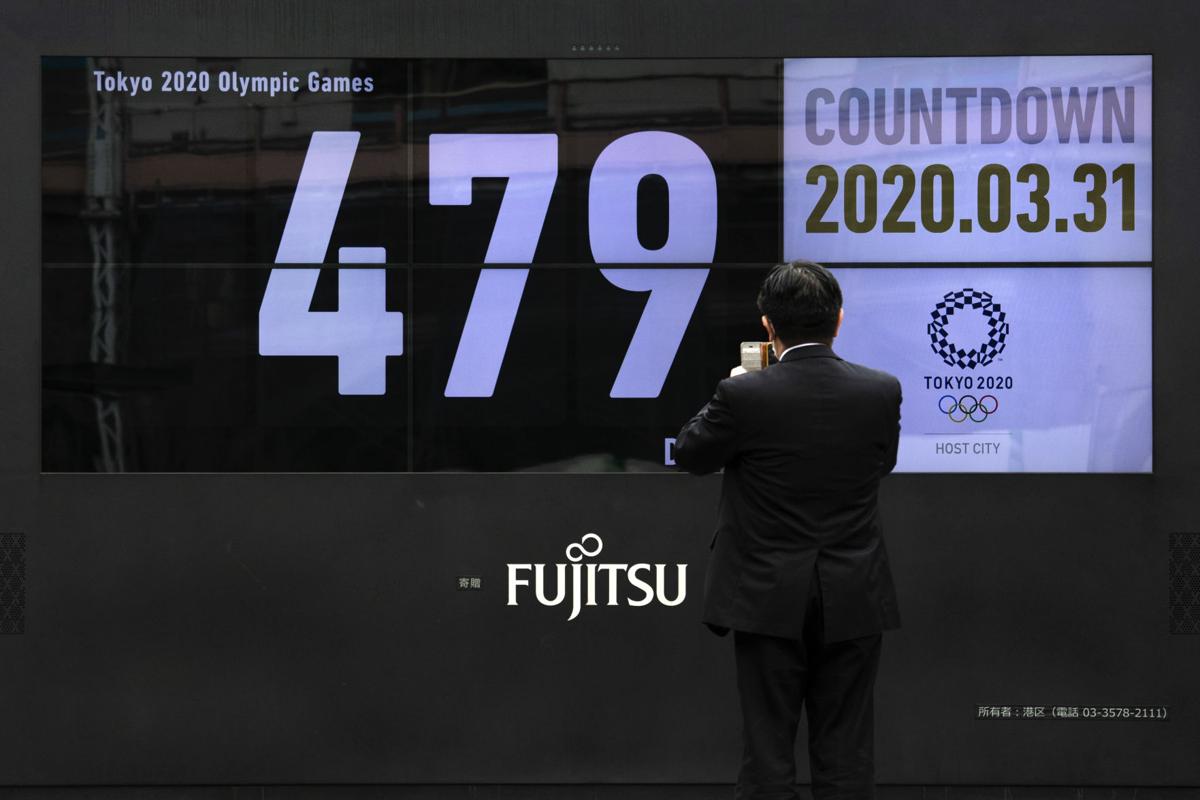 A man takes pictures of a countdown display for the Tokyo 2020 Olympics and Paralympics Tuesday, March 31, 2020, in Tokyo. The countdown clock is ticking again for the Tokyo Olympics. They will be July 23 to Aug. 8, 2021. The clock read 479 days to go. This seems light years away, but also small and insignificant compared to the worldwide fallout from the COVID-19 coronavirus pandemic.

TOKYO — The countdown clocks have been reset and are ticking again for the Tokyo Olympics.

The model outside Tokyo Station, and others across the Japanese capital were switched on almost immediately after organizers announced the new dates — July 23 to Aug. 8, 2021.

The clocks read 479 days to go. This seems a long way away, but also small and insignificant compared with the worldwide fallout from the coronavirus.

Then again, it's not much time to reassemble the first Olympics to be postponed since the modern games began 124 years ago; not for 11,000 Olympic athletes, 4,400 Paralympic athletes — and not for sponsors, broadcasters, the fans that have already bought tickets, and Japanese organizers and taxpayers who have spent billions, and will have to come up with billions more to pay for the setback.

“I believe that these Olympics are going to have great historical significance,” Yoshiro Mori, the president of the Tokyo organizing committee, said after confirming the new dates.

Mori, an 82-year-old former Japanese prime minister, also recalled there's no guarantee that the coronavirus pandemic will be under control a year from now. That includes the new dates for the Paralympics now set for Aug. 24-Sept. 5.

“This is a prayer that we have and I do believe that someone is going to listen to our prayers," Mori said.

After cursory talk about an Olympics in the spring, the new summer dates overlap perfectly with the same time slot that was picked for 2020. Organizers are hoping to overlay the old plans with new plans, keeping venues in place, securing thousands of rooms in the Athletes Village, deploying the same volunteers, and letting people who bought tickets keep them.

The summer date also avoids conflicts with the crowded North American and European sports schedules. But summer in Tokyo also means grappling with intense heat and humidity, the major worry for games organizers before the pandemic.

“Obviously in the summer there might be typhoons and the heat problems,” Mori said. "However, this situation is the same. We always had those problems so we will be prepared for those issues."

Though the international sports federations went along with the new dates, some like the International Triathlon Union preferred the cooler spring during Japan's cherry blossom season. But that was overridden by the easiest route to lining up venues.

“We are having discussions with all the venues at the moment," said Toshiro Muto, the CEO of the organizing committee. “At this point we don't have a final decision. However, some problems have already become apparent."

Muto said organizers haven't yet heard from any venues saying the rescheduled Olympic events can't be staged there next year.

“There are a lot of venues that can't make a decision yet. So we have to negotiate with them," he said. “If we have to make a change to the venues, then we might have to change the competition schedule as well."

“I personally don't think there are going to be many major changes to the (competition) schedule," he added. “But our discussions haven't gone that far yet.”

David Wallechinsky, the president of the International Society of Olympic Historians, said the Olympics in 2021 — they will still be officially called the 2020 Olympics — could become a symbol for a world pulling together after the pandemic.

“I see this postponement as more of an opportunity for the Olympic Movement, rather than a setback,” he said in an email to the Associated Press.

He said an outright cancellation, rather than postponement, probably was not feasible.

“From a financial point of view, cancellation was not a viable option,” he said. “The repercussions would have been complex and widespread.”

Mori and Muto have both acknowledged rejiggering the Olympics will incur “massive costs.” Estimates range between an added $2-6 billion. And Japanese taxpayers will pick up most of the bills, as they have for most of the preparations so far.

Muto promised transparency in calculating the costs, and testing times deciding how they are divided up.

“There will be costs and we will need to consider them one by one,” Muto said. "I think that will be the tougher process.”

Japan is officially spending $12.6 billion to organize the Olympics. However, an audit bureau of the Japanese government says the costs are already twice that much. When it won the bid in 2013, Tokyo said the Olympics could cost $7.3 billion.

All of the spending is public money except for $5.6 billion from a privately funded operating budget. About $3.3 billion in that budget has been raised from local sponsorship deals driven by Dentsu Inc., Japan's giant advertising and public relations company.

That amount is almost three times more than any previous Olympics.

The Switzerland-based International Olympic Committee is contributing $1.3 billion to the Tokyo Olympics, according to organizing committee documents. The IOC's contribution goes into the operating budget.

The IOC had income in the latest four-year Olympic cycle of $5.7 billion, and 73% was from selling broadcast rights with 18% from long-term sponsor revenue. The American broadcaster NBC makes up half of the IOC's broadcast revenue and pays more than $1 billion for the rights to each Olympics.

The IOC also has almost $2 billion in reserve funds and insurance to cover emergency situations.

“NBC, in particular has a lot to say,” Wallechinsky, the historian, said. “That's why the games are scheduled for the summer, which is not ideal for athletes competing in outdoors sports. The 1964 Tokyo Olympics took place in October, when the weather was more favorable."

The Olympics planned for 1940 in Tokyo were canceled because of Japan's war with China. So were Olympics in 1916 and 1944. And these Olympics have had a bumpy time, which included the resignation last year of the president of the Japanese Olympic Committee amid a bribery scanda l.

“Even the 1940 Tokyo Olympics were planned for September-October," Wallechinsky said. "For 2020-2021, you see the power of television.”

A man jogs past the Olympic rings on March 30 in Tokyo. Katsuhiro Miyamoto, an emeritus professor of sports economics at Kansai University, puts the rescheduling costs as high as $4 billion.

A man takes pictures of a countdown display for the Tokyo 2020 Olympics and Paralympics Tuesday, March 31, 2020, in Tokyo. The countdown clock is ticking again for the Tokyo Olympics. They will be July 23 to Aug. 8, 2021. The clock read 479 days to go. This seems light years away, but also small and insignificant compared to the worldwide fallout from the COVID-19 coronavirus pandemic.