Jason Myers kicked off to start the Seahawks' season-opener against the Falcons, and the ball sailed through the end zone for a touchback. No one moved a step.

Instead, the players all dropped to one knee.

After years of pleading with the NFL to act against systemic racism, they were willing to wait another 10 seconds to make their point.

Teams opening the year in empty stadiums knelt, locked arms, raised fists in protest or stayed off the field entirely for the "Star-Spangled Banner" and the Black anthem "Lift Every Voice and Sing" on Sunday as the once-reluctant league brought racial injustice to the forefront on the NFL's first full slate of games.

In Atlanta, the teams wore armbands honoring civil rights leader John Lewis and staged the most striking of the day's gestures: They barely flinched as the opening kickoff landed beyond the end line, took a knee, and remained there for about 10 seconds before trotting off the field to resume the game.

"It's a start," Falcons running back Todd Gurley said after the game. "Are we going to keep doing this? ... You don't want to make it a one-time thing — just like having a good game, and then the rest of the season you do nothing."

Lewis, the Georgia Congressman who died in July, was an honorary captain for the game. The Falcons also wore shirts with his quote: "The Vote is the most powerful, nonviolent change agent you have in a democratic society."

And that's just what the Falcons and Seahawks did before the game.

Photos: NFL protests across the league on Sunday

Teams opening the year in empty stadiums knelt, locked arms, raised fists in protest or stayed off the field entirely for the "Star-Spangled B…

"Everybody voted and said we're going to come together as a unit," Atlanta receiver Julio Jones said. "Collectively, we can move mountains."

While fans were absent everywhere except Jacksonville because of the coronavirus pandemic, the Minnesota Vikings hosted the family of George Floyd, who died in May in a videotaped killing that sparked national protests over police brutality against Black people.

Vikings players locked arms in the end zone about a half-hour before their game against Green Bay for "Lift Every Voice," which was played before each game in Week 1 along with the national anthem as part of the NFL's social awakening. At least six Vikings knelt during the "Star-Spangled Banner," something coach Mike Zimmer had opposed previously.

"A couple years back, kneeling was the worst thing you could do. And now if you stand, people have something to say about that," Minnesota linebacker Anthony Barr said. "There's always going to be people trying to divide from inside. But, however you feel about it, you should express it your way."

About 10 of Floyd's relatives were then shown on the stadium video board from their perch in the upper concourse near the Gjallarhorn. The symbol from Norse mythology, which gave the Vikings their name, had been sounded before every game since 2007.

On Sunday, the team said, it remained silent "to call attention to these silenced voices and collectively work toward a better, more just society."

The Packers remained in their locker room for the two songs, following the lead of the Miami Dolphins, who relased a video last week saying they would stay off the field for the national anthem rather than participate in "another publicity parade."

"This attempt to unify only creates more divide," the Miami players said in the video. "So we will skip the song and dance and as a team we'll stay inside."

Here's a look back at sports happenings on this date in history, Sept. 14.

The Jacksonville Jaguars, Buffalo Bills, New York Jets and Arizona Cardinals also remained in their locker rooms for both songs. Before Thursday night's season opener in Kansas City, the teams were booed when they locked arms in a pregame sign of unity; there was no sign of vitriol in Jacksonville, where the Jaguars distributed 14,000 tickets for the only NFL game with fans in attendance on Sunday.

A few dozen players knelt during the anthem, a silent echo of the 2016 protest by 49ers quarterback Colin Kaepernick that forced the NFL to confront racial injustice in a way that Commissioner Roger Goodell and many of the league's most powerful owners wanted to avoid.

Colts coach Frank Reich also dropped to one knee, and his players noticed.

"Frank is the leader of this team ... and he's the one who says 'You know it starts with me,'" Indianapolis linebacker Darius Leonard said. "That definitely means a lot and that's why we stand behind coach Frank, he stands behind us, and we all stand together."

The Colts were among the teams denying that their protest was unpatriotic, a point Kaepernick also made, but which has often been drowned out by those — including President Donald Trump — latching onto the issue. "To be clear — we were not protesting the flag, the anthem, or the men and women who wear the uniform," the Colts said in a statement.

Patriots owner Robert Kraft lined up with his team when the Black anthem was played before New England's game against Miami. Quarterback Cam Newton, who made his Patriots debut, appeared to be singing along.

The Dolphins remained in their locker room.

"It's inspiration," Miami safety Bobby McCain said afterward. "We have a platform and we ... will keep using it."

When the anthem began in Detroit, a slew of Lions walked off the field and headed toward their locker room; some remained on the field and knelt. On the other sideline, several Bears players knelt while 20 others waited for the anthem to end before jogging onto the field.

The NFL had been at the center of social justice protests in American sports ever since Kaepernick began kneeling during the national anthem in 2016 to call attention to the systematic oppression of Black Americans. Kaepernick, who led San Francisco to the Super Bowl in 2012 and the NFC title game the next year, was unable to get a job in the league in 2017 — or since.

But the football league was in its offseason when Breonna Taylor was shot in her own apartment by Louisville police in March; when a white Minneapolis police officer pressed his knee on Floyd's neck for nearly eight minutes in May, killing him; when Jacob Blake was shot and paralyzed by Kenosha, Wisconsin, police in August; and when protests over those and other acts of violence against Black Americans erupted across the nation.

Goodell posted a video in June conceding that the league had been late in acknowledging the problem. Since then, the league has taken largely symbolic steps like allowing racial justice messages in end zones and on helmets and T-shirts.

Some team owners have pledged money toward social justice causes or offered their stadiums as polling places for the November election.

"For me, it's about change," Chicago Bears tight end Jimmy Graham said. "Obviously, it's a hot topic. And it needs to stay a hot topic until some legislation's passed to hold people accountable and for total reform. That's all we're asking. I don't think anything's gonna stop until it happens."

Photos: Protests across the NFL Sunday

Scenes from across the league as players offered gestures in support of racial justice: 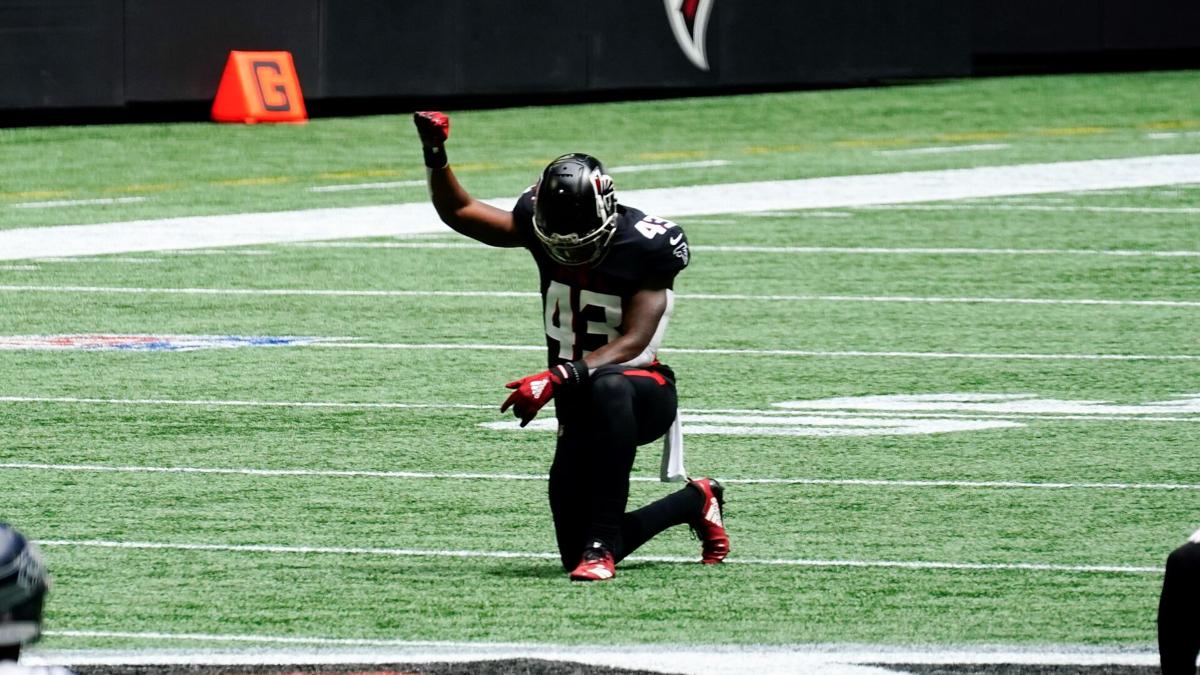 Players kneel in remembrance of Rep.. John Lewis, D-Ga., during the first half of an NFL football game between the Atlanta Falcons and the Seattle Seahawks, Sunday, Sept. 13, 2020, in Atlanta. (AP Photo/Brynn Anderson) 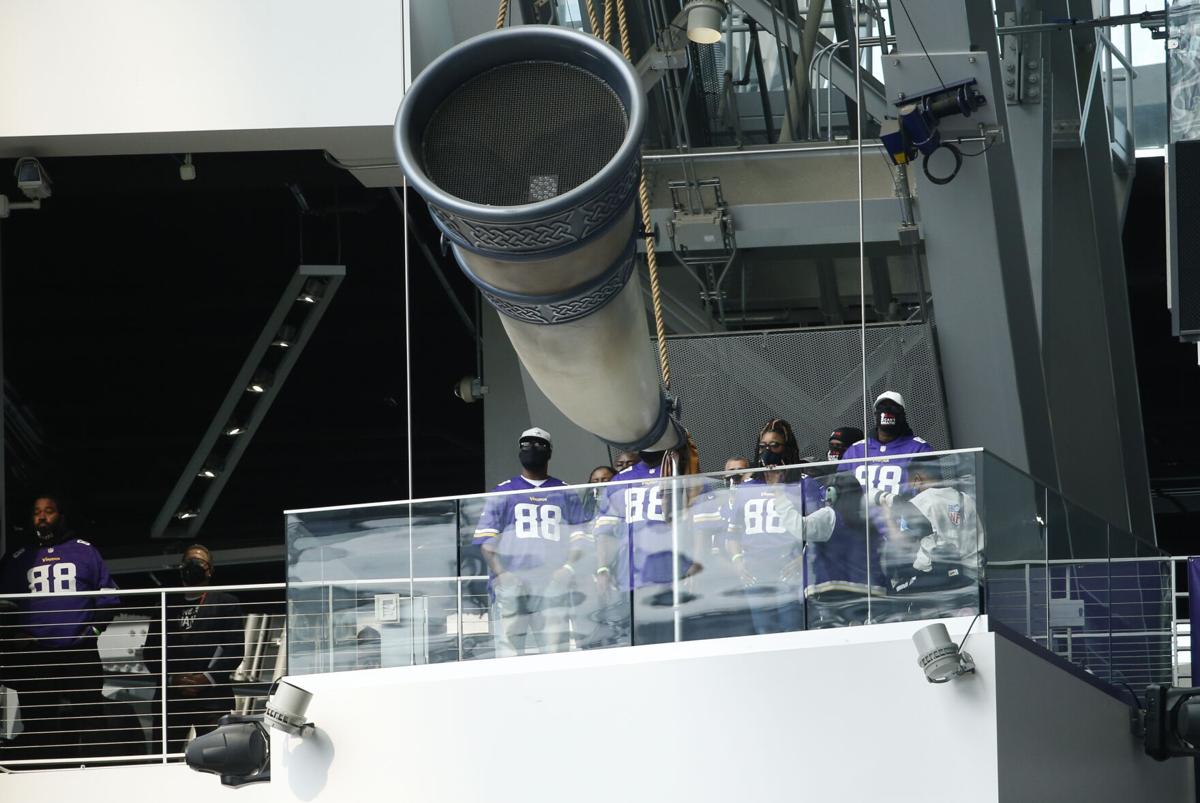 The family of George Floyd stand behind the Gjallarhorn before an NFL football game between the Minnesota Vikings and the Green Bay Packers, Sunday, Sept. 13, 2020, in Minneapolis. Floyd died during an arrest on Memorial Day in Minneapolis at the hands of four Minneapolis police officers. (AP Photo/Bruce Kluckhohn)