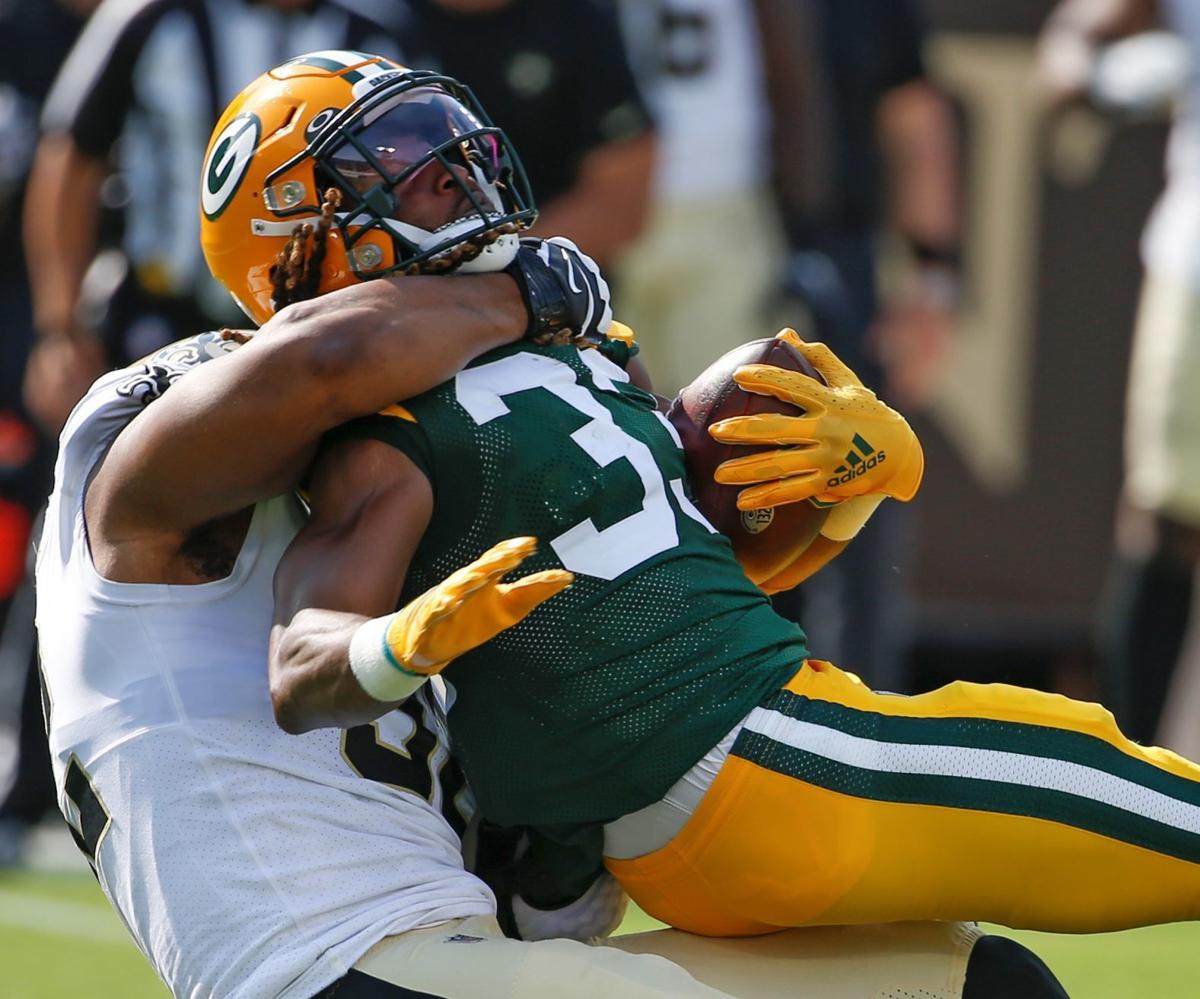 Packers running back Aaron Jones is stopped by Saints defensive end Marcus Davenport during the first half Sunday in Jacksonville, Fla. The Packers had just 43 yards rushing on 15 carries.

JASON WILDE For the Tribune

GREEN BAY — Aaron Rodgers has been known to be a bit snarky from time to time. So, it was hard to tell after Sunday’s 38-3 loss to the New Orleans Saints whether the Green Bay Packers quarterback was being facetious or serious.

But after the way the Saints defense completely owned Rodgers & Co. — and made last year’s No. 1 scoring offense in the NFL look like it had no idea what it was doing for most of the afternoon — it was reasonable also to wonder if New Orleans defensive coordinator Dennis Allen had given future opponents a playbook for how to stymie the Packers’ previously high-powered operation.

“We’ve got to go back to the drawing board a little bit and figure out, because this’ll be — I don’t know if everybody’s going to do this, and coordinators like to run their (own) stuff — but this’ll be the ol’ blueprint starting the season on the Packers,” Rodgers said. “Hopefully, we’ll see it a little more because we’ll have it figured out by next week.”

The blueprint line may have been sincere, that upcoming opponents — starting with the Detroit Lions Monday night at Lambeau Field for the home opener — will mimic Allen’s game plan and play two safeties deep to take away the Packers’ downfield opportunities while playing man-to-man defense with their corners and rushing with just four players instead of blitzing.

But it also might’ve been sarcasm, since that same word — blueprint — had been used during the 2019 season, when the Los Angeles Chargers shut Rodgers and the Packers offense down in a game midway through coach Matt LaFleur’s first season at the helm.

In that 26-11 loss to the Chargers, the Packers were outgained 250-50 during the first half; managed just 184 total yards; converted only 2 of 10 third-down situations; ran a measly 49 offensive plays; and committed five penalties (including three false starts and one delay of game flag). Rodgers completed 23 of 35 passes for just 161 yards with one touchdown and three sacks, despite the Chargers blitzing him only once all game.

Against the Saints on Sunday, the Packers were outgained 208-70 in the first half; finished with 228 total yards; went 1-for-10 on third-down situations; and ran only 38 plays before Rodgers was pulled. Rodgers finished the day having completed just 15 of 28 passes for 133 yards with no touchdowns and two interceptions for a quarterback rating of 36.8.

He also referred to that Chargers game in his postgame comments: “I felt like our energy was a little bit low. It felt a little bit San Diego-ish from a couple years ago. We just kind of needed something to get going, and it was the same type of thing — long drives on their side and us not executing (offensively).”

Asked about what the Saints had done to his offense, Matt LaFleur acknowledged his own mistakes as a play-caller but pointed directly to the Packers’ lack of a running game. Before waving the white flag in the fourth quarter, top running backs Aaron Jones and AJ Dillon had only carried a combined nine times for 28 yards.

“We definitely have to do a better job in the run game,” LaFleur said Monday afternoon. “We’ve got to be able to run the football, even given the limited opportunities that there were in that game.

“If teams want to play us in two-safety defenses and man us up on the perimeter and play versions of ‘2 Man’ (defense), you’d better be able to run the football. And if you don’t, that’s going to be a long day.”

The proof of the importance of the run game to the Packers’ offensive success is in their numbers from last season. While the NFL’s highest-scoring offense last year was terrific with situational football — the Packers finished No. 1 in the 32-team league with an 80% touchdown conversion rate in the red zone and finished No. 2 with a 49.4% success rate on third downs — their run game was crucial to setting up their passing game.

LaFleur found a way to keep a run/pass balance — running 990 offensive plays, the Packers ran the ball 443 times (44.7%) and Rodgers dropped back 547 times (55.3, including sacks), giving them the seventh-highest run ratio in the NFL during the regular season last year.

And, not coincidentally, they used play-action passes more effectively than anyone else in the league — as Rodgers had the highest passer rating of any quarterback (134.6) when throwing off play-action as he threw 21 touchdown passes and no interceptions on play-action pass attempts.

So regardless of whether was being serious or snarky, the Packers’ top priority heading into their “Monday Night Football” matchup against the Lions clearly will be to get the ground game going again.

“Nobody’s going to feel sorry for you, and you better not feel sorry for yourself. You’ve just got to get back to work,” LaFleur said. “Certainly, people that play that Dennis Allen style, I would definitely think that potentially that could be something that we would have to be prepared for, for (more of) those types of games.

“The one thing that we have to do as a staff is making sure that we have a great plan for and anticipate and try to stay ahead of the opposition, so that things like yesterday’s don’t happen.”

His entrance music was the most appropriate in the history of professional wrestling.

U.S. officials at intake centers in the United Arab Emirates and in Wisconsin have identified numerous incidents in which Afghan girls have been presented to authorities as the “wives” of much older men.

Packers running back Aaron Jones is stopped by Saints defensive end Marcus Davenport during the first half Sunday in Jacksonville, Fla. The Packers had just 43 yards rushing on 15 carries. 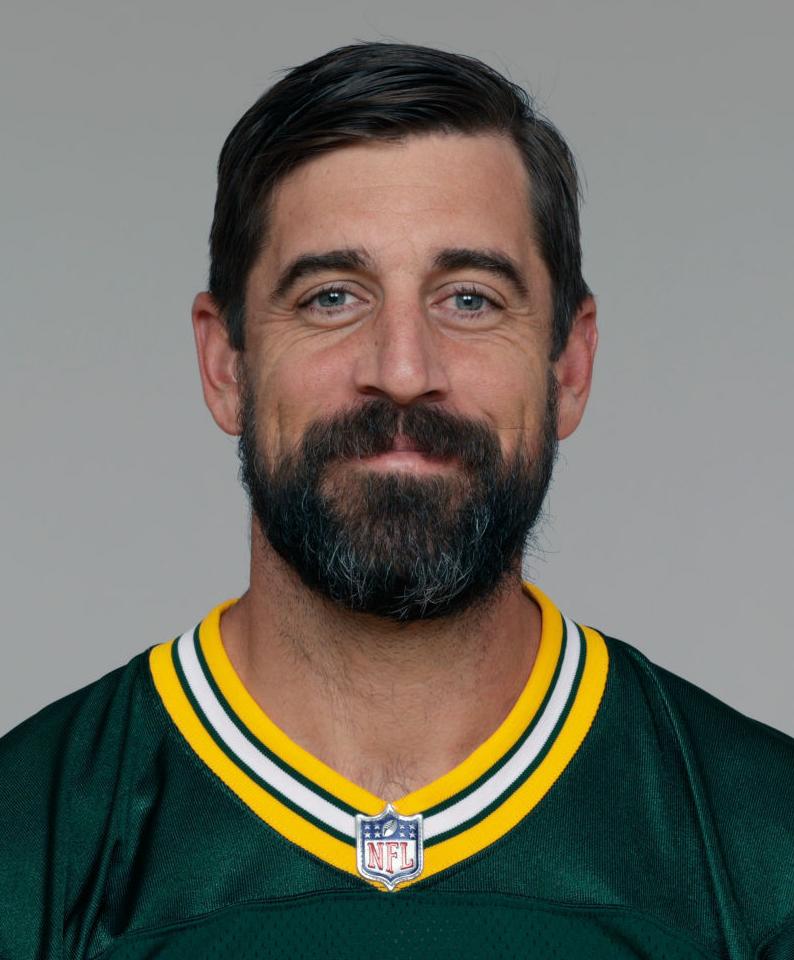 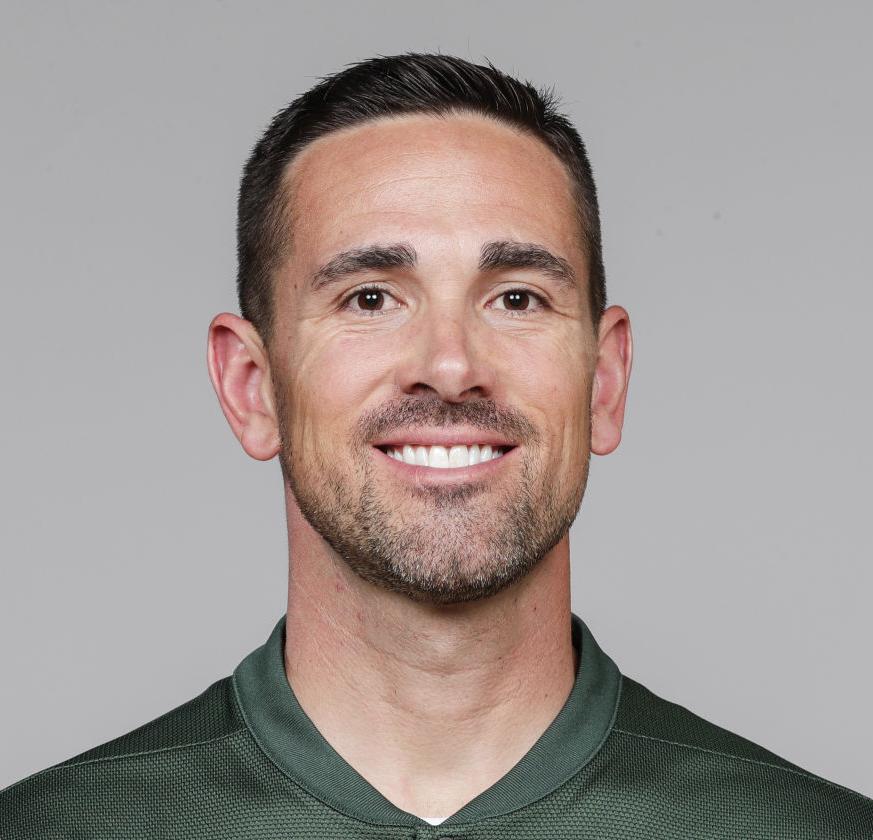